The Sony Xperia L1 is a pleasant enough phone to use but can't compete in the tough budget phone space.

What is the Sony Xperia L1?

Far from the latest Sony mid-ranger, the Xperia L1 is still available and often drops in price. But is it still worth the cash, or should you go for the Moto G6 instead?

I’ll say this for Sony – you know one of its phones when you see one. For years now, the Japanese manufacturer has stuck with a blocky design language all its own.

If you had to name a phone you’d least like dropped on your head from an upstairs window, it would probably be a Sony Xperia. Pushed to be a bit more specific, the Sony Xperia L1 might well be the phone you’d select.

This is a seriously hefty bit of kit at 151mm tall and 8.7mm thick, while it weighs a pocket-sagging 180g. It’s all-plastic, but unlike other such phones it doesn’t attempt to hide that fact, which is a laudable design decision.

There’s something reassuringly sturdy about the Xperia L1’s undisguised matte plastic rear panel and plain, gently curved sides. It also has the kind of sharp corners that would serve you well in the impending zombie apocalypse. 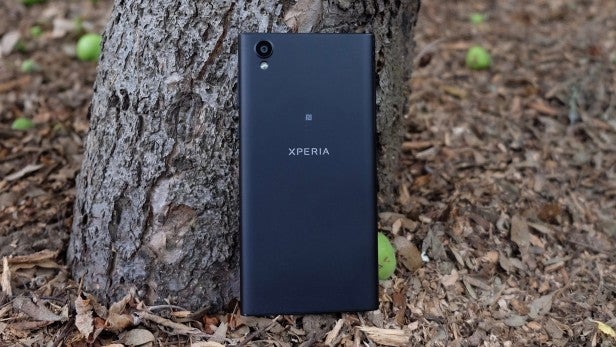 Another reason for the Sony Xperia L1’s heft is its typically huge Sony bezel around the display. The ones to the side aren’t so bad, but the bottom bezel is pretty sizeable for a phone with no home button, and the phone’s forehead is a veritable Frankenstein’s monster of a thing.

Utilitarian looks aside, the Sony Xperia L1 actually feels pretty nice in the hand. Its weightiness gives the impression of quality, while that matte plastic ensures that it won’t be slipping out of your grip any time soon.

The phone’s power button and volume buttons are placed in the usual position on the right-hand edge of the phone, but they’re plain and untextured, so it can be tough to distinguish them by feel alone. On the bottom edge you get the phone’s USB-C port – a welcome inclusion over micro-USB – and a solitary speaker; there’s a 3.5mm jack on top.

There’s one major hardware omission here: a complete lack of a fingerprint sensor. Both the Moto G5 and the Wileyfox Swift 2 have decent examples at an identical price, so there’s absolutely no excuse for this. Indeed, even the £85 Vodafone Smart N8 has a strong fingerprint sensor of its own.

16GB storage is pretty standard for a phone of this price, and you can expand that through a microSD slot hidden under a slightly clunky flap.

Sony has been one of the bolder manufacturers when it comes to pushing screen technology in recent times. At the top end with the Sony Xperia XZ Premium, it’s just about the only smartphone maker pushing 4K, when most of the rest have settled on 2K (aka QHD).

It’s a shame Sony doesn’t show similar boldness at the lower end of the market. The Sony Xperia L1 has a 5.5-inch IPS display, but it comes with only a 720p resolution.

There’s nothing inherently wrong with such a spec – the iPhone 7’s screen isn’t far off 720p, after all – but when such a screen strays over the 5-inch mark you can start to see the individual pixels. 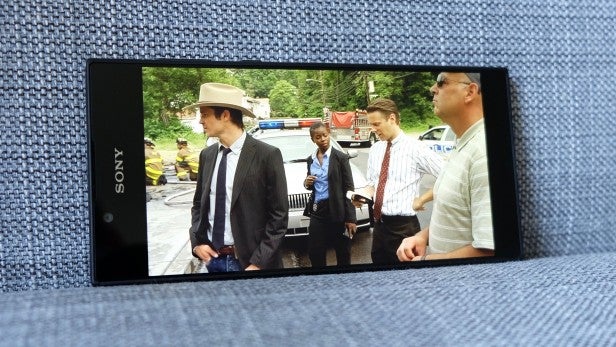 Going back to those aforementioned rivals, the Wileyfox Swift 2 is 720p but in a more compact – and thus more pixel-dense – 5-inch form factor, while the Moto G5 goes one better with a 5-inch 1080p screen. Both are smaller, but both are sharper.

It’s a shame, because in every other respect the Sony Xperia L1 screen is pretty good. It’s bright and clear, while colour reproduction is strong for a budget phone. Sony likes the tone to be icy-blue by default, but you can tinker with the white balance in the Settings menu if you’re after a warmer feel. Viewing angles, too, are excellent.

We don’t expect phones to be super-quick at this price point, but we’re past the time where the Sony Xperia L1’s mediocre performance could simply have been shrugged off. Not when the likes of the Moto G5 and the Wileyfox Swift 2 kick along nicely with capable 4-series Snapdragon processors.

Using the Xperia L1 isn’t a bad experience, but there’s a general wallowy feel to even simple tasks. There are small but noticeable pauses when dragging down to bring up Sony’s universal search function, or when swiping to the left to bring up Google Now. The camera seems to take seconds to load up.

It doesn’t take long to identify the culprit: a MediaTek MT6737T CPU, which is a truly low-end piece of silicon. It’s pretty much the same chip – although clocked slightly higher – recently employed in the Vodafone Smart N8, a phone that costs around half the price.

You get 2GB of RAM to back up that modest CPU , but that’s pretty much the minimum for any Android phone shooting for a smooth experience. 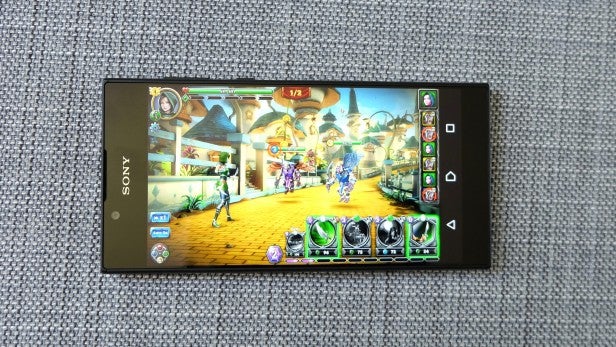 The Xperia L1’s setup does ensure competent gaming performance, though. Guns of Boom’s slick online FPS action runs reasonably well, barring a few stutters when the action heats up, while Reckless Racing 3 and Oz: Broken Kingdom were jittery but playable during my time with the phone. 2D efforts such as Guns Of Mercy and Wayward Souls ran flawlessly, as you’d expect these days.

A Geekbench 4 multi-core score of 1881 shows just how short the Xperia L1 is of its main rival, the Moto G5. Motorola’s current budget king managed a score of 2440.