The Xperia 10 Plus is on paper a solid mid-range phablet, featuring an entertainment optimised screen, solid camera setup and reasonably clean Android install. But issues with its performance and battery life impeded its overall appeal. There are also better value smartphones available with similar specs that cost way less than £350.

What is the Xperia 10 Plus?

The Xperia 10 Plus is the big brother to Sony’s mid-range Xperia 10, Sony has worked hard to keep up with the “bigger is better” trend sweeping the flagship end of the market, attempting to pull the same trick as Samsung with its Galaxy S10 Plus and Huawei with the P30 Pro.

The result is a handset that offers a slightly nippier processor, more generous battery and improved camera optics, compared to its smaller sibling. This, plus the Xperia 10 Plus’ entertainment-focused custom 21:9 aspect-ratio screen makes it look like a solid choice in a segment of the smartphone market that’s currently underserved.

Sadly, issues with performance, poor battery life and atypical dimensions stop it from being the “shut up and take my money” mid-range phablet we’ve been waiting for. 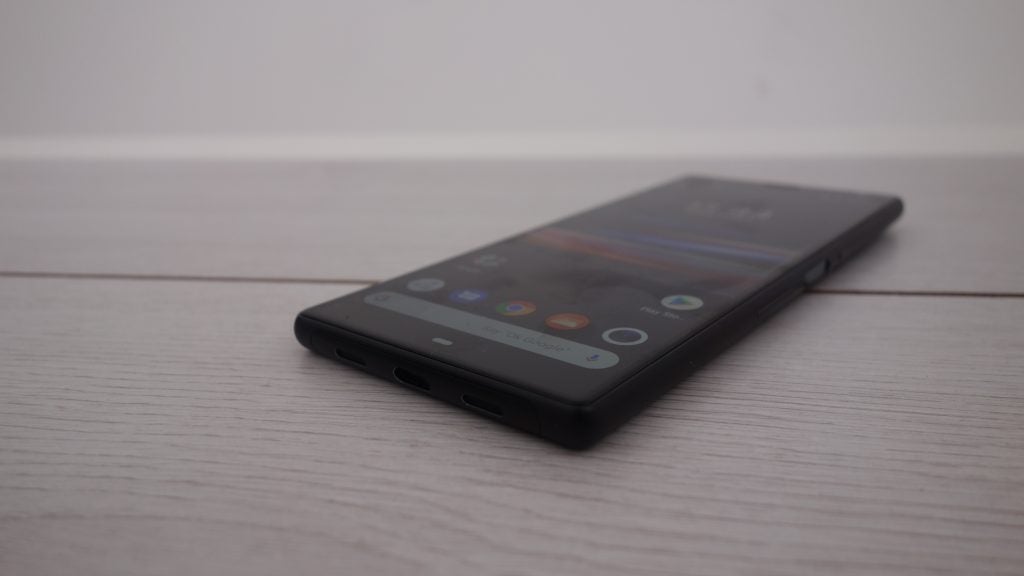 The Xperia 10 Plus looks like a blown-up version of the standard Xperia 10, sporting the same unibody, boxy dimensions that Sony first debuted over half a decade ago. The design proved marmite in the Trusted Reviews office.

Personally, I think the boxy dimensions and unibody plastic chassis feel a little retro by today’s standards. The Moto G7 Plus is significantly cheaper and has a far more alluring mixed metal and glass design in my mind.

The black colouring does at least give the Xperia 10 Plus a slightly more sleek look than the grey finish of the Xperia 10 I tested.

Overall, though, the positives and negative attributes of the regular Xperia 10 return with the Plus. The inclusion of a 3.5mm jack is a key positive, especially considering the Xperia 10 Plus’ support for High-Resolution Audio with DSEE HX and LDAC.

The atypical button and fingerprint scanner placement can make it a little uncomfortable to use, however. The fingerprint scanner sits in the middle of the Xperia 10 Plus’ long right-hand edge, below the power button. This makes it fairly tricky to reach with your index finger. Once again, I can’t help but feel that the handset’s rear – the choice of the majority of phone makers – would have been a better location for it. The volume controls that sit under the scanner are also tricky to reach one-handed.

The larger dimensions and unusually long design of the Xperia 10 Plus exacerbate these issues, making the device uncomfortable to use on the move.

The speakers’ position along the bottom edge also remains a minor annoyance. Audio quality is solid, and meatier than that of most mid-range phones, but it’s all too easy to accidentally block the units when gaming or watching video content. 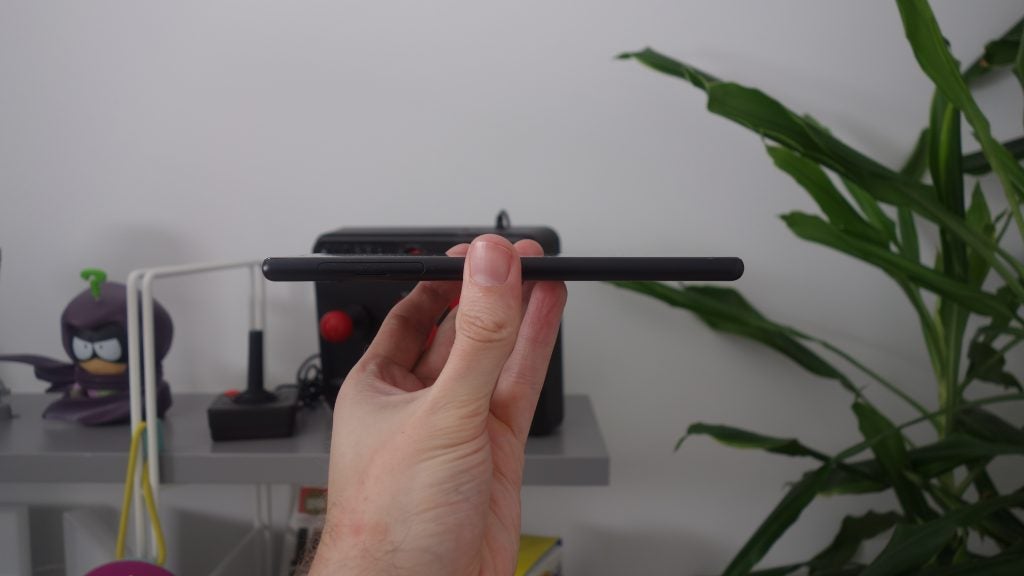 The screen’s 21:9 aspect ratio remains a unique selling point for Sony’s latest line of Xperia smartphones, and in theory makes the 10 Plus a great handset for Netflix binging.

According to Sony, this is because most modern movies are mastered in 21:9, and the extra screen real-estate lets you “see even more of the apps and content you love”. In real-world testing I’d say that there’s definitely much truth to this claim.

Modern movies on Netflix take up the whole screen and look fantastic, giving a true widescreen experience on mobile. The Plus’ larger 6.5-inch screen also feels like a great step up on the regular 10’s 10-inch offering. The longer display also works well with scrolling apps, such as Twitter and Facebook, allowing you to see a greater number of posts at any one time.

But as is the case with the regular Xperia 10, not every app is optimised for the extra screen space. Games regularly get clipped, as do videos on smaller platforms such as CrunchyRoll and Shudder.

Thankfully, aside of these issues, the screen is pretty good considering the Xperia 10 Plus’ price. The FHD+ resolution isn’t the highest, even in the mid-range market, but it’s more than sufficient for regular use. Icons and text look uniformly sharp and you’ll struggle to spot individual pixels.

Colour temperature and whites are also nicely calibrated to the naked eye. Whites don’t have the yellowish or blue tinge you’ll spot on most competing mid-range phones. Colours are vibrant without being oversaturated. All-in-all, you’ll struggle to find a better smartphone screen at this price. 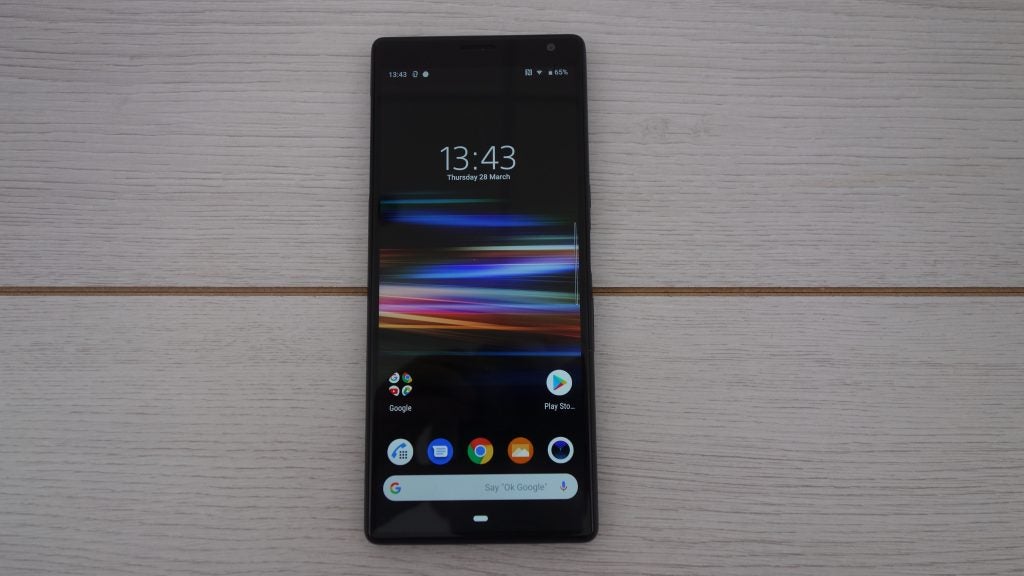 Sony’s approach to skinning Android has come on leaps and bounds in recent years. As a result, the version of Android 9 that features on the Xperia 10 Plus is relatively clean. Sony hasn’t radically changed any of the Settings menus, and has made it so you can pick and choose which of its custom applications you want to install during the setup process.

This means, in theory, that it should be easy for Sony to upgrade the Xperia X10 Plus to newer versions of Android in the future, since it won’t have to rework the phone’s custom code to work with Google’s.

In theory, the clean Android install should also help to improve performance by diminishing the number of custom background processes running at any one time.

Sadly, performance remains a stumbling block for the Xperia 10 Plus. The performance generally matches the experience you’ll get on the Moto G7 Plus, which has similar internals. Both phones run using Qualcomm’s mid-range Snapdragon 636 CPU and 4GB of RAM.

This translates to performance that’s generally fine for regular use, and a step up on the Xperia 10. Multi-tab web browsing works well and, although I did experience occasional stutters, it reacted to incoming commands just fine.

However, there is noticeable lag in demanding triple-A games such as PUBG. Apps are also slower to open than I’d like. On a phone at the Moto G7 Plus’ price such performance compromises are likely, but I’d expect more from a handset costing £350.

Real-world impressions of the Xperia 10 Plus’ performance rang true when it was put through Trusted’s standard suite of synthetic benchmarks. You can see how the Xperia 10 Plus scored against its smaller sibling and the Moto G7 Plus in the table below.

Sony has upgraded the main camera setup of the Plus variant of the Xperia 10 with a dual 12-megapixel f/1.75 wide-angle sensor and an 8-megapixel f/2.4 snapper. The regular Xperia 10 has a dual 13-megapixel/5-megapixel main camera by comparison.

Although this is by no means industry-leading – it’s a far cry from the advanced tri-camera setups you’ll find on flagships such as the Huawei P30 Pro and Galaxy S10, for example – but for a mid-ranger I was reasonably impressed with its performance.

In regular light the Xperia 10 Plus takes decent photos. On occasion, exposure levels and colour temperatures could look a little unrealistic, but they were universally of a high enough quality for sharing on social media.

In low light the Xperia 10 Plus’ camera performed far better than its smaller sibling. Photos taken on the Plus in conditions that rendered the regular Xperia 10’s camera unusable, were eligible and noticeably less noisy.

Let’s be clear, you’re not going to get Pixel 3-level low-light quality. Nevertheless, I found the Xperia 10 Plus could at the very least take usable photos in dark locations, such as bars, that were blissfully free of pixelation and noise. The Portrait mode, like the Xperia 10, is also accurate enough and works fine until you blow up photos on big screens, where you’ll spot some blurring and artefacts.

This is great, but once again, performance issues hamper the overall experience. The camera app is plagued by slow shutter speeds. Regularly there was a huge delay between pressing the on-screen shutter button and a photo actually being taken. This makes it all too easy to miss your shot, especially if it’s a moving target.

I’m also not a big fan of the ability to capture photos in 21:9. Although not inherently a negative – it’s easy to change the aspect ratio using the camera app’s manual controls – but photos captured in 21:9 generally look awful when shared on social media.

You can see a selection of photos taken on the Xperia 10 Plus below. 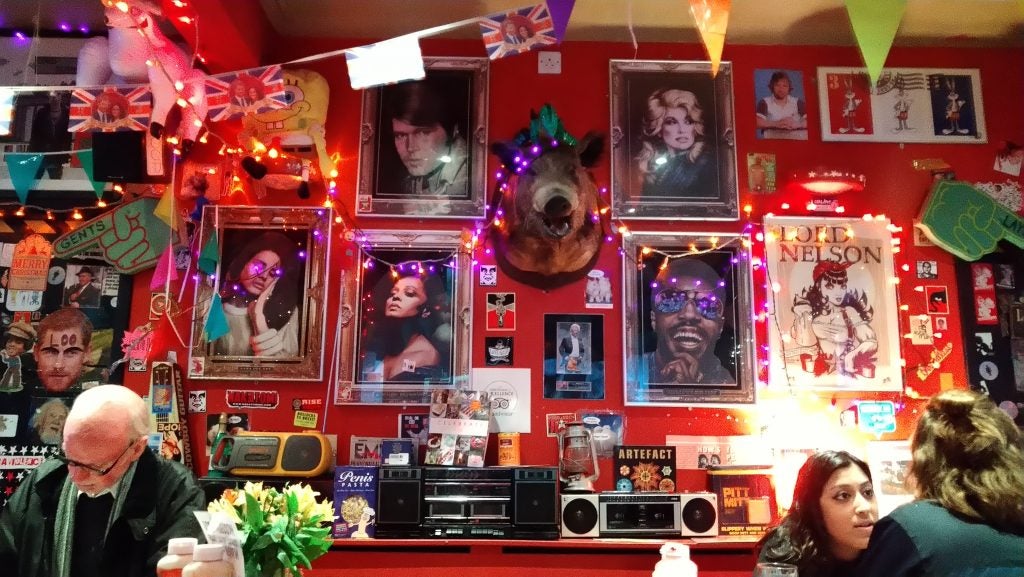 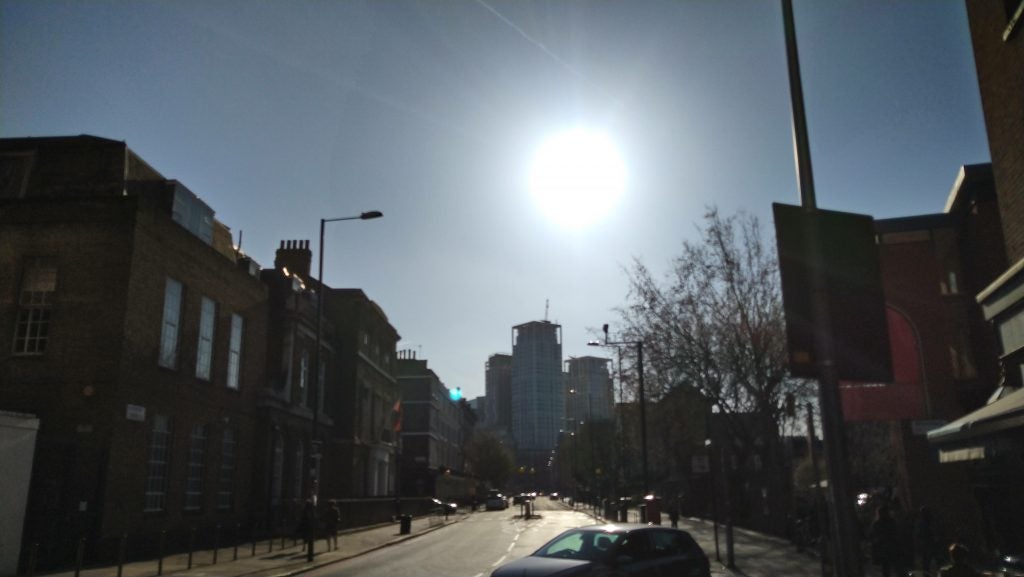 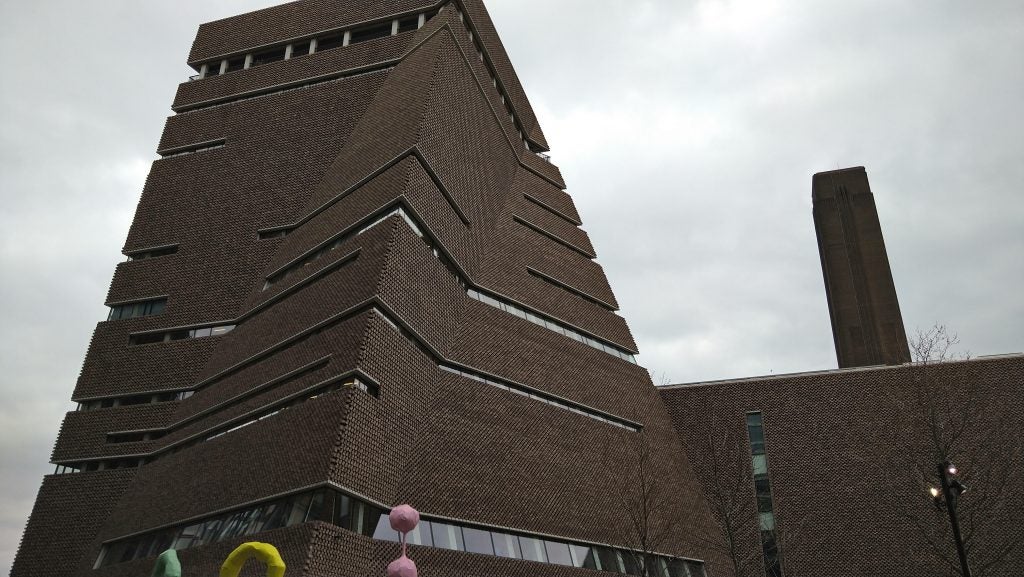 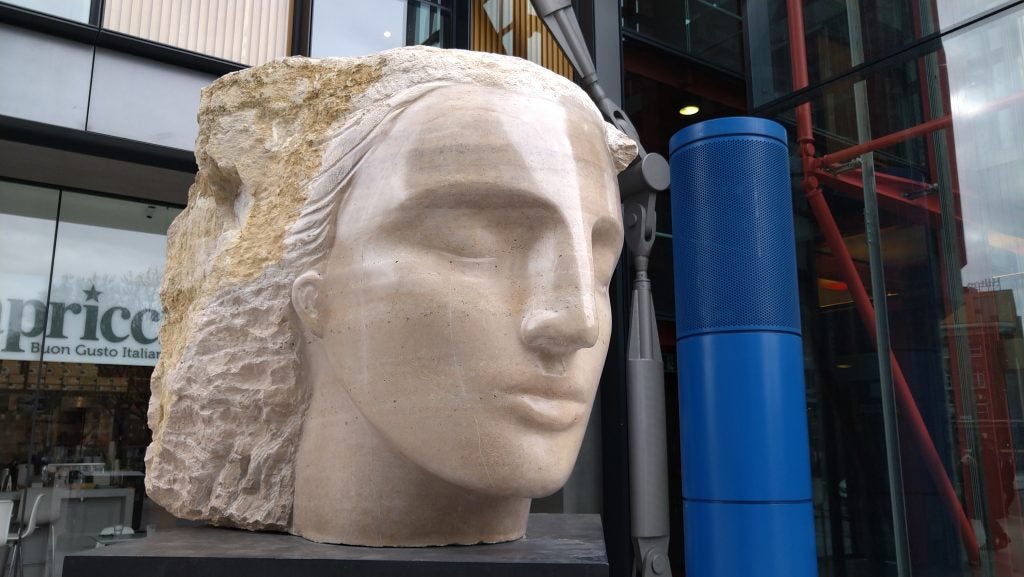 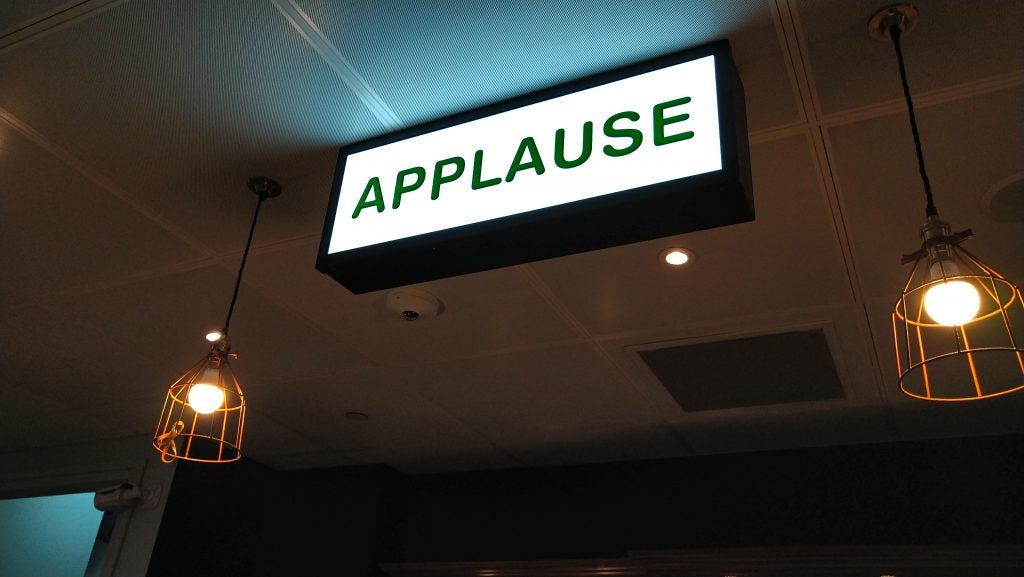 Unplugging at 8am, with regular use it was ready for a top up by 9pm. Regular use entailed listening to music on the commute to and from work, regularly checking my incoming messages and social media feeds, the odd web search and PUBG session, plus taking and making a few calls.

Video streaming and gaming put an even bigger strain on the battery. The Xperia 10 Plus lost an average of 14-18% of its charge per hour whilst streaming video, which is pretty poor. Most phones lose around 10-12% running the same test.

Playing demanding 3D games yielded similar results. Running PUBG, the Xperia 10 Plus lost between 20-24% of its charge per hour.

Thankfully, the addition of w/ PD (power delivery) fast-charging makes it easy to top up the Xperia 10 Plus’ battery on the fly. 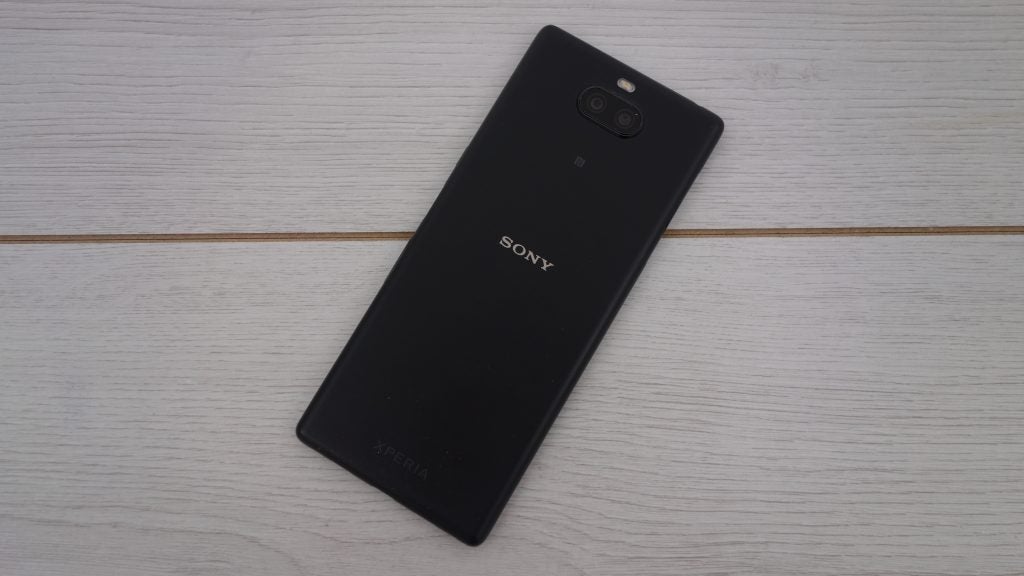 Should I buy the Xperia 10 Plus?

If you want a big-screen phablet, but don’t want to spend close to £1000 for the luxury, then the Xperia 10 Plus is one of the only choices around.

For £350 you get a solidly built, big-screen phone with a wonderfully clean install of Android, plus a custom 21:9 aspect-ratio screen that’s bespoke made for Netflix binging. The camera’s low-light performance isn’t to be sniffed at either.

However, its overall appeal is let down by its poor performance – which doesn’t match similarly priced phones – and the slightly cumbersome-to-hold design. The Moto G7 Plus offers similar core specifications and is over £80 cheaper. It remains our mid-range Android smartphone of choice as a result.

The Xperia 10 Plus is a solid mid-range smartphone. But it’s too expensive.