When Digital Audio Broadcast (DAB) radio tuners first went on sale in the UK, they were limited to high-end expensive hi-fi separates. Now there’s a whole range of products from a number of manufacturers and it’s no surprise that recently sales of digital DAB radios overtook those of analogue in the UK.


One of the key benefits of DAB is that it provides clear digital sound, though the marketing talk of it being CD quality is not really true. It uses similar compression to MP3 files and the sound quality level will vary between stations depending on the bit-rate used. Some such as BBC Radio 3 use 192Kbps but most use 160 or 128Kbps. This squeezing of bandwidth is done so broadcasters can give you more stations, many of which are broadcast exclusively on digital, though if asked, most people would probably choose higher quality. What is essentially true though is that with a clear signal DAB is superior to most analogue radios, delivering better sound and more stations. 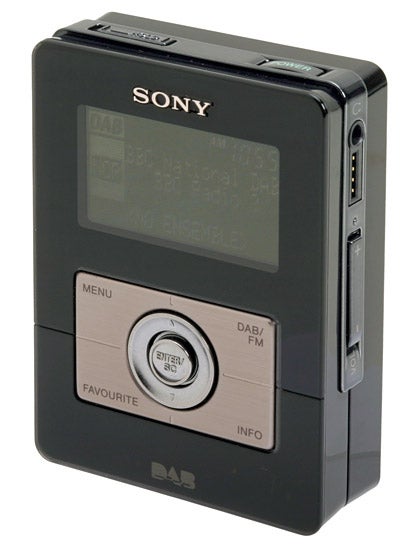 Sony’s entry into DAB last June was a shot in the arm for the format, and it made its first entry into the market with the breadbin like Sony XDR-S1. Now it’s released its first mobile DAB radio in the guise of the equally snappily named XDR-M1. This is set to give some serious competition to the current best selling DAB radio, the Pure Digital Pocket DAB 1000 and others such as the S Series Personal DAB Tuner by Ministry of Sound.


The Sony has an immediate advantage in that it’s the smallest pocket DAB tuner yet released. It’s only 88mm high but a fairly chunky 21mm thick, and while we’re at it, 60mm wide, which makes it feel nice and snug in the hand. It’s also fairly lightweight at 119g. Of course what would be great is when technology has progressed to the stage when DAB tuners can be integrated in MP3 players and phones, but in the mean time, this is as good as it gets.


The Sony is doubly attractive as it offers a good ‘ol FM Tuner as well as DAB, ensuring that it doesn’t turn into a Sony badged paperweight in those areas where you can’t get DAB. This means that you can take it overseas to Europe, where DAB coverage is even patchier than it is in the US, where inevitably they have a completely different and incompatible version of digital radio. Furthermore the XDR-M1 can receive DAB signals broadcast on Band L as well as Band III. The latter is used in the UK and most European countries that broadcast DAB, but Band L is used by some German stations and in a typically idiosyncratic manner, exclusively in France.

The unit is powered by two AA batteries, and Sony claims that it will last up to ten hours. This actually isn’t that impressive, with the Pure Digital Pocket Dab 1000 offering up to 16 hours listening. This means that you’ll go through a fair few batteries depending on use. I would have preferred it having a built-in rechargeable battery with AAs used as an add-on to extend its staying power. You can however, plug in a power adaptor to run the player from a wall socket.


Styling wise, Sony has pretty much hit the mark, with a smart black casing with the Sony logo in silver at the top and the DAB logo at the base. The interface is controlled by four buttons and a joystick that moves up and down, and these sport a silver finish that contrasts well with the black casing. 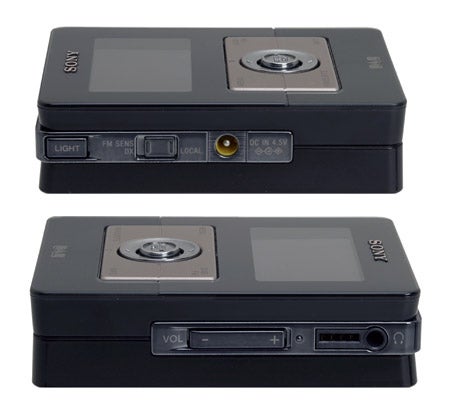 The killer though is the display with its cool white on black dot matrix lettering. Though it looks good, it actually isn’t the easiest screen to read without pressing the backlight, but this can’t be kept on and the effect only lasts for a few seconds. What’s unique about the Sony though is that the screen displays four lines of text so you can really get the full benefit of DAB’s informational service.


The top line of the screen tells you if you are tuned in via DAB or FM and usefully, the time. On the left is a signal strength indicator. Underneath this the display shows the transmitter you’re receiving from, the station you’re tuned into, its genre, and underneath this, any scrolling text information the station is sending out. Pressing the info button gives you further data with each button press, such as the (usually irritatingly low) bit-rate the station is broadcasting at, the signal level out of 100, the frequency the station is broadcasting on, and more text info. Some of this info is genuinely useful, such as the DJ currently on-air, the title of the track playing, the one coming up and the number to text the station on.


One irritating feature though is the loud beep that occurs with every button press, and I couldn’t see an option to turn it off.


The first time you start the player it will automatically set itself up and scan through the DAB frequencies to pick up stations. Our Ascot offices are something unfortunately of a coverage blackspot for radio, TV and mobile phones so it was no surprise it couldn’t get a decent signal with either DAB or FM. At home, closer to London, it far much better though the signal was only strong when I was near a window.

As with most portable radios the aerial is built into the remote control cable. This has a sturdy clip on the back and features a hold button, though oddly this only works for the remote itself and not the radio, which has its own hold switch.


Moving between stations is done by using the joystick. Unlike with analogue FM there’s a small pause when you switch stations as it locks onto the signal, which might bother some. You can choose to move between stations in sequence or just between those you’ve placed in your favourites list. This is done by pressing the menu button, scrolling to the favourites option and selecting save – a bit of a long winded process. 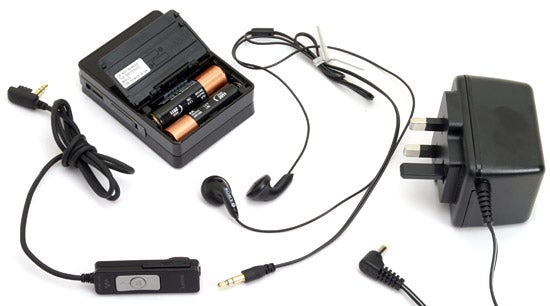 Sound quality on the XDR-M1 is good. Having both DAB and FM on one unit makes it fairly straightforward to compare sound quality between the two. Assuming signal strength for both is good, I preferred the DAB signal for its absence of background noise. The sound did have the same compressed feel to it as an MP3 track, which is inevitable but to me at least, this was preferable to the ever present background hiss on FM. The sometimes brittle sound is also nicely filled in using Sony’s MegaBass, but this will be an extra drain on battery power.


Many descriptions of DAB, state that you either get a signal or not at all. This is true but somewhat misleading as in poor signal areas you get sound drop outs every few seconds, which is more annoying to listen to that a slightly hissy FM signal.


But when the DAB signal was strong the Sony sounded great even when plugged into a set of THX rated Logitech Z-680’s, which are fairly unforgiving of poor audio sources.


Overall though, the Sony XDR-M1 does the business. What’s surprising though is that Sony has let an opportunity go by to put a memory stick slot in one of its products, as the ability to pause, wind and record radio would have been a really nice touch. Maybe next time.


The XDR-M1 is a great little pocket DAB player. It’s the same price as the competition but offers more style and better features with Band-L DAB and FM reception. The unspectacular battery life is a downside but as far as pocketable DAB goes, the Sony is the best unit around right now.