Since their arrival, the WF-1000XM3 have been one of our favourite wireless earbud pair since, well, the Sony WF-1000X.

But the competition has hemmed the Sony earbuds in from every side, with Apple, Bose, Grado, Sennheiser, Shure and Technics launching their response in the hopes of assailing the WF-1000XM3.

In the time they’ve been on sale the Sony WF-1000XM3 have improved through firmware updates, as well as a price drop to make them even better value than before.

Available in black or silver (with fetching gold styling), the Sony WF-1000XM3 skew away from the ‘ear trombone’ look of a Grado GT220 or stem design of the AirPods Pro. They sit in the middle of the two with a sculpted look that’s relatively compact (and nice). I wouldn’t describe the fit as the tightest, but it is stable. There’s no sense they’d slip out, but they do require a few pushes to keep them seated. 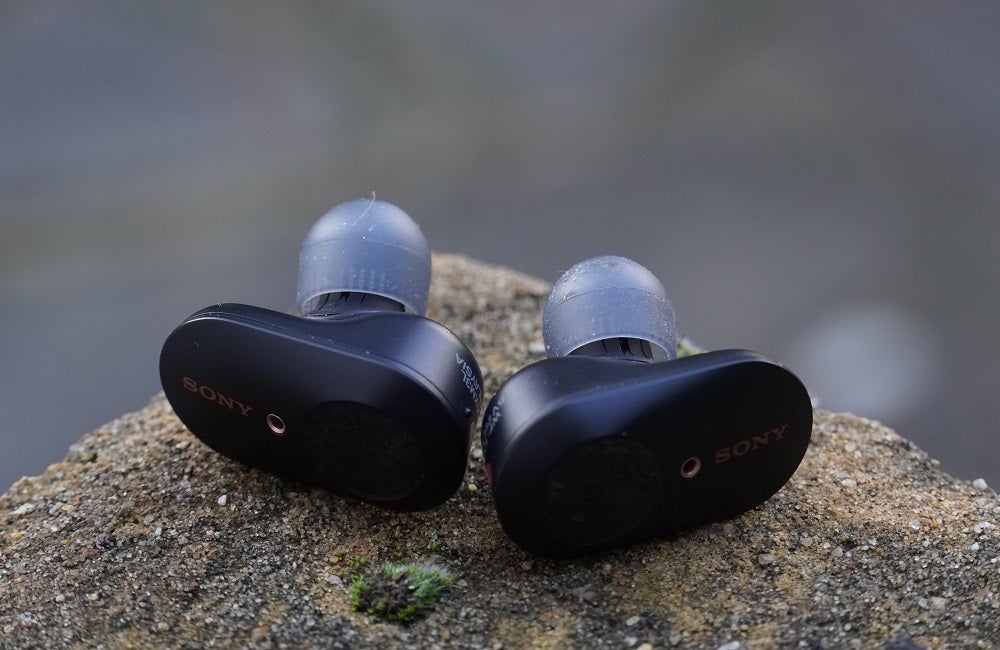 Inserting them is like a capsule rendezvousing with a space station. They slot in with the Sony logo pointing down, before a twist points them forward. Sony told me it had studied the shapes of thousands of ears with the aim of producing a pair that sits snugly and comfortably – and they do – though I find the rubber surface of the earbuds’ contact point produces an oily sensation from time to time. If the default ear-tip doesn’t fit, there are several sizes to play with.

While the WF-1000XM3 resembles the WF-1000X, various changes have been made. They look smarter: the transparent tip of the original has been replaced by an LED light indicator, while there are no longer wing-tips or physical buttons. For operation, capacitive touch controls are used; the functions of which can be customised through the Sony Headphone app. You don’t have to press down hard either – a simple tap is enough.

As they came out in 2019, the WF-1000XM3 shares the HD Noise Cancelling Processor QN1e chip that also featured in the WH-1000XM3 over-ears (since replaced by the WH-1000XM4). There’s a chip in each earbud that features a digital noise-cancellation engine, DAC and analogue amplifier, plus a 24-bit signal processor that combine to suppress noise and refine the audio.

Noise cancellation is excellent, but they’ve been bested by the recent Bose QuietComfort Earbuds and WF-1000XM4 Nonetheless, the WF-1000XM3 are great at blocking out ambient sounds whether that’s on a plane, train or automobile. Walking around a city and noises are significantly reduced – but the Bose are even more stifling.

Wireless connectivity was a sore point on the WF-1000X. In response, Sony optimised the wireless antenna for a wider coverage and stronger signal. I’ve not experienced any significant dropouts using the WF-1000XM3, no doubt also helped by a new Bluetooth chip and a change to simultaneous transmission of audio to both earbuds.

At launch there wasn’t a way to control volume on the earbuds (you had to fish out your mobile device). That’s been rectified via an update that enables on-board volume control.

Customisation of what’s assigned to the touch capacitive panels can be edited in the Headphone app. So, for example, you can choose to have Google Assistant just a mere tap away on the right earbud, with the left for playback – useful if you’re left-handed.

The Headphone app is also where the equaliser, sound quality, noise cancellation et al can be tweaked. You can tinker with the effectiveness of Ambient Sound Control, sliding through the various options to let in as much as sound – or as little – as you want. It’s great to have, especially in busy cities.

It’s useful for automating the noise cancelling process without having to jump into the app, but there are times where it becomes intrusive. The slight delay in recognising your actions (which is fine, to be honest) is exacerbated by a “ping” sound and brief pause in playback. If you’re moving around a lot it gets old very fast. Thankfully it can be turned off.

Other features include auto-play and pause: Google Assistant and Alexa support, quick charging (10 minutes for 90 minutes of playback); Quick Attention Mode drops the volume down for when you’re having a conversation, and there’s a microphone in each earbud, so you can make or receive a call with both earbuds or just one.

There’s no support for LDAC or aptX Bluetooth. There’s also no IP rating, so take that as confirmation the WF-1000XM3 are ill-suited for gym workouts and aren’t fans of water/rain.

Our review of the WF-1000X was when the true wireless earbud market was still in its infancy. Few brands took the ‘sound first’ approach that dictated Sony’s entrance in the market.

And with the market approaching a level of maturity, the Sony WF-1000XM3 still stand out as one of the best-sounding earbuds. They remain a nuanced and subtle listen, with a presentation that’s measured, balanced and very musical.

In some ways the QuietComfort Earbuds out gun them, delivering more power and a bigger sound. But the WF-1000XM3 remain the more organised in how it puts together the soundstage – less about power and more about refinement.

They’re plenty versatile too. I’ve listened to ‘50s pop, ‘90s R & B, Dance, nu metal, jazz, Motown, rock ‘n’ roll, punk rock and classical music, and the WF-1000XM3 prove themselves to be capable of handling a variety of genres without becoming stuck.

John Wasson’s Caravan offers a sumptuous flow, with brass instruments well articulated, as well as a depth to the soundstage and stereo imaging that makes it easy to sense where each instrument is. It also keeps up the track’s dynamics, never dragging or rushing.

The midrange is an area where there’s plenty of detail to discover, but more than that, there’s a subtlety to how the WF-1000XM3 performs. They reveal a track’s character without being showy. If a track requires some muscularity, the WF-1000XM3 can produce more oomph though the bass is more tasteful than overpowering.

A play of Fleetwood Mac’s The Chain and the vocals have a clarity and emotion that’s hard to resist. A switch to Alan Silvestri’s Portals (Avengers: Endgame) and the Sony WF-1000XM3 create a wide soundstage, exhibiting a flair for the dramatic as the track builds to its conclusion. Turn it up and there’s little suggestion of harshness, distortion or loss of composure. They’re a great listen if you love music.

You want musical sound: Have we mentioned how they sound? These Sony earbuds are versatile pair of earbuds, and we really appreciate how refined its midrange performance is. They are better-sounding models now available, at its current price they’re a more affordable option.