Time was when a Walkman was literally your only choice of portable music player. Unfortunately it’s not 1978 any more and while they have their detractors, Apple’s iPods have become the de facto benchmark against which all other portable media players must compete. That the latest iPod nano differs from its predecessor only by the addition of a video camera (which, while cool, is a bit gimmicky) and a shiny exterior speaks volumes about how far ahead of the competition Apple is, in many respects.


Nonetheless, those not willing to be tied to iTunes, or who value sound quality over a very slick user interface will recognise the advantages Sony’s Walkmans offer over their rival. And that’s leaving aside the often massive price hike, capacity for capacity, with which Apple’s products are encumbered. 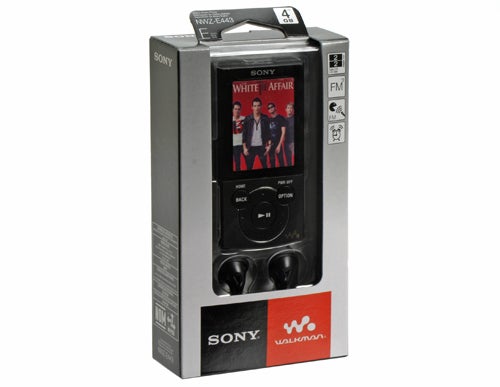 The E Series, for example, which is now Sony’s closest rival to the iPod nano as the S Series has lost its way somewhat (really Sony, speakers?) starts at around £65 for this 4GB NWZ-E443, with the 8GB NWZ-E444 and 16GB NWZ-E445 available for about £80 and £100 respectively. That beats the iPod in two respects. First, the entry point for the E Series is lower, if you don’t mind the limited capacity and second for the same amount of storage, Sony is asking a lot less.


It’s not like the E443 feels cheap. It might be made of plastic, but there’s a solidity that inspires confidence, so that even if you’re clumsy enough to drop the player, it should survive the experience unscathed. A metal finish would, of course, have been preferable, but savings have to be made somewhere. 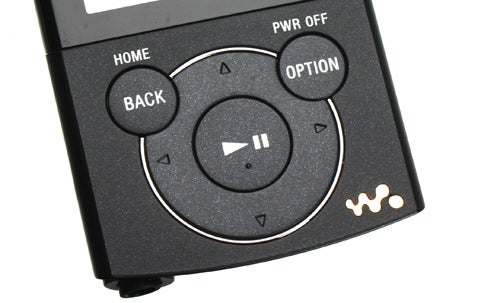 I much prefer the physical controls to the touch-sensitive ones of the Samsung YP-Q2. Being able to reach into a pocket to pause a track, or change the player’s volume, not to mention being sure each press is acknowledged as such, makes the E443 far less frustrating to use than Samsung’s player.


Anyone who’s used a Sony player – X Series excluded – in the last couple of years will be familiar with the E443’s menu system, which is just as intuitive as ever. Annoyingly the player is as picky as ever when displaying album art, so if you’ve embedded a png, for example, you’ll be left with a placeholder icon on the player. It’s a minor criticism really, though, as despite being able to display images, the E443’s 2in 240 x 320 pixel display is too small and too low resolution to make the feature worthwhile.

Although you can play mp4, h.264 and WMV videos, the small screen size and resolution makes it a headache inducing experience. As you might expect, even though BBC iPlayer downloads will playback just fine, squinting at the screen for an entire episode of Antiques Roadshow is more than you’ll want to suffer. 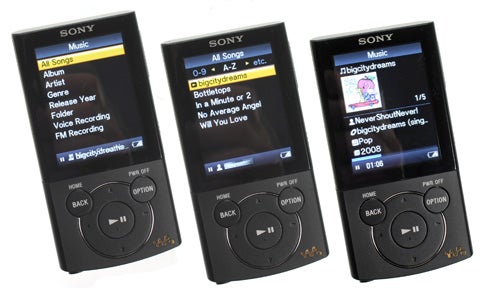 Less frustrating is the software-free management of files on the E443. Sony supplies music management software on the player itself, but anyone who installs it is surely mad because drag and drop transfer is far, far easier. Besides, Windows Media Player’s syncing abilities are more than good enough if you are inclined towards automated music management, anyway. The only downside is the slight delay as the E443 searches through your files each time it’s powered on, but it’s a concession worth making.


The single most annoying ‘feature’ of the E443 is its proprietary connector. Sure, this means it will fit into older Sony Hi-Fi systems that have docking ports, but when there’s plenty of space for a mini-USB port its more than a little annoying that Sony has seen fit not to provide one. Apple get’s away with it because iPod docks are more than just misshapen USB ports but the E443 has no such defence and Sony seriously needs to fix this with the next generation of Walkmans. 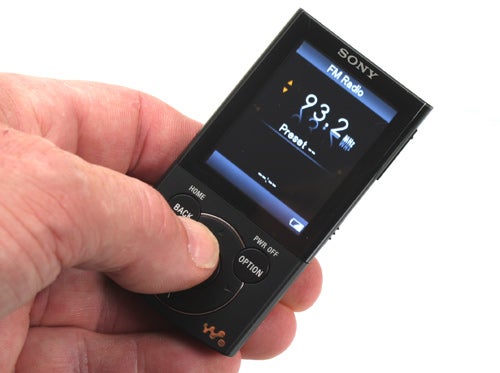 The E443 might not have a video camera – and will be considered all the better for it in my estimation – but it does have an FM tuner. I’m as unconvinced as to its necessity here as ever, but at least it has feature parity with the nano, with live pausing and recording both supported.


More useful, to my mind, is voice recording. The E443’s microphone is placed rather awkwardly, such as it ends up pointing into your palm with the player held ‘normally’ so if you forget to point it at what or who you want to record you’ll end up with muffled audio. Otherwise the quality is as good as can be expected – sufficient for taking revision notes or recording a private meeting, but not a concert.

As ever the biggest benefit Sony’s Walkman offers over the equivalent iPod is what should be a major consideration in a media player, its sound quality. It’s a traditional Walkman strength and the E443 is testament to that, sounding far and away better than the current generation iPod nano, or touch for that matter. Even the YP-Q2, which sounds very good, can’t compete.


Whether listening to MP3, AAC, WMA or linear PCM files you’ll notice the E443 gives a warmer, fuller and generally just better sound than its near rivals. That said, I don’t have a current iRiver model, which anecdotally could still best this Sony, but I’ll warrant the difference would be small. Battery life is excellent, too. Sony claims 30 hours of music playback, but I’m sure I’ve surpassed that over the last few days.

The best thing about the great audio reproduction provided by the E443 is that it makes an investment in a decent set of earphones all the more worthwhile. Listen to a pair of Ultimate Ears 700s with an iPod touch and you might be forgiven for thinking Paramore’s Brick by Boring Brick lacks presence low down, but from the E443 there’s bass a-plenty, without it becoming overpowering.


You don’t have to be borrowing a teenage girl’s music to see the benefits, either. Something more grown up like Wagner’s Ride of the Valkaries or Beethoven’s Symphony no. 9 are an eminently listenable experience on the E443 to the extent that I’m not really looking forward to reverting to my iPhone for day-to-day music playback duties. 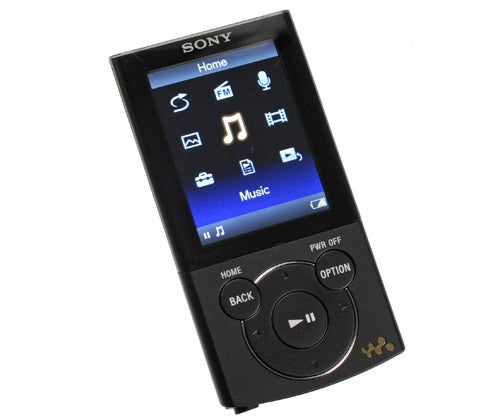 The E443’s stellar performance makes it all the more galling that there’s no support for any compressed lossless audio formats. Even the iPod nano will play back Apple Lossless audio, although I defy anyone to notice with its decidedly mediocre DAC. Sure, you could rip your music as WAV files, but carting around uncompressed audio rather negates one of the benefits of digital music. I’m pretty sure that while Clear Stereo purports to reduce leakage between left and right audio channels, it doesn’t actually have a noticeable effect and the only other audio enhancements available are a bunch of pre-set and two editable equalizers, which hardly count – producers put a lot of effort into making sure an album sounds ‘right’ and I doubt you’ll do a better job.


In case you hadn’t noticed, my criticisms of Sony’s NWZ-E443 are basically just nit picking because the fact of the matter is that it’s a cracking good small media player. It might not have the out and out aesthetic appeal of an iPod and it may lack the snazziness of the YP-Q2’s touch-sensitive controls, but if all you want is a focussed music player that sounds good, nay great, then the E443 (or one of its higher capacity siblings) should be your first port of call.