It’s not too expensive, the controls are pretty intuitive and the sound quality is as good as you can expect from an MP3 player in this class. You really don’t need to know much more about the Sony NWZ-B152 to tell that it’s a compelling alternative to the 4th Gen Apple iPod shuffle for those in the market for a music-playing gym companion.


Of course there’s more to the story than just those basics, and Sony doesn’t have an entirely cut and dry victory on its hands. At £28 the NWZ-B152’s 2GB of capacity is about £8 less than an equivalent iPod shuffle, but the Walkman is a larger device, making it slightly less portable. A decent part of that bulk comprises the USB port, which is hidden under a cap that’s almost begging to go missing.

The build quality of the NWZ-B152 isn’t outstanding, with the plastic casing feeling, well, plasticy and the Forward/Back control proving a little wobbly. There’s enough metal that is doesn’t feel horrendously budget, but it’s definitely a step down from the more rigid construction of Apple’s players.


On the plus side, that USB connector allows you plug directly into a computer to transfer music rather than fumble around for the appropriate cable or dock. In doing so, you can immediately drag music onto it giving it a notable advantage over rival players that require software to manage their libraries. That said, we think that most iPod shuffle buyers will have a larger iPod as well, so they’ll probably not care as much about their gym-bound player needing also needing to use iTunes. Not that we wouldn’t opt for drag-and-drop transfers every time given the choice. 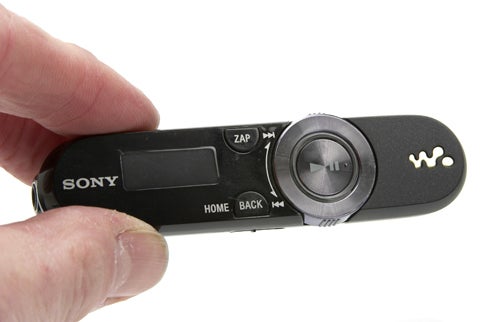 One particularly notable feature of the NWZ-B152 is the player’s ability to pull 90 minutes of power from just three minutes of charging. If you’re the type not to notice you’ve forgotten to charge your player until you come to use it, this will prove a very useful ability. On a full charge the NWZ-B152 claims 18 hours of playback while an iPod shuffle is good for just 15 hours. However, in our use we found ourselves wanting the change the music on the device – 2GB is good for less than 500 tracks – before we needed to recharge it; naturally jacking in to update the songlist charges the battery so the it never ran down fully in everyday use.

The screen on the Sony Walkman NWZ-B152 is large enough to fit just three lines of text on at a time, but does definitely make navigation simple. With only 2GB of space available, you’ll probably end up picking and choosing choice tracks and shuffling through the whole lot, but if you do want to play just one artist or album it’s nice to have an easy way to find those options. On the downside we found that the use of Back to go down and Forward to go up the menu structure slightly counter-intuitive.

More helpful is the option to turn off the flashing LED that sits under the play/pause button. We’re sure this probably looks neat enough in a shop, but in our use it never proved anything but an annoying distraction. Similarly, the built-in bass boost and equalizer functions are ostensibly useless, capable only of distorting your music, rather than enhancing it.


The NWZ-B152 has an interesting function dubbed “Zappin” by Sony. A press of the button and the player starts playing previews of tracks it thinks you might like to listen to, with a tap of a button starting the full track paying. It sounds a little gimmicky, but actually works quite well in those situations when you can’t decide exactly what you want to listen to.


Although absolute audio quality is less of a concern on a device this, mostly used for the gym and other active pursuits drawing attention away from high fidelity pursuits, this Walkman does sound pretty good, by tiny portable standards. 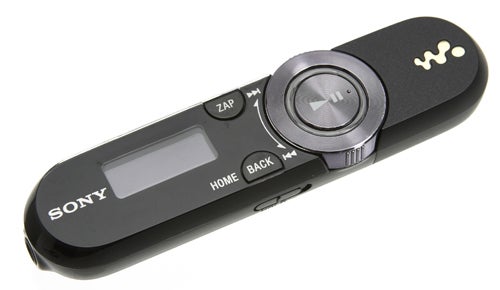 As mentioned, the Bass Boost turns the low end into a boomy mess, but with that disabled it proves punchy without being overwhelming. The mid-range is similarly well-balanced, but the high-end is definitely a weak point. So while drums have a good kick to them and guitars are given a meaty energy, cymbals, strings and more delicate woodwind instruments can lack presence. But we’re not convinced that anyone would notice that when using the NWZ-B152 while on a running machine.

The Sony Walkman NWZ-B152 isn’t exactly disappointing, but it’s not going to blow your mind either. It offers above average sound quality, a reasonably intuitive user interface and has the advantage of drag-and-drop transfer over its in-built USB port. The build-quality isn’t amazing but it’s good enough, and it’s priced to tempt users more budget conscious than style conscious.