While we certainly noticed Sony’s W9 series of TVs during our recent visit to the CES in Las Vegas, we were so entranced by the brand’s 4K X9000 and 4k OLED TVs that we didn’t have the time to give the W9s the attention they deserved.

Happily, we’ve swiftly been able to put this oversight right courtesy of a UK launch event this week at Sony’s UK HQ in Weybridge, during which we were able to get up close and personal with the 55in W9 model, set to hit the UK around April.

Brave new look
The W9s look radically different to last year’s range-topping 853 series. And the change is for the best, as the W9s sport a much trimmer frame far more in keeping with current fashion. Even better, Sony has injected some swagger into proceedings by adding an angled ‘quartz edge’ highlight into the upper edge that catches the light very cutely. 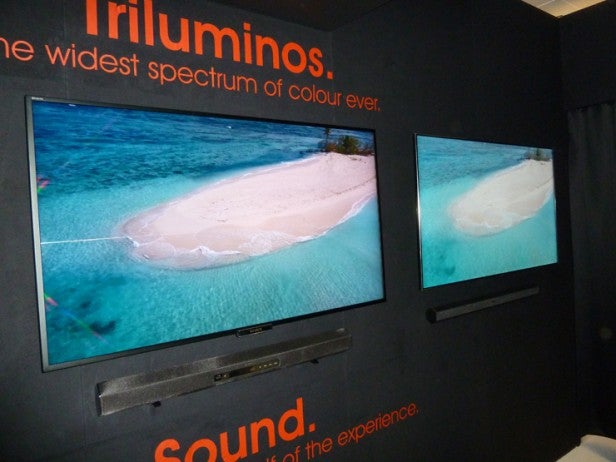 Also distinctive is a silver box at the centre of the bottom edge which Sony dubs the TV’s Intelligent Core. This emits different coloured lights so you can tell at a glance what source you’re watching.

Five key improvements
Feature-wise, no less than five key elements caught our eye. First, demos of the TV being used in conjunction with tablets and smartphones suggest Sony has made great strides in terms of networking its TVs with other kit. Particularly impressive was a demo showing the TV playing – remarkably cleanly – a film streaming wirelessly off a smartphone.

Local dimming
Third on our highlight list, the W9 delivers the latest iteration of Sony’s local dimming edge LED system. The 2012 version used by the 853 series was ground-breakingly good, so if the W9 version does even better, we’ll be ecstatic.

The two most exciting new tricks of the W9, though, are its combination of Triluminos and X-Reality Pro. The former of these applies colour filters directly to the LEDs to combat the usual edge LED lighting tendency to exaggerate blue. As for X-Reality Pro, this is the latest, improved version of the processing engine that also played a key role in the 853’s award-winning success. 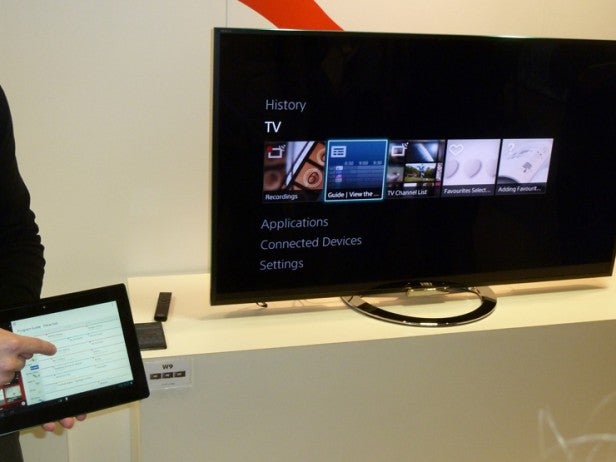 During our time in front of the 55in W9, we saw it running against both an 853 model and a range-topping model from a rival brand, with footage ranging from bright, detail-rich still photographs to various specially shot videos designed to deliver intense colour saturations – especially reds and blues – and high detail levels. And with every last bit of demo footage, the W9 suggested it’s going to be one heck of a telly.

Colour talent
The most palpable hit comes with its colours. The subtlety and range was in a different league to even that of the 8 series, allowing the tiniest of colour variations to be immaculately delineated – with scarcely a trace of the detail-crushing ‘blooming’ commonly witnessed with LCD TVs.

So during shots of stuff like bunches of strawberries and a collection of red umbrellas with slightly different tones, the W9 reproduced a much wider colour palette than the other two screens, delineating vastly more of the images’ subtle colour shifts.

Amazing detail
Thanks to the latest X-Reality Pro engine, meanwhile, the W9 also delivered pictures that looked much sharper and more detailed than those of either of the two TVs it was running against. Rain drops on the umbrellas were much more defined, as was the texture of the sand on footage of a ‘desert island’. The perfect blue sea around this island looked much richer and more satisfying than on either of the other two screens too.

The extra colour definition and sharpness combined to create a greater sense of depth with the W9 too, even though we only saw 2D footage during our hands-on.

It’s important to stress as well that the W9 comfortably held its own in terms of brightness and vibrancy against the screen from the rival brand (which is known for its aggressive picture approach) without sacrificing the detail and colour accuracy that looks set to be its hallmark.

Mystery lines
We did initially spot some blurring and trailing over the waves during the island footage. But thankfully this was fixed by turning off the set’s numerous noise reduction systems. The only other concern was the appearance in the picture of some fine horizontal line structure. This was similar in appearance to the filter you can see on passive 3D TVs if you get up close – yet the W9 uses active 3D tech.

Fortunately this line structure vanishes once you got more than four or five feet from the screen, and so shouldn’t affect viewing in a typical viewing environment. It’s still a bit strange, though – especially as no such line structure was visible on the 853 model.

Let’s not get hung up on this, though. For the simple fact is that on the evidence we’ve seen, the W9’s pictures look set to blow those of even the mighty 853 series out of the water. Which means pretty much by default that it has the potential to be the finest edge LED TV ever. Hurry up, April.