While there’s no knocking the VPL-VZ1000ES’s ambitions and spirit of innovation, its performance is a little hit and miss.

Looking at the hits first, Sony has done a remarkable job of managing to avoid the focus, geometry and light uniformity issues so often associated with ultra-short-throw projectors.

Each edge of the picture looks perfectly straight, with no bowing; there are neither any noticeable ‘hot spots’ of extra brightness nor dull spots of reduced brightness; and the image remarkably retains its 4K clarity right into its most extreme corners. 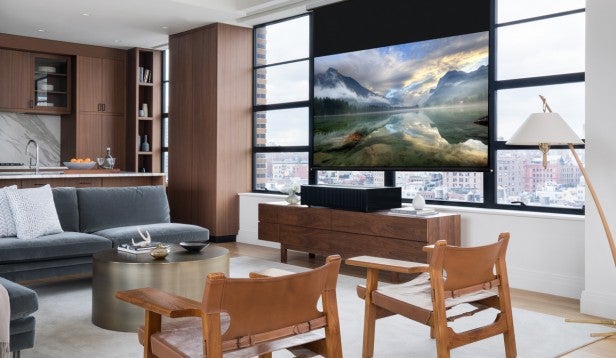 I’d really feared that the demands of the short-throw optical system would reduce the impact of the projector’s native 4K resolution versus Sony’s more straightforward 4K projectors, but this isn’t the case. Detail levels with native 4K sources look incredible. There’s no sense of visible pixel structure in the image at all. Diagonal and curved edges appear free of jaggedness.

Best of all, thanks to Sony’s Triluminos system, there’s no hint of blocking or striping in any area of colour, meaning there’s enough tonal subtlety to match the colour precision to the 4K pixel count.

Not that the VPL-VZ1000ES excels with only native 4K content. It’s also excellent at upscaling native HD sources to its 4K resolution, adding detail and pixel density without exaggerating noise.

The gorgeous clarity of the VPL-VZ1000ES’s 4K images benefits, too, from some typically outstanding Sony motion processing. Sony’s MotionFlow system can be used on its relatively low power settings to deliver images largely devoid of judder or blur ,without causing significant unwanted side effects. Although, even if you opt not to use MotionFlow, movement and camera pans still generally look natural and cinematic.

Colour is another area of strength. As noted a moment ago, the projector is capable of rendering even the finest of tonal shifts and blends. But just as importantly for its ambient light and HDR ambitions, it can reach saturations and tonal extremes with HDR content that leave SDR pictures looking pallid by comparison – and which go far beyond the colour range of the vast majority of rival HDR-ready projectors.

Add this vibrant colour response to an above-average light output and you get bright HDR scenes – such as the climactic American Football game towards the end of Billy Lynn’s Long Halftime Walk – that look nothing sort of majestic. Dripping in next-generation detail, brightness and colour intensity.

Similarly, the famously intense, bright exteriors of Pan on 4K Blu-ray look fantastic – especially since the VPL-VZ1000ES doesn’t ‘clip’ – lose subtle toning and detailing – much at all in areas of peak brightness.

While bright HDR scenes look spectacular, though, the projector starts to struggle with dark scenes, and those that contain a mix of dark and light.

This is firstly because isn’t a particularly great black level performer. A grey pall hangs over dark parts of the picture that no amount of tinkering with the projector’s settings can remove. Especially if you want pictures to retain their HDR-friendly brightness and colour intensity.

The other issue is that for all its laser lighting and 2500 nits of claimed brightness, the VPL-VZ1000ES still isn’t quite bright enough to retain light detail in relatively dark HDR picture areas. Low-lit objects start to lose light and colour detail where they appear against brighter background content – a ‘silhouetting’ issue common with HDR displays that struggle to deliver as much brightness as HDR ideally needs.

I’d also say that the projector has only just enough brightness to take on ambient light and thus become the genuine ‘TV replacement’ lifestyle option it’s so keen to be. Yes, pictures are watchable in ‘cloudy day’ conditions, but I wouldn’t go so far as to say they’re really enjoyable to watch unless light levels are really quite subdued.

And you’re definitely going to need a specialist light-absorbing screen if you want the VPL-VZ1000ES’s pictures to remain engaging in any sort of direct sunlight. 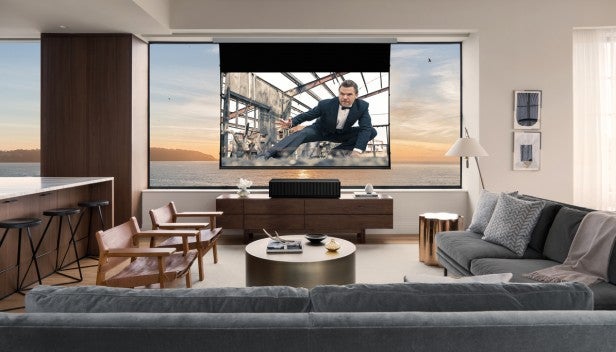 If the VPL-VZ1000ES’s key combination of a remarkable lifestyle design and native 4K, laser-driven pictures ticks your boxes, then the it’s uniquely qualified to give you what you need. Provided you have a spare £17,500.

Unless you really can’t manage without its unique lifestyle features, though, you might want to think about the Sony VPL-VW550ES 4K projector instead. Despite the VPL-VZ1000ES boasting superior colours, I actually prefer the VPL-VW550ES’s all-round picture performance. And it costs a ‘mere’ £9,900 to boot.

While the VPL-VZ1000ES is unique enough and good enough overall to appeal to the rather niche market it’s designed for, it isn’t quite brilliant enough to become the game-changing ‘crossover’ hit I’d hoped it might be.