The final product once it hit our test rooms, though, was too prone to crosstalk ghosting noise when watching 3D to really impress – especially given the VW90ES’s £5000 price. Sony appears to have been stung into action by the reaction to the VW90ES’s criticism, though, and assures us that it’s addressed the crosstalk problems when putting together the VPL-VW95ES we’re looking at today. So let’s see if Sony’s claim stands up to some in-depth scrutiny.

As with its predecessor, the VW95ES is an attractive bit of kit – especially if you like your AV gear to be big and serious-looking. Its elliptical (if viewed from the front) shape is unusual but attractive, especially as the centrally mounted lens gives it a pleasing sense of symmetry, and its high-gloss dark finish appears suitably opulent given the VW95ES’s fairly considerable £5000 price point. 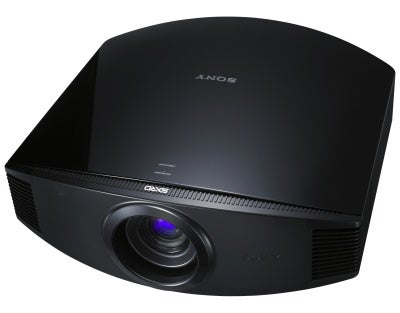 Its size, meanwhile, raises hopes of a heavy-duty internal ‘exhaust’ design that might help it deliver bright pictures without drowning out your audio with too much cooling fan noise. Indeed, Sony quotes a running noise of just 20dB – the lowest such figure we’ve seen attached to a 3D projector.

Connections are tucked under a ledge down the projector’s left side. This could complicate the projector’s installation for some people, but certainly not insurmountably. Among the jacks provided are two v1.4 HDMIs, a D-Sub PC port, a 12V trigger output, an RS-232 port for integration into a wider home control system, a hard IR input, and a LAN port. This latter port does not mean that the VW95ES is the first projector to support ‘Smart TV’ functionality, though. Rather it’s there as a means to attach an optional external 3D transmitter should the one built into the projector’s body not work properly within your particular room set up.

The thing that most stands out from the VW95ES’s spec list is its inclusion of the Dynamic Lamp Control system that made such a positive difference to the 3D performance of the entry-level Sony HW30 projector. What this does is adjust the projector’s light output depending on the condition of the active shutter glasses. If their shutter is closed, then the lamp power is reduced. If it’s open, then the lamp output is boosted. This should enable the VW95ES to deliver much brighter 3D images than its predecessor without ramping up the unit’s overall power consumption. 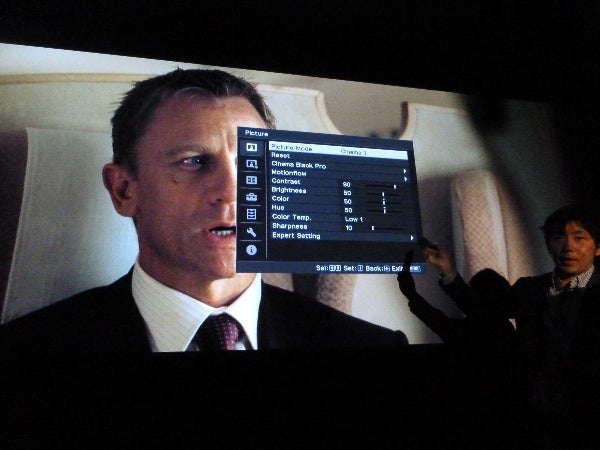 Crosstalk, meanwhile, should benefit from the VW95ES’s 240Hz panel driving system. It’s also worth noting that you can adjust the shuttering speed of the glasses, allowing you to potentially reduce crosstalk at the expense of a little brightness or vice versa. The glasses now used with the VW95ES (two of which are provided with the projector) are apparently nearly 25% brighter than those shipped with Sony’s previous-gen 3D projectors.

Other key VW95ES specs find it boasting an enormously respectable contrast ratio of 150,000:1, as well as a potentially less inspiring 1000 Lumens of brightness. We’ll have to see if this light output proves sufficient to give 3D images plenty of punch once you’ve got 3D goggles (with their darkening effect) perched on your face.


Setting the VW95ES up reveals it to be an impressively flexible beast. It boasts a good x1.6 level of optical zoom and a useful degree of vertical and horizontal optical image shifting. Both these features – along with the projector’s focus – are motorised and adjusted with impressive accuracy and stability via the remote control.

Sony has also introduced a ‘picture position memory’ feature to this projector, via which you can store five different zoom, focus and shift settings for viewing different aspect ratios. This system works well after the initial effort required to set it up, and is a heck of a lot cheaper and more convenient for people who own 2.37:1 cinemascope screens than buying an external anamorphic lens adaptor.

Next, there’s a very impressive amount of flexibility within the VW95ES’s menus for calibrating the picture to look exactly how you want it to. Sony’s Real Colour Processing system provides pretty much all the colour options you need (albeit via a rather strange menu system that’s not as intuitive as we’d like it to be).

There’s also plenty of gamma correction (with 11 presets on offer, as well as a manual black/white level adjustment) which proves unusually good, for instance, at letting you boost the image’s brightness without severely impacting its black level response. The VW95ES also sensibly provides separate picture adjustments for 2D
and 3D playback, in recognition of the very different image qualities
each dimension requires.

As with all of Sony’s relatively high-end projectors, the VW95ES carries a variety of frame-interpolating motion compensation settings, including an interesting Film Projection mode (not found on the HW30) which inserts a black frame into the image to deliver a picture that ‘feels’ more like something you’d see with a traditional celluloid projector. As ever we’re bound to say that the VW95ES’s motion processing won’t suit everyone thanks to the way it tends to make films look more like TV shows. But at least it can be said that Sony’s processing systems are good in the sense that they do what they do without generating many unwanted side effects.

Although the VW95ES’s 3D performance is notionally its most interesting element, we’re actually going to start our tests with its 2D performance. Partly to make sure you keep reading to the end (!), but mostly because it’s actually the VW95ES’s 2D performance that has got us most excited. Basically, the VW95ES’s 2D pictures are easily the best we’ve seen to date from an SXRD projector. Furthermore, they’re also suddenly up there with the sort of pictorial magnificence consistently offered by arch rival JVC.

The main reason for this is the leap forward the VW95ES delivers with its black level response. Dark scenes look quite gorgeously natural and refined thanks to the richness and depth of the projector’s black colour reproduction. Making this all the more remarkable is the fact that dark scenes are also stuffed with subtle shadow details and tonal variations, ensuring that they look every bit as rich and dynamic as bright scenes.

This is a truly exceptional achievement for a projector technology that’s traditionally had to rely on quite aggressive dynamic contrast systems to achieve deep blacks, with all the instability and ‘crushed’ shadow detail that tends to produce.

With the VW95ES’s ‘native’ black level performance so impressive, it’s also able to produce a more dynamic colour palette and contrast range than any SXRD projector before it, making images look far punchier and brighter than the 1000 Lumens quoted brightness figure would suggest.

Colours are, furthermore, the best we’ve seen from an SXRD projector, being able to deliver near pin-point accuracy if that’s how you roll, but also having infinite flexibility for making them look exactly how you want them to if, say, your tastes lean towards richer tones.

Then there’s the VW95ES’s sharpness with HD material. The only word we can think of to describe this is ‘blistering’, so exceptional is the projector at revealing every tiny detail in pristine HD sources. What’s more, this detail is produced without any noise and without making you feel aware of the pixel structure of the SXRD chipset. In this respect the VW95ES produces the sort of ‘polished’, smooth yet still ultra-detailed finish you’d normally expect to find with a very high-quality (and more expensive) DLP projector.

To be honest, it’s really hard to find any significant fault with the VW95ES’s 2D performance, but the same can’t quite be said of its 3D performance. For while the VW95ES is miles better with 3D than the VW90, it’s undeniable that there is still a little crosstalk around.

Thankfully this is by no means present in pretty much every 3D frame as it was with the VW90. But it’s still quite apparent around some bright objects in the mid-to-far distance during quite deep 3D shots. This is especially true if you choose the option in the projector’s 3D menus for running the 3D glasses on a high brightness setting.

However, if you head the other way and reduce the glasses brightness to ‘-1’ (one step below the default setting), crosstalk thankfully diminishes massively. The only catch with doing this, of course, is that you lose quite a lot of brightness from the image when compared with the actually impressively light images using either of the VW95ES’s ‘1’ or ‘2’ 3D brightness settings. So long as you’re watching in a darkened room, though, for us the advantages of the -1 glasses setting outweigh its negatives. 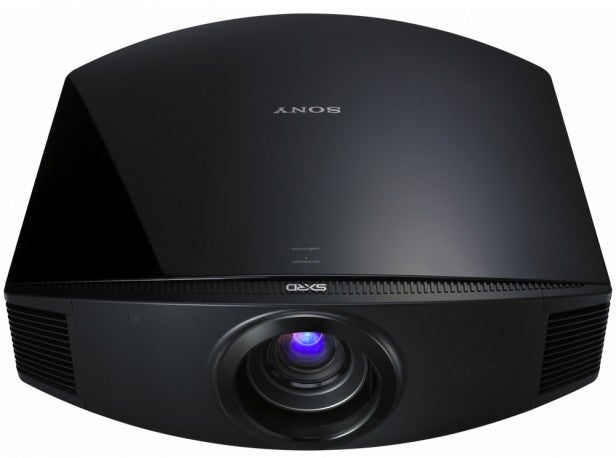 In other ways the VW95ES’s 3D images are very good indeed. They enjoy an excellent sense of depth thanks both to the big reduction in crosstalk from the VW90, and the way the projector still manages to produce good black levels and shadow detail despite the dimming effect of the glasses.

Colours look warm, rich and reasonably accurate even using the ‘-1’ glasses setting, and motion is very easy on the eye irrespective of whether it’s passing across the image or from front to back. We personally preferred to use the Motion Enhancer system on Low during 3D viewing, but even if you’d rather turn it off, motion still looks good.

In most ways, Sony’s latest 3D glasses are an improvement over previous versions too. Their best quality is the way they provide a really pronounced ‘cover’ over the top of the lenses to stop light coming down from above to get between the lenses and your eyes. This makes the glasses a bit chunkier than is fashionable, but we’d take image quality over fashion any day. The glasses also fill your field of vision nicely, and they’re rechargeable. This leaves as their only fault the appearance of a few internal reflections around the outer edges of each lens.

The last thing to report about the VW95ES is, fittingly, another bit of good news: namely that it does not mar its superb performance with unpleasant fan noise. In fact, as hoped earlier, it’s remarkably quiet for a 3D projector.

The VW95ES is a huge leap forward over the disappointing VW90, to the point where its 2D performance is so stunning that it does enough in itself to justify the hefty £5,000 price tag. Crucially, though, the VW95ES is also a very enjoyable and accomplished 3D performer – even if Sony still has a little way to go before it fully silences its crosstalk critics.