Even the most ardent of 4K detractors – for there are plenty around, no matter how inexplicable this might seem to us – would agree that applying native 4K resolution to images of the sort of size you get with a projector can boost picture quality. It’s just common sense, really; after all, the more pixels you’ve got to play with, the less likely it is you’ll be able to see the physical structure of the imaging chips in the picture on your screen.

Removing all trace of the technology behind the image obviously makes that image look more natural and involving. But that’s just the start of the 4K benefits the VW500ES delivers with our gradually growing stock of native 4K demo material.

Also mesmerising is the sense of depth visible with large-scale shots like vistas across cities or mountain ranges. Even in the relatively small world of TVs it’s easy to appreciate the way 4K permits the image to resolve more detail and thus depth in the far distance of shots, so you can imagine how impactful this benefit becomes when writ large on a huge projection screen.

Contributing further to the enhanced sense of depth and scale the Sony VW500ES delivers versus HD projectors is the pretty much immaculate nature of its colour handling. Colour blends look flawless thanks to the way the density of the pixels enables subtly shifted colour tones to appear in closer proximity to each other. And since colour blends and shadow tones play an important part in creating a sense of depth in objects, having them rendered so perfectly inevitably produces a more refined sense of solidity and space in the 4K image.

Then, of course, there’s 4K’s bounteous detailing. This is at its most obvious with stuff like leafy trees and grass football pitches, but in reality it permeates every corner of every frame of a native 4K source, delivering a visual impression that’s far closer to the way your eye perceives the real world than anything any normal HD projector can muster.

It’s great to see, too, that the VW500ES’s fast-reacting SXRD chipsets deliver on their promise of keeping motion blur to an absolute minimum even without using any of Sony’s motion processing tools. In fact, as noted in the set up section, we didn’t really feel that any of the provided motion processing modes – even the promising-sounding Combination one – contributed anything especially useful to image quality.

It feels like we’ve been a bit forensic about the impact of native 4K content on the VW500ES so far. So let’s sum it up by saying that it’s just stunning, and makes going back to a normal HD environment feel quite painful.

However much we might wish the AV world was already fully 4K, though, the reality is that normal consumers will be able to lay their hands on pretty much no native 4K content right now. This will likely start to change in 2014, but for now if you buy a VW500ES you’ll mostly be dependent on watching HD sources upscaled to 4K by the projector’s Reality Creation circuitry.

Just as well, then, that this system is excellent. Obviously when you’re watching upscaled pictures on screens as large as 200-inch there’s zero hiding place for any problems an upscaling engine might have. So the way the VW500ES manages to add detail, sharpness, texture and pixel density to HD sources without succumbing to source noise is remarkable – especially when you consider that the 4K world and 4K processing are in their infancy.

It’s excellent to find, too, that Sony has provided useful tools for adjusting the strength and focus of the Reality Creation upscaling. For us the best results were obtained by slightly toning down Reality Creation’s sharpness element from its default levels, though this procedure seemed slightly less essential than it was with the VW1000ES and the Sony 84X9005A 4K TV. 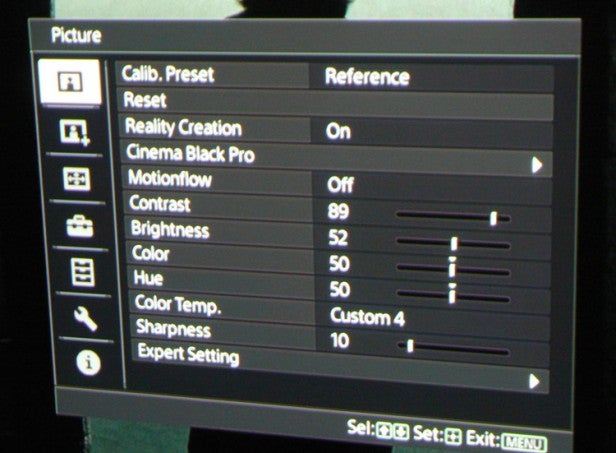 It must be stressed here that upscaled images on the VW500ES are no replacement for the jaw-dropping majesty of true 4K sources. But crucially the VW500E doesn’t leave HD sources looking worse than they would on a strong full HD projector, and at times – especially with relatively static, high quality footage – it makes them look markedly better.

Even standard definition sources look eminently watchable on the VW500ES. The best results are obtained with relatively high-quality standard def sources like good DVDs, but thanks to the huge library of different source types covered by Sony’s image processing engine even pretty low-rent Freeview broadcasts don’t look horrendous despite the enormous proportions the projector can deliver them at.

It does go without saying, though, that if you don’t do everything in your power to avoid feeding the VW500ES anything less than HD, you’re probably a little bit insane.

The only area where the VW500ES feels in any way less than spectacular in performance quality terms is black level response. Dark scenes show a little greyness in their make up that you don’t see with, say, JVC’s rival D-ILA projectors.

This is especially true if you don’t use the projector’s dynamic contrast system – yet if you DO use this, especially on its highest levels of aggressiveness, dark scenes can look unstable as the image’s underlying brightness levels are adjusted to suit the image content.

While the VW500ES’s black level situation does give JVC’s rival projectors a much-needed point of appeal, though, we should stress that the VW500ES is by no means bad in the contrast department. In fact, by the standards of the projection world at large it’s very good indeed – especially in the amount of  shadow detail it can deliver in dark areas.