Despite having to upscale 3D Blu-rays and Sky feeds to deliver a 4K active 3D experience, the VW500ES delivers an outstanding 3D performance.

Detail levels are extremely high, and the pixel density of the upscaled image helps the 3D environment look more real and solid. The projector also handles 3D motion quite well, without too much of the judder that’s often seen with 3D displays, and the impressive brightness levels the VW500ES can produce ensure that the picture still looks bright and colour-rich despite the inevitable dimming effect of the shuttering glasses.

The combination of a good contrast performance and strong shadow detail reproduction helps the VW500ES delineate a superior sense of 3D space too, and finally it’s a real relief to find Sony largely overcoming previous issues with crosstalk ghosting noise. This problem could have seriously detracted from the incredible sharpness of the 4K image, so it’s great to find that it now only appears occasionally over distant objects, where it seldom draws your eye.

While video games look awesome on the VW500ES, there is, alas, a catch. For our measurements recorded an input lag of nearly 100ms from the projector, which is high enough to compromise your gaming performance in reaction-based games like Call of Duty, Battlefied and Guitar Hero. Shame. 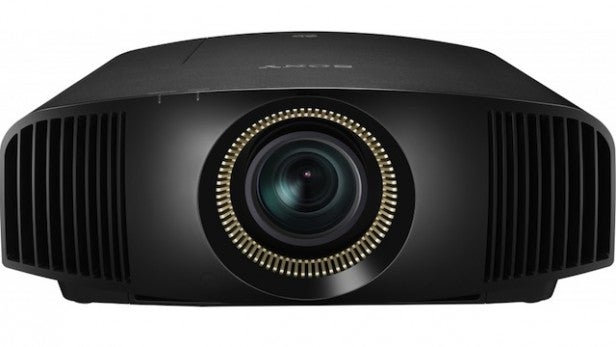 While the impact of the VW500ES’s native 4K resolution is stunning – especially with native 4K sources – we should say that ultra high-end HD projectors like the recently tested Sim2 Superlumis can produce incredibly cinematic images despite not having a 4K resolution, thanks to their stunning optics, super-high brightness levels, immaculate colour handling and three-chip DLP systems. However, the Superlumis costs £37,000! So really drawing any sort of comparisons between the Sony and the Sim2 really just underlines the Sony’s appeal!

In terms of projectors in the Sony’s price range, the only models around that warrant mentioning in the same breath are the upcoming JVC X700R and X900R projectors, selling for £7,300 and £10,300 respectively. These accept 4K signals and deliver 4K pixel density via JVC’s e-shift 4K system, which feeds 1080p images through two full HD image chips offset diagonally by half a pixel. However, these chips are still ultimately only HD in nature, so they don’t deliver a true, native 4K image.

From what we’ve seen of these imminent JVC models, though, they do deliver a superior black level response to that of the VW500ES, which will appeal to some serious home cinema fans. For many others, though, the future-proof nature of the VW500ES together with its genuinely spectacular picture quality will make it hard to resist.

If you’re serious about films and video quality, the Sony VW500ES is a genuinely significant moment in AV history. It makes truly cinema-sized 4K video playback for the home a tangible, (almost) affordable reality for the very first time — and incredibly doesn’t significantly compromise picture quality in the process.

Next, read our roundup of the best 4K TVs