The VPL-VW320ES is capable of displaying stunning images with the right sort of content. But it isn’t quite flexible enough to feel like the home-cinema dream machine I’d been hoping for.

Let’s get the bad news out of the way first. The projector has an average black-level response. No matter the settings chosen, dark scenes have a noticeable greyness that sometimes obscures subtle shadow details and reduces the picture’s sense of depth. 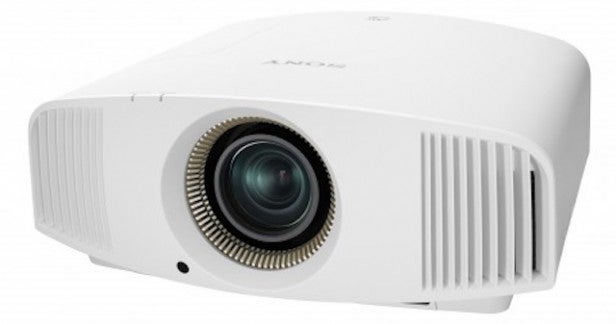 The VPL-VW320ES also doesn’t blow me away when it comes to HDR performance. Like the JVC DLA-X7000 I tested recently, HDR pictures in general appear less bright than standard dynamic range ones. This is presumably a result of the projector’s lack of native brightness, which means it has to lower its median brightness level with HDR to deliver the format’s expanded luminance range.

The VPL-VW320ES does manage to deliver expanded light peaks with HDR content, but the image’s overall sense of balance and light “toning” feels more comfortable when watching movies in their standard dynamic range form.

The HDR light range feels slightly forced and there are moments of silhouetting, where dark objects against bright HDR backdrops end up looking like empty shadows as the projector’s lack of native brightness prevents it from rendering all the image’s shadow detailing.

The colour palette adopted by the projector, which uses the default Colour Space 3 HDR profile, is rather flat, delivering only very slightly on the expanded colour gamuts associated with HDR sources. Here, again, I found that the colour performance achieved with SDR content is more comfortable and natural looking.

Switching the colour profile to the projector’s BT2020 option injects considerably more punch into HDR content’s colour playback, but it results in a palette that can feel a little overblown and unbalanced.

Playing HDR also means you’ll have to use the VPL-VW320ES’s lamp in its high setting, which reduces the lamp’s life and causes a marked increase in the amount of fan noise it produces.

To be fair, fan noise isn’t loud or disruptive enough to distract you often from what you’re watching – unless you’re sat right next to the projector – but it’s still something HDR users need to be aware of.

A recent firmware update also means the VPL-VW320ES does a flawless job of automatically recognising HDR content flags. It switched without fuss into its HDR mode as soon as I fed in HDR content from both my Samsung UBD-K8500 and Panasonic DMP-UB900 Ultra HD players.

Overall, though, there was no denying that I found myself preferring to watch Ultra HD Blu-rays on the VPL-VW320ES with the HDR turned off.

In SDR mode, the VPL-VW320ES offers up images that are far easier in which to become immersed. The light balance in the image feels less strained, the colour balance feels more consistently natural, and the picture looks brighter.

The clarity of 4K images is a huge highlight of the VPL-VW320ES. While the pseudo-4K e-shift technology JVC uses in its 2016 projectors is undoubtedly clever, the VPL-VW320ES’s native 4K images look comfortably sharper and cleaner, proving that there really is no replacement for the real 4K resolution deal.

It also handles motion very well. Without using any of the provided motion-processing options, pictures suffer minimal judder or blur. But the True Cinema setting for Sony’s MotionFlow system can increase the clarity even further, without resulting in many distracting digital side effects, or making the picture look excessively uncinematic.

Another string to the VPL-VW320ES’s bow is its upscaling of HD content. The Reality Creation processing does a superb job of adding detail and even extra colour-blend information to HDR source content, while simultaneously suppressing source noise.

There really is no hiding place for potential upscaling frailties such as softness, motion lag and dot crawl at the image sizes this projector can produce, yet I hardly ever felt distracted by such problems while watching hours of HD content. My only warning here would be not to feel tempted to set the sharpness component of Reality Creation too high.

The VPL-VW320ES runs very quietly with SDR content too, since this lets you set the lamp to its low mode. In fact, SDR pictures look their best with the lamp on “low”, since this reduces the impact of the low-contrast greyness mentioned earlier.

This greyness certainly doesn’t completely disappear by any means, though.