The VW300ES is potentially the most exciting 4K product yet. It’s a native 4K/UHD projector using Sony’s impressive SXRD technology that can be yours for the astonishingly reasonable sum of £5850. Which begs just one question, really: what’s the catch?

The VW300ES doesn’t show any outward signs of compromise. Its large, bulky, vaguely elliptical shape with its central lens and front-mounted cooling grilles make the VW300ES basically identical in appearance to its much more expensive VW500ES 4K sibling. 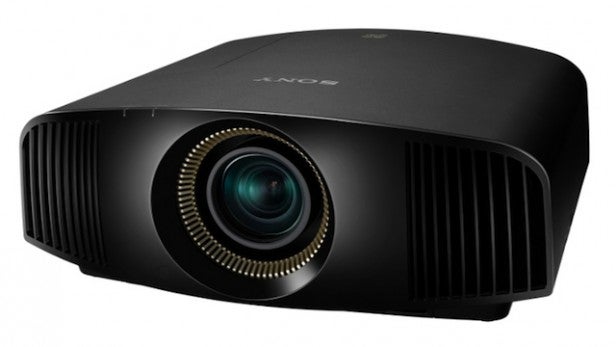 Connections are tucked down the projector’s left side (as you look at it), and comprise two HDMIs, an Ethernet port, a USB service port, a 9-pin RS-232 port for integrating into wider home entertainment control systems, an IR input, and two 12v trigger outputs. Please note, however, that you don’t get a typical three-line component video input on the VW300ES, or a D-Sub PC port.

Of course, essentially all of the 4K/UHD content that’s slowly creeping through is arriving in the 3840 x 2160 format, but don’t worry; the VW300ES doesn’t engage nasty scaling processing to remap such sources to its true 4K resolution. Rather it just doesn’t use the extreme edges of its chips – something you’ll notice if you use the provided built-in test patterns when setting the projector up.

The SXRD chips at the VW300ES’s heart are unusually well set up for 4K playback. They need hardly any gap between each pixel and respond fast enough – in theory, at least – to react to changing image content without causing 4K-damaging blur and resolution loss.

We’ve also noticed Sony’s SXRD chips coming on leaps and bounds in contrast terms over the past couple of years – but actually this is one area we do feel concerned about with the VW300ES, as it doesn’t employ a dynamic iris arrangement like the step-up VW500ES does. Underlining our concerns is the way Sony doesn’t give a claimed contrast ratio figure for the VW300ES, while it’s perfectly happy to go public with the 200,000:1 contrast figure claimed for the VW500ES.

It’s worth considering, though, that not having a dynamic iris could lead to a more stable-looking image and potentially less operating noise.

The lack of a dynamic iris and resulting drop in contrast isn’t the only difference between the VW300ES and its more expensive VW500ES sibling. Its maximum brightness is also 200 Lumens down on the 1700 Lumens delivered by the more expensive projector, and you don’t get the VW500ES’s auto-calibration feature.

One other key cutback on the VW300ES is lens memory, meaning that people with ‘cinemascope’-ratio (2.35/2.4:1) screens can’t establish different, easy-to-access sets of zoom and focus parameters for the many different aspect ratios the movie world uses.

Another slight limitation – although this is one the VW300ES actually shares with Sony’s other 4K projectors to date – is that despite carrying an HDMI 2.0 socket with HDCP 2.2 support, the VW300ES’s chroma subsampling support tops out at 4:2:0 rather than the full 4:4:4 system. To be fair, though, the VW300ES is far from alone in this regard, and it doesn’t mean that the VW300ES won’t necessarily be able to deliver natural and punchy colours. Especially as it still employs Sony’s Triluminos technology for delivering a wider colour gamut than typical projectors.

The VW300ES also joins the VW500ES in supporting 3D playback, and while no 3D glasses are included you don’t necessarily have to buy a pair of Sony’s TDG-BT500A models – Sony is part of the 3D glasses initiative, so you should be able to use other brands of active 3D glasses you may already own if they’re compatible with this initiative. We had no problem getting a pair of Samsung’s latest 3D TV glasses to work with the VW300ES. That said, we have heard reports that some glasses from brands (including Epson and Panasonic) that are part of the 3D glasses initiative actually don’t work. We’re trying to find out more about this from Sony, and will update this review if we hear anything.

The VW300ES even introduces a new feature not originally found on the VW500ES: a video game-friendly low latency mode designed to reduce the time it takes for the projector to produce its images. This is a potentially very welcome move given that input lag measured a little high on the VW500ES – and actually it’s a feature that can now be added to the VW500ES via a firmware update.

The VW300ES is fairly easy to set up on a basic level, for the simple reason that, as with Sony’s latest TVs, it features a well-thought-out and sensitively calibrated set of picture presets. Film 1 and Film 2 are especially useful for dark-room viewing, although it’s also good to see Sony being pragmatic enough to include a bright, more heavily saturated TV mode for viewing video content in relatively bright conditions. 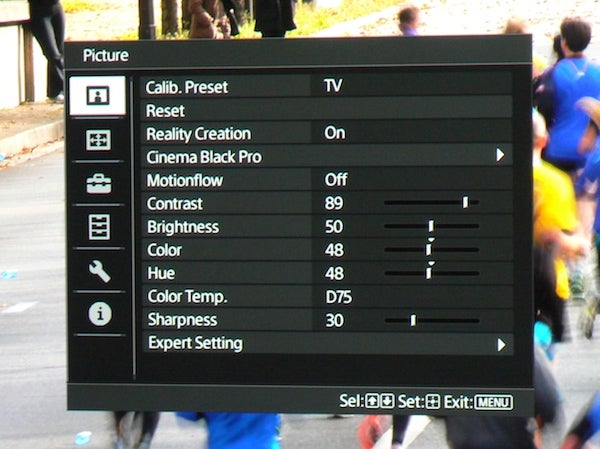 If you want to go beyond the presets into something more specifically optimised for your room conditions, though, then the VW300ES is reasonably well set up for that, too. It’s got 10 different gamma-correction settings, for instance, including the 1.8, 2.0, 2.1, 2.2, 2.4 and 2.6 values. It’s got four different colour temperature presets, multiple colour-space settings including BT.709, and multiple settings for Sony’s MotionFlow motion processing – which is definitely one of the more accomplished examples of this sometimes dark video art. There are also multiple ‘strength’ settings for a useful contrast-enhancer system, and you can switch the lamp between low and high brightness outputs.

When it comes to the rather more straightforward business of getting the image to the right size and right position for your screen, the VW300ES handily provides fully motorised lens controls for zoom, focus and vertical/horizontal optical shift. We did find it a little tricky to get the focus exactly right using the automated controls, but with a little toing and froing we got there in the end.