Just a couple of weeks ago I reviewed Apple’s iMac, the epitome of high design, one box computing. As I sat there looking taking in its sleek curves and glossy looks, I couldn’t help but wonder why you couldn’t get a PC that could equal its style. Ironic then that just a few days later, I found, waiting for me on a desk in our labs, the Sony VGC-LT1S, as if to say, “oh yeah Apple, check this out”. So can Sony style, match Apple attitude? 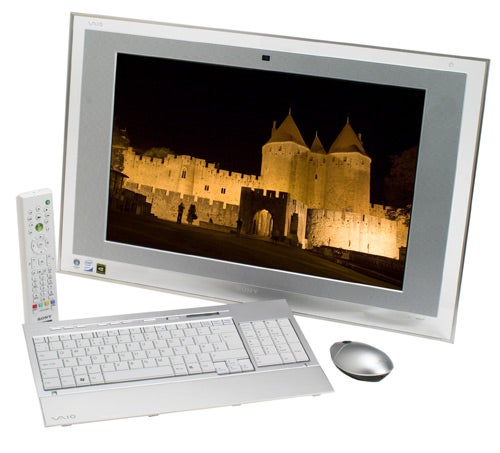 The Sony VGC-LT1S certainly makes an impression compared to your average PC. As with the iMac the PC is built into the back of the display and with a wireless and keyboard and mouse it makes for a very minimalist set up. However, the Sony looks quite different. While the back of the display is not as thin as Apple’s deliciously svelte new iMac, Sony has placed the whole thing in a transparent frame, with thin photo frame like edges, giving it a floating look, reminiscent of Sony’s Bravia TVs. This is quite fitting though as this machine is more than just a PC – it’s a fully fledged media centre courtesy of a dual hybrid TV tuners – which is great to see as it means you can watch one digital or analogue channel while recording another. Naturally, with Windows Vista Home Premium installed you get Windows Media Centre and a nice looking remote control is supplied, though for some reason it’s white rather than a system matching silver, which seems to be a bit of an oversight. 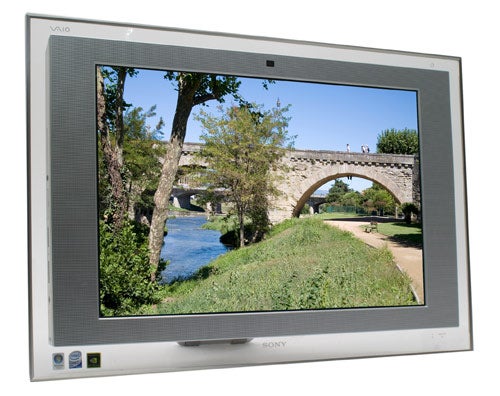 The display is 22in in diameter and has a 1,680 x 1,050 resolution and sports X-Black technology – a glossy coating that’s designed to enhance colours and contrast. The size is large enough to serve as a small TV for a study, office or kitchen, say, and of course is perfectly comfortable to work on as a regular PC. The display is Vesa compliant so can be wall mounted – you just need to remove the rear stand, though the mount has to be purchased separately, according to the US website – as of writing the LT series isn’t currently on the UK Sony site. The TV Tuner inputs and networking connections are side mounted so you could get to them even when it’s hung up on the wall. There are also some cable management hooks so you can keep the wiring neat and tidy. 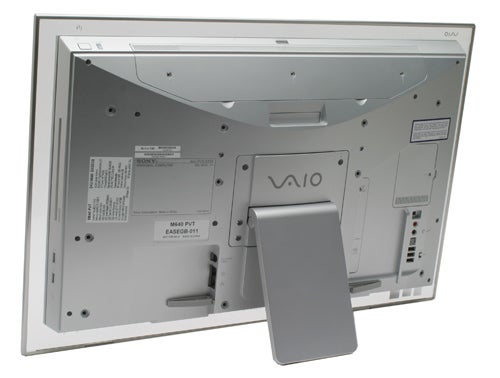 Like the iMac, at the top of the screen there’s a webcam, that Sony says has a 1.3-megapixel resolution and gives 30fps, but unfortunately, it didn’t work on our review sample, so I can’t comment on the quality. The bezel is a grille pattern that looks like one large speaker, which is reasonably smart, but what really makes it look good, is the fact that it’s offset by the transparent frame. The various logos, indicators and lights are actually encased in the frame, which is basically very cool. The yellow power light glows in the top right hand corner yet has no visible connectors sending it power – it’s the same with the disk activity lights and the illuminated Sony logo that sends out a pool of light downwards. A shame then that the whole thing is spoilt by the three stickers at the bottom left for Vista, Intel and nVidia. When Steve Jobs was asked at the new iMac launch why it didn’t put the Intel Inside stickers on its iMac he laughed and simply said, “we like our own stickers better”. Guess no one at Sony has the balls to say no to Intel et al. You can remove them but you’ll be left with unsightly glue remnants that will be a pain to remove.

The VGC-LT1S sports an Intel Core 2 Duo T7250. This is 2GHz with 2MB of Level 2 cache, so it’s not quite as good as the 2GHz Core 2 Duo with 4MB of L2 cache that’s fitted to the base iMac. There’s 2GB of RAM, which is really what you need for Vista. The base spec machine has a 250GB hard disk, and makes do with a dual-layer DVD Writer. However, the top spec LT1S we were sent sports a larger 320GB hard disk and a Blu-ray drive that also burns DVDs but doesn’t do the same for Blu-ray – it’s a player only. The Blu-ray drive is located on the right hand side and is slot loading, naturally. 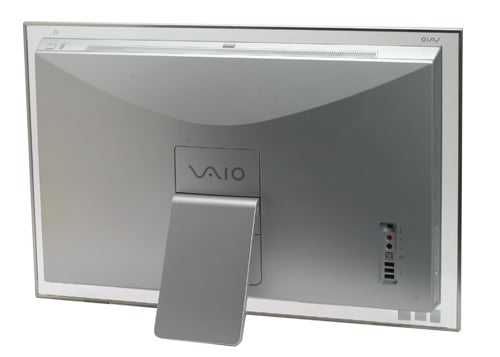 At first we had trouble actually getting our copy of Casino Royale to play, with the frustrating message – “display environment was not permitted to play restricted content” halting proceedings. After much fiddling it runs out that the nVidia 8400M GT graphics chip driver was set to clone mode, so that a second display would show the same thing, which HDCP certainly doesn’t like. However, setting it back to single display let us enjoy the delights of Eva Green and the Aston Martin DB-S, which both looked very fine on the X-Black display. Colours were perhaps a little over-saturated and skin tones not quite perfectly natural. The 1080p image was also being scaled down slightly, as there’s only 1050 lines on this screen, which lead to some jaggies appearing on curved edges. However, this is nit picking with what was an eminently watchable high definition picture. Freeview from the built in TV tuner naturally didn’t look quite as good, but HD channels on Freeview should be appearing in the next couple of years, so we can look forward. 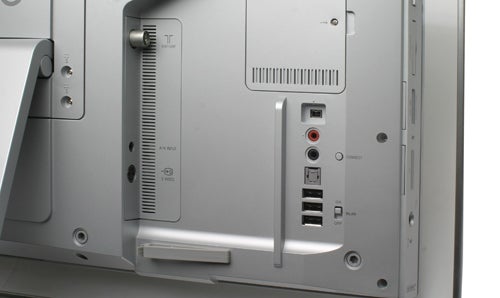 Beneath the slot loading Blu-ray drive, you’ll find two USB ports, while there’s a lot more going on the opposite side, with separate PC Card and Express card slots, and memory stick and SD card slots. Beneath this there’s a headphone socket and a small yellow light to show when the built-in Wireless is on, which offers both b, g, and n standards. Round the back is a switch for turning the wireless off, three more USB ports, a mini 4-pin FireWire port and stereo analogue line-out as well as a digital optical connector, so you should be able to hook up to external amps to get surround sound from DVDs and Blu-ray discs. However, without an HDMI output there’s no way you’ll be able to extract the new high resolution surround formats from the discs. That said, that’s not so much of an issue as it’s hardly likely to be a main display for a home cinema system. 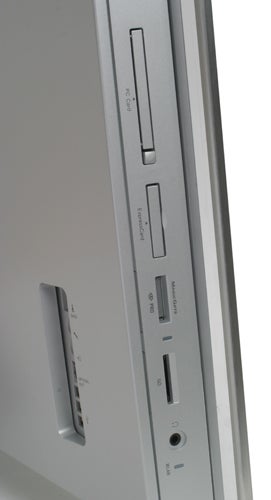 Powering on the system is done from the button on the top right. Next to this is a display off button so when you’ve finished watching TV you can leave it to do PC like things while the screen is off. With the display on you’ll meet the delights of Windows Vista Home Premium. We had trouble with our installation that we tracked to the preinstalled Norton 360 and it took a system restore to remove the issues and personally I’d recommend uninstalling Norton at the first opportunity. However, the other provided applications are up to Sony’s usual high standard with Adobe Photoshop Elements 5 and Premier Elements 3, and though both have just been superseded by the just released newer versions they’re still great to have essentially for free. There’s also lots of Google related software ready to go, such as the Google Gadgets, possibly a bit redundant on Vista, and Picasa 2. 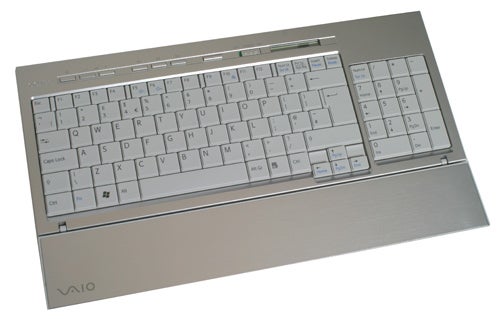 Accompanying the screen is a wireless keyboard and mouse. The keyboard has a full number pad, which I was pleased about, and there are mute, and volume controls along with three shortcut keys assigned to Media Centre, switching display modes between PC and video and an eject button for the Blu-ray player. Next to this is a system standby button. There’s also a power off button so you don’t waste the rather demanding four AA batteries it takes when the machine’s not being used. The keyboard has a stylish double hinged flap to cover it when it’s not in use, and it also acts as a very smart wrist rest. The layout of keys is good and they are full size, and it’s actually very nice indeed to type on. The mouse has a bulbous 50s Sci-Fi look to it, that I rather like, and though it’s a fairly conventional two button and scroll wheel mouse, it felt comfortable in the hand. If you like the idea of this machine as a regular home office machine, you’ll do fine with these two. 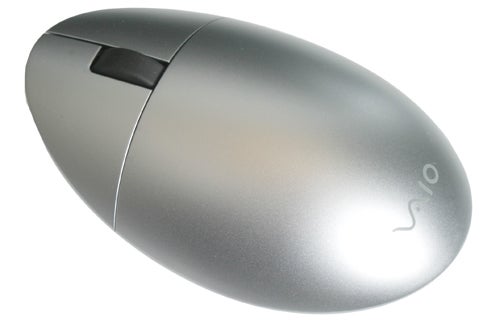 In fact the more I used the machine the more I was impressed. Its look and feel is typically PC, – angles, grilles and transparent plastic, compared to the iMac aluminium and glass, but it’s a great look – sleek and modern. I’d say overall the iMac still wins in the design stakes but if you mount the screen on the wall you’ll certainly be making an impressive style statement. 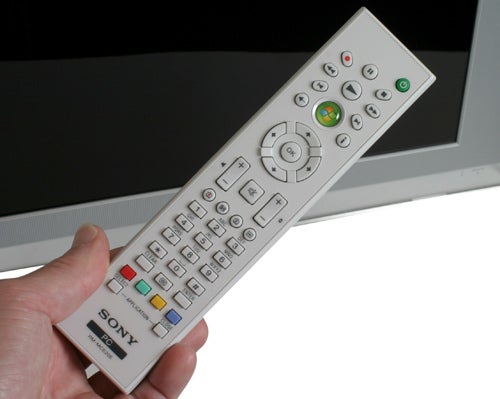 With the display on the desk it looks like a large photo frame and lacks height adjustment, and of course you’ll be fairly limited on games performance from the built-in 8400 M GT graphics but this system is about media centre style entertainment, media creation and office work. In fact it’s good for all the things the iMac does, just PC ‘stylee’. 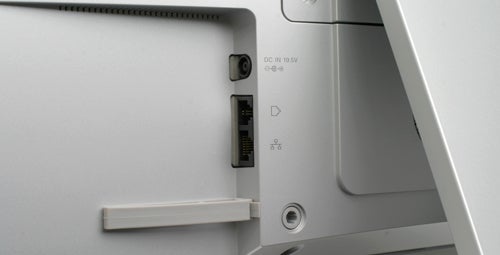 Value wise it’s a good £500 more than the base iMac but you get more – more RAM, though that’s a necessity for Vista, a larger display, dual digital TV tuners and a still very expensive Blu-ray drive – so it’s pricey but still well priced.


If you have been considering an iMac but like the thought of Blu-ray and TV Tuners, neither of which Apple’s machine currently offers, this could be enough to stop you from switching. Sure, Vista just isn’t as good as MacOS, even before Leopard launches but this machine is more about media than pure computing, and on that basis this machine makes a lot of sense.


In the end some minor issues means it’s just shy of full marks but I couldn’t help but be impressed with this stylish, powerful and well featured media centre.


Sony’s latest all-in-one is an undeniably stylish machine that’s powerful, and well featured, with highlights including a Blu-ray drive and dual hybrid tuners. It’s not hideously expensive for what you get either – there’s no denying that this is a first class machine. 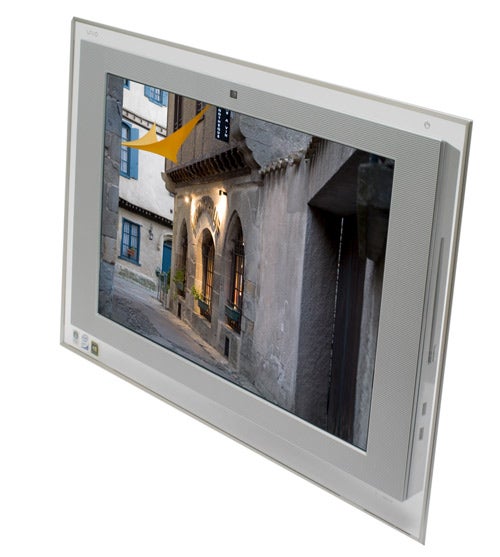