Back in October I reviewed the Sony VAIO VGN-TX1XP and was won over by its gorgeous design, light weight and truly exceptional battery life. Now I have the new VAIO VGN-TX2XP in front of me and it looks every bit as good as its predecessor, so much so that I wasn’t sure that Sony had sent me the right machine at first. Yes, the TX2XP looks pretty much identical to the TX1XP on the outside, but to be honest that’s no bad thing.


I’ve reviewed a great many notebooks over the years, but this TX chassis is one of the best I’ve ever used. Not only is the TX2XP incredibly light at only 1.25kg, it’s also tiny, measuring only 272.4 x 195.1 28.5mm (WxDxH). The lid is finished in a dark blue with a mirrored VAIO logo in the centre, but when you open it up the whole keyboard and wrist rest are matt silver. 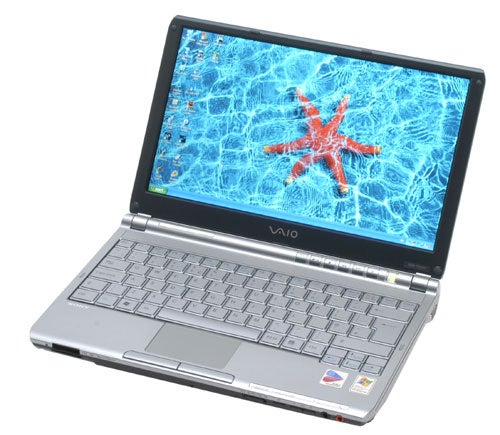 The 11.1in screen is the same as the TX1XP with a generous 1,366 x 768 resolution – this gives you a true 16:9 aspect ratio, making the TX2XP ideal for watching movies on the move. The TX1XP pioneered the use of LEDs as a backlight source for a notebook screen, but it wasn’t without issue – there was a significant amount of light bleed from the bottom of the screen – something that I mentioned to Sony at the time. Thankfully it would appear that Sony has worked hard to resolve this issue because there’s no hint of light bleed on the TX2XP.


The screen in the TX2XP benefits from Sony’s X-Black high contrast coating, which makes colours look incredibly vivid and bright. Yes, the screen is more reflective than a standard TFT, but that’s a small price to pay. The LED backlight will give you a wider colour gamut as well, but to be honest that’s not going to be a massive advantage on a screen this size. The big advantage that you do get with an LED backlight screen is significantly improved battery life and that has never been more true than with the TX2XP. 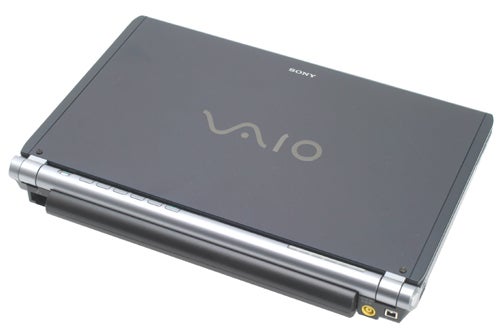 The keyboard may be too small for some, but I had no problem typing at full speed. Despite the keys being somewhat smaller than many other notebooks, Sony has still managed to over-size the Return, Backspace, Caps Lock, Tab and Shift keys. It’s also reassuring to see that the Spacebar is a decent size, and even the cursor keys are dropped down from the main keys.


Below the Spacebar is one of the best touchpads I’ve ever used – not only is it superbly responsive, but it also has a textured and tactile feel to it. The right side of the touchpad can be used for scrolling up and down through documents, but strangely the bottom edge can’t be used to scrolling left and right – that said, you won’t need to do much horizontal scrolling with a 1,366 x 768 resolution.

Above the keyboard you’ll find a set of multimedia controls for the AV mode. Pressing the AV mode button when the notebook is powered down will start the machine up in a Linux shell that allows you to playback CD and DVD discs, as well as show slideshows of images. The advantage of using AV mode is that it draws a lot less battery power than booting into Windows and given that the TX2XP managed a DVD playback time of five hours and 41 minutes under Windows, you’re probably looking at well over six hours using the AV mode. 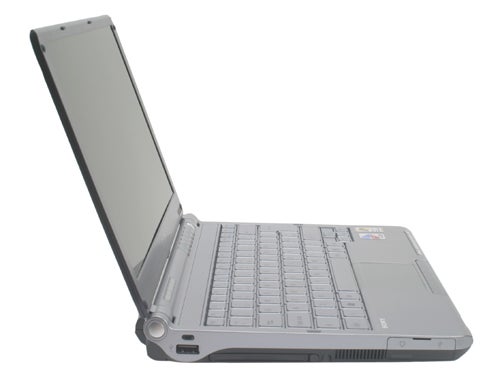 Despite the very slim and light construction of the TX2XP, there’s a decent amount of features crammed into the chassis. The right hand side is dominated by the integrated DVD writer, along with a D-SUB port. The front is pretty stuffed full – there are headphone and microphone jacks, volume controls, mute mutton, a hardware switch for the integrated wireless adapters and memory card slots for SD, MMC and MemoryStick formats.


On the left hand side there’s a plastic flap hiding an USB 2.0 port and a modem socket. There’s also a Type II PC Card slot and another USB 2.0 port. Most of the rear is taken up by the battery, but there’s still room for a four-pin FireWire port and an Ethernet port. You’ve also got integrated 802.11b/g WiFi and Bluetooth, so pretty much all the connections options are covered.


Inside the TX2XP you’ll find an Intel Pentium M Ultra Low Voltage CPU running at 1.2GHz, just like the TX1XP. The processor is supported by 1GB of system memory, just like the TX1XP. Storage has increased since the previous model – Sony has squeezed an 80GB drive in this time instead of the 60GB unit seen in the TX1XP. Graphics still come courtesy of the Intel integrated chipset, although this time it’s the 915GM which can grab up to 128MB of system memory. 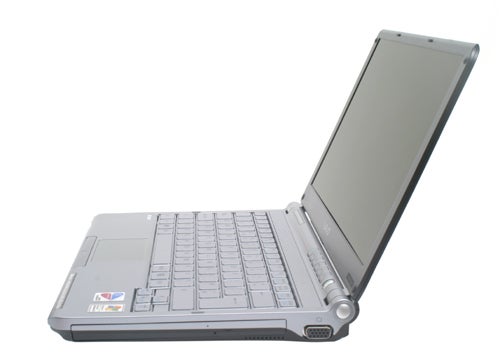 I have to say that I’m a little disappointed that the TX2XP isn’t sporting a Core Duo chip, but then I guess Sony didn’t want to adversely affect the battery life, which is surely this notebook’s best feature. Running Mobile Mark 2005, the TX2XP turned in a truly staggering battery life of seven hours 11 minutes – that’s pretty much the Holy Grail of notebook technology, a full day’s work on a single charge. I took the TX2XP with me to the Intel Developer Forum and while I was covering the event, I didn’t even bother to take the power brick with me – the battery life was so good that I was able to work for the entire day without ever having to search for a power socket!


However, long battery life can often come at the detriment of performance, and I definitely found the TX2XP to be a little sluggish when using internal power. By default the 1.2GHz ULV Pentium M processor will clock down by 50 per cent when on battery power – so your processor is only running at 598MHz. Now I know that I’m what you’d probably call a “power user” when it comes to notebooks, but having lots of applications open, and then trying to edit images using Photoshop left the TX2XP struggling at times. To be fair, I was editing eight megapixel images, which is hardly the normal kind of duties that a machine like this would perform, and when running general office tasks the TX2XP was as responsive as any other notebook. Perhaps when Intel releases an Ultra Low Voltage Core Duo chip Sony can put it into the TX3XP and this problem with disappear – mmmm a Core Duo T Series VAIO, I can’t wait. 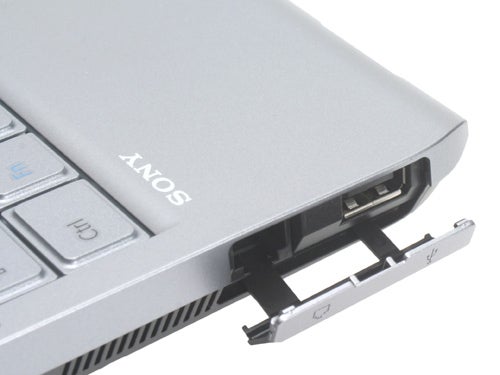 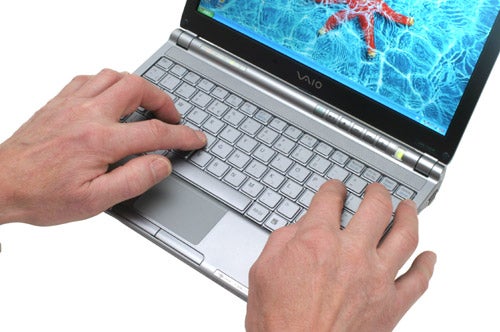 Now you may have read elsewhere that the TX2XP is whisper quiet in operation, but I’m afraid that isn’t true. OK, when you’re running under battery power it is very quiet, but once you plug it into the mains and it starts to run at full power, get ready for some quite loud fan noise. When I reviewed the TX1XP I noticed the same thing but assumed it was due to me testing a very early sample, but when I started receiving emails from readers complaining about the fan noise I realised that it was an inherent problem. Unfortunately that problem seems to have carried over to the TX2XP. Of course you can only really hear the fan when you’re in a very quiet room, and I know some people that even then don’t find it a problem. Personally I can live with it, but I can understand people who can’t.


Price wise, the TX2XP comes in exactly where the TX1XP was, at £1,699 including VAT. That’s a lot of money to pay, but you are getting a supremely thin and light notebook, complete with integrated DVD writer, not to mention Sony’s consistently excellent software bundle. The question though is whether I would buy the TX2XP and unfortunately I have to say no. This may come as a surprise to anyone that knows me, since it’s common knowledge that I love thin and light notebooks, and that I loved the TX1XP. However, there is one very good reason why I wouldn’t buy the TX2XP, and that’s the Sony VAIO VGN-SZ1VP. 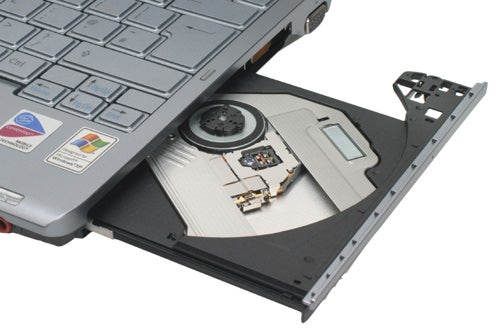 Yes Sony has managed create a new object for my desire – the SZ1VP is such a beautifully crafted and well specified notebook, that I am more than happy to sacrifice a bit of weight and battery life. Perhaps when a Core Duo T Series VAIO appears I may switch my allegiance back once more, but for now the TX2XP just isn’t a big enough step forward from the previous model for my liking.


Just like the TX1XP before it, the TX2XP is a beautiful, lightweight, slim and sexy notebook with truly astounding battery life. Unfortunately the game has moved on since the TX1XP and Sony’s own Core Duo equipped VAIO SZ1VP would definitely be my choice of notebooks right now. That said, if you absolutely have to have the lightest machine around with the most phenomenal battery life, then there really is nothing to touch the TX2XP.