While many notebook computers are beasts with huge screens and full sized keyboard, I prefer my laptops like my pizzas – thin and light. For serious work or play I prefer a desktop computer with a screen as large as possible but when on the move though I want something I can pack into a bag and not have it weigh me down.


The Sony Vaio VGN-SZ2XP that I reviewed a couple of months ago, fitted nicely into this category. It wasn’t the smallest and lightest notebook around but at 1.7Kg it was still thin and light enough to slip into a bag. It also offered some serious battery staying power to ensure that, depending on usage, it could last a working day. 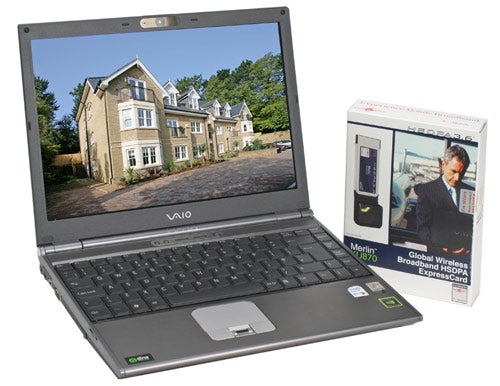 In that review I observed that the SZ2 was already outdated due to the announcment of the SZ3 with integrated 3.6Mbps HSDPA connectivity. Well, the VGN-SZ3 is now here in front of me and I was almost right – HSDPA is offered with the notebook. However, rather than being integrated, it’s offered through an Express card. Aside from the memory card reader bundled with the SZ2, this is the first Express card device we’ve actually seen.


The module is a Merlin XU870 and can be flash upgraded to 7.2Mbps when network support is up and running. That won’t be for some time though as in the UK even 3.6Mpbs networks are yet to come online. In the meantime you can connect at up to 1.8Mpbs, which is still pretty good going. By the TrustedReviews offices I was only able to get three bars of signal strength indicated by the Communication Center software and was able to download at around 114Kpbs. 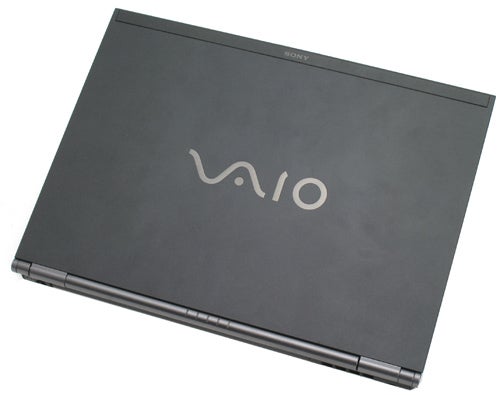 The Express Card design is smaller and easier to hold than the standard PC Card and rather than having a eject button has a more elegant spring loaded mechanism. The Merlin card has a cool angular light on it that is a regular little disco ball, flashing between red, blue and green. It’s got a small flip up aerial but it’s only a bit of plastic that’s the width of the module so I can’t imagine it being much use.


Of course a plug-in module isn’t as elegant as an actual built-in module, but to do that Sony would have had to have a new chassis made to accommodate the unit. Using an Express card means it didn’t have to make any changes to what is already a good design and enabled it to bring it to market quicker.

I won’t go into too much detail about the chassis as I’ve already covered it in my Sony Vaio VGN-SZ2XP review, but I will go over the most salient points. The first is the very thin display. This is due to Sony using an LED backlight. This enables the screen to be noticeably thinner than a conventional laptop displays that use Cold Cathode Fluorescent Lamp technology. It also means that the laptop tapers from the back to the front making it easier to hold, while the wedge shape is easier on the eye. 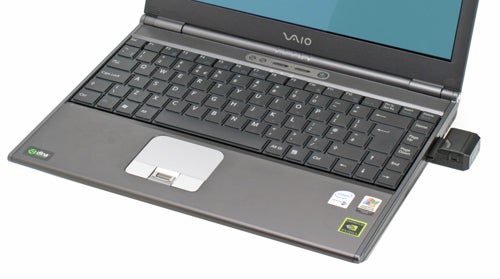 Another advantage of an LED backlight is that it produces a better black level, giving you a better image in dark scenes when watching videos or playing games. I found that it was actually less forgiving of poorly encoded videos with dark scenes as I could clearly seen artefacts – the latest Harry Potter trailer was a case in point.


The keyboard is the same Spectrum like affair as on the SZ2 – I found the keys to be a bit too springy and not as firm as I would have like them. At least their large size made them easy to hit. I found that if I pressed a little bit firmer than I would normally on the keys then I could get a good typing speed up.


One thing I don’t like is that there aren’t quite enough USB ports – there are two on the right hand side, and that’s it – which isn’t really enough for my liking.


As ever Sony is quite generous with the software bundle with some decent apps pre-installed – and SonicStage too. One feature that I made extensive use of during testing was the built-in recovery feature, which enables you to restore your notebook to its factory state easily, with an image stored on a hidden partition. It’s not a particularly quick process though, so you’ll need to be patient.


Interestingly, the SZ3 features a DLNA Certified sticker on the front. The DLNA, Digital Living Network Alliance, means that it will let you control content on a DLNA server. 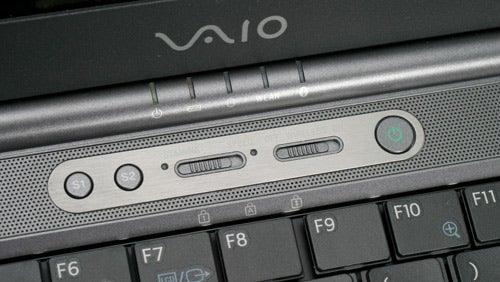 Aside from being bundled with the HSDPA Express Card the only other major change from the SZ2 is the move to a Core 2 Duo processor – the previous model featured a Core Duo. This is a T7200 running at 2.16GHz – the previous version was a 2GHz T2500. The graphics are the same – with both an Intel i945 chipset integrated graphics and a nVidia GeForce Go 7400 TurboCache chip. These can be selected by a Stamina and Speed switch above the keyboard – that’s Intel for stamina and nVidia for speed. We ran our MobileMark 2005 tests on both.

In SYSmark 2002 the overall score of 361 is an 11 per cent increase over the 323 from the SZ2 – an increase that’s not to be sniffed at. Internet Content Creation was the biggest beneficiary, increasing some 17 per cent. In PC Mark the CPU score not surprisingly increases, while the memory also goes up, due to having twice the complement of RAM in our review sample.

The MobileMark comparisons with the SZ2 are actually quite confusing. On the SZ3, I used Sony’s performance profiles to get the best combination of battery life and performance, which is what you would do if you were actually working on them. On the SZ2, I left it on more demanding settings.


This meant that even with the slightly higher power drain of the Core 2 Duo, compared to the Core Duo, the SZ3 was able to last for a massive 442 minutes in stamina mode – that’s 7.3 hours running office apps. That’s with the profile set to Ultimate battery, which turns off all components not essential for the tasks in hand, such as networking or the DVD drive. 442 minutes is pretty impressive. It’s still less than the Sony VAIO-VGN TX3XP that eked out over nine hours from its Core Solo processor. However, considering the far greater power of the Core2 Duo it’s still very impressive, though inevitably the Core 2 Duo would have been heavily throttled down during battery testing by the Sony Ultimate battery power profile.


As the SZ3 is about £200 more than the SZ2 it doesn’t feel as if you’re getting the HSDPA Express card for free. It’s still worth it though as it really opens up mobile computing. No need to hunt for hotspots- just open it up and signal strength permitting, you’re online.

This is where the long battery life really comes into its own. Of course, if you’re running with the Express card you’ll be draining power much faster but it’s good to know your starting point is a lot higher than most notebooks.


It may look identical to the SZ2, but the bundle of an Express card based T-Mobile HSDPA module is a great feature – especially when the 3.6Mbps networks come online in the first half of 2007. Furthermore the extra power of Core 2 Duo is most welcome making the increase in price over the SZ2, quite easy to deal with.