It’s no real secret that we’re big fans of ultra portable notebooks on TrustedReviews and one of the finest exponents of the genre is undoubtedly Sony. The big S may be suffering in many areas, but judging by the VGN-SZ2XP it hasn’t lost the art of creating highly desirable notebooks. The SZ series isn’t Sony’s smallest line of notebooks, that honour being taken by remarkably dinky TX line, which also offers the greatest battery life. However, the TX line can only manage a single core chip while the slightly larger form factor of the SZ enables Sony to pack in dual-core power. You also get a larger 13.3in screen though admittedly the resolution is actually slightly lower at 1,280 x 800, rather than 1,366 x 768. The other benefit of the larger size means that you don’t have to pay the premium that extreme miniaturisation provides – this SZ2XP comes in at just over £1,400, while the weight is 1.7Kg, still in ultra-portable territory. All in all this it seems like a win-win situation, so I was hopeful that a closer inspection wouldn’t change my mind. 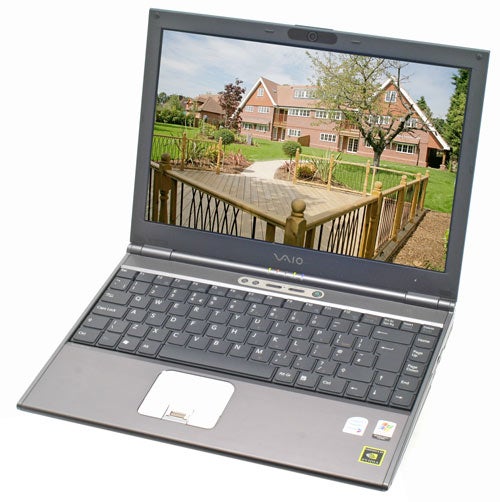 First impressions of the SZ2XP are excellent. With the lid closed I was immediately taken in by the sleek carbon fibre appearance and the VIAO logo seemingly carved out on the surface. So many notebooks have a plastic feel to them but this Sony has a very pleasing smooth finish. The notebook tapers from a thin edge at the front to a thicker base at the rear. Pick it up from the front and it’s literally the thin end of the wedge. There are five indicator lights built into the circular hinge for power, battery, hard disk, and separate ones for Wi-Fi and Bluetooth. These can be seen even when the lid is closed. The lid closes gently with a magnetic lock to keep it shut.


Open up the notebook and you’ll find a smart brushed metal grey area beneath the keyboard, which looks great. Above the keyboard you’ll find a central area containing two programmable shortcut buttons. These can be used for more than just launching the application of your choice but also for specific functions such as going to maximum brightness or reducing CPU fan noise. There’s a slider switch for turning the Wi-Fi and Bluetooth (version 2.0) off together and a power button. The other sliding switch is interesting. Its labelled Stamina on the left and Speed on the right. This is because the Sony actually contains two different graphics chipsets – an integrated Intel chip and also an nVidia GeForce Go 7400, for a bit more graphics oomph at the expense of battery life. Inevitably, you have to restart to go from one to the other but it’s great to have the choice. 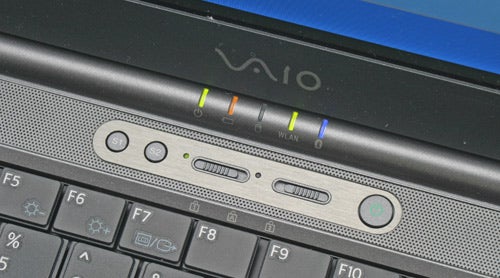 Surrounding these buttons is a grille that contains the speakers. The output is reasonably bassy and loud for integrated speakers but nothing really to write home about. Below the keyboard is a straightforward silver trackpad and two smallish left and right buttons. I do get peeved by plasticy buttons but these have a good metallic feel and respond with an audible click. Between these buttons is a fingerprint reader enabling you to swipe instead of type to enter passwords. You can use this to log onto Windows and to enter information into forms – it’s quite slick.

The keyboard itself is distinctive looking and immediately made me think of an eighties Spectrum computer. The keys are quite wide and each one has a raised central area, presumably to make each one easy to hit, but also to provide space between the keys so that they don’t interfere with each other. This worked well but I did have a consistent problem in getting the space bar to work so I kept having to go back and add in spaces. However, Riyad gave it a go and had no problems so it could be down to my typing style. In terms of layout and arrangement I was happy.

The screen on the SZ is impressive as it uses an LED backlight. This has a number of benefits. It allows for a thinner display than conventional LCD screens, has a greater colour gamut and helps extend battery life. It’s certainly very bright at the maximum setting and the only disappointment was that the relatively modest 1,280 x 800 resolution.


At the top edge of the bezel you’ll find a webcam. The maximum resolution is only 640 x 480 but if you ever need to communicate via video when you’re on the move for business or personal reasons you’ll appreciate not having to mess around with an external camera. It works well enough and a yellow light next to the lens indicates when it’s running. 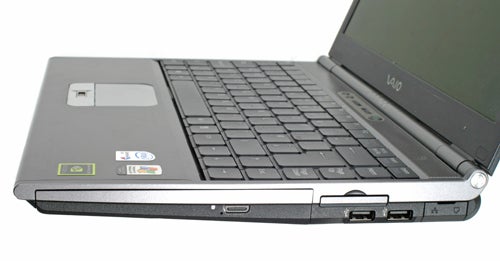 The front of the notebook is featureless providing a smooth curved front to the notebook. On the left hand side you’ll find from front to back, a Sony Memory Stick reader, a PC Card slot, a VGA output, a mini- FireWire port and at the back a microphone and headphone socket. The battery takes up most of the rear, with the CPU exhaust fan and a power socket at either edge. On the right hand side you’ll find an integrated optical drive capable of burning dual layer discs. It may not be the smallest Sony notebook with an optical drive but it still feels like an achievement. Behind this there is a Express card slot, and Sony has actually provided something to fill it with – a memory card reader so you can plug SD, MMC and xD straight into the notebook. It also takes Memory Stick. This means that should you need to you can access two memory sticks at once. Below this are two USB 2.0 ports, which is actually not very many – the only real concession to the size of the notebook here. At the corner edge you’ll find a modem port and a Gigabit capable Fast Ethernet controller.


Inside the thin chassis the notebook is powered by an Intel Core DuoT2500 – 2GHz of dual-core power – still impressive in something so thin. There’s 1GB provided, which is enough to get started with and sensibly this has been provided on a single DIMM. A recommended upgrade would be to add a second 1GB DIMM – you’ll get a performance boost from 2GB of RAM and the fact that with two DIMMs the i945 chipset will be able to run in dual-channel mode.

So how does it perform? We compared with a recent ultra portable champion, the HP nc2400. This is a much more corporate beast, it’s half a kilogram lighter and sports a 1.2GHz CPU ultra-low voltage. On the Sony, we ran the tests using the faster nVidia GeForce chip. In SYSmark 2002, it comfortably outpaced the HP in every test, which is what you’d expect from the faster CPU. The choice of graphics chip in the Sony will pay dividends if you want to be able to play the occasional game – World of Warcraft or TrackMania will run comfortably on the Sony. You won’t want to do that on the HP. 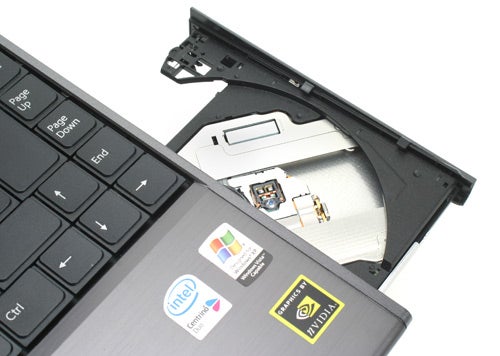 If you then switch to the Intel chip then you can enjoy some quite impressive battery life – 301 minutes is five full hours and nearly four hours for the DVD playback. Sony has some excellent power profiles with the ‘Ultimate’ one turning off the DVD drive, and the networking in Device manager so that they’re not polled by Windows, helping to eek out more battery life.


However, the HP has a truly fantastic keyboard, while the one on the Sony is just Ok. The HP has three advantages, it’s small and light, it’s got a great keyboard and it’s a lot cheaper. You can go for an extended battery life on the HP nc2400 it would still be cheaper and lighter than the Sony. Why go for the Sony then? The HP is a good notebook but the Sony has sheer desirability on its side. Of course, you have to weigh up the balance between desirability and practicality.


What would push things back in the Sony’s favour was if it had integrated 3G. Sure enough as I was writing this a press releases popped up in my inbox announcing the launch of the SZ3XP – with an integrated HSDPA module from T-Mobile that connects at an amazing 3.6Mbps. This rather steals the thunder from the SZ2XP. 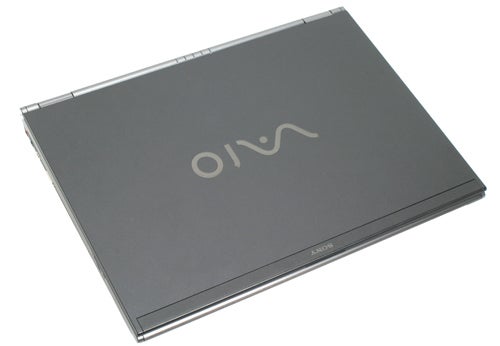 I can’t complete the review though without a mention of all the software that’s preinstalled on the notebook. From Symantec you’ll find Norton Ghost and Norton Internet Security. However, I find the latter a teeth grinding app and I’d rather uninstall it than use it. Adobe provides the excellent Adobe Photoshop and Premiere Elements. Google has Picasa2, Google Talk and Google Earth pre-installed. InterVideo WinDVD is there for DVD playback. There’s also a handy recovery utility. It’s certainly an impressive package and it’s good you can just fire up your Vaio and use it with some power apps without having to do any purchasing or installing of extra applications.


Overall the VGN-SZ2XP can be viewed in two ways. It’s either a fine mix of power and portability, or it looks oversized and over priced compared to the competition. It’s certainly a fine looking machine but I have my concerns with the keyboard. Ultimately, the decision comes down to whether you need its performance on the road. If you want that added flexibility and love the looks it’s a good choice, otherwise go for the more honed HP nc2400. That said, I’d still recommend holding off and waiting for the SZ3 with integrated high-speed 3G.


A great looking notebook with excellent performance and battery life. However, it’s on the pricey side and HP’s nc2400 is significantly lighter and cheaper, while its replacement with integrated 3G is already on the horizon.