Laptops have become something of a commodity item. While Asus has been re-defining the market with the Eee PC, it’s easy to forget it has been possible to get hold of very cheap notebooks (albeit not as small) for quite a while now. Hell, there have even been some free notebook deals floating around and a quick look at our own shopping section shows a large number of notebooks available for less than £300. Of course, these are all very basic machines but spend a little more and you’re still looking at a dual-core CPU, while upwards of £500 should offer up some very decent notebooks. 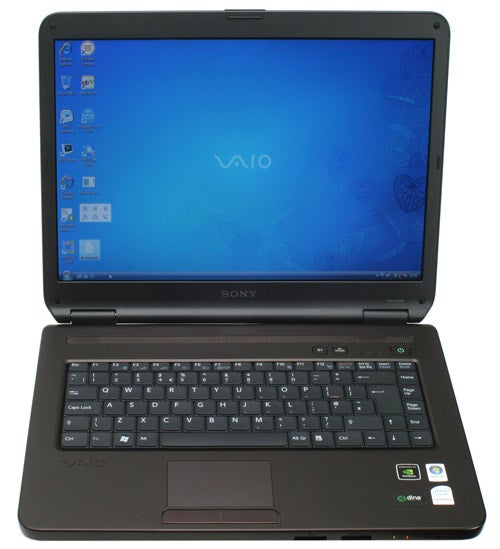 However, Sony is one company you wouldn’t normally associate with great value notebooks. Sleek? Yes. Good looking? Yes. Desirable? Yes. Cheap? Not so much. Hold on, though, because it does in fact have a value line of notebooks, the NR Series, which starts at just under £500 and ends at the top-end with an SRP of £700. It’s the higher end of this range we’re looking at today, in the shape of the Sony VAIO VGN-NR21Z/T.


Billed as a no frills 15.4in notebook Sony has nonetheless tried to make it look a little more than ordinary, though in truth it’s still no stunner. Our sample is the brown version, while there is also a white version with the exact same specification. Regardless of colour both systems have an unusual textured finish on the outside that continues on the inside, though the bezel surrounding the screen resorts to a fairly ordinary grey plastic. 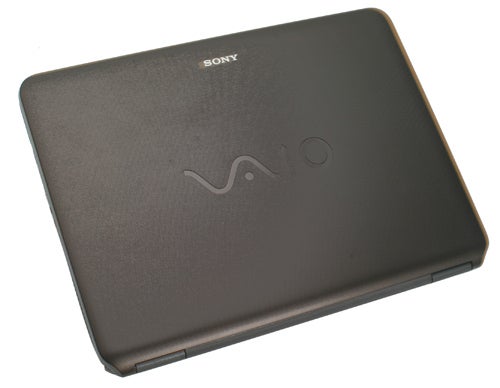 From this description you might imagine this is an ugly machine but that’s not the case, it simply lacks any of the flair found on the likes of the Dell Inspiron 1525 and rather goes for a more sleek and simple approach. This works, to an extent, but it’s never quite as convincing as any of Sony’s other efforts, or even the consumer friendly models from the likes of HP.


As far as size goes it’s a 15.4in notebook, so it’s neither the most portable or least portable out there. It must be noted, though, that it weighs more than the Inspiron 1525 at just a fraction over 2.9kg compared to the 2.7kg of the Dell. It’s a shade thicker too, with a minimum of 31.4mm growing to 37.9mm at the thickest point in its wedge shaped design. This, compared to the 25 to 37mm of the Dell, makes it noticeably chunkier, though not unpleasantly so. 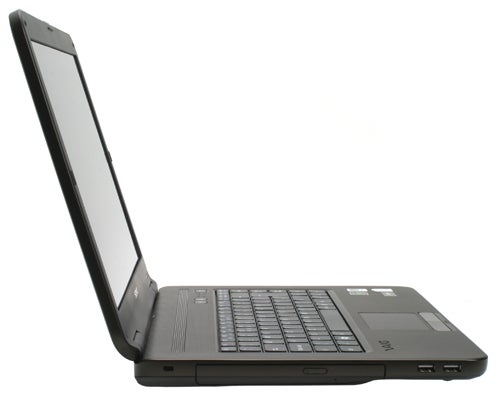 Indeed, though it is heavier and thicker than the Dell its rounded edges make it pleasant to handle. In use the large and friendly touch pad is great, though the keyboard is something of an acquired taste. It has an excellent layout but it has flat rather than tapered keys. Some people – myself included – may find this makes it easier to hit the wrong key by mistake, though equally others find the opposite to be the case. It’s been the cause of some argument in the office, so unless you have experience of this kind of keyboard already and either love/hate it then it’s worth seeking out a Sony retailer to try it out for yourself.

Another important aspect of any notebook is the display and again the Sony is something of a mixed affair. It has an unremarkable 1,280 x 800 resolution and an ever more common glossy “high contrast” finish, but this is no substitute for a quality panel and the one here is merely average. For most purposes it does the job fine but it’s not the brightest or most vibrant display, while the low resolution on a relatively large display means it’s not all that sharp either. 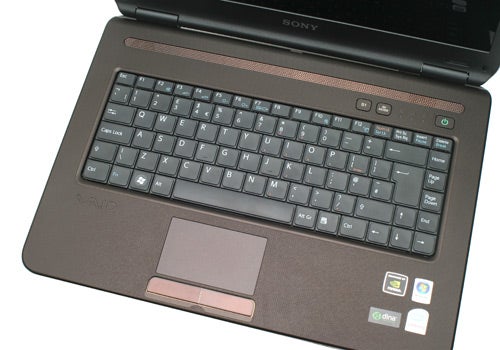 Internally, though, you’ll find a notebook capable of dealing with most things the average user is likely to throw at it. At its heart is an Intel Core 2 Duo T8100, one of the new breed of 45nm Penryn CPUs that runs at 2.1GHz with an 800MHz Front Side Bus and 3MB L2 Cache – see Inside Mobile Penryn for more details. Sony has also included a generous 3GB 667MHz RAM, though it’s configured in 2GB and 1GB sticks so you don’t get the benefit of dual-channel memory support. A 250GB 5,400 rpm hard drive means you shouldn’t be lacking for storage space, though.


Unlike the Dell, with its integrated graphics only approach, the NR Series also comes equipped with discrete graphics in the shape of a 128MB nVidia 8400M GT. This does have some benefits but it’s not really fast enough for gaming and without a Blu-ray drive its superior video processing is somewhat moot. Moreover, since its power requirements are greater, it means this system can’t touch the battery life offered by integrated graphics.

In addition you get Intel Draft N capable wireless, 10/100 Ethernet and Bluetooth, so you’re network connectivity is well catered for. Four USB ports are evenly spread on both sides of the chassis, while on the on left edge you’ll find a fairly standard 8x DVD+/-RW optical drive. As this is a Sony there’s a dedicated memory card slot for MemoryStick, along with one for SD and MMC – both on the front. There’s also a hardware wireless on/off switch.


Meanwhile, on the right, you’ll find a 34mm ExpressCard slot, a mini-FireWire port, headphone and microphone jacks and a D-SUB (VGA) output. There is, however, a fair amount lacking in this arrangement. There seems little argument for not fitting in a 54mm ExpressCard slot rather than the 34mm offered, while there’s no S-Video or HDMI output either.

There’s also no webcam, a fairly significant oversight in any notebook these days. It also lacks some of the niceties found in Dell’s offering like the ExpressCard remote and infrared receiver for said remote. None of these factors in and of themselves means you shouldn’t consider the NR Series, but it’s noticeably less flexible and feature rich than its competition due in no small part to Sony having another 15.4in range with these features already included.

It is clear that Sony is trying to stop this machine from competing with its more expensive sibling, the FZ Series. Fine on paper, perhaps, but Dell has moved the goalposts of what to expect from a “cheap” notebook and the VAIO VGN-NR21Z/T and the rest of the NR Series can’t match it. Dell’s Inspiron 1525 is even cheaper, with a near identical configuration available for as little as £570, while the likes of the Acer Aspire 5920 still give a good account for themselves.

For performance testing we ran our usual set of benchmarks, including PCMark Vantage, our in-house Photoshop Elements and VirtualDub tests and MobileMark 2007, which was miraculously working on this occasion! Unfortunately our results were skewed somewhat by the fact our test system came with a 2.4GHz T8300, rather than the 2.1GHz T8100 advertised.


Despite this one can expect good performance from the VGN-NR21Z/T, with the T8100 boasting an extra 100MHz clock frequency and an extra 1MB L2 Cache over the T7250 found in our sample of the Inspiron 1525. Moreover, with 3GB of RAM on-board as well there’s little you shouldn’t be able to do. In addition, as shown in our results, installing Vista SP1 did provide some marginal performance improvements, though nothing too dramatic.

Battery life is solid too, though nowhere near the heights of over four hours managed by the Inspiron 1525. In the Productivity test it managed just a fraction over three hours, while the lower intensity Reader test ended after three hours and 10 minutes. DVD playback is pretty good too, with a result of two hours and seven minutes at full screen brightness.


In most respects, then, the VGN-NR21Z/T is a solid and well put together notebook. But, though it’s cheap compared to some of Sony’s notebook options, it sacrifices a lot to generate this sense of value. It lacks a webcam and S-Video or HDMI outputs and though it has a generous specification, the excellent Inspiron 1525 is available for less and includes many of the features missing here. 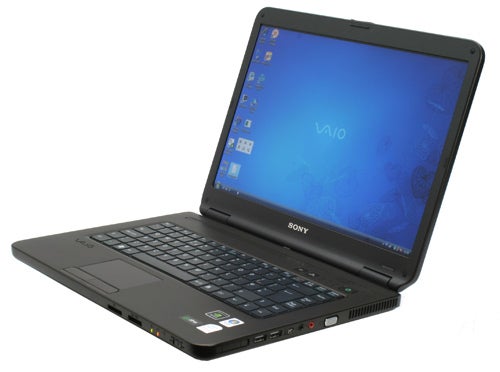 
Lacking the stylish touches of Sony’s more expensive offerings, the VGN-NR21Z/T sacrifices a little too much to hit a more affordable price point. If you want a basic and capable notebook then it’s worth considering but it’s overshadowed cheaper and better featured competitors. Not bad, but not outstanding either. 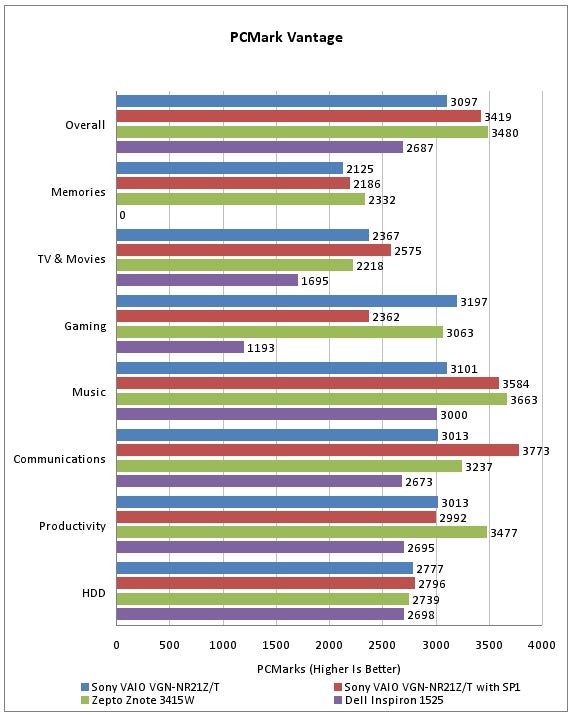 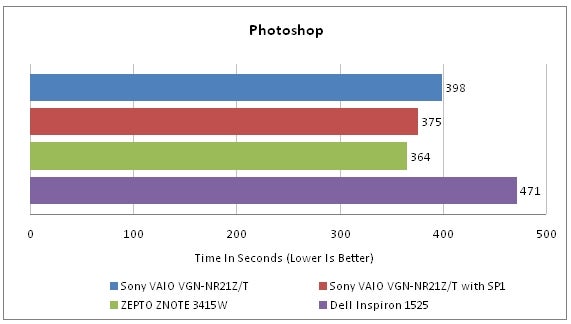 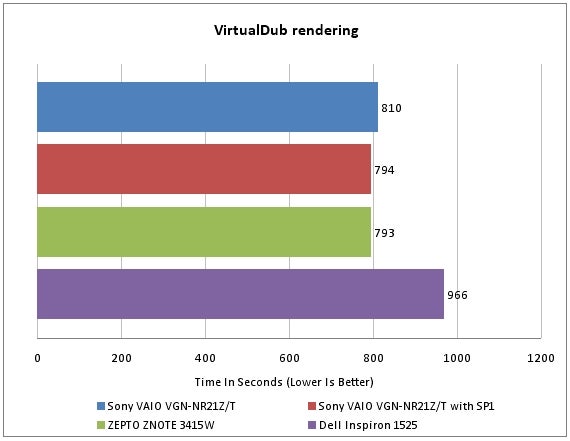 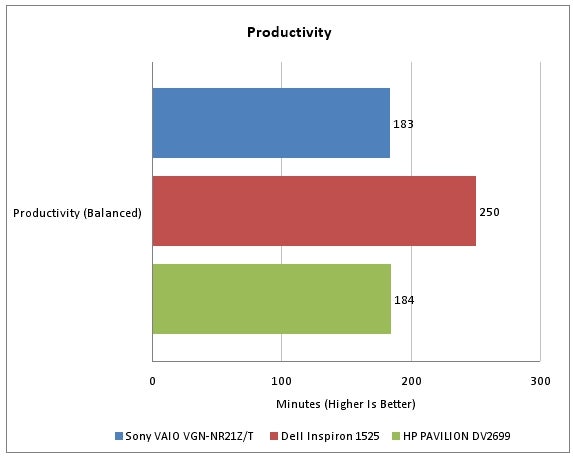 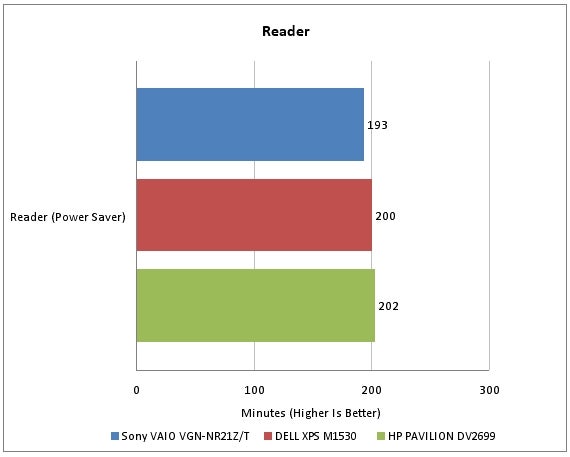 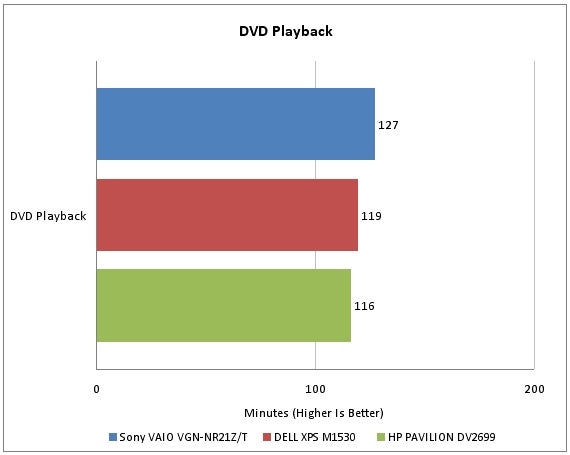