Now that there’s only one high definition format to worry about it’s a lot safer to invest in Blu-ray equipment. This, of course, goes for notebooks as well and there’s a fair amount of choice. Dell, for example, is making it an option on most of its lines, while Acer has launched its Gemstone Blue line of entertainment notebooks. Unsurprisingly, Sony is a major player too and its FZ Series of 15.4in notebooks all come with Blu-ray drives included. Today we’re looking at the top of the range model, the £1,100 VAIO VGN-FZ31Z. 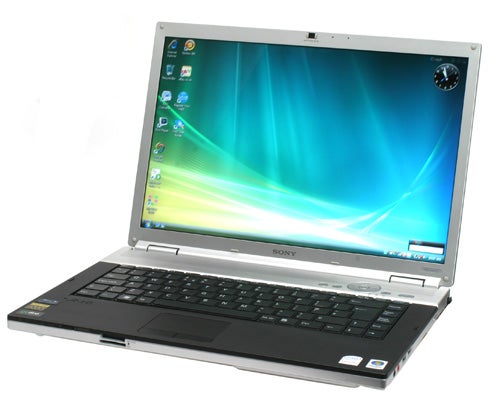 Design wise the FZ series hasn’t changed at all since the last time we looked at it, back with the FZ11L, and though it only got six out of ten then, it was the feature set and price, not the chassis, that was the disappointment. Although we’ve become accustomed to 15.4in laptops becoming slimmer and lighter, the FZ is still very impressive in this respect. Weighing a manageable 2.7kg it has an ever popular wedge shaped design that gives it a minimum thickness of 24.9mm, though even at its chunkiest point it’s only 34.5mm.


This slimness is continued to the bezel of the screen. Even with the integrated 1.3-megapixel WebCam and dual microphones it’s still appreciably thin, giving the 16:10 ratio 15.4in screen a greater sense of size. Of course, this 16:10 ratio could also prove a disadvantage, with 2008 likely to become the year that 16:9 ratio, 16in and 18.4in screens become the norm. 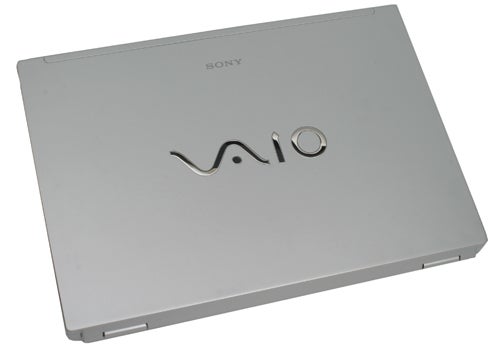 All the same it still looks good and with its largely silver plastic finish exudes a sense of style and simplicity that’s typically Sony. Inside, just above the keyboard, is a smart and uncomplicated playback control dial with Next/Previous set to left and right, volume control to up and down and Play/Pause button sitting in the middle. Just to side of this is the Stop button and this is joined by a couple of other shortcut keys and the power button. All of these buttons are set into a brushed metal panel with the keyboard and wrist rest below finished in graphite grey/black plastic.


Speaking of which, the keyboard is a very good one. Keys are well arranged with none of the problems that often befall notebooks, and keys themselves have a solid feel, crisp response and even travel. Just below, the touchpad is nicely integrated into the chassis and though the lack of demarcation for the scroll zones is a tad annoying, it’s not a fatal problem. 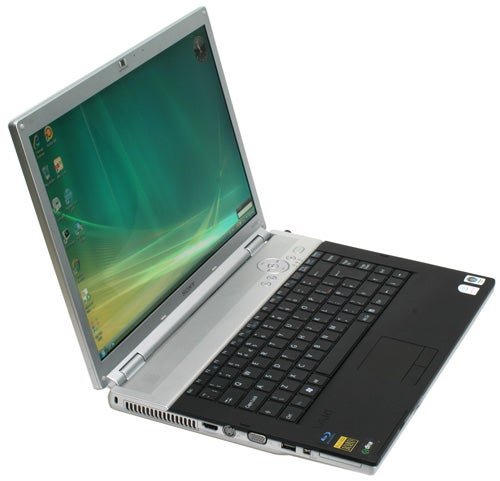 All in all it’s a pleasingly cohesive look; lacking the over the top chutzpah of many laptops and maintaining Sony’s reputation for refined looks. That it lacks any of the glossy detailing so popular among many manufacturers is another distinct bonus. Not only is the FZ less likely to lose its looks in the distant future, you won’t have to spend every waking moment wiping off fingerprints.

Given the fairly sizeable price you’d expect a generous specification and largely the FZ31Z doesn’t disappoint. Powered by an Intel Core 2 Duo T8300, which runs at 2.4GHz with an 800MHz front side bus and 3MB L2 Cache. It also has 4GB 667MHz RAM and a 256MB nVidia 8600M GS for graphics. Unfortunately you only get a 32-bit Windows Vista Home Premium OS, so only 3GB of that RAM gets used. As for gaming, the 8600M GS will give you some limited gaming potential, but it lacks the necessary memory and processing power for most modern titles. 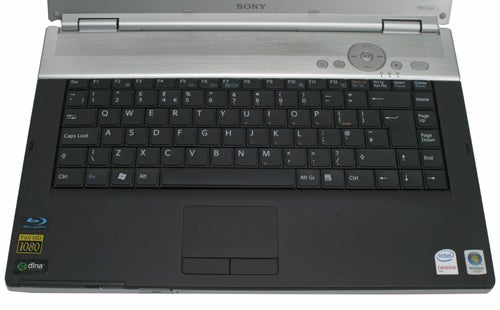 Still, the 2.4GHz CPU should make mincemeat of most everyday applications and feature wise there’s plenty to enjoy. Wireless-N Wi-Fi makes it in there, as does HDMI output and Bluetooth 2.0+ EDR. Obviously there’s the Blu-ray drive and it’s a recorder too, so you could burn superfluous data to those capacious optical discs – though a portable hard drive might be a bit more practical!


Not that you’re likely to run out of space too quickly because you’ll benefit from a 300GB hard drive. It’s more than big enough for sizeable collections of photos, videos, music and plenty else besides, though the only downside is that it’s a relatively slow drive, spinning at only 4,200rpm and this does have some impact on performance.

Connections, in modern terms at least, are fairly standard. You get three USB ports, four-pin FireWire and a 34mm ExpressCard slot, while video connections include D-SUB (VGA), S-Video and an HDMI output. On the front edge there are two memory card readers, one for SD cards and derivatives and another supporting Sony’s own range of memory cards.


Perhaps the key feature of the FZ31Z, though, is the screen. It uses what Sony calls “double lamp technology” that allows for a higher than normal colour gamut, in this case 90 per cent NTSC. As a consequence it’s a very vibrant and colourful screen. In fact, sometimes it can appear slightly over saturated, but it certainly brings video to life, with decent black levels, little light bleed and impressively clean whites.

Unfortunately, audio performance isn’t anywhere near as impressive. Integrated just above the keyboard the speakers are simply rubbish. Tinny, lacking bass and easily distorted, there’s little edifying about them and they make owning a good set of headphones or desktop speakers a necessity. When compared to the excellent speakers on the Toshiba Satellite A300, they’re a severe disappointment and one that calls into question some of this machine’s multimedia aspirations.

Another area of weakness, and one that scuppers any ideas of using the FZ31Z on the move, is the poor battery life. In the MobileMark 2007 Productivity test it manages just in excess of two and a quarter hours, with the Reader and DVD tests coming in at two hours and 26 minutes and a very poor one hour and thirty-seven minutes. None of these results compares favourably to what we’d normally expect and without doubt the extra power required for the double lamp backlight has a major part to play here.

Application performance is far more positive. In most tests the FZ31Z performed very well, though as noted previously the slow hard drive means it gets bogged down when dealing with multiple tasks. Our in-house tests also showed that batch image editing and video creation is very fast, so anyone interested in photo editing or video authoring will find this machine more than capable.


But this performance isn’t enough to assuage some doubts we have about this particular model. Though the screen is without doubt a good one, the cost in battery life for a 15.4in notebook is little too high for comfort. This puts a significant dent in any advantage it might have over larger 17+ inch notebooks that have a similar multimedia focus but benefit from generally superior audio and larger viewable area. 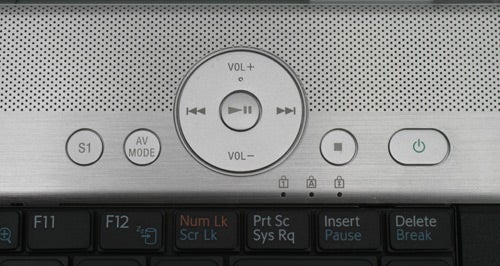 Alternatively, if it’s a 15.4in you really want, you’re probably better off looking at the likes of the Dell XPS 1530. This is available with Blu-ray a drive and though its speakers are equally unimpressive, it is arguably more attractive and obviously benefits from the customisation possible with Dell. Moreover, it’s also slightly cheaper at £940 inc. VAT for similar components and a larger and faster 320GB 5400rpm hard drive. Plus, with the money saved, you could upgrade to a 1,440 x 900 or even 1,920 x 1,200 resolution display.


On the flip side, there are other notebooks in the FZ range, such as the VGN-FZ38M, which arguably offer a better balance of features and price. Though lacking the high colour display, it won’t suffer the battery life gremlins seen here and the lack of faster graphics isn’t a huge loss in the greater scheme of things. 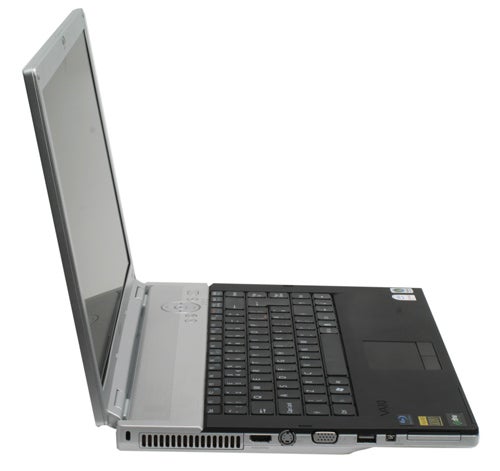 
Despite initially impressing with smart design and good features, the FZ31Z is let down by poor battery life and appalling integrated speakers. It’s still a good machine in many respects, but other 15.4 inchers offer a better balance for less money, while larger notebooks can boast stronger multimedia credentials. 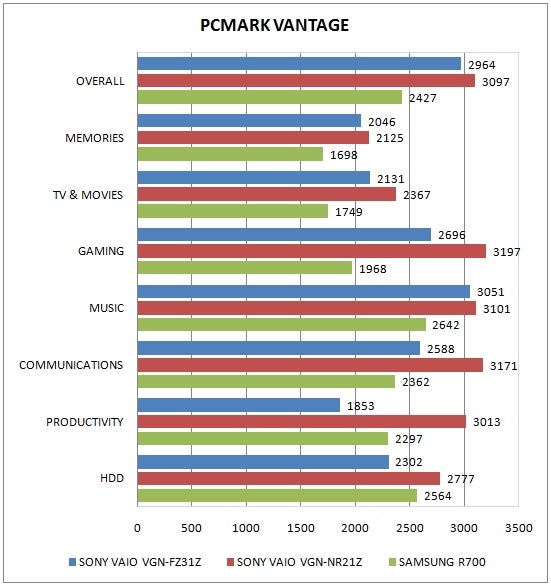 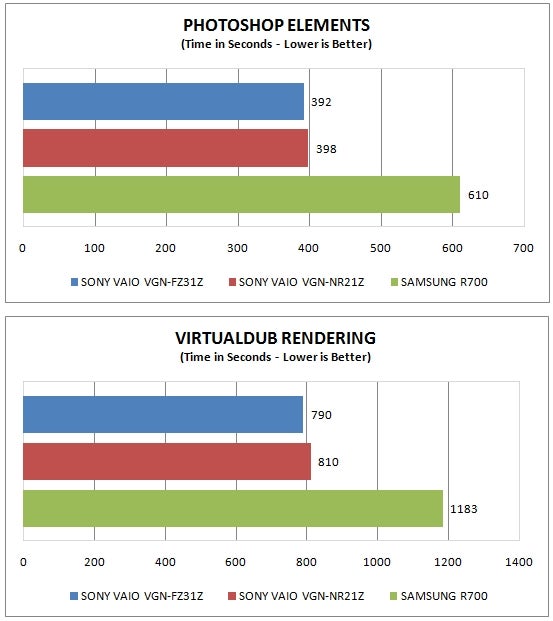 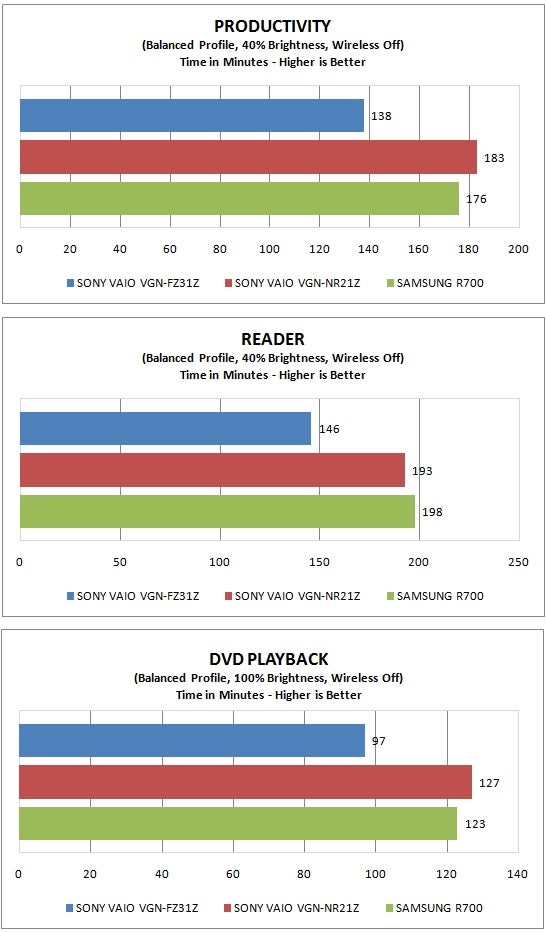