Not only is the VGN-FS115B the first notebook in Sony’s FS range to make it into the TrustedReviews lab, but it’s also the first machine I’ve seen based on Intel’s new Sonoma platform. Intel launched Sonoma as the next generation Centrino standard back in January, and it brings with it some key advantages over the outgoing technology.


The major advancement with Sonoma is PCI Express support, but you also get dual channel DDR2 memory support, a 533MHz FSB, Serial-ATA support and a raft of new processors. The VGN-FS115B incorporates the new Sonoma technology, but sticks with the integrated Intel graphics, rather than going with a PCI Express solution from either nVidia or ATI.


Inside the FS115B is a 1.6GHz Pentium M CPU and 512MB of memory – although Sony has decided to go with DDR rather than DDR2 memory. Sony has made use of the dual channel memory support and installed two matched SODIMM modules. The down side of this is that you’re left with no spare memory slots for future upgrades, although 512MB should be fine for most users of this type of notebook. If you do think that you’ll need more memory, it’s probably worth negotiating an upgrade at point of purchase.


There’s a 60GB hard disk which provides a decent amount of storage space, although it only has a spindle speed of 4,200rpm. If you do want to free up some space on your hard disk, you can offload some of your data using the integrated DVD writer. This drive will write to DVD+R DL, DVD+R/RW, DVD-R/RW and CD-R/RW discs.


It comes as no surprise that the FS115B looks great, after all, most Sony notebooks do. The FS115B may not be the smallest or lightest notebook in Sony’s range, but it is still very slim. The silvery/grey lid sports a mirrored VAIO logo as well as a small Sony logo. Opening up the lid reveals a 15.4in widescreen TFT display. The screen looks great, enhanced by the X-Black finish to produce a very bright and vibrant image. The resolution of 1,280 x 800 isn’t the highest I’ve seen on a 15.4in widescreen display, but it’s still pretty good to work with. The widescreen aspect ratio and X-Black finish make the FS115B ideal for watching movies too, but playing games is pretty much off the menu, due to the integrated Intel graphics chipset.


Below the screen you’ll find two stereo speakers, which produce reasonable sound, but like most notebook speakers, they’re nothing to write home about. Below the speakers are two programmable buttons and the power button.


The keyboard looks very flat and uninviting, but once you start typing on it you’ll find that it has a lot of spring to it. There isn’t quite as much travel as I’ve seen on other notebook keyboards, but at least each key feels individual and there’s no keyboard flex. The touchpad is also a pretty good example, and mirrors the wide aspect ratio of the screen. Below the touchpad are two silver buttons, but no scroll button. However, the right side of the touchpad can be used to scroll up and down through long documents or web pages, despite the fact that there is no indication of this.

The right side of the chassis is stacked with features – there’s the power socket, a D-SUB port, three USB 2.0 ports, and a four-pin FireWire port. There’s also a single Type II PC Card slot, which has a spring loaded flap rather than a spacer, saving you the hassle of losing the spacer when you’ve got a card in there. Finally there’s a Memory Stick Pro card slot, complete with a sliding cover to stop any dirt getting in there.


At the front are microphone and headphone sockets, along with a hardware switch for the integrated 802.11b/g wireless network adapter. I always like to see a switch for WiFi adapters, since you don’t want it running when you’re not using it and draining the battery.


On the left is the DVD writer, the modem socket and an Ethernet port for the 10/100 network adapter. And with the battery taking up most of the rear of the casing, that just about wraps everything up.


As usual, Sony has thrown in a generous bundle of software into the pot. The Adobe Companion Pack is always good to see, comprising Photoshop Elements 2.0, Premier Standard, Photoshop Album Starter Edition, Acrobat Elements 6.0 and Acrobat Reader 6.0. There’s also Norton Internet Security to give you some peace of mind while working online, while a copy of Microsoft Works will get you productive straight out of the box. There’s also Sony’s usual slew of Sony applications like SonicStage for music managing and SonicStage Mastering Studio for digitising analogue music.


Performance wise, the FS115B turned in some reasonable numbers. Running SYSmark 2002 it turned in an overall score of 194, which compares pretty well to the similarly priced Acer TravelMate 3201XMi. Running MobileMark turned in a very disappointing battery life of 117 minutes, but having tested Sony notebooks before I know that turning off VAIO power management has a big effect on battery life. I ran MobileMark again, this time enabling VAIO power management, and choosing a screen backlight level of four (which was still perfectly readable in all lighting conditions). Under these settings the FS115B turned in a far better battery life of 169 minutes, although this still isn’t amazing by Centrino notebook standards.


With dimensions of 364 x 265 x 36mm (WxDxH) and a weight of 2.9kg, the FS115B doesn’t sound too slim and sexy on paper, but don’t let the figures put you off. When you see this machine in the flesh it really does look and feel great, and it definitely doesn’t feel too heavy when you slip it in your bag either.


I did a straw poll around the office when the FS115B arrived and asked everyone to guess how much it cost – guesses ranged from around £1,300 up to around £2,000. It seemed that everyone was as shocked as I was when they found out that you can pick up this slim and stylish VAIO for only £915 on the street. With this price in mind, the FS115B represents a real bargain, especially when you consider the cutting edge technology inside it.


The VAIO VGN-FS115B marries the latest mobile technology with a design that looks slim and stylish, but is still large enough to be used as your sole computer. But it’s the price that makes this machine truly impressive and it proves that you don’t have to pay through the nose for a big brand laptop these days. If you can live with the decidedly average battery life, the FS115B is well worth a look. 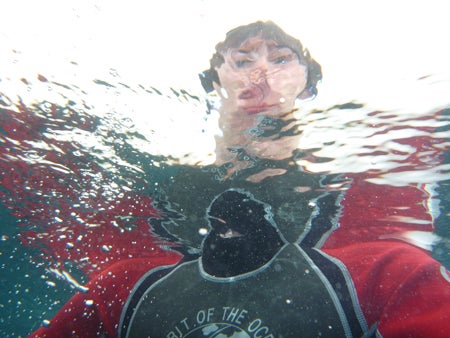