Style is a funny thing, especially in that functionality is often sacrificed at its altar. Case in point is the new VAIO CS Series VGN-CS11S/W notebook that’s the subject of today’s review. Now don’t get us wrong, we love a bit of style, and as you can see from the recently reviewed Z Series (Sony VAIO VGN-Z11WN/B) and the range the CS Series replaces, the CR Series (Sony VAIO VGN-CR11Z/R), Sony is no stranger to marrying great form with great functionality. 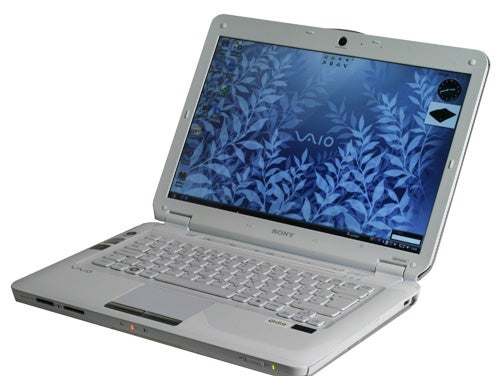 Unfortunately, the VGN-CS11S/W looks likely to put a bit of a dent in the famed VAIO reputation. Initially, things don’t seem too bad. Aimed primarily at teenagers and young adults, it’s a moderately stylish notebook with a 14.1in screen that offers a nice balance between screen size and portability. With an Intel Core 2 Duo 2.26GHz, a 320GB hard drive and 4GBs of RAM it is hardly underpowered and a range of colours, including black, pink, brown, red and the white model we’ve got our grubby mitts on, mean you can make something of a statement with your choice.


Then comes the price: £800, or £880 direct from Sony. Even considering the reasonable basic spec this is a lot of money, but you expect to pay a premium for a premium product, right? Undoubtedly, yes, but the problem here is that the CS11 is far from a premium product. 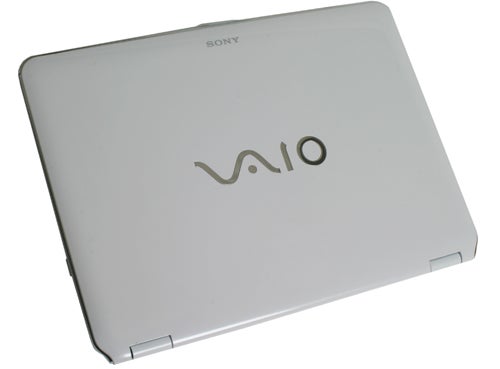 Things start reasonably enough. It’s fairly attractive when closed, with the white glossy plastic contrasting nicely with a faux-chrome trim and the curvy VAIO logo. It doesn’t seem very slim, mind you, but it has just enough visual appeal that you might not mind. But the problems begin with build quality, or rather, the lack thereof. Indeed, if it weren’t for the VAIO and Sony names on the chassis, you’d have a hard time believing this is a product from the same manufacturer as the Playstation 3 due to the shockingly poor construction. All the plastics used feel cheap, flexing and creaking under pressure, while the battery is so loosely seated that it rattles when you move the machine about.


Opening the lid up is accompanied by another healthy dose of creak, though the hinge seems sturdy enough – unlike the hinge housings. Like the rest of the notebook, style-wise it’s pretty enough, with some clean and crisp lines, but it lacks the refinement and elegance seen in other Sony notebooks.

This is particularly evident in the perforated speaker surround that runs above the keyboard. It simply looks and feels rather cheap and this is a shame since the media controls inset within it form one of the better touch control implementations you’ll see.


A good example of this prowess is the volume controls. Plus and minus icons are located six centimetres apart, enabling you to move your finger lightly anywhere between these to make adjustments. A trail of white LED lights will follow behind the movement of your finger, which is a really nice effect that makes using it more pleasant and practical. Unfortunately, the ‘beeps’ that accompany this use are not as appealing and can only be silenced by muting the laptop’s volume.

At the centre of the media strip a shortcut button labelled ‘AV Mode’ brings up VAIO Launcher, where you can set various programs for viewing photos, DVDs, web-browsing and listening to music. If you know your way around Windows this is little more than a gimmick, but for novices it might prove useful. 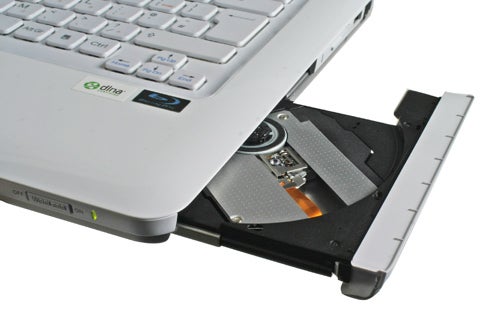 To the left of the multimedia strip is the ‘Capture’ button, which brings up the webcam software, while to the right resides a plain power button that’s stamped with an eye-catching, if slightly unimaginative, green power symbol.


Another design feature is the LED strip along the bottom at the notebook’s front, just below the touchpad. This fluctuates subtly between white and pale blue in sleep mode and various colours when in standby, but remains off when the notebook is in use. This is pretty enough to look at but is fairly inconsequential, especially given you can’t customise it at all. 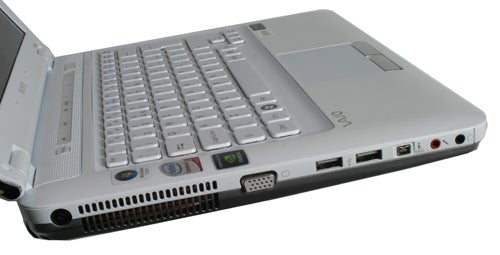 Having bemoaned some of the build quality, the connectivity is also nothing to write home about. On the left is the power socket, a VGA port, two USB sockets and mini-FireWire, in addition to 3.5mm audio jacks. At the front, meanwhile, there’s Sony’s proprietary MagicGate Pro slot and a separate memory card reader that will take SD, SDHC and MMC formats, but not xD as some do. There’s also a hardware wireless switch, which is always a good thing.


On the back is a lonely modem jack, while on the right we find Ethernet, another USB port, a 34mm ExpressCard slot and the DVD-writer. Notice the absentees on this list? A lack of e-SATA we could forgive, since it’s a sin Sony shares with Samsung. However, the one thing that’s inexcusably missing from the list is HDMI. Yes, you read that right, this 14.1in notebook costing over £800 has no form of digital video connectivity whatsoever, something that’s offered by notebooks less than half the price! 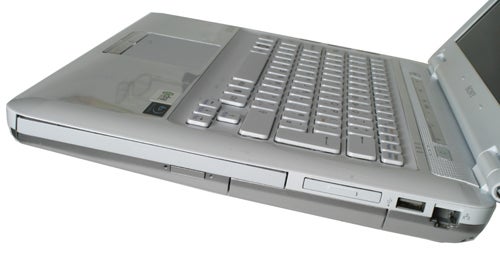 What makes this even more ludicrous is that Sony actually offers a large selection of the CS Series range with integrated Blu-ray drives or the option to upgrade to one for £99. Fabulous idea, chaps, people are really going to see the benefits of 1080p high definition on the notebook’s 14.1in 1,280 x 800 screen! Wait, you want to output digitally to your Full HD 42in television? Well, sorry, you can’t.

Traditionally a strong point of Sony laptops, the screen is yet another element that fails to impress. Vertical viewing angles are poor, making it difficult to find an ideal screen position, and even if you do manage to find the ideal angle, dark tones have a strong greenish-yellow contamination. Good horizontal viewing angles and razor sharp text go some way to improving things, but can’t alter the fact there’s nothing special about this display. 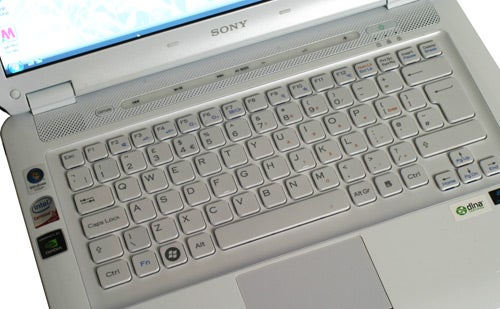 Likewise the speakers are middle of the road, delivering a bit more punch and depth than expected but distorting at high volumes. Combined with the average screen this makes for a deeply mediocre multimedia experience, making the Blu-ray options even more frivolous.


Another disappointment is the keyboard, proving to be a prime example of style over substance. It’s the isolated type that’s become synonymous with the VAIO name since Sony pioneered it and while this manages to look very nice indeed and the layout is good enough, key travel is so shallow you’ll have to develop a very light touch to get on with it and overall typing feels a bit sticky with little positive feedback. 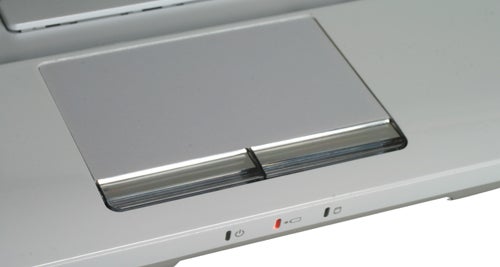 Given all these complaints, one thing this machine does have is a very good touchpad. Its finish strikes the perfect balance between smooth and textured, while its size and positioning make it large enough to be practical without obstructing typing. This positive experience is further enhanced by its two faux-chromed buttons that are also large, responsive and easy to use.

In use the CS11 is no speed demon, but it will handle most tasks with ease. An nVidia GeForce 9300M GS graphics chip won’t let you play Call of Duty 4, but does deliver a 32.1 frames per second average in TrackMania Nations Forever at medium detail.


An Intel Core 2 Duo P8400 heads the rest of the cast, running at 2.26GHz on a 1,066Mhz front side bus. This is backed by 4GB of 800MHz DDR2 RAM, which is more than the included 32-bit version of Windows Vista Home Premium knows what to do with, while a generous 320GB of hard drive space is plenty for most users. Wireless duties are also nicely covered by Bluetooth 2.0 and Draft-N Wi-Fi, while the obligatory 1.3 Megapixel camera takes care of video chatting.

On the software side, there’s a bit of bloatware like Google Desktop, but there are also some useful things like Adobe Photoshop Elements 6, Microsoft Works 9, Easy Media Creator, Adobe Reader 8.1 and DivX Player.


One other area, aside from the touchpad, where CS11 is rather strong is in battery life. Despite using only a 4,400mAh six-cell battery, this notebook managed a heartening three hours and 43 minutes in the semi-intensive Productivity benchmark, though this is with all wireless radios turned off. Another advantage the Sony has here is that in a well-lit environment its screen remains legible even at fairly low brightness settings, meaning you could get over four hours of frugal use when on the move. Just keep in mind that at around 2.5kg, this notebook is no lightweight.


When it comes down to it though, there simply aren’t enough reasons to recommend the CS11. Something like the 15.4in Medion Akoya S5610 will give you a very similar working experience and far superior connectivity for £300 less, while likes of Acer, Dell, HP, Samsung or Toshiba offer machines with plenty of style and similar specifications, but with better build quality and features for less money. 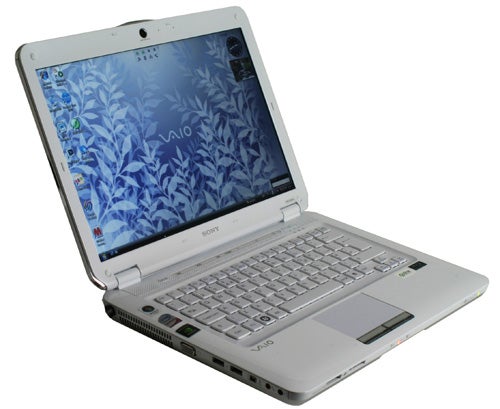 Buying direct from Sony is even worse, since you end up paying nearly £900 for the configuration in this review, or just shy of £1,000 for the pointless Blu-ray version. For this kind of money, a current version of the Dell Studio 15 will get you everything the Sony offers plus a faster CPU, more choice of colours and designs, a Full HD 1,920 x 1,200 15.4in display to enjoy those Blu-rays on and a larger 9-cell battery.


Sony has really hurt the VAIO name with its VGN-CS11S/W. Shockingly poor build quality is just one among a whole raft of other issues and given its high price you’re better off looking elsewhere.