Sony has always had a knack for designing good looking notebooks and, whether it’s an ultra-portable or a desktop replacement, it delivers on a regular basis. The C-series of VAIO notebooks is another example of Sony’s good design ethic, and today we’re looking at the VGN-C2SL; an update to the C-series that is available in five different colours. 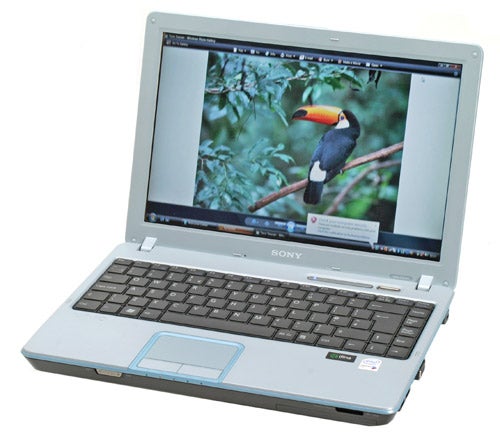 Our test sample came in an attractive sky blue – or “Rediscovery” blue as Sony likes it to be known – with the four other finishes being “Karma” white, “Natura” green, “Free Spirit” pink and “Timeless” black. Sony is certainly pushing the individuality angle here, with each colour intended to appeal to those who want to make a statement with their notebook. Many suggest colour preference is an indicator of personality, and even if you don’t believe this it’s still nice to have a choice.


For what it’s worth the C-series certainly achieves its basic goal: being distinctive. We’ve got quite a number of notebooks in the office at the moment, and when sat next to others the C2SL certainly cuts a striking figure. The combination of the coloured outer casing and the shiny silver VAIO logo are immediately inviting; making it a great notebook for wowing friends. Dare I say the wow starts now? 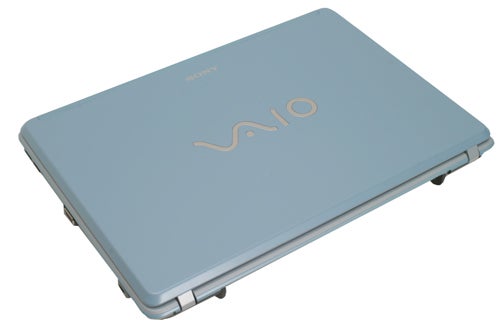 As hinted at earlier this is an update to the C-series range – though the changes are in fact relatively minor with a small increase in hard disk capacity and a small upgrade of Intel’s integrated graphics chip being the only notable hardware changes.


The upgraded graphics are a result of the installation of Windows Vista, with more power required to run the Aero interface effects that help Vista look considerably more polished when compared to XP. Otherwise everything is very much the same, and for the price the C2SL is reasonably well specified.


At the centre of it all is a Core 2 Duo T5500 running at 1.66GHz, and this is supported by 1GB of DDR2 system memory and integrated Intel 945GM Express graphics with 64MB onboard memory. 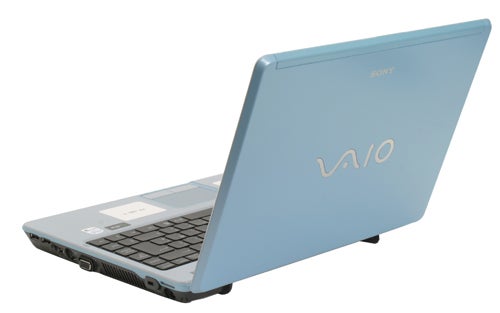 The onboard graphics memory is supplemented by sharing system memory, with a potential 224MB available for graphics processing. In a normal desktop environment graphics memory usage is in the region of 76MB, with a small amount of memory automatically shared for its operation.


Sony does also produce a slightly more powerful, and more expensive, version of the C-series that features an nVidia Go 7400 which will provide a little bit of gaming performance should you really want it.

Naturally the C2SL also comes with a DVD Rewriter drive, while the 120GB SATA Hard Disk is very much as expected too. Sony also includes an ExpressCard memory card adapter adding support for xD, SD and MMC memory cards along with Sony’s own Memory Stick and Memory Stick Pro formats.


On the left, starting from the top is an Ethernet port, modem port, microphone in, headphone socket, optical drive and the ExpressCard slot which is situated above the optical dive. On the front edge is a Wireless on/off switch and a Magic Gate memory slot for Sony branded memory cards.


Overall this is a nice selection of connections, though one or two extra USB ports would have been a nice addition. The inclusion of S-Video is, however, a significant bonus making connecting your notebook to a TV a quick and easy process.


The C2SL has you well covered for communication methods too, with a standard 56K modem, 10/100 Ethernet, 802.11a/b/g and Bluetooth 2.0 EDR all built in. All in all, it ticks most of the boxes for features you’d expect to find on any notebook these days. 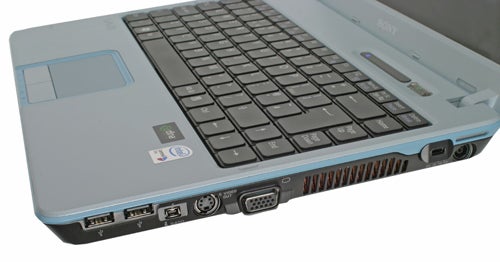 The display is also perfectly serviceable, with a 13.3 inch viewable area and a native resolution of 1,280 x 800 that is very much the norm for a notebook of this size. It also has the now ubiquitous glossy finish that helps produce excellent blacks and vibrant colours for great DVD performance – though viewing angles do suffer accordingly.


Overall the weight and dimensions put the C2SL somewhere between an ultra-portable and a desktop replacement, making it eminently portable. It weighs in the region of 2.3kg and, though it isn’t as svelte as some of Sony’s more expensive offerings, the colourful styling helps make it look rather more attractive than a typical mid-range offering.

The larger form factor also provides plenty of space for a large, well laid out keyboard. The Insert, Delete, Home, End and Page Up/Down keys are all arranged vertically down the right hand side and apart from this and the lack of a number pad, the layout is just like any normal desktop keyboard.


If anything the keyboard is a little on the large side compared to other notebooks, and at times it feels like you’re stretching for the keys. Whether this is a problem is very much a matter of taste, while those more used to desktop keyboards may well appreciate the larger keys. Below the keyboard is a wide aspect touchpad, which is generally fine though the default speed settings seemed to be a little unresponsive. 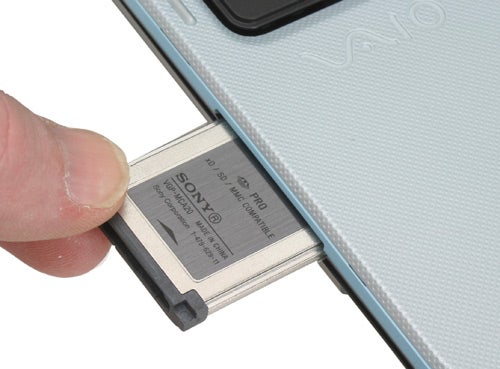 For our testing we had to make a few changes to our normal procedures due to Windows Vista and the compatibility issues that new operating systems inevitably create. Currently MobileMark 2005, which we use to test battery performance, doesn’t work on Vista. The same applies to SYSmark 2002, though PC Mark 2005 does work and we were also able to run our in-house 2D tests for real world testing. 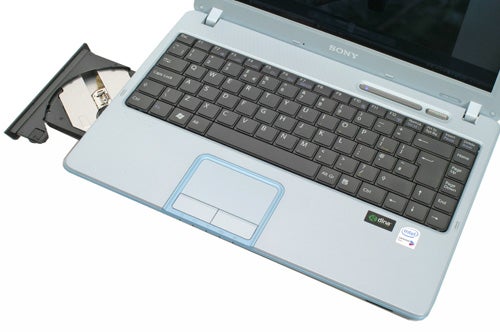 With PC Mark we’ve compared the C2SL to the cheap but impressive Lenovo 3000 N100 and Samsung’s Q35 Red Core 2 Duo, which is slightly smaller but similarly specified and priced.


As one might expect, the C2SL sat somewhere in the middle in most of the tests – though it did lag a little behind in the graphics tests where its integrated graphics struggled. As previously noted, however, Sony does provide an nVidia powered solution if this is a concern. 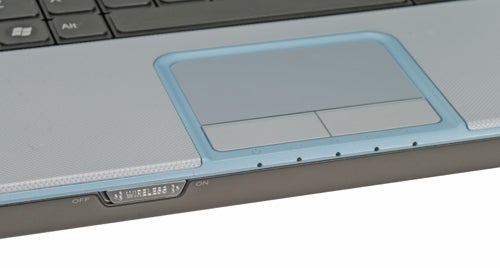 Overall though the C2SL performed admirably and at times came very close to equalling the Q35. The only real concern is whether 1GB RAM, which is considered the bare minimum for Vista, is really enough for reliable performance over a long period of time? Moreover, the memory is configured as two 512MB sticks, meaning you’ll need to purchase two new sets of memory to upgrade the system. That said, the two 512MB modules will operate in dual channel mode and give slightly better performance.


If Vista doesn’t appeal to you just yet then older Windows XP powered C-series notebooks, which share almost identical configurations, are still available. However, Vista is definitely a step forward from XP, and we would recommend that anyone buying new hardware go for a Vista install as part of the package. 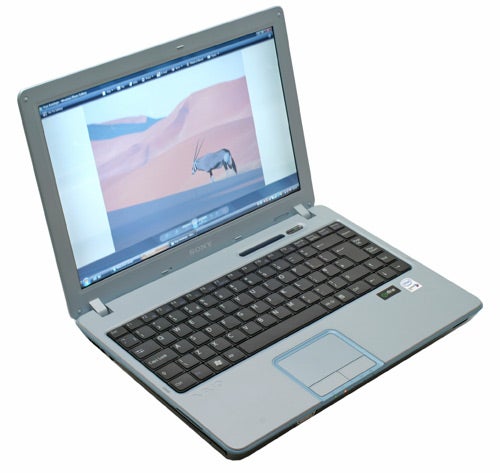 
Colourful finish excepted, the VGN-C2SL is a solid, if unspectacular notebook that one can’t fault greatly. It performs well enough, features everything you really want from a notebook and it’s typically well built and attractive to look at, making it a great alternative to a MacBook.


If there’s one fly in the ointment, it’s that the Samsung Q35 is available for roughly the same price. This makes it hard to recommend the Vaio C-series unless you’re looking specifically for something with a more personal touch.