Despite the push towards Media Center PCs, Sony decided early on that it wasn’t going to jump onto the Microsoft bandwagon. Instead Sony developed its own media PC software to piggy back a standard installation of Windows XP. Now, I’ve seen many attempts at circumventing Windows XP Media Center Edition, with varying results, but without a doubt, the best proprietary media PC solution is Sony’s.


I first encountered one of Sony’s media PCs over a year ago when I reviewed the PCV-V1/V. This was an all-in-one media PC with a 15in high-contrast glossy screen. The one downside of the earlier model was that the screen had a 4:3 aspect ratio, but Sony has addressed this issue and this latest model – the VGC-V3M – now sports a 17in widescreen display, making it far more suitable for watching movies and TV. 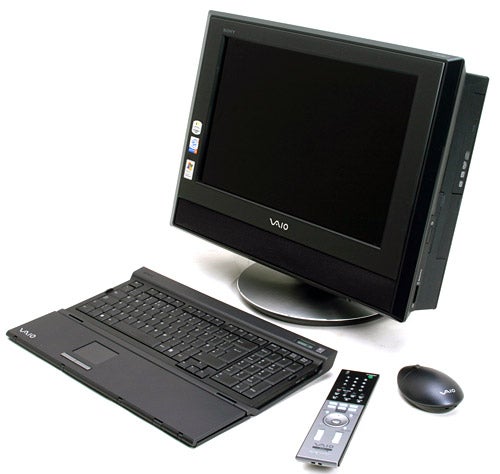 The screen is probably the highlight of this machine. The X-Black coating makes the colours so vivid that they almost jump out at you. This is ideal for watching video, where the image produced looks bright and life like. Another step forward is the native resolution – whereas the old model could only manage 1,024 x 768, this new machine provides a display area of 1,280 x 768. Although I usually look for a slim bezel surrounding a TFT screen, the glossy black surround that Sony has opted for sets the display off perfectly, and makes the image look even more vibrant.


Below the screen is the obligatory VAIO logo nestling above a cloth covered speaker enclosure. The speakers are surprisingly good considering their size and a decent stereo sound stage can be achieved when sitting in front of the machine. One nice touch that I noticed was the directional menu sounds – when you click left on the remote the corresponding beep comes from the left and when you click right the beep comes from the right. 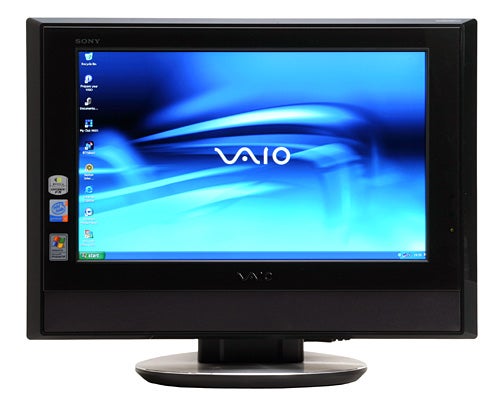 On the whole the VAIO VGC-V3M looks very sleek and stylish – just the way you would expect a Sony PC to look. Unfortunately, to the left of the screen are stickers for nVidia, Intel and Microsoft which totally ruin the minimalist black effect. Now I know that PC manufacturers are obliged to promote their hardware partners, but with a device like this, covering it with stickers really does defeat the purpose. My advice would be to careful peel them off and then polish the surface to get rid of any errant glue – believe me, the effect will be worth the effort.


Of course the VGC-V3M isn’t just a great looking screen, although you could be forgiven for thinking that it is. Like the previous model, the entire PC is built into the screen housing, so you have no unsightly box sitting under your desk taking up space. OK, so the casing is quite thick, considerably more substantial than a current generation iMac, but then this machine does offer greater functionality. 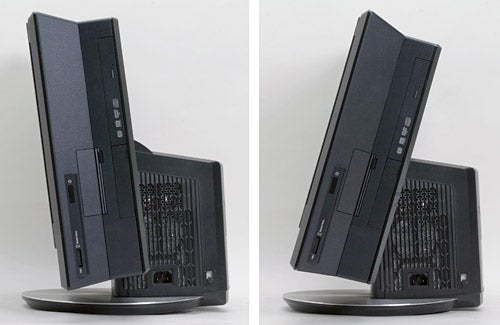 It’s clear that Sony has leveraged its expertise in notebook building to create this machine. This fact is highlighted by the inclusion of an nVidia GeForce FX GO5700 graphics chipset. This is a notebook graphics chipset, so Sony has probably built this machine around a notebook motherboard. Adding more weight to this theory is the inclusion of a PC Card slot – something that is particularly useful, especially since this particular model doesn’t sport integrated WiFi. The larger 20in model does include integrated WiFi, so it’s a bit of a shame that this machine needs a separate wireless adapter.

The limited performance of the graphics chipset means that you won’t be playing any recent games, but the rest of the hardware spec is very respectable. Driving the VAIO is an Intel Pentium 4 CPU clocked at 3.2GHz, supported by 512MB of memory. There’s plenty of storage on offer with a 250GB hard disk spinning at 7,200rpm. Of course if you want to offload data from the PC you can make use of the integrated DVD writer. This will burn DVD+/-R media at 8x, DVD+/-RW media at 4x and DVD+R DL discs at 2.4x. The optical drive is a notebook model, once again hinting at the notebook basis of the machine.


Being a media PC there’s also an integrated TV tuner. The tuner proved to be pretty good quality and even managed to grab a picture in the notoriously bad reception area of the TrustedReviews office. That said, it’s a little disappointing that it’s only an analogue tuner rather than a digital one. 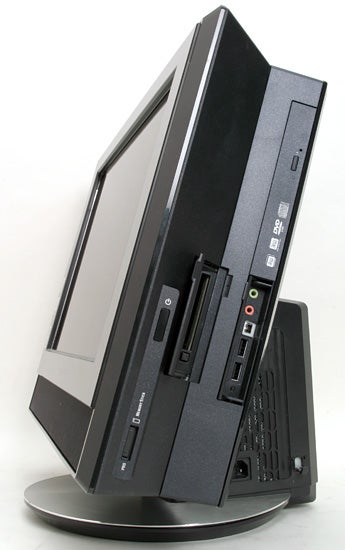 The VAIO VGC-V3M is stacked full of connectivity options. On the right hand side you’ll find a MemoryStick slot, along with a flap hiding the PC Card slot. There’s another flap hiding two USB 2.0 ports, a four-pin FireWire port, headphone and mic sockets and the connect button for the wireless keyboard and mouse. You’ll also find the DVD writer mounted here.


All the rest of the connection options are on the bottom of the chassis. This is good in as much as it keeps the cables out of the way and the whole chassis looking neat. Unfortunately the cowling covering the rear of the machine makes it very difficult to access the ports. Even plugging the TV aerial in was a chore that involved me laying the whole machine on its back. However, after further investigation I realised that Sony’s design ethos had won through once more – I found that the whole rear cowling could slide upwards, making it simple to reach the ports, I just wish I’d discovered this before struggling to insert the aerial cable. 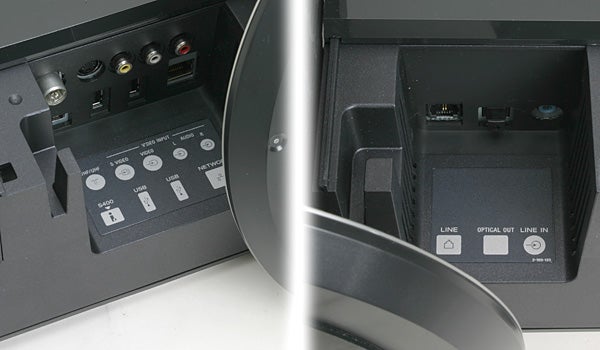 There are two groups of ports on offer at the base of the machine – on the right hand side there’s the aerial socket, S-Video in, composite video in, analogue audio in, two USB 2.0 ports, a four pin FireWire port and an Ethernet port. On the left is a line-in port, an optical digital input and a modem socket. 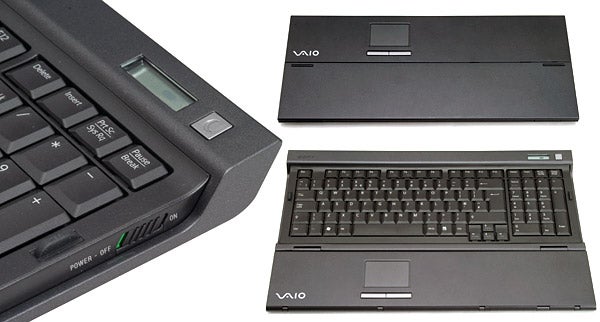 Complementing the main system is a wireless keyboard complete with integrated touchpad. The keyboard does have a rather flat feel to it, much like a notebook. That said, there’s a decent amount of travel in the keys and the break is also solid. I managed to achieve a reasonably fast typing rate off the bat, while having the touchpad on hand is pretty handy if you’re short on desk space. When not in use the keyboard can be covered over, and when in use, the cover folds in half to create a wrist rest. If you’re not happy with using a touchpad, Sony also throws in a wireless optical mouse – it’s shaped like an egg and takes a little getting used to, but it’s not the worst rodent I’ve ever used by any means. You can also turn the touchpad off if you’re worried about tapping it by mistake.

The final piece of the puzzle is the remote control, after all, any media PC needs a remote control. From the remote you can launch the Sony media environment. Like Media Center this gives you simple access to live TV, recorded TV, stored video, music, DVD playback and image viewing. It all works very well and doesn’t feel any less intuitive than Media Center. The remote is finished in matt silver and black and complements the system perfectly. There are shortcut buttons for Live TV, Recorded TV, Music, Pictures and CD/DVD, while the four way control with centre mounted Enter button makes navigation a breeze. 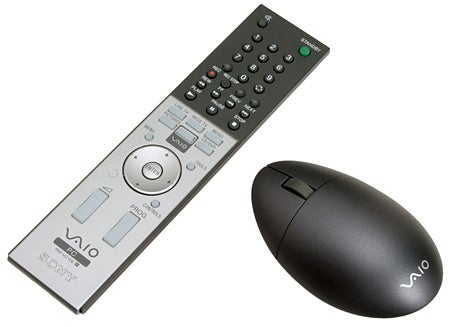 As always, Sony has thrown a huge bundle of software onto the machine. There’s the usual Sony stuff like SonicStage, SonicStage Mastering Studio and PictureGear Studio, while the Adobe Companion Pack is always good to see – there’s Photoshop Elements, Premier Standard, Acrobat Elements and Photoshop Album. There’s also Norton Internet Security (with three months of updates), Norton Password Manager and WinDVD. Finally you get a copy of Microsoft Works, which will get you working straight out of the box. Strangely my review sample had Microsoft Office installed, but it would appear that this is not part of the regular bundle.


Price wise, the VGC-V3m will set you back £1,352.54 including VAT, which isn’t bad considering the amount of kit that’s squeezed into this stylish little box. But even so, I do have one or two issues with this machine. First is the lack of a digital TV tuner is a real disappointment – a cutting edge system like this really should be throwing DVB-T into the equation. Also it would have been good to have seen two tuners, giving you the option of watching one channel while you record another. Finally, I think that integrated WiFi should be a prerequisite for a machine like this, despite the easy upgrade path that the PC Card slot offers. 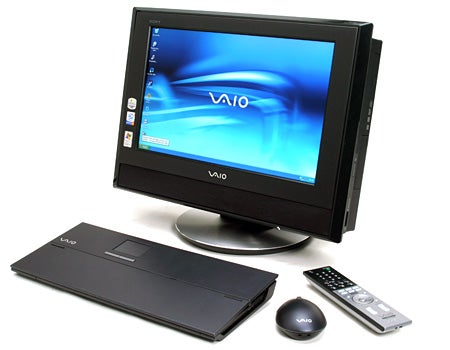 On the whole though, this is a nice little media PC and probably one of the best looking solutions out there. If you’re living in a small studio flat, in college digs or even just want an all-in-one solution for your home office, the VAIO VGC-V3M is worth a look.


Sony has built a sleek all-in-one media PC that wouldn’t look out of place in even the most stylish of homes. Unfortunately there are a few small issues that stop the VAIO VGC-V3M from being a must have machine, with the lack of digital TV tuner and integrated WiFi being the worst culprits. However, if you can live without those features and need to have your entertainment centre and PC all in one good looking box, the VGC-V3M should fit the bill.