Over the past year or so we’ve looked at a fair number of media PCs at TR, enough to show that the there is some belief in the concept; if not quite the huge take-up that some in the industry had hoped for. Most of these systems have been based on Microsoft’s Windows XP Media Center Edition 2005, but it’s dissapointing that Dell, the world’s largest PC company, still doesn’t offer any MCE 2005 systems at all.


Not surprisingly, Sony, a brand virtually synonymous with AV, offers media PCs, but it also doesn’t use MCE 2005. But then, if there’s one company that likes to furrow its own path it’s Sony. Unlike the all-in-one media PC Sony system we looked at here, this is a tower system that ships without a monitor, but if you want one included, Sony will no doubt be happy to sell you one.


The system is more than a just a regular PC though – it’s a home server system. The PC is designed to act as a central store point for media, either downloaded from the Internet, or captured over the air via its integrated TV tuner. The RA304 bundle includes a Network Media Receiver, a box that connects directly to a TV via composite, S-Video or component (which gives a far better picture). Content can them be streamed to the box via wireless or wired Ethernet. If your set up at home isn’t yet wireless, Sony has bundled a rather snazzy looking wireless access point. This home server approach isn’t new for Sony though. We looked at a predecessor of this machine a year and a half ago, here. 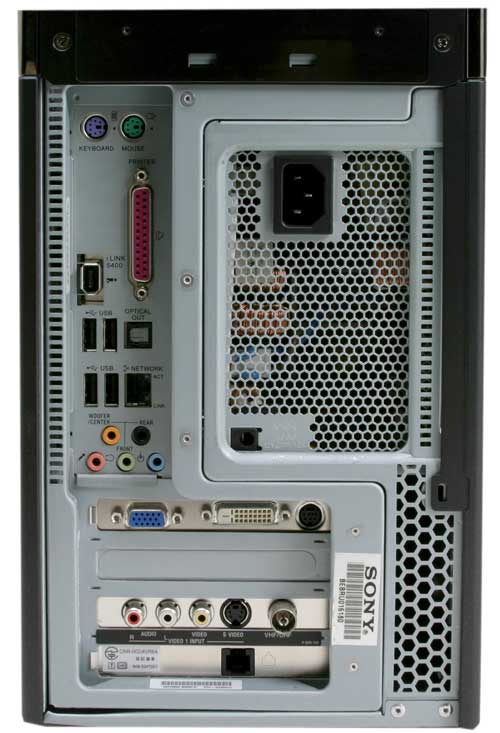 One thing that Sony machines normally boast is style and this one has it in spades. It’s a cool black block, set-off by a silver strip with the Vaio logo at the left that sits beneath the two optical drive bays. Each section of the front fascia is covered by a flap bringing a smooth understated look that oozes sophistication. In other words it’s cool, but not in a crass shouty kind of way. The really neat thing though is when you look at the system side-on. Yes, it has a hole in it and yes it’s intentional. Sony has designed a heat-pipe system that draws air from the centre of the machine before emitting it at the rear towards the top. Press the button in the middle of the system on the left and the side flap pulls down, revealing that the power supply is located in the middle of the machine rather than at the top. Whether this system is preferable to more conventional methods is debatable but there’s no denying that the system is quiet.

Beneath the aforementioned silver strip is a flap that slides down to reveal a floppy drive bay for the old schoolers out there. Beneath this are memory card slots for Compact Flash, SD, XD, of course, Sony’s own Memory Stick. At the bottom, a flap comes down to reveal a PC card slot, which is unusual for a desktop machine. Beneath this are composite and S-Video inputs a headphone and microphone socket, a 400Mbps iLink (aka FireWire) slot and three USB 2.0 ports. If you want to use a wireless card and close the flap at the front you’ll need to source one of Sony’s own brand offerings that features a foldable aerial – the Netgear one we used during testing meant we couldn’t’t close the flap, which would just “ruin the décor, don’t you know“. 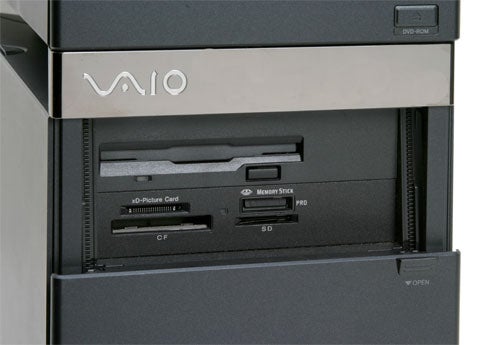 The motherboard is based on Intel’s Granstdale 915 chipset and runs an Intel Pentium 4 560, with 3.6GHz of processing goodness. This is very capable but in such a multi-tasking media centred machine such as this I would have preferred to see a dual-core Pentium D, but that’s still relatively new technology and it tends to take a behemoth like Sony a while to respond to such things. One would imagine it will appear in next year’s model.


There’s 1GHz of RAM on two slots with two more available for upgrading. There’s also two hard disks of 250GB each, which are set-up in a RAID 0 configuration for increased performance. This is split into a C drive of 27.9Gb formatted, just for Windows, and a D partition that appears as a huge 432GB of formatted capacity for all your content and applications. Nice. 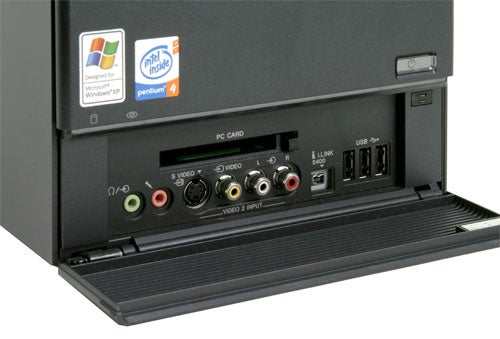 Graphics are handled by an nVidia GeForce 6600. This is powerful enough for recent games but not for running them at high resolutions or for image quality enhancing filtering modes enabled. It sports a VGA and a DVI connections and a TV Out. At the rear there are also two USB 2.0 slots, an iLink (FireWire) port and a 100Mbps Ethernet port. Audio is provided by a High Definition codec with support for 5.1 analogue output or you can send a digital stream out via the optical out.


The TV Tuner card sports inputs for composite or S-Video and has two phone audio inputs. Unfortunately, it’s only an analogue tuner. Yes, it seems Sony still hasn’t heard of digital TV. Still, one wouldn’t expect the one of the world’s leading display companies to keep up with all the latest new fangled technology, would you.

So it’s all very competent inside the case. Outside Sony keeps things suitably stylish with a wireless keyboard and mouse. The keyboard is particularly interesting. It features a folding wrist rest that also contains a laptop style touchpad complete with mouse buttons, so you can move the mouse pointer round the screen from a distance. This can be turned off if desired with a switch located underneath the pad. The wrist rest can also be used to cover over the keyboard for neat storage and you can still use the touch pad at the same time. Finally, there’s a button for placing the machine into standby, going totally silent when it does so. The same button also speedily wakes the machine up. The typing action felt a little strange at first, with a hard feel and not enough travel in the keys. Also, occasionally, the keys wouldn’t respond for a few seconds even though the battery indicator was at full. The mouse is rather an odd shape, but echoes that unique Sony design philosophy. It’s comfortable enough though.


In typical Sony fashion the system is swamped with free software. Microsoft Works is included, but not Office, but there are several quality Adobe photo applications. Norton Security Centre is installed, which includes both Firewall and Anti-Virus appplications. Personally I find the former to be irritatingly intrusive. 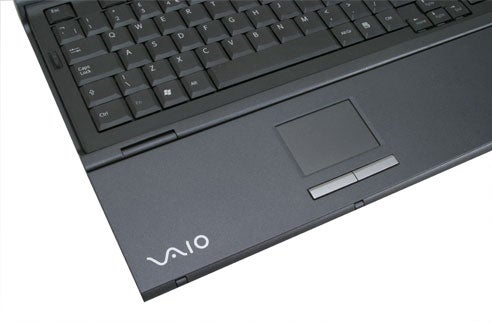 There’s also a plethora of Sony Vaio software installed and this can all be updated by going to a Vaio update web site – like a little Sony version of Microsoft’s Web Update. It‘s a reassuring feature, though some of the updates were almost 100MB is size and others once downloaded have to be installed manually.


The most important application though is Vaio Zone, which is essentially the Sony version of Microsoft’s Media Center interface. It looks very Sony and to be honest, based on my experience with Sony’s SonicStage I was expecting it to be god-awful. In facts, it’s rather good. It has an easy to use interface that’s controllable via the well constructed remote control with smooth transitions accompanied by sounds that match the side you’re navigating too. Music, video and pictures are all handled consummately and it was a genuine pleasure to use. 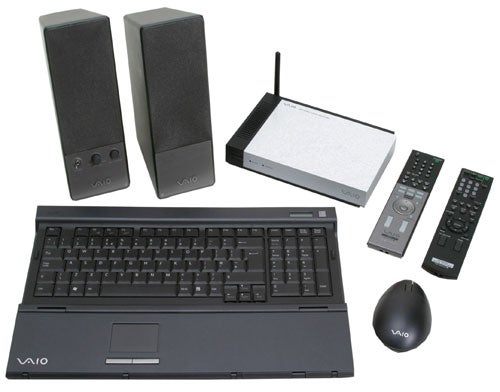 Aside from the unique look of the system, the PCWA-A320 (catchy, huh) wireless access point and the VGP-MR100E (again catchy), Network Media Receiver are the unique features of the system. When I first unboxed the system I was a bit taken aback all the various bits and how they all should connect up and I’m used to such things. For the style conscious, but non-technical consumer I envision going for this machine, I would imagine it would all get left in the box until they got someone to set it up for them.

Even once I’d hooked it all up I ran into problems. I could get the Receiver to see the PC over a wired connection but not wireless. As it turned out, the reason was because I had altered the default setting for content from streaming Standard MPEG2 to High Quality MPEG2. When you do this the software states that there could be a problem with streaming smoothly but it doesn’t tell you that by setting it to high quality makes connection over wireless impossible. 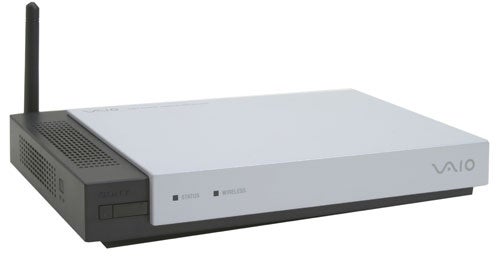 The fundamental problem is that the Network Media Receiver can only understand an MPEG2 stream. It converted some simple low bit-rate AVIs but I had no luck with DivX or Xvid files. If you’re content just to stream video content you’ve recorded from the TV tuner or MP3’s you’ll be fine, but otherwise but if you wish to stream DivX files downloaded from the Internet or more legally those encoded yourself then the Network Receiver won’t be much use to you. In addition the interface isn’t too hot. Microsoft’s Xbox 360 is being touted for its ability to act as a MCE 2005 extender with the same rich interface of an MCE 2005 system. On the Sony Network Media Receiver, the interface is pretty dull and basic while the remote control proved to be slow and unresponsive. 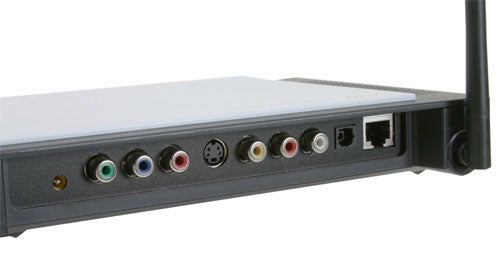 
Overall then, the Sony Vaio VGC-RA304 is complex to set-up and frustratingly limited in scope. With the home media center concept, Sony certainly has the right idea but the execution needs to be better for it to really work. The PC looks fantastic and is nicely designed, but it’s not enough to make the RA304 an attractive solution, especially at the asking price.