We’ve had a bit of a love/hate relationship with Sony’s VAIO laptops over the years, really liking the high-end Sony VAIO Z Series, while cheaper efforts such as the VGN-NS30E/S left us completely unimpressed. Coming in at well over £1,000, we’re hoping the company’s new F12 falls into the former category.

Just like the Z-series, the F12 packs a boatload of impressive specifications, but rather than cramming them into as small a chassis as possible, this 16.4in laptop – measuring 263 x 41 x 387mm and weighing 3.1kg – sits firmly in the desktop replacement category. Gamers aside, it has plenty of power to be most consumers’ primary machine. At its heart is an impressive 1.73GHz 740QM Intel Core i7 quad-core CPU which turbo-clocks to 2.93GHz. This is backed by 4GB of DDR3 RAM, which is as much as most users will need and plenty for the supplied 64-bit Windows 7 Premium to be happy with.


For storage there’s a generous 500GB hard drive that spins at a speedy 7,200rpm, while optical duties are handled by a Blu-ray drive. Combined with the screen’s 1,920 x 1,080 resolution and an Nvidia GeForce GT 330M graphics card, this makes for a very capable multimedia machine that should also have a modicum of gaming ability. 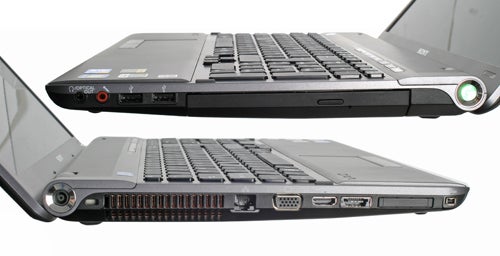 Connectivity is also well up to speed. For wireless duties we have Wi-Fi N and Bluetooth 2.1, with the always-appreciated addition of a physical wireless switch. There are three USB 2.0 ports, one of which doubles as an eSATA connector. Then there’s a four-pin mini FireWire port, which is becoming quite the rarity these days.


Other data ports, including USB 3.0, can be added through the laptop’s 34mm ExpressCard slot, while two separate memory card readers take Sony’s proprietary MS Pro and the more common SD/MMC card formats. Finally for video we have HDMI and analogue VGA, while audio is handled by 3.5mm headphone and microphone jacks, the former of which doubles as an optical digital output. 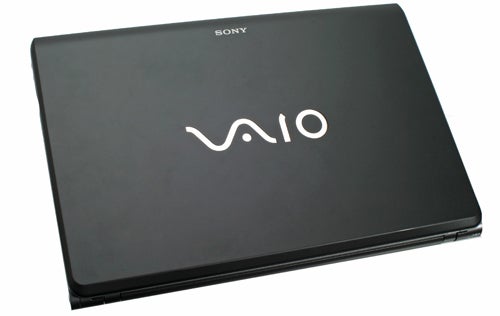 When it comes to design, as usual Sony offers something a little different from the norm. For one, we’re glad to find that the F12’s lid features a semi-matt finish that’s far more resistant to fingerprints than the glossy alternatives found on many competitors, though it can’t hold a candle to the brushed metal finish of the Acer Aspire Ethos 8943G, which in its cheaper configuration costs around the same as this Sony.


Inside, the look is almost identical to that of the Y-Series – albeit gunmetal instead of silver – but, if it ain’t broke… The screen’s bezel and keyboard-surround feature the same smooth semi-matt finish as the lid, while the palm rests have a micro-tile textured pattern that prevents sweaty hands from slipping and does a good job disguising grease-marks. Sony’s signature green-backlit power button is also present.

Build quality on this F12 is surprisingly average for a high-end VAIO. Though most of the chassis feels quite solid there is a little too much creak for comfort in the plastics, and it suffers from the same problem as the Acer Aspire 5745G, where pushing centrally on the base of the lid results in the bezel separating from the screen – something that most laptops do to an extent, but not as noticeably as here. 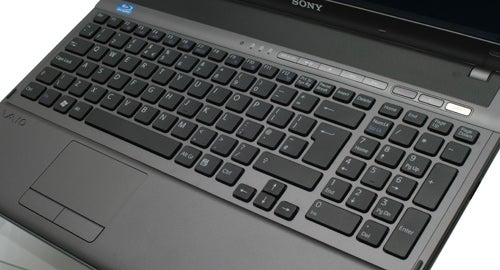 Inevitably – considering Sony helped to popularize it – the F12’s keyboard is isolation-style, also known as chiclet. Feedback is excellent with more travel than we’re used to finding in this type, but we do have a list of annoyances. First of all, while basic layout is good with large Enter and right-shift keys and a full number pad, the positioning of the secondary functions isn’t as intuitive as with most competitors. Keys also feel slightly too spaced out, making typing a less comfortable experience than you would expect given the F12’s size. Finally, despite being well-positioned, the touchpad occasionally moves the cursor accidentally due to movement of your palms.


Ironically the touchpad isn’t the most sensitive we’ve come across, and occasionally we found ourselves needing to tap an icon or button more than once. Aside from this it’s good, with a large, smooth surface and individual buttons that offer a positive click. 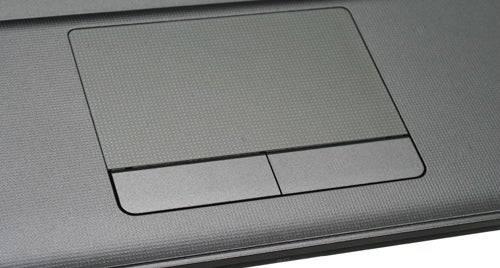 One touch we really do appreciate is the set of dedicated physical multimedia controls above the keyboard. As well as track controls there’s a button for turning the screen off that’s hardware-based rather than software dependant (always handy on a laptop), an S1 button that can be user-assigned and a VAIO button that launches a media browser, while an ‘Assist’ button accesses VAIO Care, providing help and tips in case of problems.


On a laptop primarily geared towards entertainment, its screen is an important factor, and – glossy finish aside – on that account we’ve few complaints with the F12’s 16.4in example. As already mentioned it sports a Full HD resolution which gives you plenty of desktop space and is ideal for Blu-ray films.

It doesn’t hurt that the display’s general performance isn’t too shabby either, with viewing angles that are above average and good dark detailing, though this comes at the expense of detail at the lighter end of the scale. Backlight distribution is also even, there’s no obvious sign of banding, colours are vibrant and sharpness is excellent, thanks in part to the low dot pitch provided by 1,920 x 1,080 on a screen that’s relatively small.


The cinematic screen isn’t put to shame by the speakers, which get surprisingly loud without distorting, while producing a soundstage with clarity and depth. However, they’re held back from matching the superb harman/kardon speakers found on Toshiba laptops such as the Toshiba Satellite A660 by a distinct lack of bass, leaving things sounding too sharp and tinny. 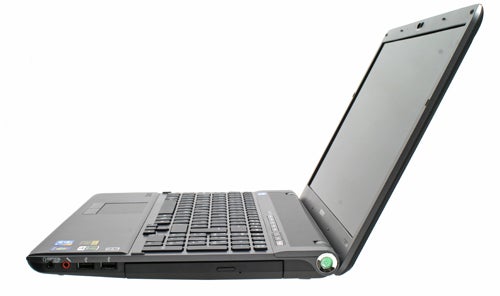 Overall though, the F12 does a reasonably good job of letting you enjoy video and other multimedia. Its only major negative is the amount of noise it produces. Even at idle this is an audible laptop, and once under stress it produces a constant fan noise that can occasionally be distracting. It’s one of the prices of the relatively slim chassis, but we would rather have a bulkier and quieter machine where desktop replacements are concerned.

With a quad-core mobile Core i7 processor onboard, CPU performance is outright impressive and is going to be more than adequate for the foreseeable future.

It’s no surprise to see the Acer Aspire Ethos 8943G edge ahead, as our reviewed configuration came with a whopping 12GB of RAM. If you get the 4GB version priced closer to Sony’s £1,150 F12, however, you can expect identical performance.


When it comes to games, the Nvidia GT 330M can’t be called a ‘real’ gaming card despite its generous 1GB of RAM. However, for older and less demanding titles it will do just fine, and managed to get 60fps in TrackMania Nations Forever at the screen’s native 1080p resolution. Even Stalker: Call of Pripyat proved playable when we knocked the resolution down to 720p.

Last but not least we have battery life, where the F12’s 5,000mAh/54Wh battery managed two hours and 40 minutes in our semi-intensive Productivity test with wireless disabled and the screen at a very usable 50 percent brightness. While this is certainly decent compared to most laptops with above-16in screen sizes, it doesn’t match up to the Ethos’ extremely impressive near three and a half hours. Though Acer’s laptop needs to power a larger 18.4in display and twin hard drives, it only has a dual core CPU, and thanks to the Sony’s lower 3.1kg weight it’s a tough call to say which machine is more portable (we guess it depends on the condition of your back).

Unfortunately, the F12 fared a lot worse with its screen at full brightness in our DVD test, where it lasted just over an hour and a half – barely enough for many films.


The main question remaining is whether the Sony F12 is worth its £1,150 asking price. Considering that you can usually get a laptop adequate for the average consumer’s needs at the £600 mark, is this machine worth the extra? Actually it’s not bad value for what you get, especially considering the high-resolution screen, Blu-ray drive and powerful CPU. If these are important to you, it’s worth considering.


For £35 extra, a version of the Ethos 8943G gives you a bigger screen, better keyboard, larger (though slower) 640GB hard drive and better build quality aided by a metal finish, not to mention being quieter in operation. However, it’s considerably bulkier and heavier, and neither the speakers nor the screen’s viewing angles are as good. Given the addition of a quad rather than dual-core Core i7, overall we’d say the Sony easily wins.


Sony’s F12 is a capable desktop replacement laptop that offers good value for money, but relatively poor battery life and a few other niggles hold it back from coming recommended. 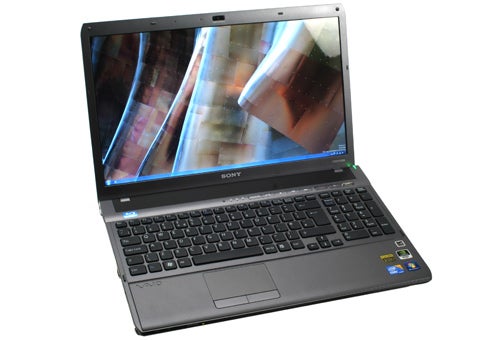 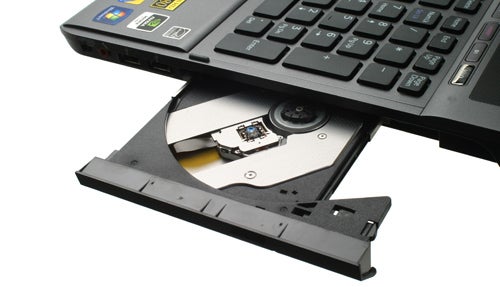