Laptop-tablet hybrids come in several forms. The Sony Vaio Duo 13 is one of the more unusual. It is a laptop whose screen slides along a hinge, letting it rest on top the keyboard, turning the thing into a lounge-bound 13-inch tablet

Exact spec configurations aren’t yet available, but expect high-end Haswell CPUs and SSD storage. And although UK prices are not public, you can expect to pay over £1,000 for an entry-level model. 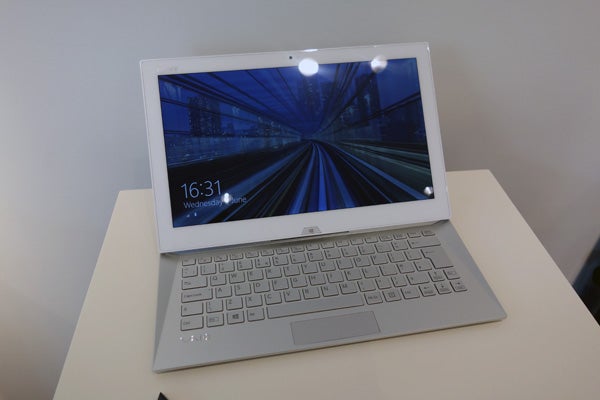 Last year, Sony released the Vaio Duo 11. It was a neat sliding laptop, but this 2013 edition makes a bunch of design improvements and spec upgrades that – if Sony’s lucky – may turn it from a curiosity into something that’ll attract mainstream buyers.

Crucially, it looks and feels a lot better. The keyboard is much closer to that of a ‘normal’ laptop, its trackpad is now merely tiny rather than infinitesimally small and its hinge has been re-designed. 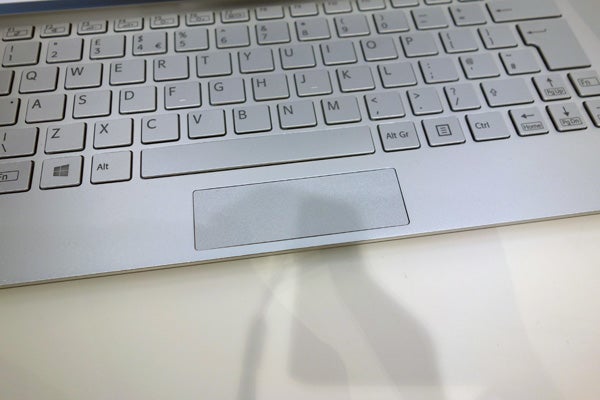 That the Vaio Duo 11’s hinge felt a little wonky was probably that model’s biggest complaint. Sony insists it was more than strong enough, but the level of give to the hinge and that its workings were all too clear to see made it appear like a work-in-progress design.

The Sony Vaio Duo 13’s hinge is smaller, and its two connector plates are much closer together, more-or-less hiding its ‘ligaments’ from view. 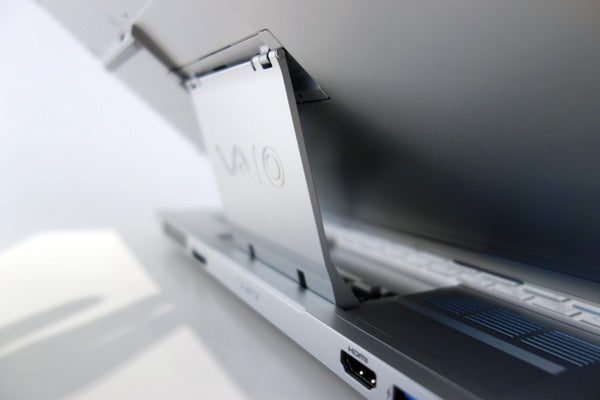 To look at, and in use, the Vaio Duo 13 is a much more cohesive product than its predecessor. Rather than a mis-mash of ideas, this comes across as a ‘Vaio’ product, a title that comes with no small degree of class. 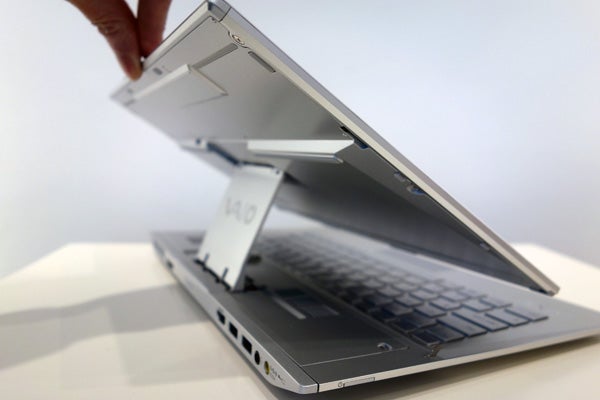 As part of this attention to looks, the Sony Vaio Duo 13 keeps all of its connection on its rear. You get a pair of USB 3.0 ports, a full-size HDMI port and SD card slot. There’s no Ethernet port, and Sony has dropped the VGA video output that featured in the Duo 11. 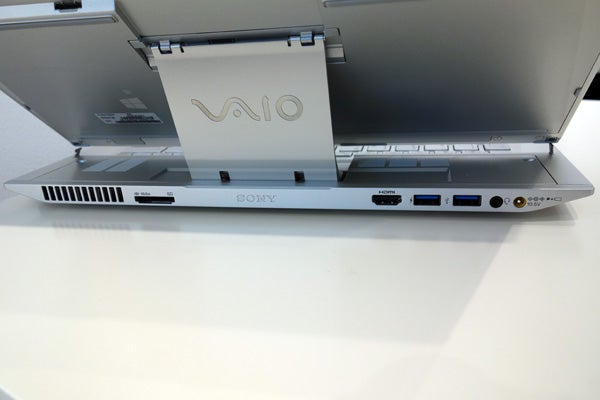 Some people may undoubtedly miss these, but relative to its screen size, the Sony Vaio Duo 13 is much more compact than its predecessor. According to Sony, it’s just 9 per cent larger, while having a much bigger screen.

The Sony Vaio Duo 13 display is 13.3 inches across, and is Full HD resolution. This brings excellent sharpness and clarity for a laptop screen, and from our time with the Duo, contrast and colour reproduction seemed strong. 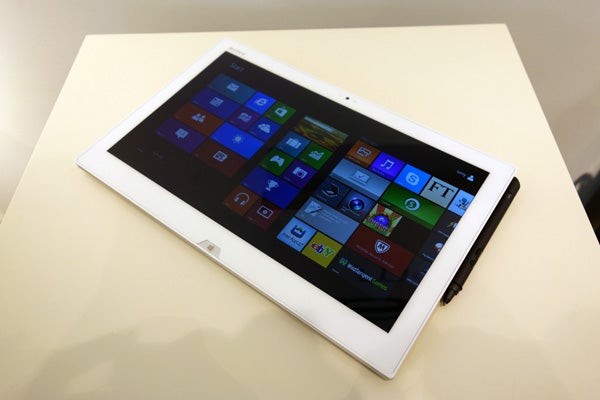 It is, of course, a touchscreen with a glossy finish. Therefore the Vaio Duo 13 is reflective – not so handy for outdoors use – but otherwise image quality is great.

The Sony Vaio Duo 13 doesn’t just have a capacitive touchscreen either. It also has a digitiser stylus. 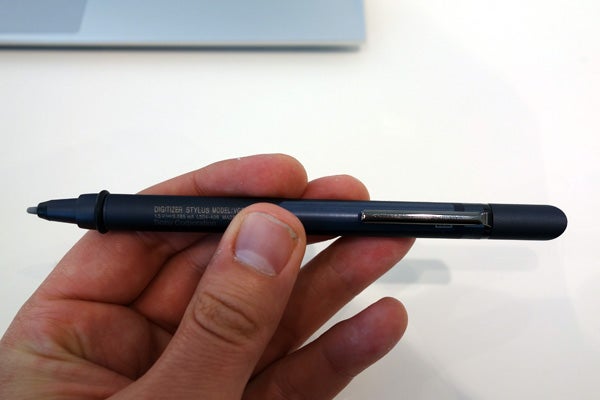 This stylus comes with the laptop, and it slots into an optional plastic holder on the right edge of the Duo 13. There’s also a slide-out inkwell-style stylus holder for when using the device. 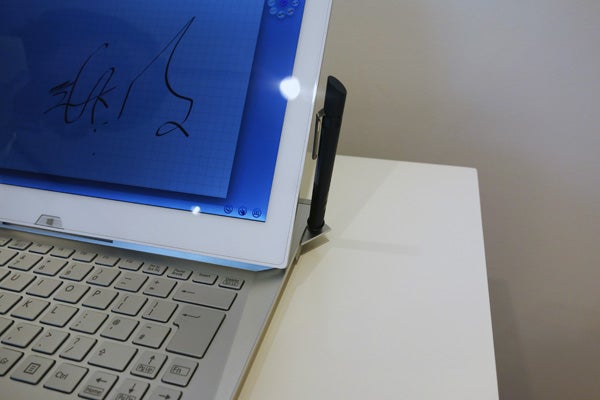 The stylus feels natural and smooth gliding across the screen, however, technologically it’s not particularly impressive. Where the Samsung Galaxy Note 10.1 uses a Wacom digitiser that can sense 1,024 different levels of pressure, the custom digitiser here can only sense 256.

Of course, whether that additional fidelity means anything is down to whether it’s exploited by software. Graphic designers may care about varying pressure sensitivity levels, but we can’t imagine many graphics pros opting for a Sony Vaio Duo 13 over something like a Wacom Cintiq 13HD. This is much more an accessible, lifestyle product.

The inclusion of a digitiser stylus does significantly up the Vaio Duo 13’s flexibility, though, as does the 3G slot in the rear. The SIM slot sits on the back of the screen part of the Duo, carefully nestling into the keyboard indent when the hinge is closed. 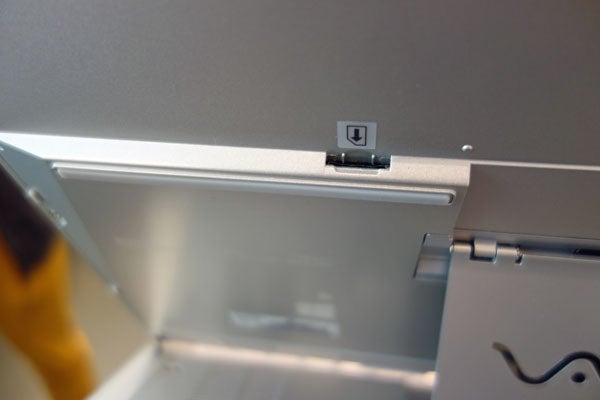 Some other extras do feel a little like features overload, though. There’s an 8-megapixel autofocus rear sensor, which we can’t imagine many people using given the Duo 13 is a shade over 1.3kg, and an NFC panel on the rear. 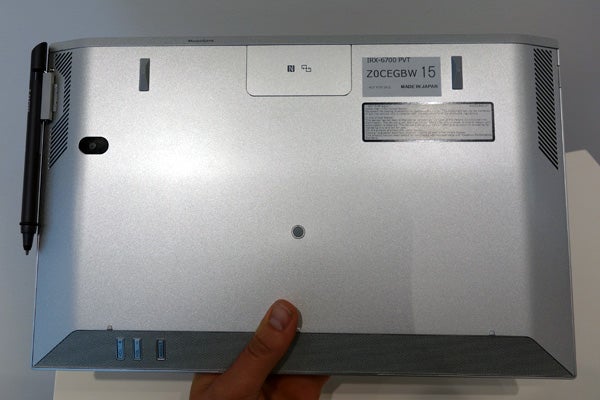 This is intended primarily for easy syncing with NFC audio kit, such as headphones and speakers. Conveniently, Sony sells a bunch of these exact things – but how many people do, or will, own them within the next year? Not many, we’d bet. 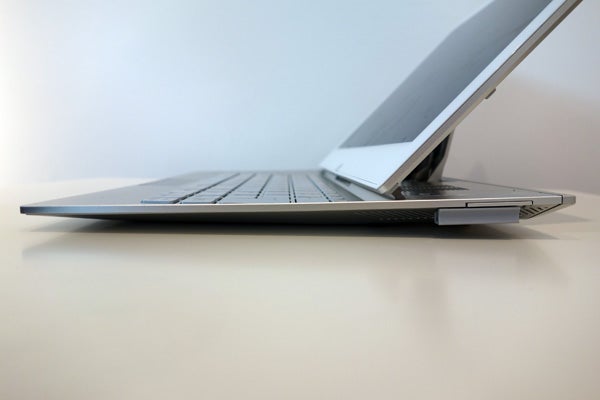 The closer you look, the more the Sony Vaio Duo 13 appears an ‘everything but the kitchen sink’ device that has a little too much of the oddball vibe of the original Duo 11. However, in use it still solves many of that earlier model’s problems, including a better keyboard, much better looks and an improved hinge. We’ll have to spend more time with it to decide if it makes a cohesive whole.