Introduction
The imminent arrival of the touch-friendly Windows 8 has seen all sorts of clever laptop/tablet hybrids being launched by all and sundry, and the latest twist comes from Sony. The Sony Duo 11 slides from one form factor to the other.

Design
The standout feature of the Duo 11 is of course its sliding keyboard/screen (whichever way you look at it). It works like side-sliding mobile phones such as the HTC 7 Pro, whereby you gently push the screen upwards and it springs up to be a laptop or push down on it to fold flat into a tablet form. 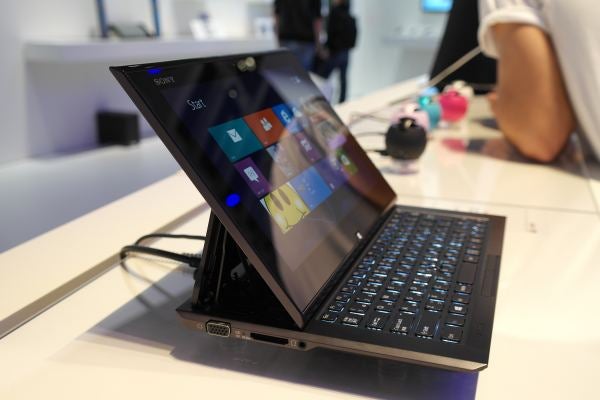 It’s pretty slick but immediately there’s a glaring issue. Like side-sliding phones, the fancy hinge means the screen ends up covering half the base, which in turn means there’s much less room for the keyboard and trackpad than on a normal laptop.

Sony’s solution has been to drop the trackpad and instead rely on the touchscreen and a trackpoint. We know some people still like the old trackpoints but not only are we not fans but they feel even more out of sorts with the latest gesture heavy operating systems. So to our minds the trackpad omission alone rules out this form factor compared to the many other laptop/tablet hybrids. 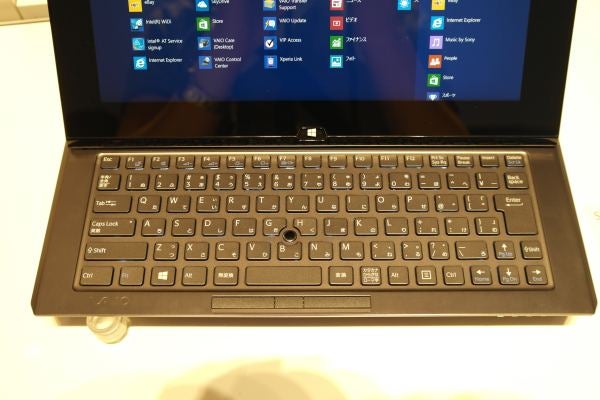 But, there’s more. Sony has also made a bit of a hash of the keyboard. It uses overly small keys, that are badly laid out and with enormous gaps in between – backlighting isn’t enough to save it. Our overall typing speed wasn’t too bad, but the process felt like considerably more effort than usual. 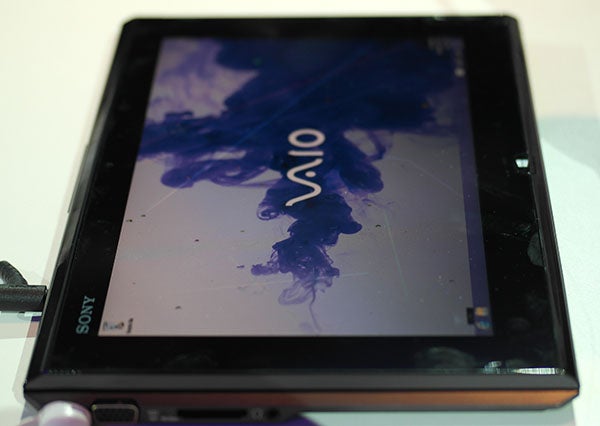 Finally, we’re not overly keen on the look of the thing. Yes, essentially it’s just a black slab like many laptops or tablets but its angular, bitty design just doesn’t really have a sense of desirability – at 17.85mm and 1.3kg it’s not particularly thin or light either. All that said, build quality seemed very good with premium feeling materials used throughout, just as we’d expect from Sony.

Features
So is the Duo 11 a complete failure from the off? Well, from our brief time with it so far we’re not ready to say for certain yet, and there are definitely some features in its favour, such as the screen. 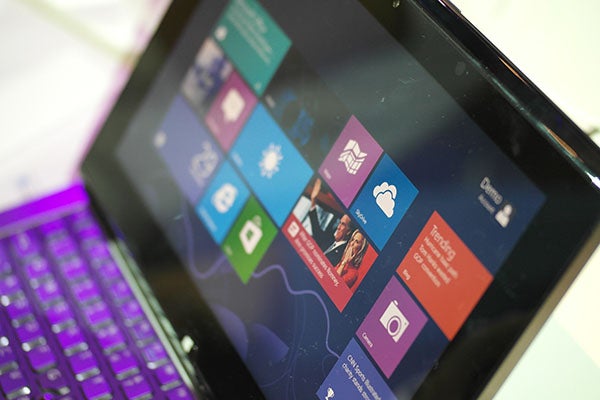 Despite having a diddy (for a laptop) screen, it packs in a high 1,920 x 1,080 pixel resolution. This makes it super sharp, which is particularly important for when using this laplet’s other nice feature which is the so called Digitizer Pen. We’re yet to confirm how sensitive the stylus is but it certainly felt impressively accurate in our use, and is a great addition with the highly touch-optimised Windows 8 running the show.

Specs and connectivity wise this is actually a very well equipped laptop considering its size. You get full size VGA and HDMI outputs, two USB 3.0 (we’d have preferred three USB and to drop the VGA, actually) Wi-Fi N, Bluetooth 4.0, GPS, digital compass, NFC and front and rear cameras. Processor options go up to Intel Core i7, RAM up to 8GB, storage up to 256GB SSD and Windows 8 or Windows 8 Pro are both on offer.

Final Thoughts
All of which leaves us with a peculiar beast. Essentially this is a premium Sony ultraportable laptop, with all the high-end features we’d expect of the company’s enviable history in that segment, but on the other hand the overall form factor doesn’t really convince us and that the keyboard is so poor is a major slip up.