Sony has always catered for those who like colour with its VAIO C Series laptops. We were rather impressed by the VAIO CW we reviewed back in 2009, except for its slightly off-pink tones. However, like the various C iterations before it, this year’s machines come in a choice of white, black, green, red, blue and orange, as well as pink. Of course, that’s only if you go for the smaller 14in model; much like old televisions, the 15in C Series only come in black and white.

Mind you, if you go for the VPCCA1S1E (not available in red or blue) you get more than just a pretty colour, as these laptops sport semi-translucent sections that scatter light to create a (very) subtle glow, an effect that varies in its efficacy according to colour choice – obviously, if you go for black you won’t have much luck here. You can check out what we mean in our Sony VAIO C Series hands-on, where we got to look at all the colours under ideal conditions.

Specifications are also not too shabby considering these are entry-level machines. The C Series come in a variety of configurations, with a choice of Intel’s Core i3 or i5 processors, backed by 4GB of RAM, hard drives up to 640GB, discrete Radeon graphics and a choice of DVD or Blu-ray drives. Our £650 VPCCA1S1E falls somewhere in the middle of the pack, but we’ll get to specs and performance later. First, let’s take a look at its unique design. 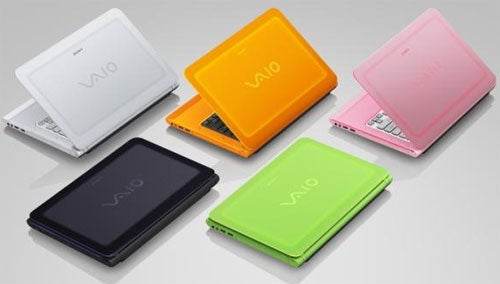 Our particular model is white, which means it’s predominantly white with silver and chrome highlights, and a black bottom. The sharp-edged lid, which sits a bit awkwardly on top of the protruding base, features a transparent layer over a diamond pattern framed by a white border.

It looks a bit ugly and cobbled-together in the daylight, and our white model doesn’t do much in darkness either; we reckon orange and green will be your best bets for mild neon effects in dimly lit rooms. On the positives side, the white finish does mean fingerprints and grease marks aren’t as much of a problem as with most glossy-lidded laptops. 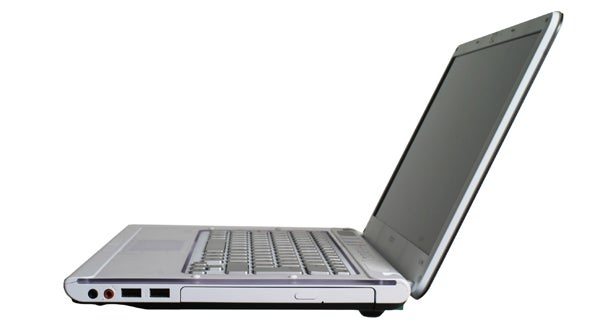 Opening the laptop up, the kindest description we can give is ‘quirky’. The plain matt plastic main chassis is complemented by a thick transparent layer surrounding the keyboard and forming the palm-rests, broken up by little rubber protectors and what we can only describe as rivet holes. We’re fairly sure the other versions would hold up better, but quite frankly, everyone who saw the VPCCA1S1E/W (i.e. the white model) thought it was unattractive and cheap-looking.

Incredibly, Sony claim that this plasticky machine is “the most beautifully finished VAIO ever”. We’re glad to say that that’s not even close to being the case when compared to its currently available products, let alone with carbon fibre stunners like the VAIO Z soon to make an entrance. 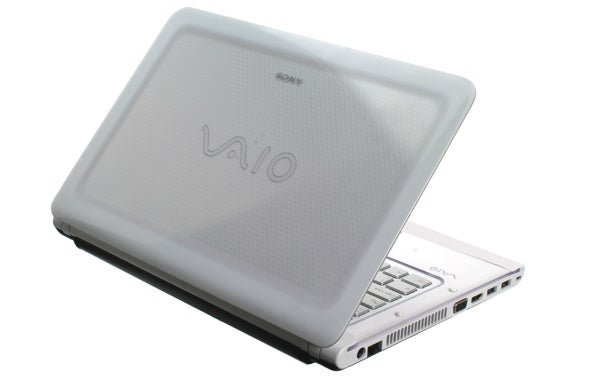 Nor does the VPCCA1S1E feel very solid. Inevitably there’s some creak and flex in the plastics, and as usual with Sony’s inexpensive laptops, there’s some keyboard flex. Though we don’t think it’s anything worth worrying about, it further undermines any suggestion that this laptop can play in the ‘designer chic’ field Sony appears to be marketing it towards.

Connectivity is decent, with all the essentials well catered for. Along the left you’ll find a Gigabit Ethernet port, VGA and HDMI for video, and both USB 3.0 and 2.0 ports for data. The front houses a memory card reader and physical wireless switch (always a feature we appreciate), while around the right we have headphone and microphone jacks, twin USB 2.0 ports and a DVD writer. All as expected then, since we didn’t think a Blu-ray drive would be included at this price point, though more expensive C models do come with one. 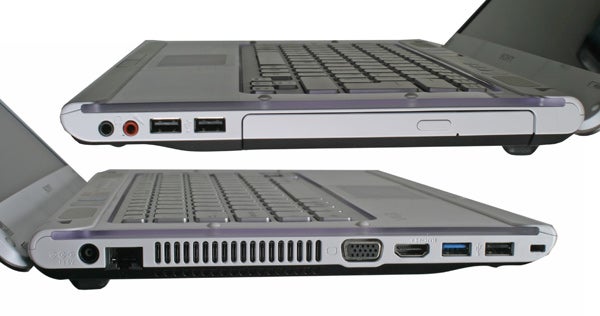 Aside from its semi-‘glow’ lid, the C-Series’ other unique claim to fame is its removable keyboard covers. With most of these laptops the keyboard area is a complementary colour or combination of colours. For example, you get an all-black keyboard on the green version, and a white area with silver keys on the pink one. That’s the same on our white model, and you can get any colour of cover to go over it.

Quite aside from changing the looks of your laptop, these covers also have a few practical advantages. For example, if you have children typing while eating sticky sweets or you’re working in the kitchen while sending messages and don’t fancy washing your hands every second minute, the machine-washable cover will ensure none of the grime gets on or between your actual keys. It’s a neat extra that we would like to see as standard on every laptop (since it’s a very easy, cheap addition), but hardly a reason to choose the C Series over its competitors. 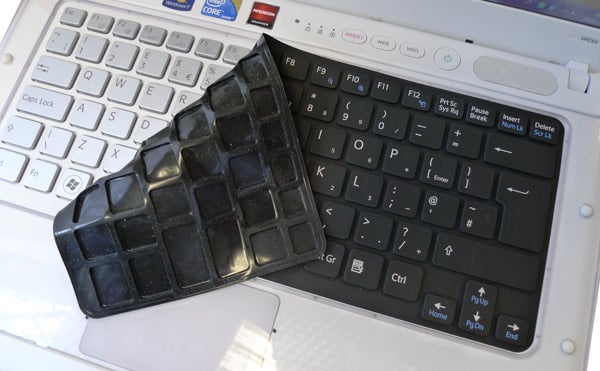 Thankfully, the keyboard itself might be. Noticeable flex aside, the well-spaced keys offer decent feedback with more travel than most chiclet keyboards manage, though they could have done with a bit more of a defined click. In a nice touch, they’re also fully backlit with attractive white LED lighting controlled by an environment light sensor. Keyboard backlighting is far from a given at the VPCCA1S1E’s sub-£700 price point, so it’s nice to find it here. 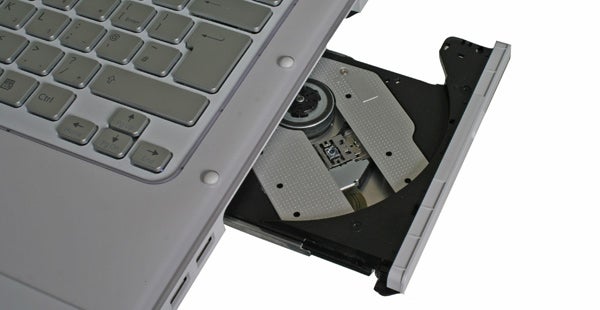 Above the keyboard you’ll find three shortcut buttons. The first, Assist, brings up VAIO Care, which is an interactive support centre that does troubleshooting, diagnostics, and recovery, or puts you in touch with Sony’s support. Though it offers nothing new, having it all on a single physical button is a great feature for those new to computers.

The second button, Web, is rather boring if you press it in Windows, where it merely launches the browser. However, if you press it when the computer is turned off, it boots into a Linux-based ‘lite’ OS (a process that takes about 19 seconds) which only lets you browse the web using Firefox, but supposedly triples the VAIO’s battery life compared to doing the same under Windows. The VAIO button opens the VAIO Media Gallery by default but is user assignable. 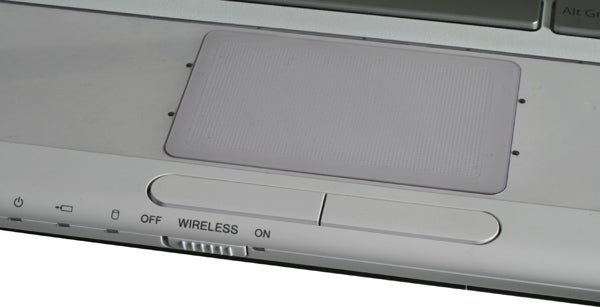 The touchpad sports a textured surface that’s just a tad too much like sandpaper for our liking. Personal preferences for smoothness aside, after extended use it may start to feel like the friction is wearing away the tip of your finger. At least it does mean you can’t miss the pad’s active surface in the dark, essential as it’s covered by the same transparent layer that covers the palm-rests and is not delineated in any other way. Its raised, individual buttons are within easy thumb-range and offer a positive, if slightly loud, click.

Though its chassis might leave us with mixed feelings, at least there’s nothing particularly unlikeable about the VPCCA1S1E’s specifications. It starts the show off with a healthy dual-core Core i5, which runs at 2.3GHz but can manage up to 2.9HGz thanks to Intel’s Turbo Boost, and with support for up to four virtual cores (or threads). Obviously this is not going to do the best job of highly intensive, multi-threaded tasks, but for this laptop’s target audience it should be more than sufficient.

It’s backed by the expected 4GB of DDR3 RAM, which is plenty for Windows Home Premium 64-bit to be getting on with. The hard drive is on the stingy side, with a 5,400rpm, 320GB model meaning you may need an upgrade soon – though of course external storage is cheap and plentiful, and with USB 3.0 to hook it up to, will be almost as fast as a local drive. Another minor budget point is that Bluetooth is version 2 rather than 3 (though this has very little real-world effect), but Wi-Fi is of course up to N standard. It’s also nice to see an HD webcam.

Dedicated graphics are also on hand in the form of an AMD Radeon HD 6470M with 512MB of RAM. However, it doesn’t hold up all too well as a gaming card, as evidenced by a relatively weak score of 23.4 frames per second in Stalker: Call of Pripyat at medium detail and a sub-native 720p resolution – though TrackMania Nations Forever hummed along happily at 83fps on the same settings. In other words, casual gamers only need apply.

If you’re more demanding in this regard, something like the Sandy Bridge version of the Dell XPS 15z or even the the MSI FX600 will do a better job (and that’s not to suggest that Nvidia cards are specifically better for mobile gaming, these are just random examples).

Still, at least what you do manage to run will look good on the 14in, 1,366 x 768 display. We found it to have decent horizontal viewing angles (though vertical ones were as poor as ever) with only minimal colour shift when sitting centrally. The glossy finish does cause annoying reflections in an environment with ambient lighting, but also lends colours that little extra punch and enhances perceived contrast. Not that the VPCCA1S1E really needs this, as it just about manages to distinguish the darkest shades and features even backlighting with no bleed. A lack of obvious banding or dithering also helps to make viewing a generally pleasant experience. So while it doesn’t live up to the standards set by the Samsung Series 9 900X3A, it does the job nicely.

Aurally, this Sony doesn’t hold up quite so well. While there’s nothing wrong with the sound its speakers produce, they’re lacking in volume and don’t manage much in terms of depth or bass. In other words, external models are recommended for serious entertainment.

Considering the VAIO C’s target market, we weren’t expecting to get all-day battery life, especially not when we noticed the removable battery only has a capacity of 4,000mAh/44Wh. Indeed, the VPCCA1S1E only lasted a minute over three hours in our low-intensity Productivity test with screen brightness at 40 percent and wireless radios turned off, so that’s pretty much the longest you can expect to get out of it.

Mind you, a lower spec C Series without the dedicated graphics should do a little better, but if you’re after a laptop for on the go, this isn’t it – especially since it weighs a not inconsiderable 2.45kg. The Toshiba Satellite R380 would be a far better choice in this regard, or if you want something with a larger screen, a cheaper configuration of the Dell XPS 15z (which despite being a 15.4in machine only weighs 2.54kg and will last you up to twice as long on a charge).

When we get to value, Sony doesn’t demand too much of a premium for this laptop’s funky looks. A bit of searching will get you a 14in C Series for around £600, though prices vary depending on your colour of choice. However, for £630 you can get a similarly-specified Dell XPS 15 (including the optional backlit keyboard), except with a larger, faster 500GB hard drive, superior Nvidia GeForce GT 525M graphics, better connectivity, a longer-lasting battery and far more configuration flexibility, not to mention that rather stylish aluminium lid. On the other hand, Sony does throw in a two-year warranty as standard, which is a £100 extra from Dell. 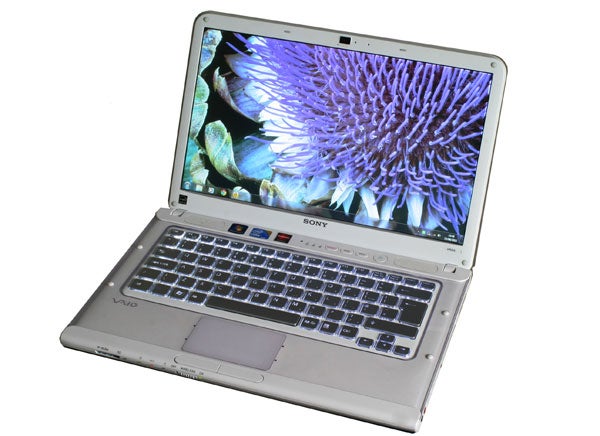 Basically then, it comes down to whether you want metal or neon (oh, and a rubber keyboard cover, of course). We know which we would pick, but if you’re after a particularly colourful orange, pink or green laptop that you won’t need for too long away from a socket, Sony has one of the only options on the market.

If you’re a fan of neon colour choices, transparent overlays and rubber keyboard covers, Sony’s 14in VAIO C Series is the only choice. A decent screen, backlit keyboard and two-year warranty as standard certainly don’t hurt it either, though it doesn’t excel in general performance and its battery life is below-par. If the warranty isn’t a primary concern, you can get better-specified, better-built laptops for less, but they won’t be as colourful.