One of the things I like about Sony is that – most of the time – it’s realistic about conditions in the market. How else could you explain this premium PC desktop speaker set which doubles as a dock, not for Sony’s own excellent Walkman players, but Apple’s more successful iPod line? In fact, this is a fantastically sensible product all-round, combining a USB PC speaker system with an iPod charging cradle, and allowing you to output PC and iPod audio and sync your iPod with iTunes all using the same bundle. 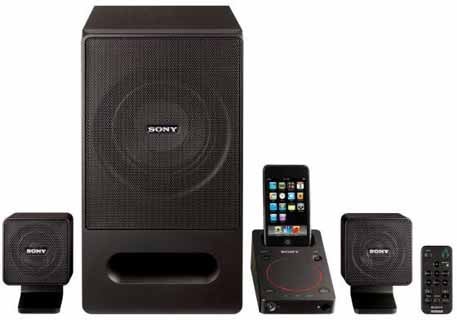 There’s no need to have multiple speaker systems in your living room or study, and no reason to fiddle around with lightweight cradles or USB cables. Instead, there’s always somewhere to keep your iPod charged and synced, and you can use the Apple player as your main music source with your PC switched off. It makes you wonder why so few manufacturers have tried something like this before.


The SRS-GD50iP system consists of four main components; a dock/control station which connects to your PC or notebook via USB, two 10W satellite speakers and a 40W subwoofer. The satellites are compact cubes which, thanks to their simple grille and matt-black finish, are very discrete. The subwoofer, meanwhile, is a similarly understated passive effort which could easily be mistaken for an old-fashioned bookshelf Hi-Fi speaker. 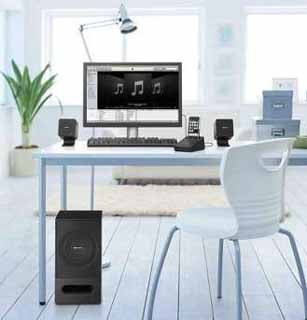 The control station is the really interesting bit, with the iPod dock sitting above a large rotary volume control which sits flush with the casing, with a circular red volume indicator inching steadily around it as you push the level upwards. Call me superficial, but I think it’s the coolest iPod cradle that I’ve ever seen.


At the rear of the control station you’ll find standard 3.5mm jack outputs for the satellite speakers, and a proprietary connector for the sub. The system is powered by a 19V external brick, and there’s also a 3.5mm line-in jack for use with other media players or (with the right adaptor) a games console.

In use, it’s all transparently simple. While your PC or notebook is switched on the SRS-GD50iP behaves like any other set of USB speakers, taking a digital stream straight from your PC and using the built-in amplifier to output to the satellites and sub. Plug in the iPod and press the input button, and you can listen to music direct from the portable player.


While plugged in the unit charges and syncs, much as it would if you had it hooked up to a basic docking cradle. There’s really not much more to it than that. This simplicity is actually a strength, and the large volume control with its highly visual level indicator is a genuine boon, allowing quickfire changes whether you’re listening to your iPod or playing games and movies on the PC. 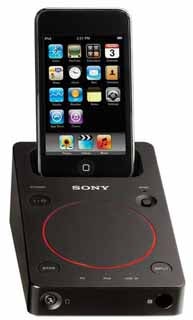 To be honest, I was expecting the Achilles heel with this one to be sound quality. For some primeval reason I still equate this with weight, and the satellite speakers and the subwoofer all feel suspiciously light. The same goes for the control station which, you’ll remember, houses the amplifier. The cabling is also thin, bog-standard wire, and the low-ish output ratings don’t exactly inspire confidence. Compare the SRS-GD50iP to, say, Creative GigaWorks T3 set or Acoustic Energy’s Aego M bundle and the Sony speakers just don’t feel like they belong in the same kind of price bracket. 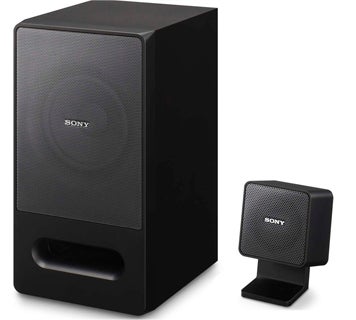 Yet in fact, I’ve been pleasantly surprised. Working as USB speaker set the sound is beefy, warm and very alive. Vocals and more stripped-back, acoustic sounds work particularly well, with the system revealing surprising amounts of detail in folky tracks from Cara Dillon and Alison Krauss. I’ve also had a good time listening to the Bill Evans trio’s classic Portrait in Jazz, thanks to clear yet rounded piano tones and a smooth, articulate bassline. The sound is surprisingly big, and there’s no jarring separation between the satellites and subs when it comes to reproducing the mid-range. Where the T3 set wins out is when it comes to clarity and detail.

There’s a sparkle produced by the Creative satellites which Sony’s compact cubes can’t match, and the T3s also have more punch when it comes to heavy rock sounds or orchestral tracks. The SRS-GD50iPs can pump out Uprising from Muse’s The Resistance with plenty of gusto, but the Creatives do a better job of handling the song’s dynamics, and lend the track more attack and attitude. With classical tracks like Vaughan Williams’ The Lark Ascending or Wagner’s prelude to Parsifal, meanwhile, the Sony’s exhibit that tell-tale boxed-in sound that shows you they’re struggling to resolve the full orchestra en-masse. 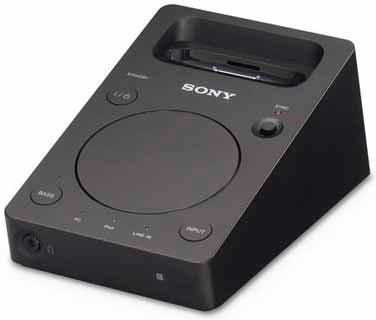 On the other hand, the Sony speakers do a better job than many comparably priced iPod docks I’ve heard when it comes to iPod playback. The same limitations apply as when they’re used as a USB PC set, but there’s enough detail and presence to handle most pop, rock, jazz, acoustic and classical material you might throw at it. The output isn’t what an audiophile would recognise as Hi-Fi, but it’s more than good enough for everyday listening by everyday folk.


It’s also worth mentioning that the SRS-GD50iP is a pretty versatile system when it comes to PC use. Really avid gamers might want something with more low-end punch for playing Modern Warfare 2 or Left4Dead, but the Sony system did a sterling job with the latter, delivering zombie groans, shotgun blasts and the usual lashings of blood and boomer bile with impact, effective reverb and a nice, wide soundstage. A quick blast through Iron Man’s action scenes gave me no reason to question the system’s cinematic credentials either, and while I’d prefer a set of T3s on my desktop overall, I’d be perfectly happy were the Sony system to find a permanent home on it. 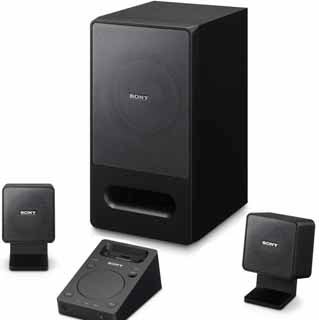 The key point here is convenience. If you just want a set of PC speakers, there are better choices out there for the money. Even if you can’t stretch to the Gigaworks T3s, you should be able to find a set of Aego Ms for £120 or less, while Creative’s T40 Series II speakers and HD50s can be had for under £100. And that’s ignoring some of Logitech’s fine entries in this field.


If you merely want an iPod Dock, meanwhile, then there’s plenty of competition here too. What the SRS-GD50iP does so well is give you both in one package, with a desktop system that fits your PC and your iPod. To my mind this makes up for the fact that sound quality isn’t as stellar as you’d get from some rivals. If that makes sense to you, then the SRS-GD50iP is an excellent buy.


Audio quality is more good than amazing, but as a PC/iPod combo the SRS-GD50iP makes a lot of sense.