Though it’s perfectly possible to have surround sound for your PC, in reality most people find it far too much of an inconvenience. Unlike home cinemas, desktop PCs generally live wherever there’s space for them and arranging the various speakers and hiding the wires is a chore too far.


As a result many people prefer 2.1 systems that benefit from being small, affordable and easy to setup and many companies produce a range systems of varying quality. Sony is just one of these companies, and it has sent us a set of its new 2.1 speakers, the SRS-DZ10s, that come in at a not inconsiderable £85.

At first glance the SRS-DZ10s look quite unusual; the tubular shaped subwoofer in particular being a unique component. As a set they are, however, undoubtedly stylish with an exceedingly smart brushed aluminium finish and satellites that are elegant in their simplicity. The unusual design of the sub is meant so you can place it horizontally or vertically on your desk, though why you’d want to do that rather than keep it under a desk is beyond me.


From a technical stand point the set outputs 37W in total, with the two satellites at 6W each and the sub 25W. The set is also magnetically shielded to prevent noise interference and damage to your monitor if you’re still using a CRT. 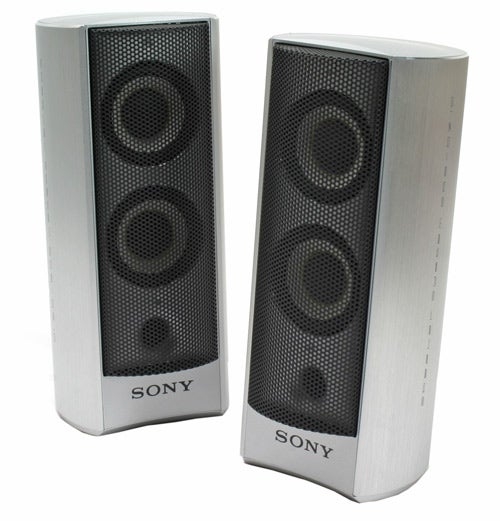 The satellites measure 63 x 143 x 63mm while the sub, with its rather awkward shape, measures 374 x 149 x 183mm. The set also comes with a control centre for adjusting volume and bass levels – this unit features two input jacks so you can plug in an MP3 player along with a PC or notebook. Finally there’s a headphone jack on the front of the control centre for easy access.


The satellites are made up of two small drivers and, as is typical for Sony, they look and feel like quality products. If you want speakers with a little style and panache then the SRS-DZ10s are certainly worth considering, and though the sub is an acquired taste it is at least: a) concealable and b) eye catching. 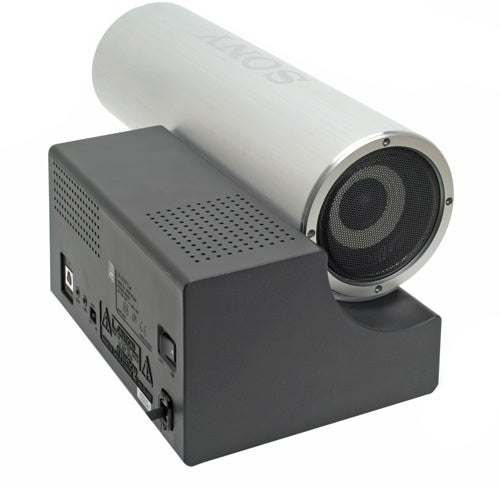 Although there are many benefits to 2.1-channel speaker sets there are challenges to overcome. Because you’re separating the high and low range with two different sets of speakers, getting a balanced sound is often a problem; one which the SRS-DZ10 often fail to solve.


This isn’t to say they are bad quality speakers, they’re not, but they’re not quite as versatile as one would like. For music they’re certainly very crisp, especially on the higher end, but at times percussion can sound rather grating, and even become annoying at times.

Of course, crispness and clarity is not necessarily a bad thing but balance is always essential, and this clarity on the higher end is not matched by a strong mid-range. Turning up the bass does alleviate the problem somewhat, but it never quite balances the sound out enough with the bass becoming rather raucous when tuned up high and the mid-range remaining rather anonymous.


The lack of mid-range is particularly evident when watching movies and videos, with the voices sounding rather distant. The speakers didn’t deal with action scenes too well either, with the high-range bias again spoiling the overall effect. 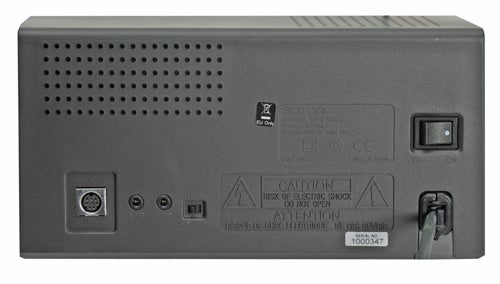 The lack of mid-range performance is also very noticeable when listening to music at lower volumes, where the percussion once again dominates to the detriment of everything else.


Predictably, this problem carries over to gaming where gun shots sound very tinny and unconvincing. Although these speakers are certainly intended primarily for music it’s still important to be versatile, especially when you’re paying a moderately large sum for a 2.1 set. 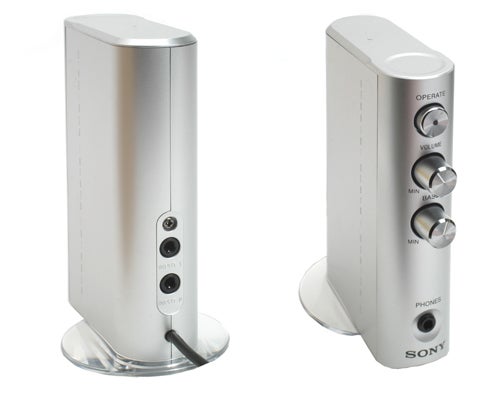 Happily there are some positives, with the set creating a nice spatial effect that fills rooms well. This makes them a good choice for casual music listening in a living room when connected to a notebook, or even an MP3 player. This goes at least some way to making up for the deficiencies in the balance, and its certainly a good deal less noticeable when the sound is given more time to blend.


Even with this caveat, however, the SRS-DZ10s are in a difficult position when you consider what you can get for the same price – or even for less. For £50 you can get the superb Logitech Z3s, which are still excellent value and their replacements, the Z4s, are also available for around the same price.

Alternatively, for around the same price, you can get the Acoustic Energy Aego M Speakers that Benny reviewed late last year, which excelled at musical fidelity. Plus, as an added bonus, they provide an option for a third centre speaker to create a 3.1-channel setup that’s ideal for watching movies on your PC.


Though stylish and eye catching, the SRS-DZ10s fail to provide convincing all round performance. Music playback is mixed with rather weak mid-range and an overly powerful high-end. They’re not really suitable for films and gaming either. They’ll do a reasonable job for the style over substance consumer, but there are plenty of alternatives that provide superior quality and better value for money.