Apple’s wireless music standard, AirPlay, has spawned all sorts of intriguing and diverse wireless speaker systems in recent months, such as the Libratone Live and https://www.trustedreviews.com/libratone-live-airplay-speaker_Portable-Audio_review Teac NS-X1 but the original wireless music standard, Bluetooth is still going strong, and one of the more recent entrants is the Sony SRS-BTV25, a compact speaker that Sony claims pumps out 360-degree sound.

We’re somewhat divided on the styling of this little ball of sonic fun. On the one hand it’s rather cute, with its white or black livery and spherical form with diameter of just 138mm. However, it’s a bit cluttered to truly win us over, thanks to plenty of multicoloured lights, buttons and sockets scattered about the place. It just doesn’t feel like the stylistic centrepiece we feel it needs to be to justify itself. In contrast, something like the similarly sized Aliph Jawbone Jambox has real design flair. 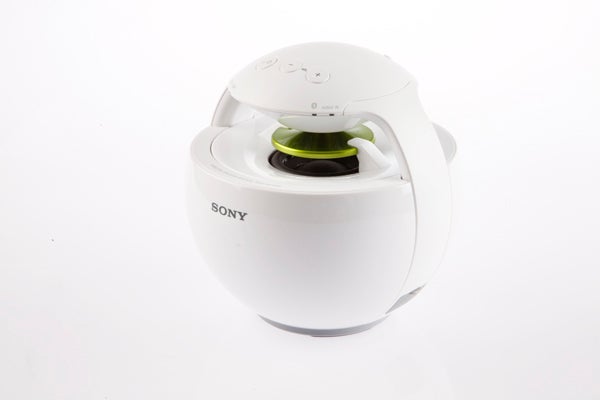 Its build quality also doesn’t blow us away. Its plastics are solid enough, its buttons are securely footed and have a nice action, and there’s enough weight to it to know it packs some reasonably good quality components inside. However, it is all plastic and when set alongside the Pasce Minirig – an £80 portable speaker that is stunningly designed and hewn from aluminium – you very quickly feel you’re perhaps not getting your money’s worth with the Sony. 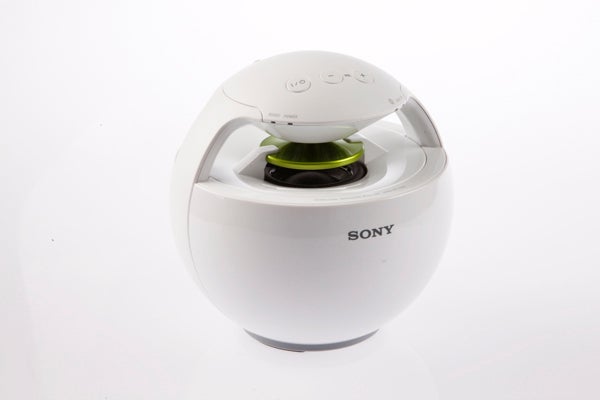 Looking more closely at those bits of clutter, up top are the six buttons used to control this device. At the front are three larger buttons for power and volume while round the back are further buttons for switching to the auxiliary line input, switching back to Bluetooth (and pairing Bluetooth), and a near-obligatory bass boost button. 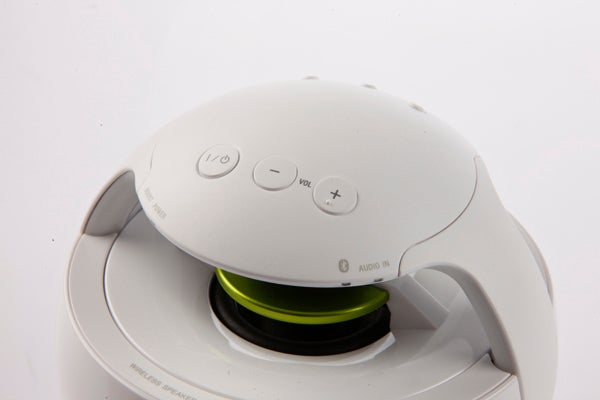 As for flashing lights, there are a total of four running round the front, indicating Bass Boost, Power, Bluetooth, and Audio In. And, they’re all different colours; red, green, blue and orange respectively. Along with all the buttons, they’re all useful in their own way but as mentioned, don’t create an overly appealing look. 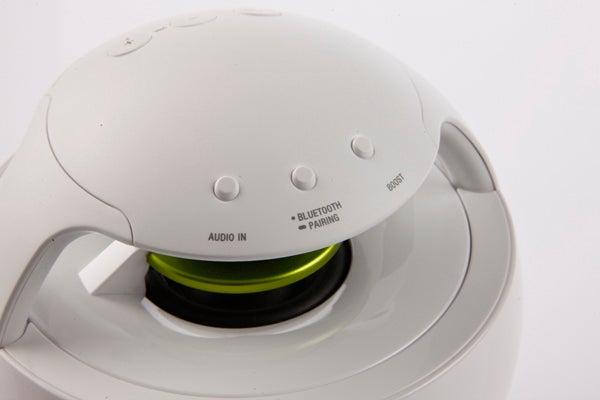 Working your way round the Sony SRS-BTV25’s few controls is a cinch, which is convenient as there’s no remote to fall back on. Pairing your phone is as simple as turning on the speaker,  Bluetooth on your phone, tapping the pairing button on the SRS-BTV25 and selecting it from the list that appears on your phone.

From there on in you can pipe your tunes out to the speaker from anything up to around 10m away. We tested this walking across our large office and we can confirm that you’ll be far enough away not to hear the device before it cuts out. Range is reduced when the signal has to travel through walls but the odd single wall should be no problem. 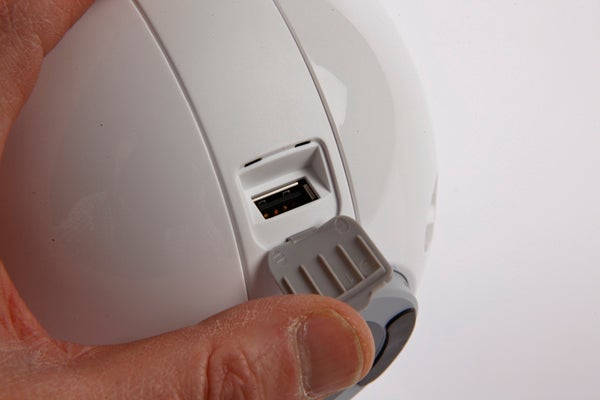 Should you wish to charge your phone too, there’s a USB port hidden behind a rubber flap on the right side. You’ll need to provide your own cable but at least this way you can guarantee you can charge pretty much any device you can think of.

There is a further socket round the back of the device which is for its mains power adapter. You see, this isn’t a battery powered device but rather must be tethered to the mains at all times. This in itself is not a problem but considering the relatively modest size of this device, you’d be forgiven for assuming it’s another competitor in the ‘portable’ speaker market.

So if it’s a bit iffy on the looks and build department, doesn’t have a remote and isn’t portable, what does the Sony SRS-BTV25 speaker do well? Simple, it sounds great.

That peculiar design is at least in part for a reason; housed in the large bottom part of the sphere is a relatively large 56mm (2.2in) driver while above this in the overhanging top section is a 20mm tweeter, and sitting between is an odd spinning top shaped plastic section. This plastic section that is used to merge and deflect outwards – in all directions – the sound this little device produces. And the combined effect is impressive. 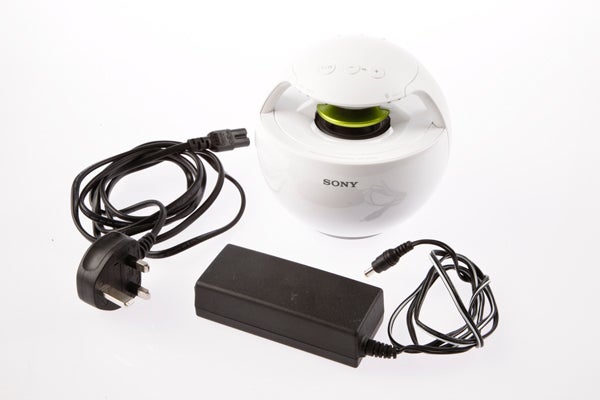 First and foremost is the surprising amount of power it can produce, with it easily filling a modest sized room. Okay, so you’re not going to shake windows with its 13W output but it’s perfect for background music for piping your favourite podcast throughout the kitchen while you do the washing up.

What makes it all the more suited to background listening is that 360-degree design. Place this speaker anywhere and no matter what direction it’s facing, everyone can get a good listen. Clearly this eliminates any sense of stereo so you don’t feel placed within the music – it’s clearly coming from ‘over there’ – but equally it means you don’t need to be in the sweet spot to get the best from it. 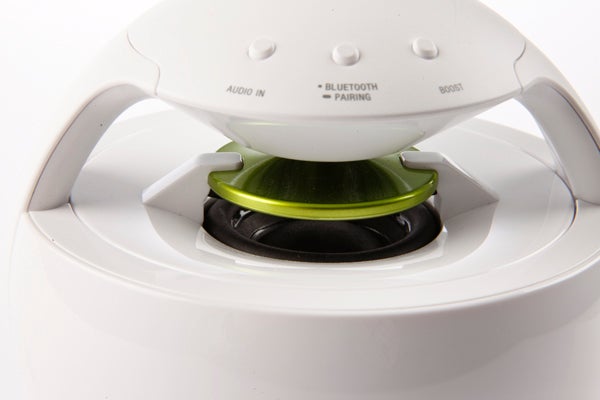 There’s a surprising amount of bass oomph too. When compared to the aforementioned Pasce Minirig, the Sony clearly shows the limitations of portable speakers’ size and battery power, supplying a genuine thump to kick drums and rumble to bass lines. What’s more this doesn’t come at the expense of clarity, the second driver filling out details nicely to provide an overall sound that’s detailed yet full. 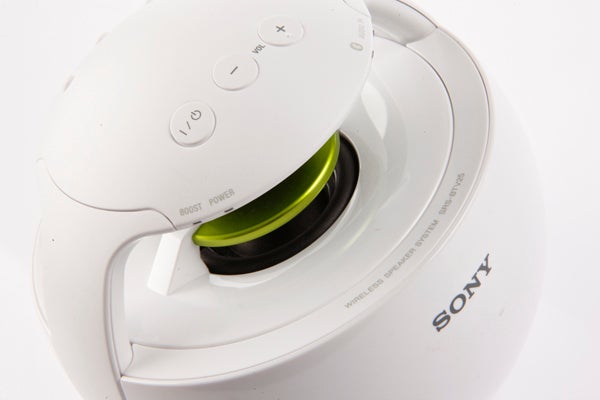 However, while impressive considering its size we still can’t escape the feeling that Sony either needed to make this device bigger, more powerful and more elegant or make it battery powered and portable. After all, if all you’re looking for is a device that’ll suffice for a few background tunes, a large number of portable speakers deliver – the new Nokia Play 360 a prime example.

The Sony SRS-BTV25 is a great-sounding Bluetooth speaker with a cute spherical design. However, while certainly a bit better sonically than most portable speakers, it isn’t enough to justify either the inconvenience of needing a plug socket or its high price. It’s not bad value per se, considering its audio quality, but we suggest most people would be happier with either an almost as good sounding battery powered unit or a bulkier, more powerful mains system.