Nobody likes being subjected to other people’s music on a hot summer’s day when they’re out trying to enjoy a picnic. Whether it’s youths with music ‘blaring’ from the tinny speakers on their mobile phones, crusties playing the acoustic guitar and bongos, or students with portable stereos, there’s nothing worse than having your peace and quiet disturbed.


The only way to fight back is to take your own tunes and drown everyone else’s out. One way to do that is to take a set of speakers out with you and hook them up to an MP3 player. And if they’re a Bluetooth speaker set; that’s even better for your picnic – no wires means you don’t have to leave your MP3 player lying around tethered to the speakers, and there’s also less likelihood of your drink-sodden mates trampling it into the ground or tripping over the cable. 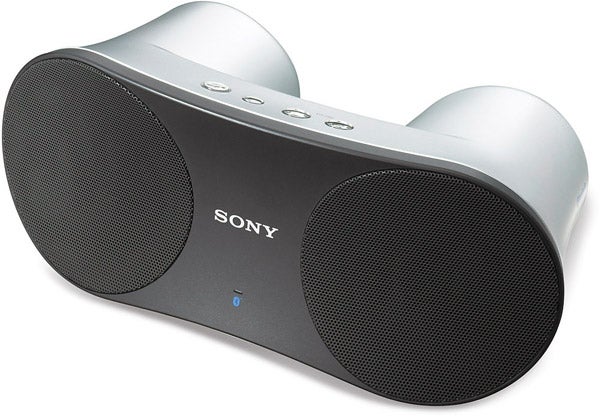 It’s an area of the portable music industry that’s been slowly and steadily growing in recent times, and with many mobile phones now equipped with AD2P-enabled Bluetooth, that looks set to continue. Sony is the latest manufacturer looking to get in on the act, with its SRS-BTM30 speakers joining the likes of Gear4’s Blackbox and Blackbox Mini speakers and Parrot’s Party system.


In the looks stakes, these speakers make a good first impression. Shaped like a small pair of bongos, the SRS-BTM30’s are designed to be stood on their side for on-the-shelf use, or on end for placement on the floor, firing upwards. They draw their power from either the mains or three alkaline or rechargeable AA batteries; and though your mileage away from the mains will vary, Sony’s quoted 10 hours should see you through a couple of long, lazy summer afternoons at least.

There are other sensible design touches, too. Each of the SRS-BTM30’s drivers is covered by a thick, metal grille, protecting it from general abuse, and the speakers are pretty light, too, so you’ll be able to sling them in a bag without too much shoulder strain. The only thing that counts against them in terms of physical design is their bulk. That bongo-style profile means they’re not as slim and baggable as the BlackBox Mini or even the BlackBox, and both of those speakers come with their own case for protection; the SRS-BTM30’s do not.


Another thing that the SRS-BTM30’s don’t do well at is ease-of-use. Now when Bluetooth connectivity is the main selling point of a device you’d think the manufacturer would bend over backwards to make it easy to set up and use, but no, not Sony. One test I always run on Bluetooth speakers when I first get them out of the box is to try to pair them with a mobile phone without referring to the manual. And with the SRS-BTM30’s, I was still there ten minutes later, trying to figure out what to do.

The main problem is that there’s no ‘pair’ button, or even a button with a Bluetooth logo on it. Apart from the on/off button and volume buttons, all you get is a key labelled, obscurely, ‘ID set’. Even if you figure out that this is the pairing button you’ll be hard pushed to work out exactly how to use it. Normally, you’d simply press and hold for a number of seconds, then enter a standard passkey; here you have to first switch the speakers off, then hold the ID set key down for seven seconds before it enters pairing mode.

It’s bad enough that Bluetooth is so darned un-user friendly to begin with, but this is just plain barmy; why manufacturers can’t simply label such buttons sensibly, I’ll never know. And it’s surely not beyond the wit of man to put simple instructions on a label somewhere discreet either: ”Turn off device. Press and hold for seven seconds until lights flash to pair with a new device. Enter 0000 on your MP3/player/phone if it asks for a passkey”, wouldn’t exactly take up much space.


With the significant hurdle that is pairing dealt with, you’ve got to contend with the SRS-BTM30’s rather average Bluetooth reception. I tried pairing it with three different mobiles and a laptop with Bluetooth built in and at a mere two metres distance I had dropouts with each and every device. If you put your body in the way it gets worse and annoyingly, once you experience a gap in the music, the speakers then speed the music up in an attempt to catch up with the player instead of just rejoining the track at a later stage. There is at least a 3.5mm audio input jack on the rear – for when you get frustrated with the reception. 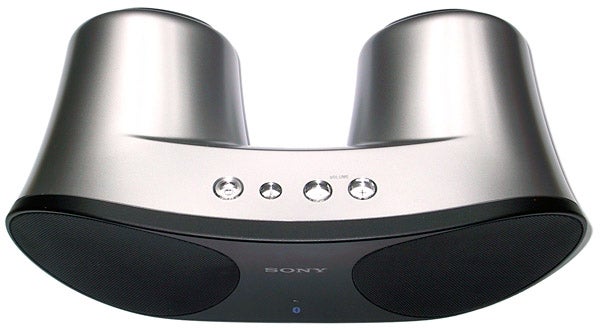 Unfortunately sound quality doesn’t remedy any of this either. The SRS-BTM30’s output may be clear and well-balanced, and at moderate volumes it actually sounds pretty good – they’re much better than the Gear4 BlackBox in Bluetooth mode, for instance. But the 3W per channel output just can’t cope when you pump the volume right up: they first start to buzz and then distort rather disturbingly. Reaching top volume is categorically out of the question. On the flip side, there’s also no mute button anywhere on the speakers. Instead, you have to simply turn off the unit if you want a moment of quiet, but this then requires you to repeat the pairing process with your player once you turn the speakers back on again.


All-in-all Sony’s attempt at producing a decent Bluetooth speaker system is a big disappointment. They’re not easy to set up and use, sound quality is distinctly average at loud volume and Bluetooth reception is also nothing to write home about. You might be able to forgive all this if they were cheap, but here you’re in for yet another disappointment: at £75 the SRS-BTM30s are expensive and definitely not worth the price.