Sony has never made a big song and dance about its surveillance products but it has a surprisingly large range of network IP cameras and with prices to match most pockets as well. The SNC-M3W is a fine example as this eyeball camera offers wired and wireless capabilities, pan and tilt, a maximum 30fps, internal and external audio functions plus motion detection and all at a price that competes very strongly with D-Link’s DCS-5300G. 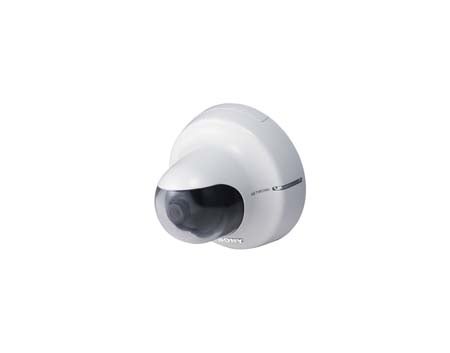 If there’s one thing Sony excels at it is design so it’s no surprise that the camera not only looks good but is well built too thanks to the lens and golf-ball style mounting protected inside a clear plastic shell. However, D-Link wins out on general coverage as the DCS-5300G can pan across 270 degrees and tilt through 90 degrees whereas the SNC-M3W can only manage 120 degrees and 70 degrees respectively. D-Link’s wireless support is also better as Sony offers 802.11b operations whereas the DCS-5300G is one of few network cameras that supports 802.11g as well. At the rear of the SNC-M3W is a small clip-on cover while underneath are Fast Ethernet and power ports along with external microphone and audio out sockets for two way communications. During testing we found the internal microphone was sensitive enough to pick up all audio sources in the surrounding area.


For installation Sony provides a small utility that scans the network for cameras and displays them in a list ready for configuration. From here you can select IP address settings, modify the HTTP port number, set the date and time and add some useful network bandwidth restrictions from 0.5Mb/sec to 4Mb/sec or allow it unlimited usage.


The web interface opens with a live view complete with a set of image controls to the left. These enable you to select one of three resolutions, take a snapshot and open a control pad to operate pan and tilt functions. For the latter the camera can also be controlled by using the mouse pointer within the image window. A rudimentary digital zoom feature is also provided where you can select an area in the image and zoom in to around 2X normal size. Access security extends to a list of up to nine users where you can allow them to view and control the camera or stop individuals from fiddling with the pan and tilt controls. Up to four customizable windows can be placed in the viewing screen for motion detection and slider bars determine how sensitive each one is to movement. This feature only functions with MPEG4 selected and when a trigger is activated the camera sends an email alert but cannot attach an image snapshot to it.

To use wireless access the camera must be physically disconnected from the LAN and restarted as it doesn’t support both modes simultaneously. The reason for this is that the camera uses the same IP address for the LAN and WLAN interfaces. Wireless mode functions in either Ad Hoc mode for a direct connection to a client or in Infrastructure mode where it needs to know the SSID of a wireless access point. You can also implement 64/128-bit WEP encryption for either mode. We had no problems linking the camera to a ZyXEL Prestige 2602HW access point in Infrastructure mode and accessing it via a wireless equipped notebook. As our test access point had LAN ports as well we could still access the camera from our wired clients although with an 11Mb/sec link to the camera performance will suffer as more clients use it. Using AirMagnet’s wireless network analyzer software we saw a single wireless client connection drawing around 1.5Mb/sec of bandwidth. 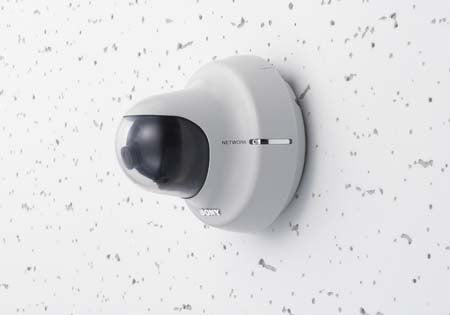 So far so good but on first contact with the live view screen it’s abundantly clear that this camera’s Achilles Heel is its image quality. For such a big name in the imaging industry we were surprised at Sony’s inability to deliver a decent picture. We tweaked the image quality settings in both MPEG4 and JPEG compression modes but in both cases we found the image poorly focused, responding badly to both high and low light levels and with a slight case of the blues as well. As you can see from the accompanying screenshot D-Link delivers a far better quality with a much sharper focus and better colour balance.


Sony’s software bundle includes a smart utility that displays live feeds from up to four SNC-M series cameras in the same screen. It’s a handy tool that provides access to all pan, tilt and audio functions and can run manual and scheduled video recordings and store the resultant files in a destination of your choice for playback and analysis.


It doesn’t matter how many features a network camera has as its ability to deliver a good picture is paramount. Sony’s SNC-M3W certainly has the look and delivers a fine range of capabilities but at this price we would have expected image quality to be much, much better. If you can do without wireless support then check out Panasonic’s diminutive BL-C10 as this offers a similar level of features and image quality but costs a lot less.