And so to that crippling factor that’s the most off-putting aspect of owning a smartwatch, bar the Pebble with its E-ink screen. The SmartWatch 3 packs a 420mAh battery, which is the biggest capacity yet on an Android Wear watch – Sony claims it will last you two days.

If you keep use limited to receiving notifications and turning off the always-on display mode, you’ll get close to that two days and not much more. There’s a battery-saving mode, but it doesn’t eek out that much more life.

Make use of the GPS tracking and it’s a different story, getting you close to a day and a half. Using the MyTracks app to map a 30-minute run, the battery dropped from 90% to 70%, so if you’re into long-distance running, you’re going to struggle getting better use when compared to a dedicated GPS-enabled sports watch.

Something we really like is how you have to charge the SmartWatch 3. It doesn’t have wireless charging, but we can live with that, as it can be juiced up via a standard Micro USB cable. There’s no ugly docking cradle to carry around and the same cable you use with your smartphone – assuming you’re not an iPhone user – can be used to power it up. It doesn’t need long to charge, either, taking less than an hour to get from 0 to 100%. 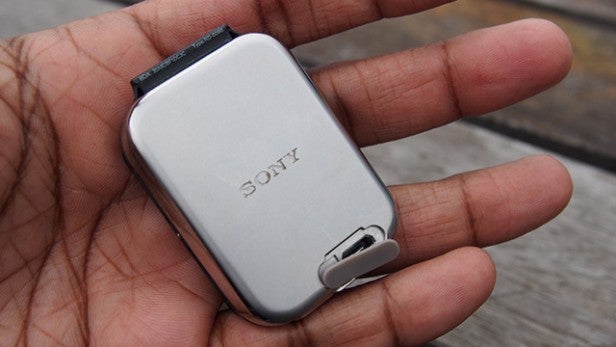 Should I buy the Sony SmartWatch 3?

It’s slim pickings for Android Wear smartwatches right now and, if we had to put the Sony SmartWatch 3 in a pecking order, it would be somewhere below the LG G Watch R, currently our favourite, albeit still flawed, Android Wear watch.

It’s a shame, because Sony had a great opportunity here to offer something entirely different – a sports-centric watch you didn’t have to rely on your smartphone to get the best out of.

Unfortunately, the inevitable battery-sapping GPS, missing features like a heart-rate sensor and an altimeter, and broken features such as offline music playback mean it’s more of a disappointment than an Android Wear revelation.

Sony’s first Android Wear watch is a big improvement on previous smartwatch attempts, but it’s still flawed and doesn’t get the best out of its most unique features.