When we first learned of the Sony S2 Android tablet, we were excited. Very excited. And our eyes-on at Sony’s
recent showcase event has done little to alter that. You see, the S2 is a
tablet with a difference: it’s a dual-screen clamshell design.

While we’ve seen a few other examples of this in the
past, none were running Honeycomb, nor were they backed by a company with the
resources and design experience of Sony. The S2 features two 5.5in displays,
which fold open like a book. This makes it far more pocketable than your
average 10in tablet, and protects the screens from wear and tear.

But the advantages aren’t just limited to transport. You
can angle the displays at various degrees just like on a laptop, so that when only
using one you can put it on a table or desk at whatever angle is comfortable
for you. When it comes to consuming content, it also opens up a whole world of
possibilities.

For example, you can have the email or document you’re
editing unimpeded on one screen while the virtual keyboard is on the other. Or
play a Youtube video in one while browsing on the other. You’ll also be able to
put the controls for games on one screen leaving the other unobstructed for
maximum gaming pleasure.

Of course, how well all this works depends on how well
Sony has integrated dual-screen functionality into the Android OS, and we hope
that many of its own apps and games will be specifically designed to take full
advantage. But the potential is undeniable.

As to the rest of the device, it’s glossy black with
seamless bezels on the inside, and matt white or black on the outside. So yes,
glare and reflections will be possible problems, but at least the outside
shouldn’t be covered with fingerprints and easily visible scratches. Its
rounded edges and curved back(s) should also make the S2 comfortable to hold,
and it certainly looks attractive in a cute kind of way. Our only niggle is
with the yellow power plug, which is a bit jarring with the rest of the black
& white aesthetic.

Unfortunately the S2 doesn’t have an IR emitter like its
larger S1 sibling, a real shame as that is one of our favourite points about
the 9.4in device. Connectivity is also a little lacking with no HDMI output,
though a USB 2.0 port does make up for this somewhat. And, just like the S1, it
still has Sony’s neat ‘throw to TV’ function: simply hold the tablet in front
of your telly, swipe your finger upward off the screen rapidly, and what you’re
viewing on the tablet should appear on your television – ingenious! 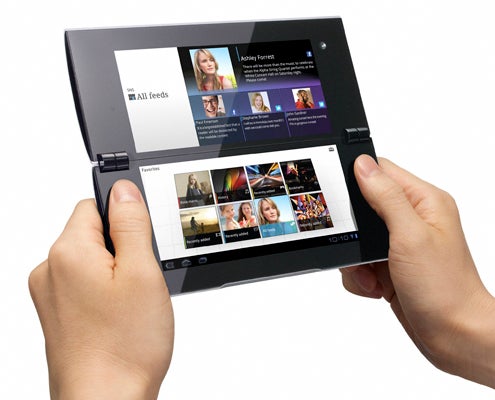 Another feature unique to Sony’s tablets is their PlayStation Suite compatibility. Just like the company’s Xpreia Play, this gives you access to an impressive selection of games,
including PlayStation 1 favourites and new titles specifically designed for the
mobile devices and their Tegra 2 innards. In yet another nice touch, you’ll be
able to hook up a proper PS3 controller to play your games with, though with
its dual screens, the S2 should already provide a better gaming experience than
most tablets that lack physical controls.

Where hardware is concerned, we’re dealing with the same
Tegra 2 internals as Sony’s S1, and the S2 will have both Wi-Fi and 3G as
standard, suggesting that it’s aiming for both mobile phone and tablet markets. 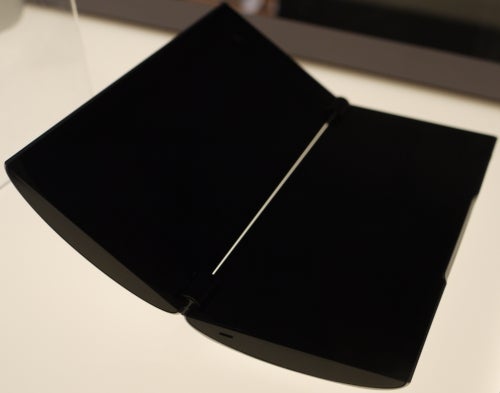 If Sony can make the dual 5.5in screens play nice with
the Honeycomb OS, apps and content, this Tegra 2 clamshell tablet has the
potential to be a game-changer. Already its pocketable form factor gives it a
significant advantage over the iPad and other larger tablets, and with content
to suit it could be a winner.