Our full review of this product, which is now called the Sony Tablet P can be found here: Sony Tablet S

We first told you about Sony’s mysterious S1 Android tablet in February, but now we’ve had a proper eyes-on – alas, no
touching was allowed and the tablets were securely encased, but we can still
bring you our impressions on the design and a few more tasty titbits on its
features. 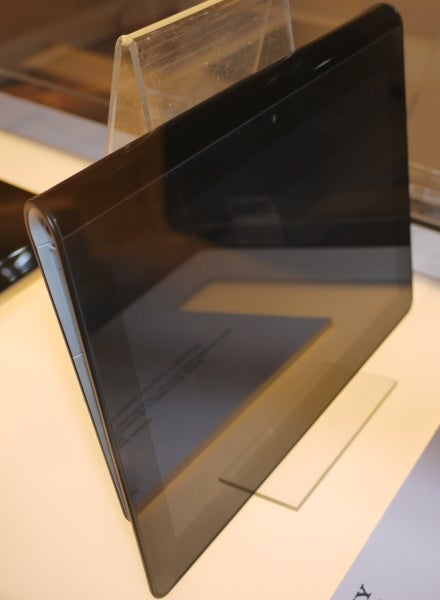 The S1 is the larger of Sony’s two Android tablets, along
with its S2 sibling which is a unique dual-screen clamshell device. The S1, on
the other hand, only has a single screen, making it a more traditional tablet
like the 2 or Android rivals such as the Eee Pad Transformer.

However, the S1 does plenty to stand out from the
competition. For one thing, there’s its unusual shape. It’s a bit like a folded
newspaper, with one thick side and the other tapering to a finer edge. Whether
you find the design attractive is probably a matter of taste (we’re cautiously
optimistic about its look), but it does have practical advantages.

For one thing, the thicker side (and off-centre point of
gravity) should make it easier to grip and hold – especially in portrait mode, which is
the most common way to orient a tablet for browsing the web and reading
documents. To aid its grippy-ness there’s a dotted pattern texture on the back,
which also contributes to the unusual aesthetic.

The screen itself is also an unusual 9.4 inches, compared
to most other Android tablets which sport 10.1, 9.7 or 8.9in screens, though it sports a fairly typical 1280 x 768 pixel resolution. Unfortunately it’s as glossy as most of the others so fingerprints and reflections will play havoc, but it is beautifully
integrated with a seamless bezel, much like the iPad.

We couldn’t tell whether there was an HDMI port or other
video output hidden behind the cover on the left, but for those who have
DNLA-compatible televisions, Sony’s unique content-‘throw’ ability allows you
to ‘swipe’ content onto the big screen. Simply hold the tablet in front of it,
swipe your finger upward off the screen rapidly, and what you’re viewing on the
tablet should appear on your TV – ingenious! 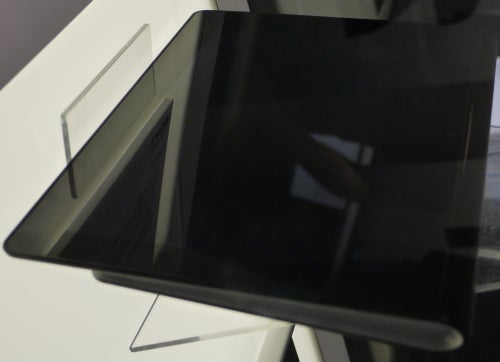 Another, even niftier addition, is that the S1 can be
used as a universal remote control. And we don’t mean through Wi-Fi or some
complicated wireless setup. Sony’s larger tablet actually has an IR emitter
built-in so that it can work with pretty much any device you’d care to name,
either by inputting a code or learning from the device’s remote. Logitech’s
Harmony 1100 had better watch out!

Another feature unique to Sony’s tablets is their PlayStation Suite compatibility. Just like the company’s Xpreia Play, this gives you access to an impressive selection of games,
including PlayStation 1 favourites and new titles specifically designed for the
mobile devices and their Tegra 2 innards. In yet another nice touch, you’ll be
able to hook up a proper PS3 controller to play your games with. Naturally, the
S1 will also provide access to Sony’s video and music streaming services. 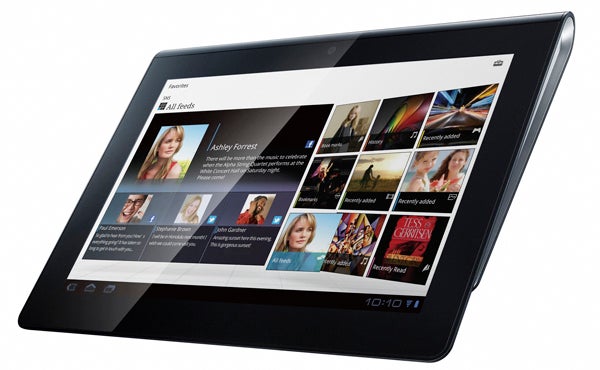 Aside from this, we didn’t note much that’s surprising.
The tablet will sport a version of Android Honeycomb when it’s released. The models we
were shown were running version 3.0, but this may well be upgraded before
release. The only connectivity we can confirm so far on the S1 is at least one
USB 2.0 port (giving it one up on the iPad 2 and Eee Pad Transformer) and a 3.5mm headphone jack, in addition to a selection of
physical controls. Front and rear webcams are also on the menu, and both Wi-Fi
and 3G versions will be available.

We were given no firm UK pricing or release date, but we
reckon prices will be in line with the competition, while we’ll see these
puppies on store shelves well before Christmas. The S1 designation is a codename
that might well change before release. Whatever it ends up being called, we’re
certainly looking forward to something a little different, in a tablet market
where many Android models are only really distinguishable by their finish and
branding.