There’s plenty of decent content on Sony’s Smart TV system. Most the major names are there, including: BBC iPlayer, Demand 5 (Channel 5’s catch up service), BBC News, Sky News, LoveFilm and Netflix. Sony also has a dedicated BBC Sport app, not to mention YouTube and Daily Motion. There’s a very large collection of other, niche, video apps, but 4oD and ITV Player are conspicuous in their absence.

A decent collection, overall, though a little short of the Samsung Smart TV system, which has all the UK’s catch-up services onboard.

While the main smart menus are less sophisticated than we’d expected, Sony’s interface does still have a few interesting tricks up its sleeve. The first of these is a new ‘fast zapping’ system that turns out to be an inspired little tool for quickly surfing other content lists while you keep watching TV. 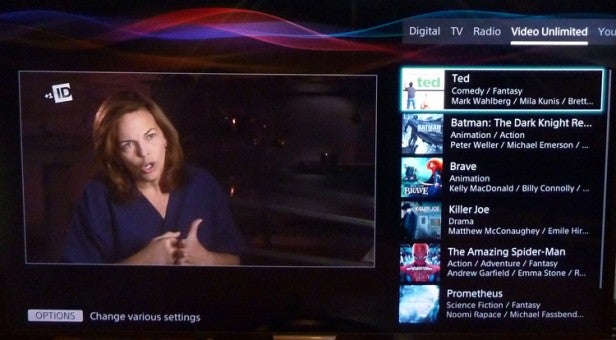 All you have to do is press up or down on the Programme select button and a simple vertical text list on the right of the screen pops up alongside a reduced version of the TV picture, with you able to skip extremely quickly through the listings until you get to something that interests you.

The first column of Fast Zapp shows a list of all the current TV programmes on, while pushing right on the Fast Zapp menu gets you to a fast-scan list of radio channels. Right again and you can zip through a list of recommended titles from Sony’s Video Unlimited platform. Select one of these titles, and you get a trailer of it or, if you press select during the trailer, you’re taken through to purchase information ahead of being able to go on to watching the film.

Push right one more time in this Fast Zapp menu, and you get a fast-scan list of the latest ‘hot’ YouTube videos.

While there’s certainly scope for refinement with Fast Zapp, it’s already one of the best and most promising tools for streamlining content access we’ve seen from a smart TV to date.

Another thoughtful content finding idea is a History section in the Sony Bravia KDL-55W905 main menus. From this you can access a list of the most recent channels and AV inputs you’ve watched, which turns out to be a surprisingly efficient way of getting to stuff you want to watch. 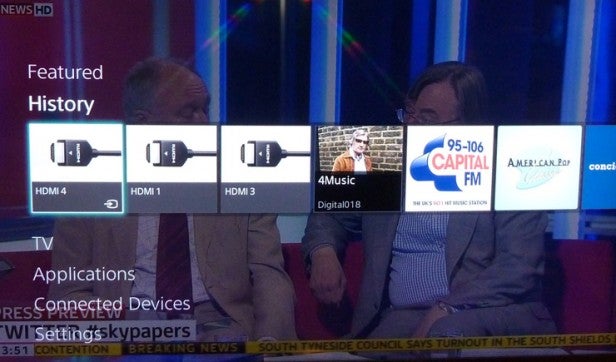 As with many other brands this year, Sony ships the upper tier of its TVs with two remote controls: one standard one and one ‘fancy’ one. In this case the fancy one doesn’t sport a touch pad like the second remotes you get with Samsung and Panasonic’s 2013 premium TVs, but it does feature something arguably even cooler: NFC support.

This means that if you’ve got a mobile device that supports NFC technology – such as, of course, the Sony Xperia Z – you can just touch the NFC ‘tag’ to the marked position on the remote’s rear and voila: your phone/tablet will pair with the TV, letting you mirror its content directly onto the TV screen without even using your home network – i.e. no router required.

This is a brilliantly quick and simple away to share content on your mobile device with a wider audience. The fidelity of the mirrored images on the TV is remarkably good, too.

Naturally Sony’s smart TVs also support more traditional content sharing with DLNA-ready PCs via their LAN or built-in Wi-Fi connections. But it’s hard not to think that NFC is the future so far as content sharing is concerned. Especially considering how damn cool NFC touching technology looks and feels. Seriously, casually show your NFC tech in action and it’s almost certain that women will want to be with you while men will want to be you…

It’s quickly become apparent that 2013 is the year of the smart device TV app. So it’s no surprise to find Sony offering one too: TV SideView, for Android and iOS. But a delve through the features on offer through this app reveals it to be a rather mixed effort. 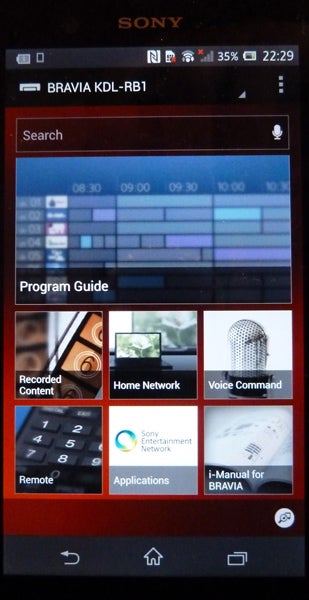 The app is easily the most prettily presented such app we’ve seen to date, and it runs slickly and stably enough to support such whizzy graphical touches as sliding icon menus.

Occupying the majority of the screen layout is a link to a program guide. Being able to scroll swiftly up and down and left to right through listings using your phone or tablet’s screen, without having to disrupt what’s been watched on the main TV screen, is a much better browsing solution than trying to use a cumbersome on-TV EPG.

If you select a programme from the guide you’re taken to a separate page showing you a still from the show plus options to ‘watch’ (if it’s on now), ‘record’ (onto a USB storage device connected to the TV) or ‘Share’ on Facebook or Twitter.

Scrolling down reveals further information on the show, a link to ‘related content’, tweets relating to the show, and information on the cast and crew. Some of this cast and crew info can be a little ‘off beam’, though; for instance, selecting Deal Or No Deal revealed that as well as Noel Edmonds, the show features Aaron Paul, better known as Jesse Pinkman from Breaking Bad… So THAT’S who the banker is.

Below the program guide icon on the TV SideView main screen is a link to
your recorded content, so you can select it for playback on the TV, or
delete it without having to disrupt your TV viewing.

Alongside
the Recordings icon is a Home Network selector, via which you can
conveniently browse content on your networked media devices. Once you’ve
found a file you want, you can quickly send it to your TV screen by
selecting it on the app.