The Sony RX100 IV is the fourth instalment in what has become our favourite compact camera series. Since its beginnings in 2012, it’s given us pocket-friendly models that offer image quality good enough to satisfy high-end DSLR-wielders on those days when taking out a large camera just isn’t on the cards.

This means the RX100 IV is likely to work perfectly as an all-purpose camera for about 90 per cent of people. If not more.

There have now been two newer RX models since the RX100 IV. In 2016 the Mark V introduced high-speed shooting with a 24fps burst mode for action photography, while the Mark VI recently changed the lens for the first time in three generations to a much longer 24-200mm zoom.

If you don’t need that kind of reach, though, then it’s still very much worth considering its three predecessors, all of which are still on sale. With improvements since the Sony RX100 III mainly based around shooting speed, video and EVF quality, we think some will be just as happy with Sony’s cheaper, older RX models.

Though its current price of £699 isn’t exactly pocket change, you’ll discover that there’s plenty to love about the RX100 IV, even if it is now a few years old. 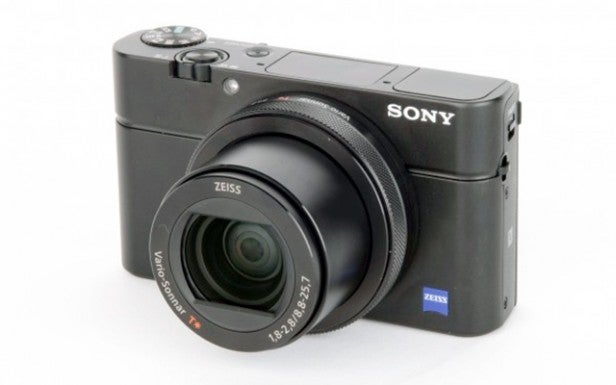 It’s testament to the quality of the Sony RX100-series cameras that “outdated” models from a couple of years ago are still very easy to get hold of, new, today. The success has given Sony enough confidence to keep the RX100 IV looking and feeling pretty much as it did in 2012.

The Sony RX100 IV is a small, magnesium-alloy camera you can easily fit into a trouser pocket. This is at the root of its appeal. It’s a good-looking camera, too, and feels strong enough to withstand a number of years of pretty careless treatment.

What has been traded-away for this size is an obvious handgrip. Where some small cameras try to use an ergonomic moulding to give your fingers something to hold onto, on the Sony RX100 IV you’ll find just smooth, grip-less metal. Great as it feels, it means we’d advise using a wrist-strap to ensure you don’t end up flinging the Sony RX100 IV onto some gravel in the heat of the moment. It’s not cheap, after all. 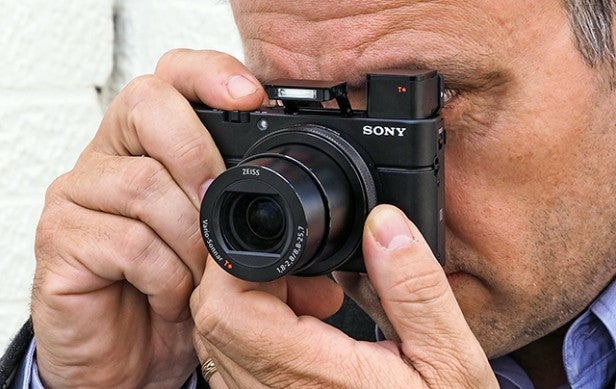 However, you do get some extra grip in the form of a rubberised thumb hold on the back of the camera, providing that extra bit of stability. But the Sony RX100 IV is best handled with extra care.

Tiny stature hasn’t meant Sony has had to leave out all manual controls, though. There’s one manual control dial on the back, and a wheel around the lens. These are the control options we saw in the RX100 III, but this time there’s an embossed diamond texture around the lens ring for extra grip. 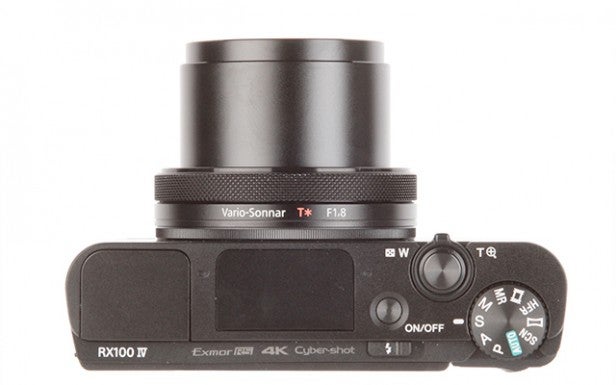 This combo gives you the scope for full-on manual control, although bear in mind that the RX100 IV’s rear controls are pretty small and fiddly. However, this is to be expected in a camera this small, and is true of the RX100 III as well.

The amount of tech Sony has packed into the pocket-sized RX100 IV is impressive. As well as a tilt screen, there’s a fairly high-speed EVF – one offering far greater resolution than last year’s model.

The Sony RX100 IV has a 2.46m-dot EVF that pops out of the top-plate; it lives next to the pop-up flash. This is the default resolution these days for a higher-end EVF, and it packs in far more pixels than the 1.44m-dot EVF used in the RX100 III. 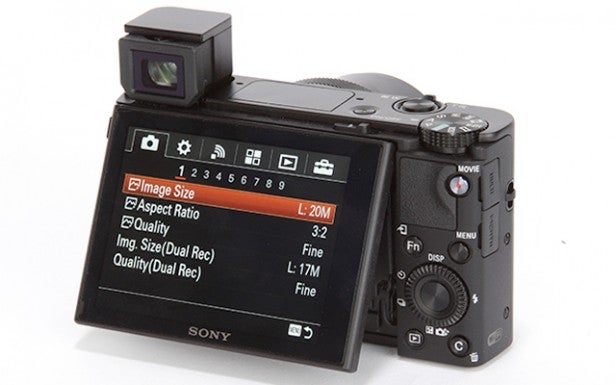 Sure enough, this new version is sharper and clearer. It also makes stabilising the camera against your face easier, letting you use longer exposure times handheld. Like last year, the EVF uses a pop-up and pull-out mechanism to fire-up the EVF. Once pulled out of the top plate, you need to pull the lens out a bit to get it working. It demands some hands-on action, but this is how it has been squeezed into a body quite this small.

There’s less progress in the screen. It’s a perfectly fine 3in 1.23m-dot display with a tilt mechanism – but it’s still missing a touch layer. You need to use the D-pad on the rear to pick a focus point.

Next
Lens, Performance and AF Review