The RX0 II is unusual and impressive in some ways, but it doesn't offer a compelling all-round package for most people. If you want an action camera, then the GoPro Hero7 Black or DJI Osmo Action are better bets. And if you're looking for a tiny vlogging camera, then the DJI Osmo Pocket or a Sony RX100 V are ideal. The RX0 II's electronic image stabilisation isn't great, which means it only really excels on a tripod. If this is the main way you like to shoot, and you're prepared to put up with its foibles, then the RX0 II could be a handy addition to your filmmaking arsenal. But vloggers and travellers should look at its cheaper rivals.

What is the Sony RX0 II?

The Sony RX0 II is one of the strangest cameras that, on the surface, looks completely conventional.

Your first reaction, like mine, will likely be “that’s a Sony GoPro, right?”

This isn’t really the case. While it can perform as an action camera, the Sony RX0 II has the type of one-inch sensor found in the brilliant Sony RX100 compacts. As such, it should blow GoPros out of the water. In practice, if you’re after a “better” GoPro Hero 7 Black then this isn’t it.

Want to know the difference between the RX0 II and original RX0? This newer version has a fold-out screen and can take in-body 4K video, rather than feeding it out of the HDMI port. 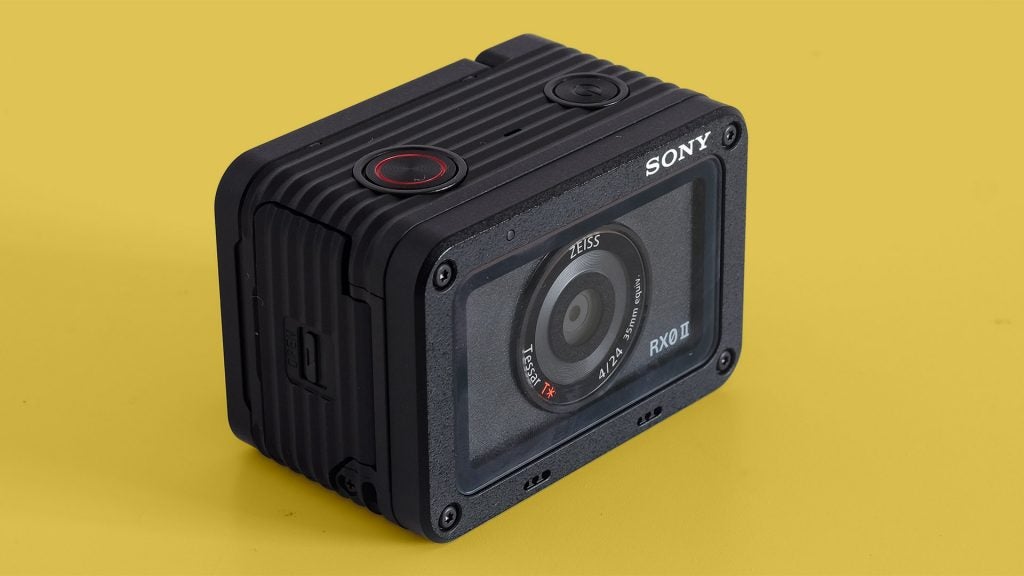 The Sony RX0 II’s shape is that of a typical action camera. It’s a diminutive block, but one that’s a little too thick to fit into most jeans’ pockets.

It’s like a GoPro, but less cute, and made using a wider variety of materials. You’d hope a camera this pricey doesn’t sport a mainly plastic construction; thankfully, this is the case.

The Sony RX0 II’s front covering is toughened glass. Much of its casing is a magnesium alloy, an aluminium-rich one judging by its cool feel.

The rear display’s cover is plastic. There’s presumably a reason for this choice, but it isn’t obvious. 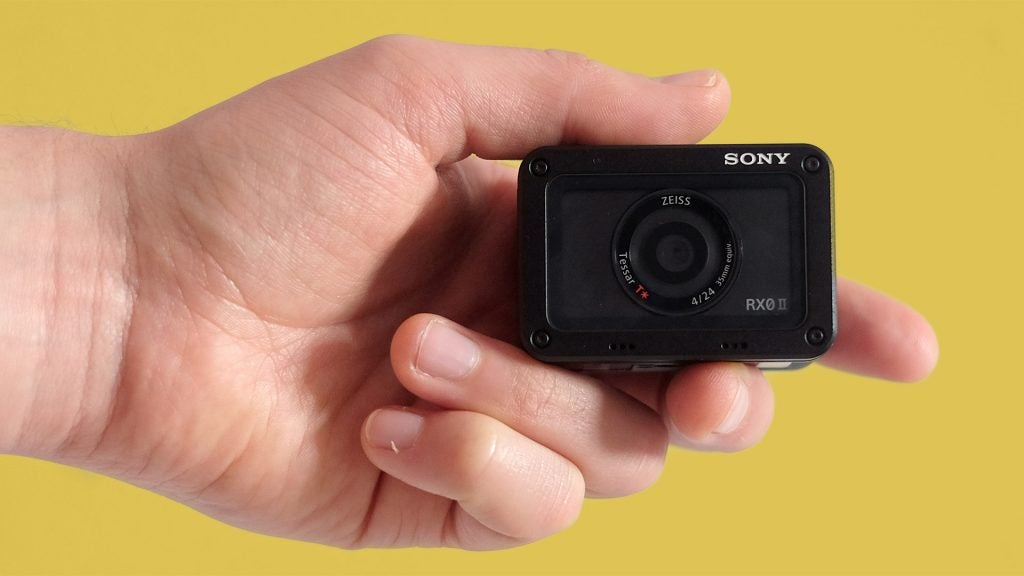 On paper, the Sony RX0 II comes across a luxury, high-end camera. In person, it seems more awkward. There’s a clash of form and function here.

Its rear screen is hemmed-in. Its buttons are small: each has a definite click to it, but the ergonomics are a compromise at best.

The Sony RX0 II does have a superb little feature, one new for this second generation. Its screen flips out on a metal hinge. This isn’t a fully articulated display, but the tilt does let you shoot above and below your eyeline far more easily. Best of all, you can flip it by 180 degrees to let you see your face as you shoot. 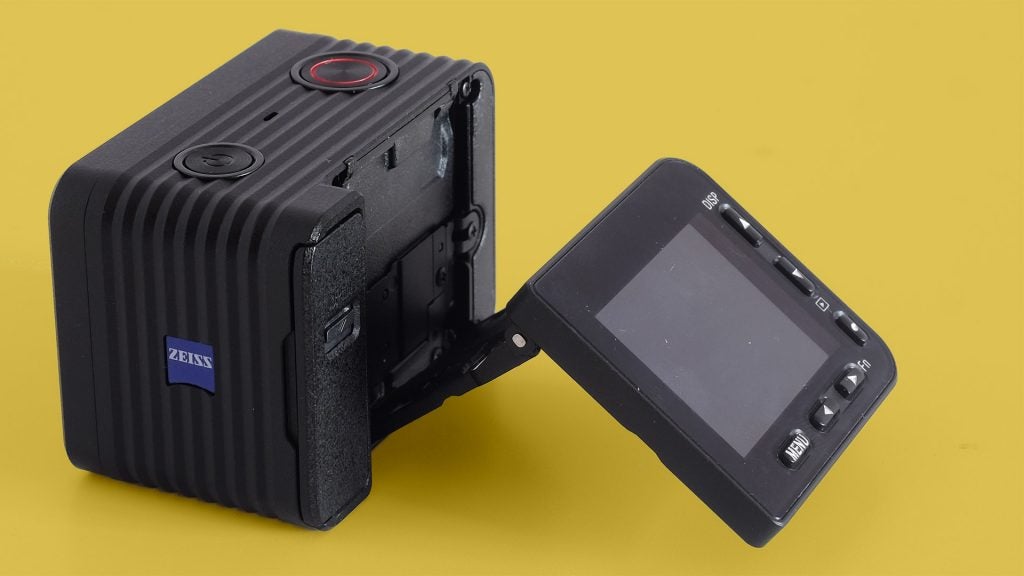 It’s a vlog-composing dream, not least because you can see the rough position of your face in the image in your peripheral vision. This isn’t quite as elegant a solution as the DJI Osmo Action’s front screen, but it does let you do something you can’t do with a GoPro – namely, vlog to camera while framing yourself in the shot.

There are some other advanced-level hardware features. The Sony RX0 II is water-resistant to 10 metres, built to withstand 2-metre drops, and can handle a crushing force of 200kg. In short, its corrugated metal housing is tough.

A micro-HDMI, micro-USB, microSD slot and external mic input sit beneath a weather-sealed flap. The removable battery lives under a second. A 2019 camera should really have a USB-C connector rather than micro-USB – but, ultimately, this isn’t a big issue. 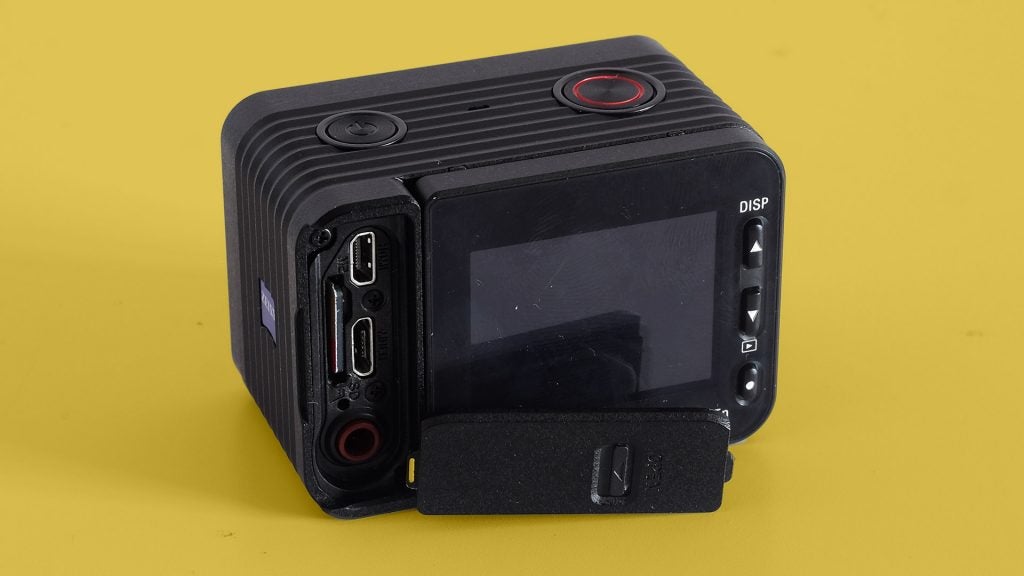 Battery life might be, however. The Sony RX0 II will last an hour – max – between charges. In most scenarios, it will even fail to meet this timespan. Good job you can carry a spare.

Most action cameras are made for easy use. The Sony RX10 II is anything but. It has the menu system of an advanced compact or CSC, with no fewer than 29 pages of settings in its menu system.

It makes a GoPro look remedially simple, but also blissfully quick and easy. The menus are laid out simply enough, but this style works much better in a camera with a larger screen, a greater number of controls and larger buttons. There’s a one-screen summary you can get to by pressing the right arrow button, but it’s still fiddly. 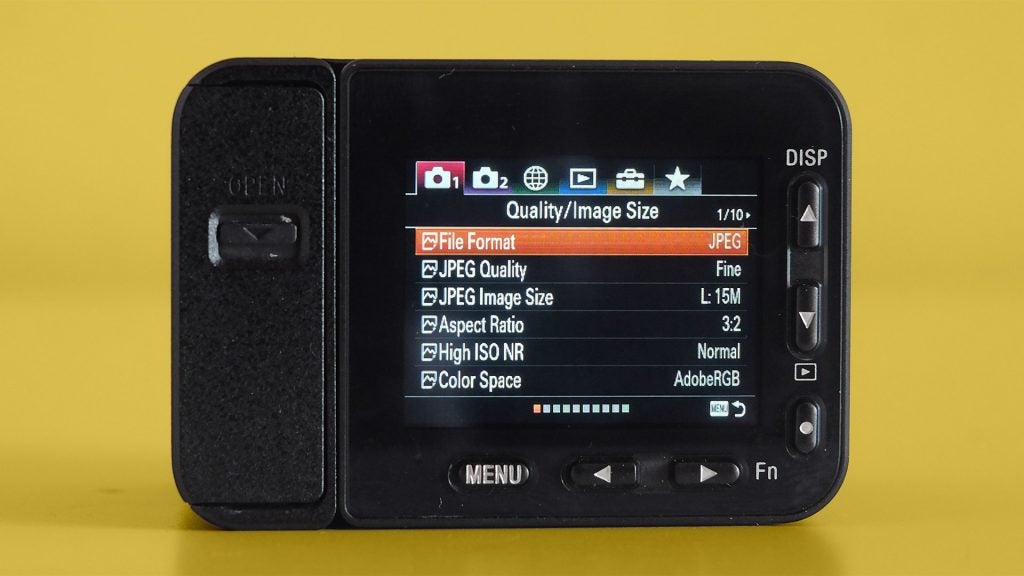 The control is likely unparalleled among action camera-shaped gadgets, though. For example, you can focus manually, choose the colour space (sRGB/Adobe RGB) and enable focus peaking.

It’s an awkward fit. I appreciate extra control in cameras that let you comfortably dig deep into the mechanics of photography, altering aperture and shutter speed on the fly, for example. You can’t alter aperture here, since it’s fixed, but you can control the rest. It just isn’t easy to do so without a manual control dial. 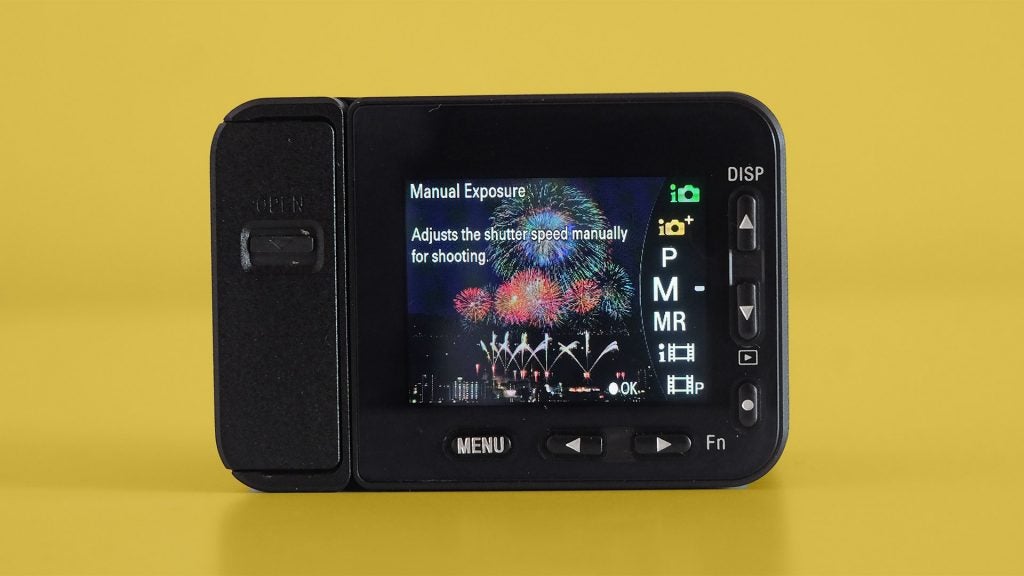 Does this all sound a bit intimidating and/or pointless? Then you’ll appreciate the fact that the Sony RX0 II has a couple of Auto modes that do everything for you.

The Sony RX0 II’s sensor makes it something special. It has a 1-inch, 15.3-megapixel sensor. The GoPro Hero7 Black has a 1/2.3-inch sensor, with roughly a quarter the light-gathering area.

What does this mean in practical terms? Far better low-light performance and greater native dynamic range. And, unlike the original RX0, the Sony RX0 II can shoot 4K video without feeding it through the HDMI output. 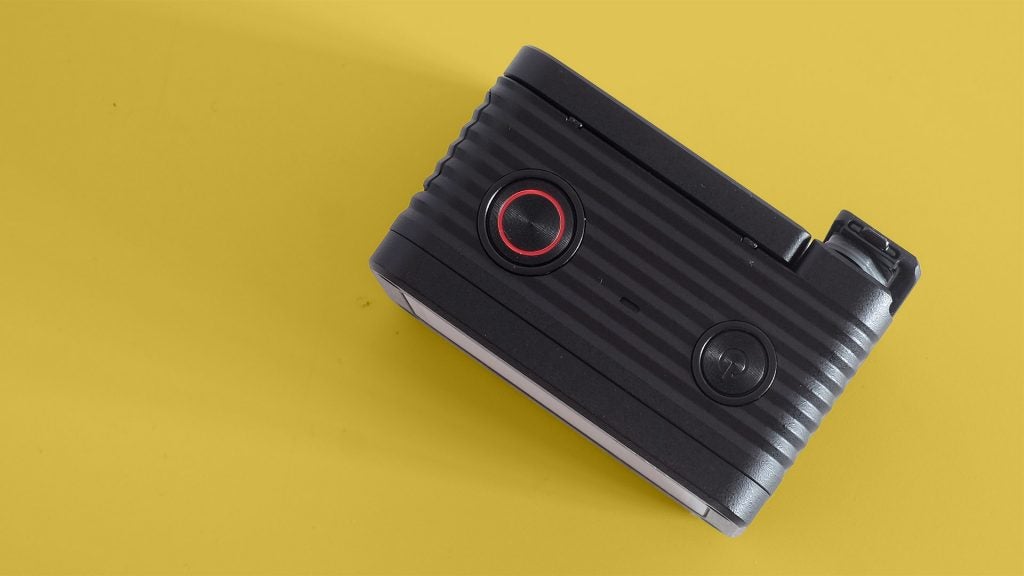 There’s plenty of control over the capture quality. 4K video only goes up to 25 fps, but the max bit rate is a high 100Mbps.

But this camera works much better as a professional tool than an action camera to be used by “normal” people.

Most important, the Sony RX0 II’s stabilisation is poor. The menus suggest it has “SteadyShot” stabilisation, but there’s no sign of it in the footage. It wobbles and jiggles about all over the place. This camera is clearly designed for use with a tripod, not mounted to a bike, chest or dog.

You could apply some stabilisation with plug-in video-editing software (the phone app can add stabilisation, too), but this will eat into the field of view. This is the case with all  forms of software stabilisation.

There are other problems, too. Going through the captured footage frame-by-frame, the Sony RX0 II tends to end up with quite a lot of motion-blurred frames using the Auto mode. This suggests it uses slightly longer exposures than the action cam average, to improve image quality. Unlike most action cameras, though, you can control shooting parameters to avoid this.

In addition, neither is there much cropping room for clever post-processed stabilisation. Popular action cameras such as the GoPro Hero7 Black have a focal length of 17mm (35mm standard equivalent). The Sony RX0 II has a 24mm lens. This is a wide-angle view, but not an ultra-wide one.

Its focus approach is odd as well. Most action cameras have fixed-focus lenses. The Sony RX0 II has autofocus, but you can’t refocus in the middle of shooting a video. This seems a missed opportunity when the shutter button has a two-stage action made for AF control.

Once again, the Sony RX0 II is stuck between the worlds of normal cameras and action cameras.

At its worst, the footage is rendered completely unusable by motion judder. This happens often if you use the RX0 II like an action camera. It sharpness and dynamic range are excellent, but some may find its colour a little too flat. My guess is that this is intended to offer better post-shoot grading potential.

The RX0 II is made for people who know a little about video production, not those who will upload footage directly to YouTube. Like the recent RX100 models, it can also shoot slo-mo footage at up to 960fps, a great feature for well-lit action scenes.

I’ve been a big fan of the Sony RX100 cameras since they launched. A small frame and a relatively large sensor are a great combo. The RX0 II has a 1-inch sensor like those compacts, and it’s tiny.

In daylight, stills are great. Compare them to those of a high-end phone and you’ll see much less processing intervention. It doesn’t combine a small shopping trolley’s worth of images when you press the shutter button, to make up for a sensor with limited native dynamic range.

However, open up even a simple JPEG in Photoshop and you’ll find plenty of very low noise detail to lift out of the shadows following a 10-second edit.

At night you start to see its limits. The Sony RX0 II may have a relatively large sensor, but it doesn’t have optical image stabilisation. The exposure durations you can reliably use handheld are limited.

Max ISO is 12800 – high enough to let the RX0 II take images in very dark conditions and end up with something visible. However, shoot handheld using the Auto mode to let the RX0 II judge sensitivity and exposure, and the photos have a lot of colour noise and are soft. Images taken in very low light don’t look good at all. One-inch sensors are large for compact cameras, but aren’t actually huge.

This isn’t just down to the sensor, the lack of OIS, or a traditional approach to processing; the f/4 lens aperture doesn’t help either. For reference, the very first Sony RX100 – now available for around £250 – has a max lens aperture of f/1.8. It lets in much more light than the RX0 II.

I’d much rather use the RX100 for stills. It’s more comfortable to hold and use, it has a zoom and a control dial. Not a great dial, but it’s something. 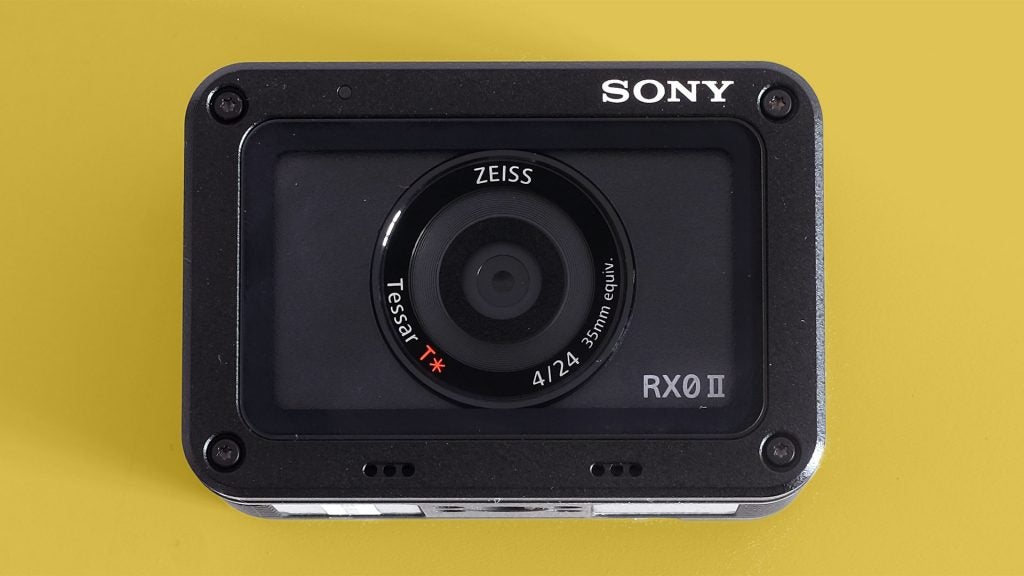 Why buy the Sony RX0 II?

The Sony RX0 II is a bold and very different approach to a tough, tiny camera. It’s so different that you’ll end up wondering whether this is an action camera at all.

It has no optical image stabilisation, and while there’s a SteadyShot software alternative, it barely softens the bumps and jolts of walking. Running and cycling footage is apocalypse-level juddery.

If you want a fancier GoPro, don’t buy a Sony RX0 II. This camera only excels when on a tripod, or at least something flat and solid, to let its 1-inch sensor image quality shine.

The Sony RX0 II may be a good choice for certain filmmakers, but it isn’t for holiday-makers and vloggers who want to work quickly.

The RX0 II is unusual and impressive in some ways, but is unlikely to offer a compelling package for most.