Few other big name manufacturers are continuing to pursue e-ink powered ebook readers, with most giving up the fight in the face of the might of the Amazon Kindle. Sony, however, is still fighting the good fight and its latest model, the Sony Reader Wi-Fi looks like a gem.

Sporting a 6-inch e-ink touchscreen, the Reader Wi-Fi immediately holds an advantage over its dominant competitor – it actually looks nice, particularly in the fetching pink of the model we handled. It’s also incredibly light (168g to the Kindle’s 241g), feels well built and is smaller for the same size screen. 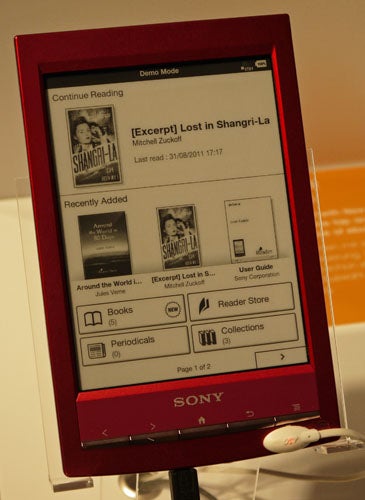 Rather than the mess of a full keyboard under the screen there’s a simple set of five buttons – page turn left and right, home, back and menu – all of which are responsive and conveniently positioned. Meanwhile the bottom edge is home to a standard set of connections with a headphone jack and microUSB socket alongside a power button. So far, so good.

The E-Ink Pearl v220 screen doesn’t set new standards for e-ink displays but is as good as the competition. It sports a typical 16-levels of greyness with a reasonable contrast between the most extreme white and black. The resolution is also a typical 600 x 800 pixels, making for a sufficiently, though not exceptionally sharp display. Its fine for general reading but the smallest fonts can be a bit of a struggle and viewing complicated websites probably won’t be all that fun an experience (the Wi-Fi wasn’t working when we handled it so we couldn’t verify).

Of course the most important things about an E-Ink display is that it’s easy to view in bright light, isn’t reflective and has infinite viewing angles, and the Sony Reader Wi-Fi ticks all these boxes. This is particularly impressive being that Sony has incorporated the touchscreen, as the extra layers often used to enable touch can greatly effect these key abilities of E-Ink. 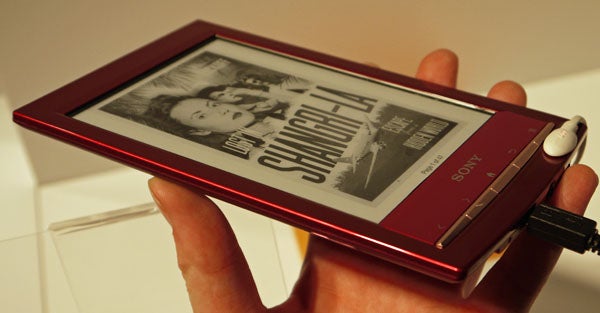 Sony has been able to do this because its touch sensing technology doesn’t actually use an extra layers on the screen but instead works by tracking where your finger interrupts an infra red beam that scans along the surface. Slightly crude though this sounds, it actually works very well, accurately tracking prods and presses and even supporting multi-touch, allowing you to pinch to zoom to increase or decrease font size.

The sow refresh speed of E-Ink means that such gestures can be a bit slow and clunky but they’re certainly not frustratingly so – that’s just the nature of E-Ink. 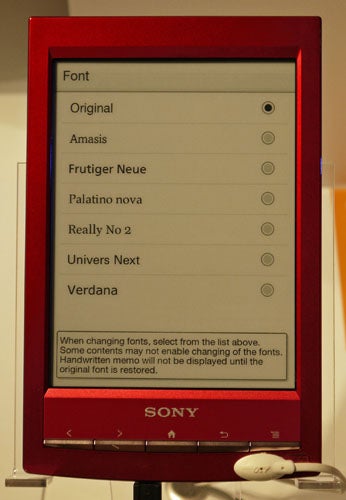 Sony hasn’t gone to town on the interface with it sporting a fairly typical grid-based menu system but, crucially, it’s easy to use – the addition of the ability to change font types is a nice touch though. What really sets this new model apart from its predecessors though is its new Wi-Fi abilities. 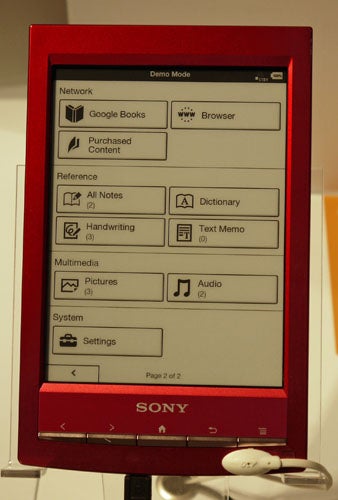 These include being able to buy books through the Sony Reader portal – which is also being opened up for other products to access. You can also look up words on using Google or Wikipedia, and of course there’s a web browser. As we mentioned earlier, though, we had no Wi-Fi connection with which to test this – yes, just a tad ironic. 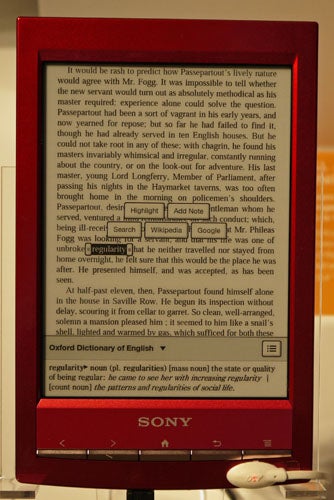 Another bonus, for fans of Harry Potter, is that Sony will be launching some limited edition Harry  Potter versions of the reader with the books preloaded. You will also be able to buy the books yourself from the Pottermore online store. 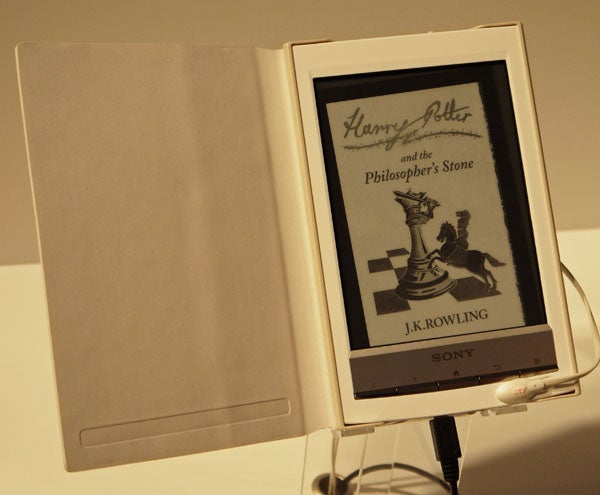 All told, though, the Sony Reader Wi-Fi looks like a solid option if you want to avoid the locked down Amazon Kindle service and want to source books from wherever you like – it’s compatible with all the usual books standards. Moreover, it’s an attractive and well built device, with a reasonable touchscreen interface. Best of all, though, is it’s set to cost around £130, which is a very reasonable price.