The PRS-650 Touch is the current king of Sony’s Reader range. Flying in the face of the super-aggressive pricing of its main rival the Amazon Kindle, this 6in E-ink ereader costs almost £200. It’s not without a few Kindle-beating charms though, not least of which is being a gadget that isn’t as painfully ubiquitous as the Apple iPhone.

The first Sony Reader was the PRS-505, released in 2008, which featured what’s come to be a classic design. At the top of its chart of winning features was a luxurious full-aluminium body. This makes a slight return in the PRS-650, with an aluminium front panel curving around to the seam that connects it to the plastic panel that covers the rest of the back. It’s designed to look like brushed metal, but is soon revealed as an impersonation as it doesn’t have that cool-to-the-touch metallic feel. As well as feeling less premium, plastic tends to prove less durable in the long run too.

With 2GB of on-board storage – enough to hold thousands of books – there’s little need for additional storage if the PRS-650 is used as a pure ebook reader. If you do require more storage, though, there are two card slots are included anyway; the Pro Duo and SD sockets sitting on the top of the device, alongside the power slider and stylus slot.

The two side edges of the PRS-650 have been kept completely clear, improving comfort in-hand. Its left edge is particularly comfy, made of metal and curved to a semi-circle shape that’s perfectly smooth, with a subtle thumb-groove ridge as it curves round to the front of the ereader. In short, it’s dead comfortable to hold given its minimal ergonomic enhancements.

Using a plastic back has allowed the Reader to shave off a few precious grams. At 215g, it’s comfortable to use one-handed for long periods – and is lighter than the all-plastic Kindle, which is 241g in its Wi-Fi only form or 247g for the 3G Wi-Fi edition. The main page navigation buttons on the front are designed for one-handed use, your thumb hovering over them naturally when held by its bottom-left corner. 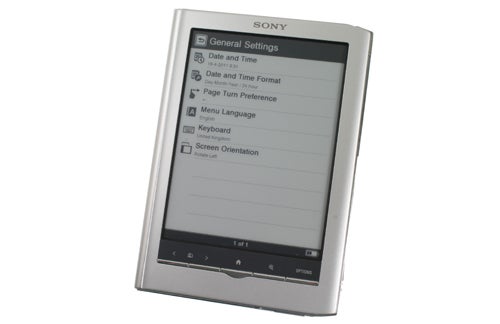 It’s not so well-prepared to be held with your right hand though, lacking the side page controls found on the Kindle and the Sony Reader PRS-505. However, thanks to its touchscreen, this is no big deal. Swipes back and forth over it turn pages just as swiftly as a button press, and while your grip on the PRS-650 is a little less firm when a thumb’s left hovering occasionally over the touchscreen, it’d take a feat of real cack-handedness to drop the thing in normal usage.

The other buttons lined-up on the front of the PRS-650 take you to the reader’s home screen, change front size and pull up the options menu. They’re made from plastic rather than metal but have a firm action with a discernible click. The features you’ll need to use the least are arranged on the bottom – volume control, 3.5mm headphone jack and the microUSB slot.

Part of us longs for the shiny plastic bits of the reader – the strip that runs along three of its edges and those front buttons – to be made of metal, but after the lust for luxury died down we became more appreciative of its light weight. Other ereaders have been lighter, like the Cool-er and Foxit Slick, but they haven’t matched the solidity of the Sony PRS-650.  You may want an ebook reader to be as light as possible, but it also needs to be able to suck up some punishment to survive years of being carried around in a bag, replacing a succession of paperbacks.

One of the main reasons for the existence of the Sony Reader PRS-650 Touch is the screen issues its predecessor, the PRS-600, suffered from. It used a resistive touchscreen, which requires an extra layer of plastic to be laid upon the E-ink screen. This increased reflections, reduced the vividness of the display and essentially robbed the underlying E-ink screen of its key benefits.

The PRS-650 uses a completely different kind of touchscreen, one that doesn’t require an extra layer of plastic on top of all that lovely E-ink. Instead, it uses light sources firing over the surface of the screen to tell when there’s something touching – or just over – it. This tech means it works as well with a finger as the stylus. 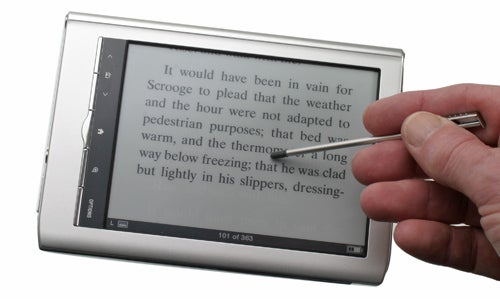 When matched with a high-quality Pearl E-ink screen, the result in the 6in PRS-650 is exceedingly clear, high-contrast text. Sharpness is slightly better on the smaller PRS-350, which uses the same screen resolution of 600×800 pixels but in a smaller space, but the reading experience here is still exemplary.

The glare issues inherent in the PRS-600 are gone, while contrast and sharpness have improved significantly since the days of the PRS-505. Like the Kindle 3, it offers 16 levels of contrast (effectively 16 shades of grey).

Like all E-ink devices, there’s a slight lag between page turns, but it’s a lot quicker than older-generation ereaders. It’s between a third of and half a second, and whether it’ll irritate or impress you will depend on whether you’re an E-ink virgin or not. For an E-ink ereader it’s fast, but is slower than LCD devices like the iPad.

It’s part of the learning curve when using E-ink, but worth it for the significant benefits – primarily the paper-like display. We did notice some minor ghosting, where part of a previous screen’s image is visible, but this is generally sorted with a screen refresh.

The reading basics are spot-on, but there are neat extras that take the PRS-650 beyond the simple book experience. Whip out the stylus from the right edge of the device, double tap on a word and its dictionary entry will pop up at the bottom of the screen. The full Oxford Dictionary of English is built into the reader, along with 11 others including translation dictionaries between English, German, Spanish, Italian and Netherlands. This functionality is brilliant, especially if your reading tastes extend beyond Dan Brown and J. K. Rowling – it’s also the best use the PRS-650 has for the touchscreen.

Some customisation of how the text looks is available too. There are six text sizes on offer – the largest will probably only be of interest to those with sight issues and the resolution isn’t high enough to render text properly at the smallest, but it certainly covers all the bases. Contrast and Brightness controls are available, but without a backlight to control you can effectively only make the text less black, or the background greyer. Most will be happiest with the default setting. We were.

Until E-ink technology loses its laggy refresh rates, or a replacement tech starts being used, browsing through an ebook library is never going to be fun with a dedicated ereader. It’s too slow, and much too cumbersome – true of all these devices including the PRS-650 and Amazon Kindle.

However, Sony has done its best with the technology’s limitations and come up with a clean-looking and intuitive interface. From the home screen – always quickly accessible thanks to the front Home button – a third of the screen is taken up by the “continue reading” option. As this is by far the option you’ll tap the most, this is a good design choice. 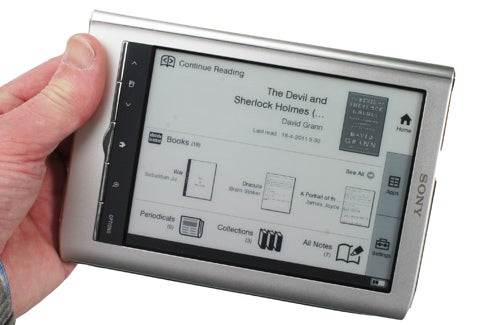 Underneath this are links to your books library, collections, notes, periodicals and tabs for applications and settings. Skipping into the books library – another very important piece of the UI puzzle – you can order your books in a handful of ways, and choose to see book covers or just the basic info. The slow screen response of E-ink stops the prettier graphical style from being practical though. You can’t fit anywhere near as many book entries on-screen at once, and frustration soon sets in.

Switch to the more economical list option and the PRS-650 fares much better. It’s still slow, but with a search function in tow you’ll be able to find books within a few taps. With ebook readers like this, the less time you have to spend within the interface, the better. If you’re willing to trade short-term frustration for longer-term ease of use, you can sort your books into collections too, accessible from the home screen.

In the spirit of convergence that devices like smartphones have forcibly encouraged on other kinds of tech, the Sony PRS-650 offers a few secondary functions. The ability to scrawl notes on your books is great, but the additional free-form doodling app is there for a bit of fun. The E-ink’s refresh delay means lines you draw have to very noticeably catch up with the stylus, and it’s all black and white. It’s no replacement for the snazzy iPhone and iPad art apps available, but it’s enjoyable for a quick scrawl. 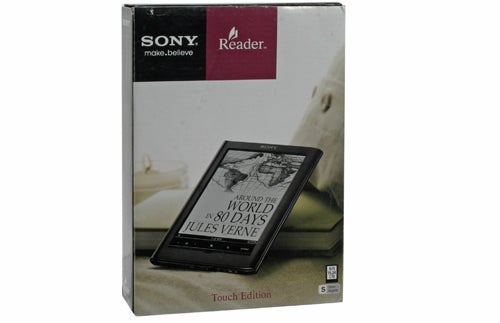 Another support act feature of the PRS-650 is its music-playing abilities. Justifying the dual memory card slots, the reader can play AAC and MP3 files. The size and slow navigation of the device make it a poor replacement for a dedicated MP3 player though – even budget phones are more capable in this area. Playing music will also quickly eat into the claimed 2-week battery life – actual battery performance in real-world conditions is completely dependent on use (number of page turns), especially as there are no 3G or Wi-Fi connectivity options here to suck up juice.

The Sony Reader PRS-650 is on-par with the very best dedicated ereaders in terms of the reading experience it offers, but it’s also one of the most expensive. The Kindle is the best part of a hundred pounds cheaper, and we don’t think the smaller, more affordable PRS-350 is any worse an ereader.

The PRS-650 is a king among ereaders, but it also comes with a royal price tag. If you can stomach the extra expenditure though, its screen is top-notch, not dulled at all by the addition of touchscreen tech. Light, comfortable-to-hold and at least as tough as the competition, it’s worth keeping as a constant literary companion.