It must have been CES 2007 that I first played with the Sony eBook reader. I remember spending far too much time fondling and playing with the device on the Sony stand, when I really should have been traipsing the show floor looking for scoops. But even more vividly do I remember coming back home and requesting a sample from Sony, only to be told that there were no plans to launch the device in the UK. I was therefore surprised, but very pleased in July when Sony announced that it would be launching its latest eBook reader this side of the pond.


One thing’s instantly apparent when you take the Sony Reader from its box – the Japanese giant has hit the bull’s eye when it comes to design. The Sony Reader looks fantastic, with the kind of minimalist style that wouldn’t be out of place in a Terence Conran design studio. The Reader itself is finished in matte silver, with contrasting darker silver buttons and controls. At first glance, it looks like there are far too many buttons squeezed into the reader, but once you start using it, you’ll realise that the controls are just about perfect. 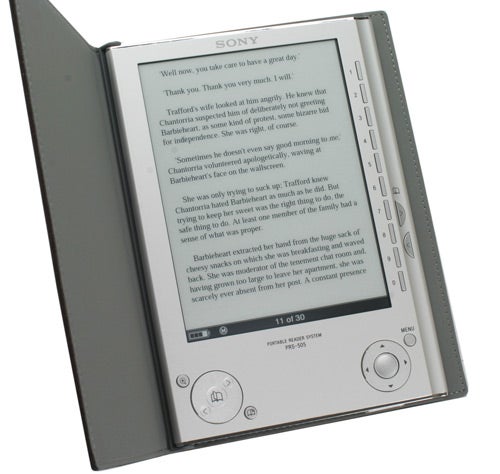 With dimensions of 175 x 122 x 7.6mm (HxWxD), the Reader is very slim, and even when shrouded in its protective case it’s only the size of a slim notepad. Although the case, which resembles a book sleeve, isn’t made from genuine leather, it has a quality feel to it. Sony has also thought hard about the usability of the Reader while in its sleeve, making sure that the device can be easily read when placed on a desk or table, without having to remove it from its sheath. 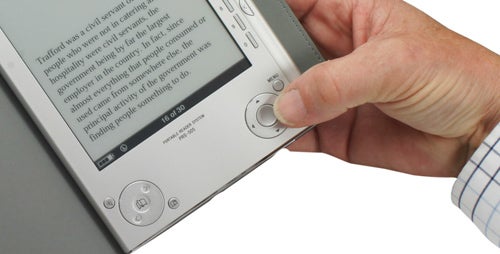 Of course the highlight of the Reader is the 6in screen, which you’ll be spending a great deal of time looking at. At this point I should probably point out that anyone who prefers reading ink on paper, to reading text on a screen should not just dismiss the Sony Reader; in fact you’re in for something of a revelation. You see the screen on the Reader isn’t a standard LCD, like you’d find on most mobile devices. No, what you’ve got here is the Holy Grail of electronic literature – digital ink on digital paper. If you think that I’m just spouting Sony’s marketing line, believe me when I say that this device has to be seen to be believed.

Unlike an LCD screen, the display on the Reader is designed only to display a static image, much like a piece of paper. Also unlike an LCD, the screen isn’t constantly drawing power in order to keep an image in place, instead power is used to draw the page, then it remains on the screen passively. But it’s not just the power efficiency that makes this screen great, it’s the quality of it. What you have is a screen that displays text like ink on paper – it’s perfectly readable no matter how acute the viewing angle, and the brighter the ambient light, the easier it is to read. So, if you like reading in the park with the sun shining down (unusual in the UK I know), the Sony Reader will be a good companion. 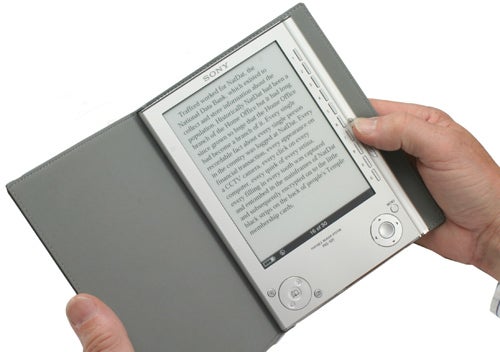 So, there’s no denying that Sony has got the important screen quality part of the equation right, but how does the rest of the package measure up? Very well actually – in fact I’d be very surprised if the Sony Reader doesn’t make it onto the short list for the Best Design of 2008 in our end of year awards. Running down the right hand side of the screen are ten buttons numbered from 0-9. Not only are these buttons used for selecting options on corresponding lines in the Reader menus, but when reading a book, you can use them to jump to specific pages in the volume. To the right of the number buttons, located on the bevelled edge of the device are two buttons which will turn the pages in a book forwards or backwards. 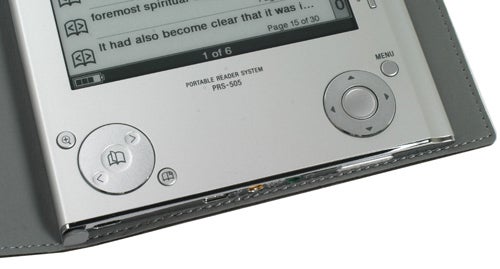 There are more controls below the screen. On the left is another set of page turning buttons mounted on a circular rocker. There’s also a bookmark page, which actually turns down the corner of the page – although being digital, it doesn’t ruin the paper! Here you’ll also find a Zoom button, which will increase the font size of the text and consequently the number of pages in your book. On the right is a Menu button that, unsurprisingly brings up menu options, and will also jump back menu levels if pressed multiple times. Finally there’s a four-way rocker, with a central selector button – this can be used to navigate through menus if you don’t want to use the number buttons down the right of the screen.

The top edge of the Reader is populated by the sliding power switch and both MemoryStick and SD Card slots. It’s good to see that Sony has accepted that consumers won’t be forced into adopting MemoryStick, and now offers options for other formats like SD. Of course you don’t need a memory card in order to use the reader, since it has 192MB of memory built in, and although that may seem like a woefully small amount of storage by today’s standards, that’s enough to accommodate around 160 books! With that in mind, you could slap a 16GB MemoryStick or SD Card in and basically carry an entire library around with you.

Along the bottom edge is a mini-USB port for hooking the Reader up to your computer and charging the device. There’s also a 5.2V DC input, in case you want to charge direct from the mains, although there’s no mains charger in the box. Finally along the bottom you’ll find a headphone socket and volume control, which gives away the fact that the Reader can also be used as a music player. Obviously as portable music players go, it’s pretty big, but if you like having some background music while you read, it’s a nice feature to have.


In the box is a disc with Sony’s eBook Library software on it. This operates in a very similar manner to music management software like iTunes – in the far left column you’ll find links to your Reader, your Library and the eBook store. For the latter Sony has partnered with Waterstones, which is probably the most recognised high street book shop in the UK. Unfortunately, since the Sony Reader hasn’t actually gone on sale yet, Waterstones hasn’t launched its eBook store yet, which means that I couldn’t test the service out.

Luckily Sony also throws in a CD with 100 books on it. Of course these books are old and therefore out of copyright, but if you haven’t taken time to read some of the classics, this is the perfect opportunity, and it won’t cost you a penny (apart from the cost of the Reader of course). There is some truly cracking stuff on the CD, from the likes of Jules Vern, Alexandre Dumas, Charles Dickens and Jane Austen, to name but a few. In fact, during the process of testing, I’ve found myself engrossed in both Great Expectations (my favourite Dickens) and Emma – yes, I have a soft spot for Jane Austen’s storytelling, it’s not a crime.

Getting the books onto the Reader isn’t quite as simple as it could be. Despite the instructions on the supplied CD stating that books can simply be dragged and dropped onto the eBook Library application, it’s not quite as easy as that. Strangely, you can’t drag and drop files directly to the library window, instead you have to drag them to the Library tab in the left column, or directly to the Reader tab. This isn’t too much of a hassle once you’re aware of it, but I fail to see why items couldn’t be dragged to the main window. The Sony Reader can also display PDF files, which is pretty useful in my line of work, and no doubt many others.

The Sony Reader is launching with a price of £199, which is pretty reasonable when you consider that the last really good eBook reader we reviewed – the Bookeen Cybook – cost over £100 more. Sony has a more complete package too – whereas the wallet spoiled the aesthetic appeal of the Cybook, it enhances the Sony device. that said, it’s still a shame that there’s no mains adapter in the box, while the docking cradle connector that was seen on the original Sony Reader PRS-500 is also conspicuous by its absence.

The appeal of an eBook reader is very personal though, and at no point would I suggest that devices like this will make printed books obsolete. What it does do though, is give you the ability to carry a library of books around with you, allowing you unprecedented choice at all times. The last time I went backpacking for over a year I spent a lot of money on books and ended up just dumping them in hostels when I’d finished them, since I had no desire to carry heavy books around on my back all day. If I’d had a device like this back then, I could have taken a whole raft of books away with me and read them at my leisure, without any worry of the amount of space they’d take up, or how heavy they were. And that, as they say in the technology world, is progress.


The eBook revolution won’t be for everyone, but if you’re willing to give digital books a try, the Sony Reader is well worth investing in. The screen on this device is nothing short of staggering, and with 6,800 page turns between battery charges, you won’t have to worry about running out of juice halfway through War and Peace. The Sony Reader is beautiful to look at, a joy to handle and incredibly easy to use. If anything can usher in the digital age of literature, this can.