A ridiculous number of accessories are available for Apple devices. If you have an old iPhone 3G, you’ll have no trouble finding an array of compatible docks, cases, covers and speakers. No so with another three year-old phone like the HTC Treo Pro. Even with this wealth of iPhone options, the Sony RDP-M15iP is a little out of the ordinary. It’s a fairly big iPhone dock that comes with a great big battery to let you use it out and about for long periods.

The Sony RDP-M15iP is an odd clash of ideas. Its 35cm width and inclusion of two drivers for proper stereo imaging suggests it’s a full size home dock, but it’s actually something else. It has been designed with portability in mind, as it’s surprisingly compact and has a built-in rechargeable battery that lasts for up to 6 hours.

Aside from the battery pack, two retractable elements make this dock really work as a portable solution. A back stabiliser folds back into the RDP-M15iP’s body and the dock mechanism can be pushed back into the body with the aid of a button on its front. It retracts back in with a silky smooth motion that’s pure Sony – dead stylish.

With these two elements put away, the RDP-M15iP is a solid rectangular bar of metal and plastic that’ll fit very happily into a bag. It’s not small but is rucksack-friendly. A fabric case – like a black drawstring Christmas stocking – is included in the box to avoid scratches. The front speaker grille is metal, the rest of the body plastic, and it’s hardy enough to endure a life of occasional bumps and scrapes. 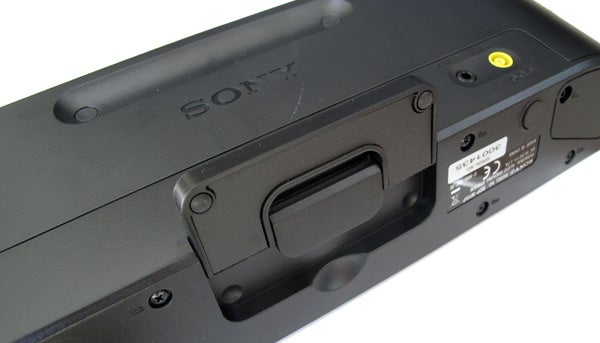 There’s a standard AC socket to charge the battery or use this gadget as a home dock, and the only other port is a 3.5mm auxiliary input alongside it. This lets you input other sources, such as a smartphone via the headphone output or, if you want to go retro, a discman.

A simple remote control is included, letting you navigate through an iPod’s music library, change tracks and alter volume, but there are on-body controls available too. Buttons along the top of the RDP-M15iP turn the dock on and off, play/pause, alter volume and select from the three main sound settings – which can be roughly described as “normal”, “extra bassy” and “extra trebly”.

It’s a slightly perfunctory-looking dock, but you start to appreciate its simple look once you consider how much a benefit this is to its portability. Any frills to deviate from its slanted rectangular blockiness might also reduce its strength.

The Sony RDP-M15iP does offer one extra bit of functionality though – you can swivel the iPhone dock arm so that it sits in landscape orientation. This comes in very handy for watching movies on that iPhone diddy screen, or if you want to use the dock as a sort of alarm clock.

Just as it is a bit of a half-way house in design terms, the Sony RDP-M15iP is also a mixed bag sonically. The dual drivers give the dock a decent sense of scale and decent volume for a battery-powered device. As is common with smaller docks, the sound becomes slightly strained at high volumes, but this can be compensated-for somewhat with the on-box sound settings.

There are three sound modes available here, selected using a button on the top. The standard flat frequency response mode is on by default, but presses on this button activate the bassier and more high-end focused modes. You can tell which mode is on by the indicator light on the button. An orange light denotes the bassy mode and a green one the treble setting. 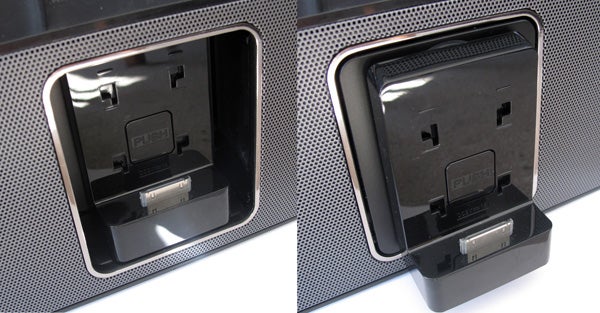 The treble mode gets a bit brash-sounding at high volume, but gives the most detailed listen at lower volumes. The orange mode, by contrast, is immediately the most exciting and the go-to pick for parties and barbeques, beefing-up the sound with an extra portion of bass and low-end warmth. Using this mode, the bass response is very good for a 5cm-thick dock – it may be long, but the RDP-M15iP is pretty thin. 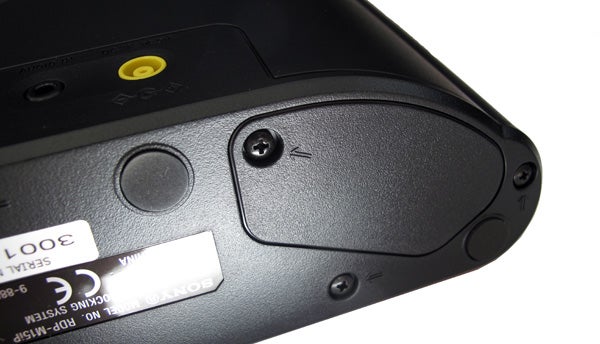 It lacks high-end fidelity though. Decent home docks in the £100-150 price, like the JBL OnBeat, offer enough high-end detail and insight to give a near-audiophile sound at low volumes. The Sony RDP-M15iP, though, sounds much less refined, left with a comparatively “2D” representation of music. This is one of the key differences between low-end and mid-range audio tech – the added dynamics and sonic sophistication is rather like adding another spatial dimension to the sound, and you’re stuck in 2D territory here.

If you need a home dock and nothing more, you’d be better off with something other than the Sony RDP-M15iP. The wireless, and rather charming, Roth Charlie 2.0 is available for as little as £40 and provides better sound quality, as does the £100 Klipsch iGroove. We’re loath to forget the internal battery of the Sony though, since it’s a very handy feature for a dock of this size – one that’s also capable of blasting out music at a decent volume. If you’re going to spend most of the time running the speaker off its battery rather than the AC adaptor though, it’s a handy, relatively-high quality portable solution.

With a clever design and decent built-in battery, the Sony RDP-M15iP is the perfect device to take out to a park with friends, or perhaps on a camping holiday. If the battery doesn’t mean everything to you though, better sound quality is available for the same price. It’ll pump out tunes at a decent volume and has good bass presence for its size, but lacks musicality and detail.