The Sony Pulse 3D headset is a brilliant peripheral I can easily recommend to any owner of the PS5. It sounds, looks and feels great, while boasting features such as 3D audio and internal dual microphones which make it feel wonderfully innovative for the price.

The Sony Pulse 3D Headset follows the same design trend as the PS5 that it companions, abandoning conventions that the PlayStation brand has held dear for decades while bragging immersive technology not seen with its competition.

The new headset offers an excellent audio performance alongside a design profile that sits beautifully alongside the console itself. It’s affordable, accessible and surprisingly competent, even when compared to its more expensive rivals.

While the build quality retains the garish plastic of its predecessor, those looking for a cheap yet capable headset should definitely consider this peripheral. It looks great, sounds even better and is poised to take distinct advantage of future first-party exclusives with the use of spatial 3D audio. Much like its PS4 predecessors, Sony has knocked it out of the park with this headset.

The Sony Pulse 3D Headset retails for £89.99/$99.99/€99, although is currently experiencing stock fluctuations due to sheer demand. We imagine this will return to normality in the coming months, but consumers may have to resort to third-party sellers right now. 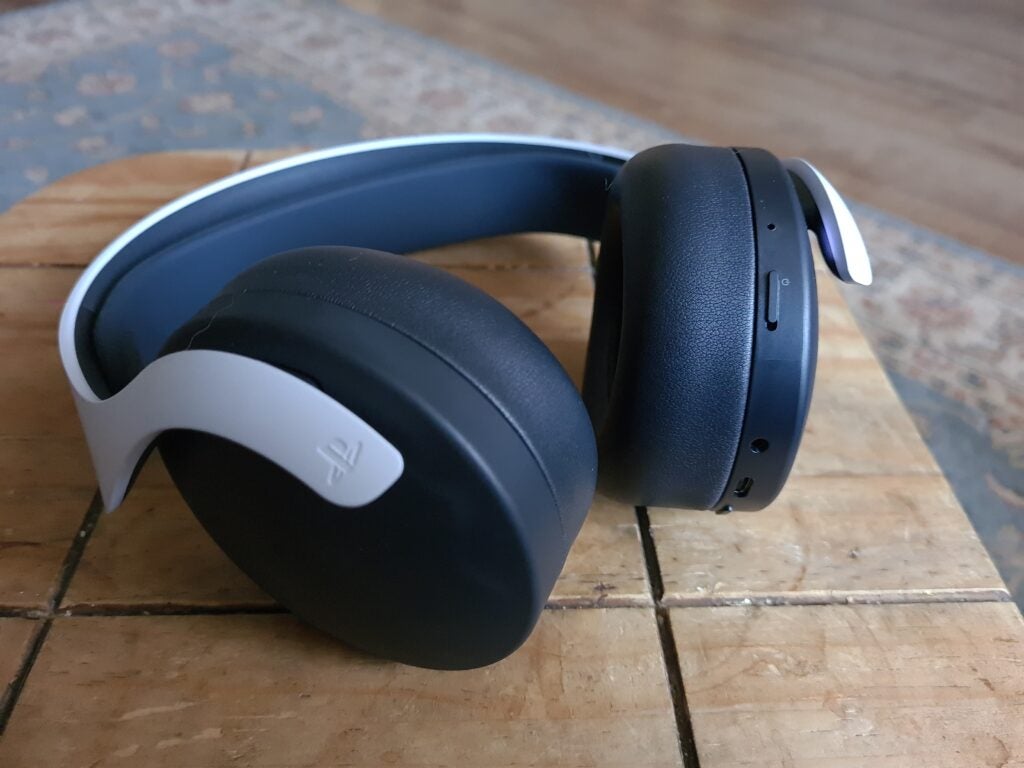 I have reservations with some aspects of the Sony Pulse 3D Headset’s overall design, but I can’t deny the immediately striking impression it left upon me. Sony has crafted a peripheral that sits perfectly alongside its new console, and is also engineered to take direct advantage of it from a technological perspective.

The headset itself is a gorgeous mixture of black and white, sporting the same two-tone approach to colour as the console itself. The headband is made of a solid piece of black matte plastic, with a softer, more flexible white rest sitting beneath it. As a result the headset is supremely comfortable to wear for extended play sessions.

This feeling is further reinforced by ear cups which hug against your head with only the smallest amount of pressure. As someone who wears glasses while gaming, it did prove somewhat irritable after 5+ hours with a game, but that’s likely my fault for not taking some form of break while binging Final Fantasy XIV. Compared to other devices I’ve tested, the Pulse 3D feels both lightweight and durable in the best possible way.

But don’t purchase this headset expecting the premium build quality found in more expensive rivals. Retailing for £89.99, Sony clearly intends for this to be a product accessible for both casual and hardcore players alike, with cost-cutting evident in the plastic build quality – there’s no metal design here. 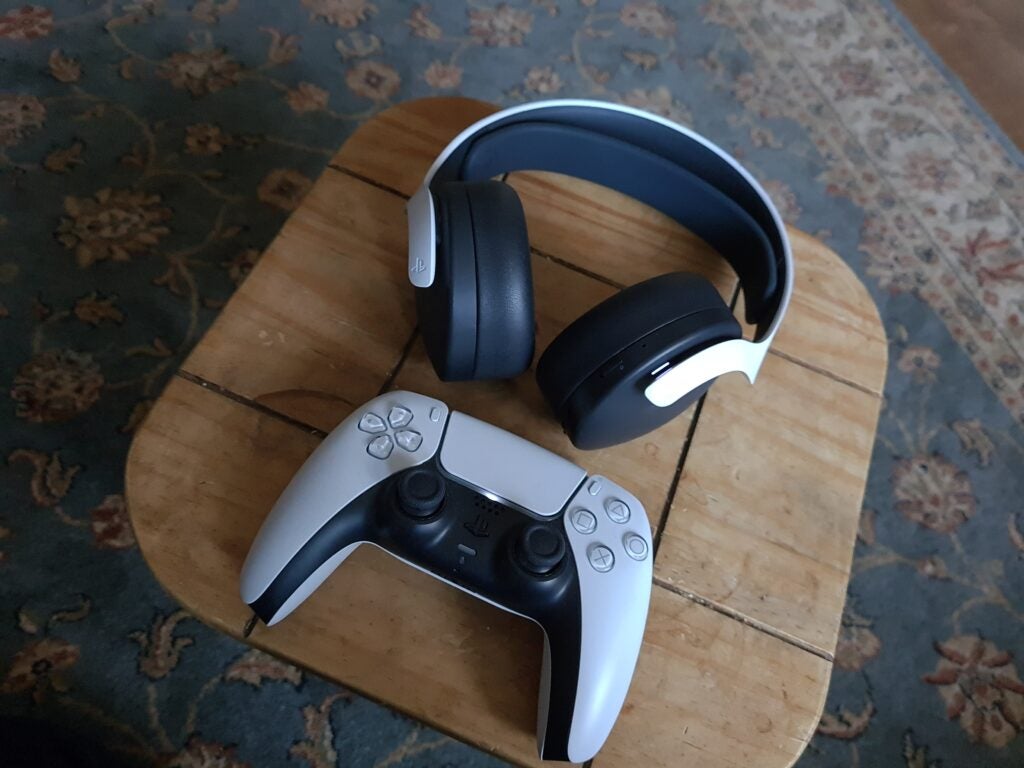 The headset sits alongside the console and DualSense controller beautifully, and doesn’t overextend itself to be something adorned with garish, unnecessary features. The Pulse 3D comes with an angular dongle which can be seamlessly inserted into your console to connect within seconds. It also works brilliantly with a PC, quickly becoming my ideal headset when working from home and taking part in Zoom calls. The microphone is built directly into the device, so there’s no need to clumsily attach an optional mic when the moment requires it.

In terms of inputs and buttons, the right earcup is completely bare, with everything being stuffed on the opposing side. I imagine this is because of where much of the hardware is situated, but I will admit that things can feel somewhat overcrowded as a result. It’s easy to become confused when seeking out the mute button or volume control with just a blind touch, meaning I often found myself taking the headset off completely to adjust the settings.

On the left cup you’ll find volume control, USB-C charging port, a power slider and mute button. There’s also a 3.5mm jack for enabling a wired connection, which can be achieved with a cable included in the box. An additional toggle for adjusting the audio balance between in-game volume and multiplayer chat is also included. 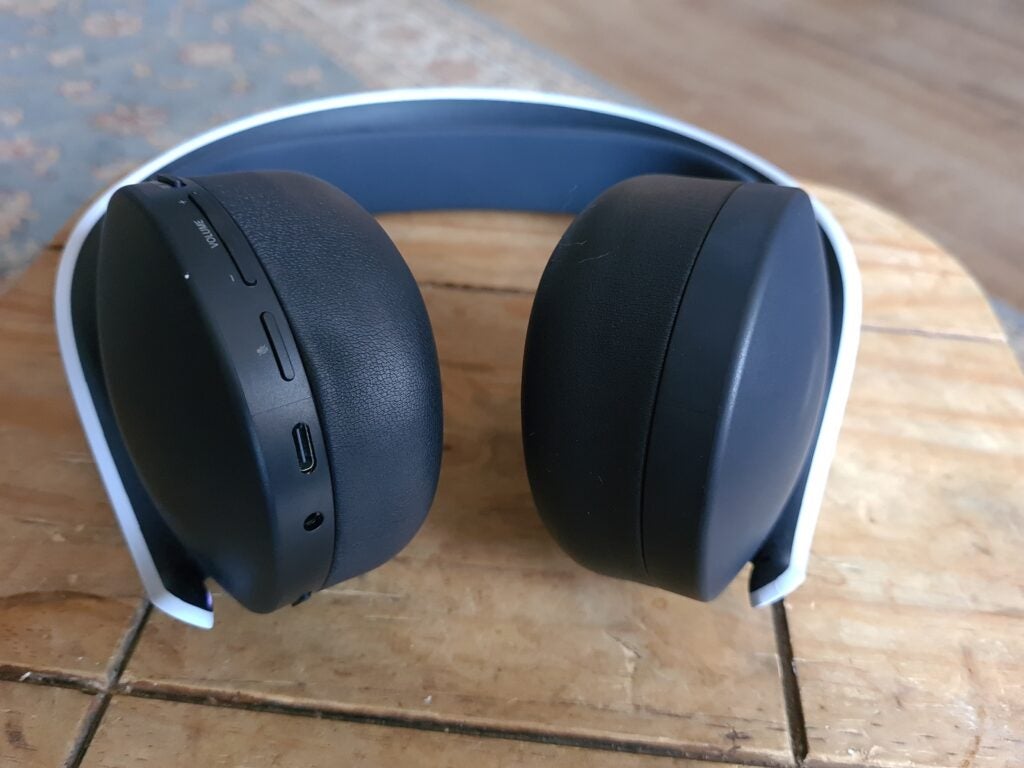 I was genuinely surprised by how quickly the Pulse 3D Headset became my primary driver when playing games. I quickly abandoned more expensive, experienced devices in favour of what that was simply more intuitive to use in most situations. Obviously I couldn’t use this headset with the Xbox Series X (because of the lack of Bluetooth) but it was seamless across PS5 and PC when it came to playing games and chatting with friends on party chat or Discord.

One of the headline features of Sony’s new console is the implementation of 3D Audio. In concept, it aims to make your gaming experience more immersive by honing in on the directional qualities of different sounds to make it feel like you are truly part of the environment you’re exploring. It works wonderfully in most cases, although the overall audio quality does suffer somewhat for the novelty.

Demon’s Souls is one of the finest examples, with the otherworldly growls of goblins in the mines ringing out amidst the hollow shafts, while absorbing souls upon downing enemies is expressed with the feeling of a door slamming right before you. I had to take my headphones and check whether something had happened in the real world a few times, truly emphasising how impressive 3D Audio can be at times. 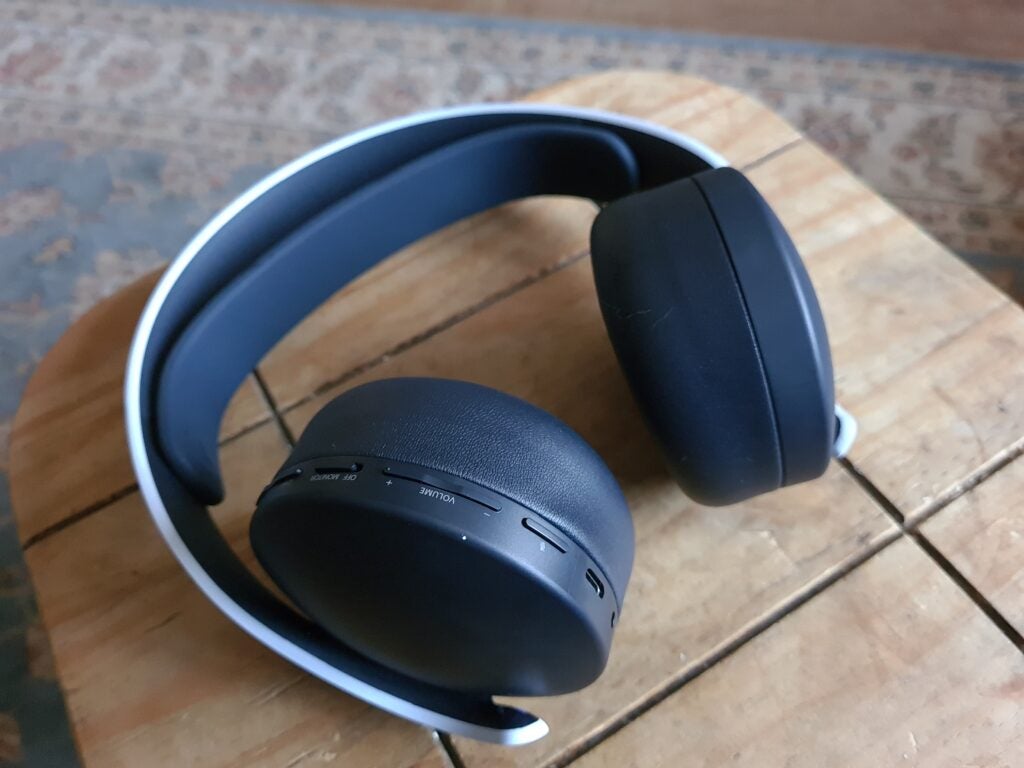 First-party exclusives benefit from 3D Audio, with developers ensuring that titles like Demon’s Souls, Sackboy: A Big Adventure and Miles Morales take true advantage of the next-gen hardware, although the feature won’t be used so extensively by third-party developers which limits its use.

Similar 3D Audio effects can be found in the majority of modern gaming headsets, but it shines far brighter in official hands. It’s not a feature everyone will use all the time, but it adds an extra layer of immersion that is undoubtedly worth having.

As for the audio itself, I found it to be sufficiently punchy, if a little unclean in busy scenarios when compared to more expensive peripherals. That being said, it is astounding for the price. It produces a punchy, loud and thoroughly enjoyable sound profile that really shines regardless of the genre you’re diving into.

The microphone isn’t high calibre, but has proved adequate when playing games with friends and partaking in zoom calls. Well, I’ve never had complaints yet and my voice came across as clear and distinct when listening back to a number of recordings.

The microphone is built inside the headset itself, which I found to incredibly convenient as you don’t have a waggling stick hovering by your mouth. The downside of not having a detachable microphone is that you can’t replace it with a superior version, but most PS5 users should be more than fine with the quality here.