It is becoming increasingly hard for us, when looking at new products, to focus just on the product itself. Whether it’s an iPhone 4 a TomTom or even a Kindle what’s starting to matter as much as, if not arguably more than, the device itself is the ecosystem surrounding it.


Take the iPhone; criticise iTunes all you want – we certainly have in the past – it’s hard to deny that for the casual user, who is happy to work with their music collection as iTunes asks of them, it makes purchasing music and loading it onto your phone an almost criminally easy process. Similarly the Kindle isn’t anything special hardware-wise; but Amazon’s two-pronged attack with its Whispernet service and an extremely comprehensive (and well priced!) eBook store turns the Kindle from an average eBook reader into a great one.


You might wonder if there’s a point to this pre-amble. Well, here it is: having great hardware isn’t necessarily enough any more. Gone are the days when you could ship a great product and let it speak for itself; consumers expect and deserve more. And this is what makes the Sony Pocket Reader PRS-350 such a disappointment.


There’s no denying that Sony knows how to put together a lovely eBook reader; both the original PRS-505 and the later PRS-600 readers were lauded in these pages as the pinnacle of the eBook reader market. 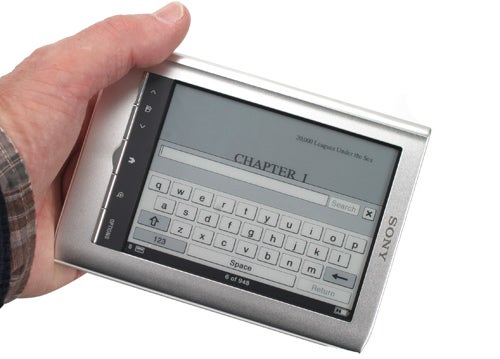 But that was then, and this is now. And now competition is fiercer; in a world inhabited by the Kindle Sony needed to do better than Amazon. Unfortunately, it’s merely done better than its own previous effort. Given the higher pricing of the Sony Readers than their Kindle rival, that might pose something of a problem. The Pocket Reader is, after all, some £50 more expensive than the Kindle, at £129 (via Waterstones, other retainers seem to be sticking to the £159 MSRP) versus £109 – and that’s a difference worth considering.


In the Pocket Reader’s favour is its industrial design. Measuring 104.3mm x 145mm x 8.5mm and weighing 155g the Pocket Reader definitely lives up to its name and will nestle inside most pockets. Although you’ll want to keep the device out of any pocket its likely to be sat on inside of, as it won’t take too kindly to 70-odd kilos of person resting on it. The brushed aluminium frontispiece also curves around the left edge, where it meets the plastic rear, giving the Pocket Reader a solid, quality feel to it that the Kindle arguably lacks. We’d be loathe to call the Pocket Reader a nicer device to use, as such distinction is too open to personal preference, but it’s inarguably a handsome machine.

Almost the entirety of the front of the device is given to its 5in, 800 x 600 pixel, E-Ink display which will show 16 levels of grey. This generation of Sony Reader brings the touchscreen seen on the PRS-600 down to the entry-level Pocket Reader. As a result, there are fewer buttons on the device which now has just forwards and back page turn toggles, a home button, a ‘zoom’ button (which actually lets you change font sizes rather than zooming in on anything) and an ‘options’ button, the function of which is context-sensitive. The Reader Touch also has a stylus, which isn’t always necessary but occasionally proves useful. 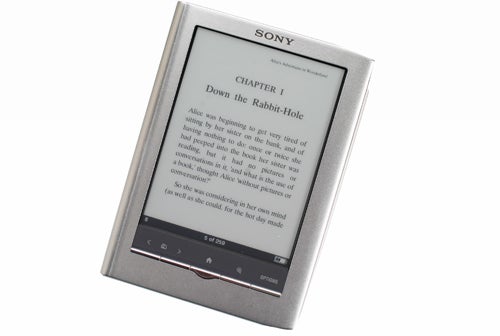 The touch-sensitive interface works entirely intuitively. On-screen icons are all large enough that there’s no problem with accuracy; prods and pokes always do what you expect. There’s a swiping gesture to turn pages, which works well. The only downside is that because of the nature of the E-Ink display technology, there’s always a slight delay in the realisation of what you’re asking the Pocket Reader to do. Page refreshes are about as fast as turning a page on a real book, however, and certainly swift enough never to impede the reading of an eBook.


The delay is more evident in the drawing application. Although it’s possible to draw with good accuracy, especially using the stylus, it’s slightly disconcerting having to wait half a second for the result of your last gesture to show up on-screen. An even stranger effect is seen in the Text Memo application, where taps on letters are registered as fast as you can type them, but the animation on screen shows each letter highlighted sequentially.


That said, while initially distracting it doesn’t take long to acclimatise to this behaviour, and it’s never actually a hindrance to using the device. Moreover, as it is the touchscreen that enables the Pocket Reader to reduce its button count, without sacrificing functionality, we thing it’s a fair trade.


The screen itself is the highlight of the Pocket Reader. Its small size means that although it has the same resolution as most of its contemporaries, it has a noticeably lower pixel-pitch. More accurately, the individual pixels are small enough to be unnoticeable; which unsurprisingly couples well with the E-Ink technology to make text shown on the Pocket Reader extremely easy on the eyes.

What’s more, unlike with a book, small text on the Pocket Reader isn’t an issue, as you can simply increase the font size if you so desire. Obviously that’s not a feature unique to Sony’s eBook reader, but the pixel-pitch of the PRS-350 helps stop large text looking aliased, which is a definite advantage.


Images look excellent on the Pocket Reader, even converted to black and white. The option to set any image saved on the reader as a screensaver is pretty neat, albeit also fairly pointless. One advantage this Sony eBook reader has over the Kindle is its handling of PDFs. While both have no problem displaying full pages, even with images embedded, the Reader Pocket will also reflow text if you increase the size above what the PDF’s creator intended. As such reading text-based documents is much easier, as there’s no need to scroll about pages to read them.

Another advantage the Sony Reader Pocket has is its support for EPUB-formatted eBooks. While software such as Calibre will happily convert EPUB files to a Kindle-supported type, they have to be DRM-free (or stripped of it illicitly). The Sony Pocket Reader, conversely, supports Adobe DRM and as such will display EPUB books with no fuss or bother.


However, while it’s a shame that Amazon Kindle owners can’t easily access non-Amazon eBook stores, it’s a major annoyance that Amazon eBooks are incompatible with the Sony Reader. Because if there are two things that Waterstones, WH Smiths and their ilk have in common it is that their eBook stores are, first, woefully under-stocked and, second, horribly overpriced. Although it’s entirely possible to find cheap eBooks, finding a selection that you’d want to read is another matter.

There’s no ‘Sony Reader’ iPhone app to browse these purchased books on, either (as there is for the Kindle). Having the ability to carry on where you left off on your iPhone or iPad is a real boon when stuck for entertainment and without your Kindle.


You have to manually load eBooks onto a Sony reader, unlike the Kindle which accesses Amazon’s online repository either over Wi-Fi or 3G. Admittedly Sony’s Reader software is pretty simple to use, and it’s stored on a separate partition of the Reader Pocket’s 2GB of memory so you’ll always be able to install it on a PC (Windows or Mac) if required.


The very fact that you need software to authorise transfer of DRM-laden eBook will be enough to turn some people off from the Sony reader. There is one advantage to this otherwise dire state of affairs, though. Because it supports DRM, the Sony Reader Pocket can be used to read eBooks loaned from a public library.


The number of libraries in the UK offering eBooks is still limited, and the management of digital copies is still hilariously archaic, but that the ability to ‘borrow’ digital copies of books for free is there at all goes a massive way to compensating for the frankly abysmal options for purchasing eBooks for a Sony Reader. 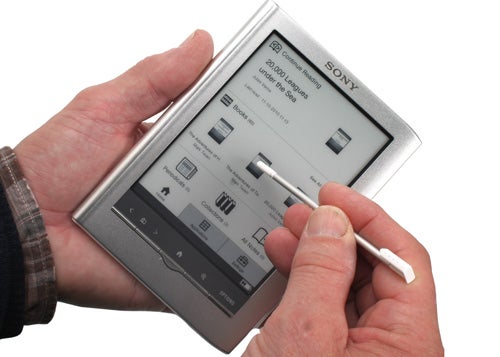 Hopefully in the future libraries will be allowed to offer more than two or three ‘copies’ of an eBook for hiring at a time, or allow users to select a shorter loan period than two weeks, making copies available sooner than currently. Ideally people would be able to return books as soon as they finish reading them, but without an Internet connection on a Sony Reader it would be hard to verify the removal of a finished-with loaner eBook from a device.


But we digress. The salient point here is that although the Reader Pocket ecosystem has its merits, Sony simply can’t compete with Amazon yet. Put simply, if the choice between the devices were down to the hardware alone, we’d have a tough choice on our hands, and would probably hand the Reader Pocket the advantage. But looking at both companies eBook reader offerings as a whole, Amazon’s simply outclasses Sony’s by a country mile. That the Kindle is also a cheaper device just adds insult to injury.


Despite its attractive form factor, excellent display and intuitive touch-driven interface the Sony Reader Pocket can’t quite compete with the Amazon Kindle. Whispernet not only makes managing eBooks easier, the Amazon eBook store is also more comprehensive and cheaper than those available to Sony Reader users. Given those considerations, as much as we like the Pocket Reader, we simply can’t give it an outright recommendation.