The £260 F886 is the first Walkman to sport the new Hi-Res Audio badge Sony has introduced in a bid to wake more people up to the joys of higher-quality music. Which actually makes the F886 pretty important as portable music players go. But is there more to this Hi-Res Audio thing than just a label? We’ll explore that exact question in the process of reviewing this rather unsual MP3 player. 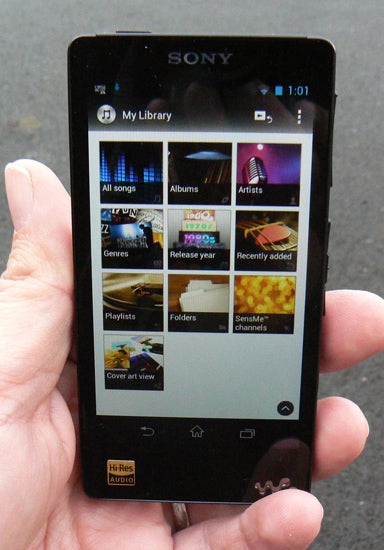 The F886 looks quite nice. Part of us thinks we should be feeling a bit more enthused than that by its pocket-friendly size, glassy front and tasteful matt black rear. It feels quite premium in your hand, too. But there are just so many attractive rectangular hand-held devices around these days that we just couldn’t find anything that really made the F886 stand out. Aside from the Hi-Res Audio sticker stuck rather unceremoniously on in its bottom left corner.

There’s a simple power-on button on the top edge, with a volume rocker switch and skip track and pause/play buttons on the right hand edge (such ‘hard’ buttons are always a winner so far as we’re concerned). The bottom edge houses the 3.5mm headphone input, and a wide, slim USB cable slot.

Handily, though, there are also non-physical connection options with the F886. It’s a Web-enabled device able to connect via built-in Wi-Fi, or else you can set up standard Bluetooth or NFC connections. The necessary NFC sensor is on the rear panel, its exact location indicated by a little N logo.

The wireless connection options can be used for communicating with external wireless headphones and speaker docks, while you can use the Wi-Fi system for downloading apps since rather handily the F886 operates on the Android (4.1) platform. This makes it capable of being far more than just a high-res music player, as you can load any number of apps and games onto it if you so desire.

The F886 uses the inevitable touch screen interface, while its headphones are in-ear designs supplied with a selection of different ear bud sizes to help you get the most comfortable and stable fit.

The 11cm, 854×480-pixel touchscreen is excellent. It’s a Triluminos-enabled TFT display delivering a wider spectrum of colours than the majority of screens, and it’s also bright and crisp. It uses an OptiContrast panel, too, meaning the touch panel has been set closer to the LCD panel so that its image holds up better in direct sunlight. Yet crucially this improved image quality doesn’t stop the screen from also feeling suitably responsive when dealing with your finger presses and movements.

Our next stop on the F886’s feature list involves finding out what makes it a ‘Hi-Res Audio’ device. The main point is that it uses a brand new S-Master HX Digital Amp that’s been developed specifically for this Walkman that reduces noise and distortion across all frequencies.

The other key Hi-Res trick of the F886 is its apparent flexibility when it comes to audio file format compatibility. According to Sony’s spec sheet, the supported high-resolution formats are FLAC, DSD (used when making SACD discs), ALAC (Apple’s lossless format), WAV, and AIFF.

One philosophically curious decision (though it’s understandable from a pricing perspective) is Sony’s provision of a normal, not Hi-Res Audio-ready pair of in-ear headphones with the F886. These can’t reproduce enough of the audio spectrum to be deemed worthy of Hi-Res Audio status.

As we discuss in the performance section, this doesn’t mean that you can’t hear any improvement in sound quality when using hi-res files. But it does mean you’ll be needing to add a pair of Hi-Res Audio headphones (like Sony’s MDR-10s, XBA-H1/3s and MDR-1s) to your expenditure if you want to enjoy the full Hi-Res Audio experience, as it were.

Tucked inside the F886’s svelte form is a decent 32GB of internal storage. Though it has to be said that if you decide to follow Sony’s Hi-Res Audio vision you may find that 32GB will disappear faster than you might think. For instance, we downloaded a 9-minute Mozart piece from online Nordic high-res audio retailer 2L in the 192kHz FLAC format, and the file came in at 330MB, versus just 93MB for the 320Kbps MP3 version. The FLAC 96kHz stereo file, meanwhile, clocked in at 168MB.

Given that the world of hi-res audio file formats is still rather confusing (much more on this later), it’s good to find that Sony ships the F886 with 15 high-res audio tracks pre-installed, so that you can immediately hear quality files without having to track some down yourself. Though it’s a pity these tracks are rather eclectic in nature; a couple of up-to-the-minute pop megahits would have really helped sell the Hi-Res Audio concept and assuage concerns over how widespread high-res audio sources currently are.

Turning briefly to other features of the F886, it rather impressively for its money sports a digital noise cancelling system; provides the SensMe system for sorting music according to mood; and is equipped with built-in speakers claimed to deliver a big sound courtesy of xLOUD technology.

It’s good to find that the F886 ships with a more than 50% charge on its battery, so you can get straight down to business rather than hanging around waiting for it to charge. Though having said that, if you want to shift your music onto your new player then you’ll have to connect it to your PC or Mac anyway using the provided charging USB cable.

Initial set up is pretty straightforward, with the four or five steps – many of which are optional Android-related stages – being clearly described and easy to follow. The only disconcerting thing is that the menus keep referring to the F886 as a phone when we assure you that attempts to use it to call your Uncle Ken will result in failure.

How you feel about the F886’s system for getting multimedia on an off it will depend on how you like to organise your music, and whether you’ve got an archived music system set up already. The F886’s transfer system comprises nothing more sophisticated than a window showing a picture of the F886 into which you simply drag the music, photo or video files you want the device to carry.

There’s no iTunes-like content management front-end, in other words. But personally we have to say there’s something refreshingly straightforward and direct about the F886’s streamlined file transfer approach. Adding a separate full interface platform may well have just been an unnecessary extra layer of complication for many people.

One final set up headache many people will be faced with, though, when embracing hi-res audio – especially if they’re already invested in iTunes – will be the actual process of finding and then integrating hi-res audio files into their system. We’ll be getting into much more detail on this later.