Now that Steve Jobs has stepped down as Apple CEO, it’s the perfect opportunity for other brands to try and douse those powerful iPod flames. Sony’s latest entry to the dwindling decicated MP3 player market is the NWZ-E463, a 4GB solid state player that retails for around £70.

Rather than driving the price of this player to an aggressive all-new low, Sony attempts to catch our attention with an array of colourful finishes. Our review model was decked out in a rather fetching lime green pixellated pattern, but pink, light blue, red and black versions are also available – each with its own pattern. 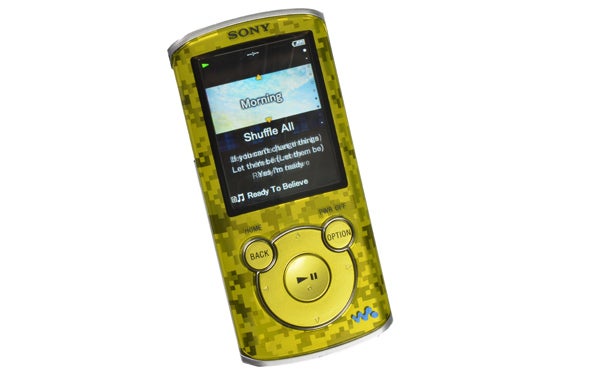 This finish is overlaid with a layer of transparent plastic, giving a pleasant impression of depth to the front of the NWZ-E463. The front nav and playback buttons are also daubed with the same basic colour seen in the main body – in this case lime green. Not so good on a bath or porcelain throne, but perfect for a cheery little MP3 player.

It’s a good-looking device if you want a player a bit more conspicuously fun than something like the Cowon J3. The back of the player isn’t quite as snazzy, though. It’s plastic and finished to look like anodised metal, but scratches fairly easily. If it was made of real metal, the NWZ-E463 would have the high-end feel of an iPod Classic or iPod Touch – but as is it’s left languishing in the mid-range field. It doesn’t feel like a million dollars. More like £70, which is fair enough.

There are a pair of slight disappointments to its design, though. Continuing Sony’s love of proprietary elements, the NWZ-E463 uses a proprietary data transfer socket rather than a standard micro or mini USB, and there’s no memory card slot. You’re stuck with the 4GB of internal memory, which is enough for around 35 albums at decent 192kbps quality. 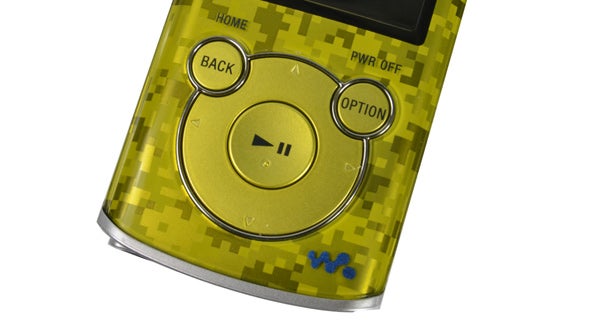 Aside from the front buttons, there are three on-body controls to this player. The left edge houses the standard up and down volume buttons, while below this is the hold switch – which comes in handy once you dump the player into your pocket. 10mm thick and weighing just 58g, it takes up significantly less space than a phone, and is small enough to carry comfortably in-hand while out running. It’s not quite the perfect gym bunny’s player though – you may be better off with a Sony B series or on-ear W series player if sport’s your thang. 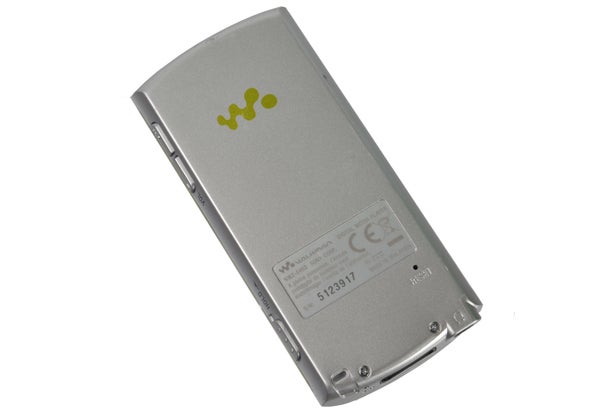 Format support is reasonable, including WMA, AAC and WAV on top of MP3, but without lossless FLAC or APE compatibility it can’t claim to be a real audiophile player. The NWZ-E463 does support photos and some video files, but thanks to the tiny screen both are of fairly limited use. That said, pixel density is pretty high at 200dpi – it’s a 240×320 pixel display, which is not bad for 2in.

Like the design, the software of the Sony NWZ-E463 is fun and exuberant rather than incredibly slick. However, the negative side of this description comes from a comparison to Apple’s players. This interface is comfortably prettier and sleeker than that of Cowon’s and Sandisk’s players.

Scrolling through albums and tracks is quick even when the player’s full and there are tasteful animated transitions between the various menu pages. The basic music interface boils down to the usual fare – you can browse through content by Artist or Album name, Genre or Year. Tiny versions of album covers feature in the albums list too – this is one player that really makes use of a properly tagged and labelled music library. A neat extra missing from some players is the ability to browse through your music folders as they appear within the file system.

While the Sony NWZ-E463 doesn’t have apps or games, it offers plenty of audio-related features. It supports bookmarks, song lyrics and playlists, allows you to record audio from the pinhole microphone on the back in 64/128/256kbps MP3 format, has an FM radio (no recording here though), lists podcasts properly when used with the sync software, and has a wealth of superficial-but-fun modes.

There’s Karaoke, which fiddles with the stereo channel balance to (attempt to) cut out or quieten-down vocals, complete with a key changer option for those tricky falsetto numbers. The DPC speed control is arguably even more useless, speeding up music to 2x or slowing it down to 0.5x normal pace without changing pitch. There’s a use for every odd extra feature though – it comes in super-handy for guitarists trying to learn parts, for example, and is nestled in an easy-to-ignore options submenu if it doesn’t appeal.

The piece de resistance of the NWZ-E463’s sillier features is SensMe. This analyses all your tracks – it takes a few seconds per song – and fits them all into nine different moods.  These are Energetic, Relax, Upbeat, Mellow, Lounge, Emotional, Dance, Extreme and Morning. It had a remarkably good stab at this too, and the interface is pretty and intuitive. It dropped Tim Hecker into Mellow, Kanye West’s beatier bits into Dance, Smith Westerns’ poppier songs into Upbeat and some of Four Tet’s more chilled numbers into Relax. Extreme was largely a mystery, but then we didn’t load the player with any black metal, this time.

SensMe analyses the tempo and dynamics of each track to split them into group. It’s science folks, no wonder it works pretty well.

The categories seem to overlap to us – what’s the difference between Relax and Mellow? But for those of you who, like us, aren’t patient enough to make playlists for every occasion, it’ll come in useful – if only for when you can’t stomach much more than a chill-out session.

In the past we’ve criticised Sony’s seeming obsession with these odd, often superfluous additions – the NWZ-B162’s Zappin’ feature standing out as a low point – but here they’re entirely inoffensive. And each has valid uses that’ll act as powerful reasons to buy for some.

The interface isn’t without a few niggles though. While you can browse the menu system when playing music, you can’t do so as you listen to the FM radio or a podcast. Try to back out of their specific areas to the main menu and playback will stop. Drat.

Sound quality is very important to us, but the truth is that most digital media players are very accomplished performers these days. There are much greater differences between sets of earphones than there are between two mid-range MP3 players.

The Sony NWZ-E463 has a reasonably warm sound signature, but doesn’t particularly elevate itself beyond the standards of the iPod Classic. Sound quality is perfectly good though, deserving of coupling with a great set of headphones. 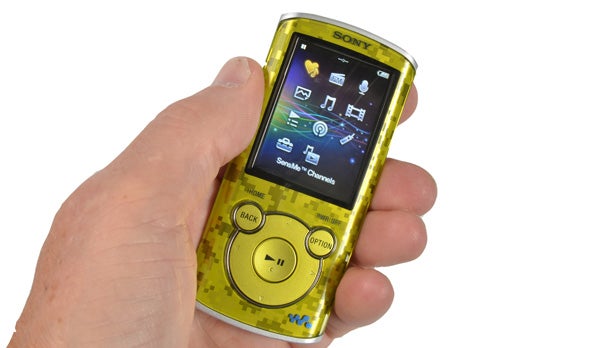 Just as the player lays on a wide selection of bizarre-o modes to play with, there’s a spread of sound customisation options. The equaliser function has four preset modes – Heavy, Pop, Jazz and Unique – and two customisable settings. These give you control over five frequency bands, with -3 to 3 modification for each, and 0 to 3 control over the Clear Bass low-end booster.

The equalisation is fairly low-key, giving a subtle adjustment that never makes the sound harsh or ugly. It’s not a patch on the powerful EQ system found in the Cowon J3 and X7, but it is a step above the norm. And better than that of the iPod Classic. It’s worth noting that the NWZ-E463 doesn’t go hugely loud though. If you’re on a self-destructive one-way trip to early hearing loss, this player won’t speed-up your journey. 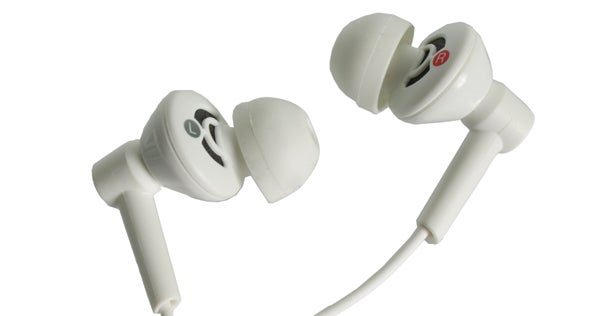 What makes the NWZ-E463 a good overall sonic package, though, is the decent noise isolating earphones thrown in. They are EX-83 models, and although they’re not available to buy separately, they are aesthetically most similar to the MDR EX-85LP. While we didn’t have that £20 pair to compare directly with, they sound a lot better than most bundled sets.

They’re bassy and warm, while mostly avoiding the harsh top-end we’ve heard in some of Sony’s MDR headphones. Sennheiser’s CX300 earphones sound better but otherwise they can stand up well against £20-30 sets. The treble doesn’t sparkle as much as the best, but they work well as an all-day-long set.

Add this decent audio performance to a 50-hour battery life and the Sony MWZ-E463 emerges as a great choice if you want an all-in-one package that doesn’t look quite like every other MP3 player out there. We do wish it has expandable memory, but the improved interface, quirky extra features and decent earphones make it a better bet than the SanDisk Sansa Fuze.

Not quite cheap, but definitely cheerful, the NWZ-E463 combines a natty design with a good-looking interface and a wealth of music-related features. There are some significant bits missing, such as lossless format support, expandable memory and a standard USB connection, but this won’t bother everyone. The key to this player is that, thanks to its thumb-friendly physical controls, pleasant interface and decent earphones, it’s a device that’s enjoyable to use.