The NWZ-B162 is another one of Sony’s budget stick MP3 player models. Virtually identical to the NWZ-B152 before it, and not too far removed from 2009’s NWZ-B142F, its release isn’t going to set pulses racing but it is one way to get a portable MP3 player without spending too much cash.

The NWZ-B162 is small in size and high on convenience. Its coloured end cap hides a full-size USB socket, letting you plug this player directly into your computer, just like a flash drive. Once plugged-in, it acts much like a memory stick too, letting you drag and drop files directly into the player’s file system. It’s a style that fits well with the limited 2GB memory. This will hold around 20 albums, so will require frequent hook-ups with your PC unless your on-the-go music collection is very limited. 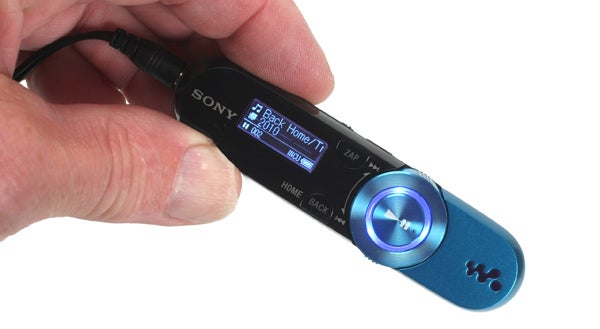 Low price, low 28g weight and the supplied clip, which is an optional extra that slots into the back, cast this player as a good match for sporty types. The quick charge function comes as a huge bonus here too, supplying enough battery life for a long workout after just a 90 second charge. Total battery life isn’t impressive by today’s standards, at 18 hours, but not having to worry about the “Battery Empty” message just before heading out for a run is a blessing.

The rotary dial is the main navigational tool of the Sony NWZ-B162, which also works for gym bunnies as it’s easy to find and operate without a single glance at the player itself. One part isn’t so well-suited for an active life though – the USB end cap.

There’s some friction to keep it in place, but that’s it. Give it a light yank and the cap comes off, with nothing to stop it from bouncing away under a bed, down a drain or under the wheels of oncoming traffic. It’ll work without the cap – it’s just a piece of plastic – but then the NWZ-B162 won’t look and good and won’t handle the elements quite as well.

Selling at £30 though, this is a player to use and abuse rather than cherish. This is something that seeps through into the design, whose sense of style is supplied as much by that all-important Sony logo as the shiny colourful elements. It’s functional, not luxurious or desirable like the pricier, less compact Sony A845.

Although diminutive, the Sony NWZ-B162 does have a screen. It’s monochrome, of pretty average quality and can display three lines of text. The backlight sets off like a solar flare when viewed from extreme angles, rendering the display unreadable, but head-on it’s crystal clear and enables proper navigation of your music library. 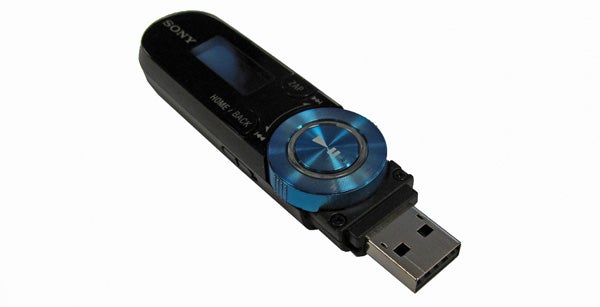 Tracks can be browsed through using the standard ID3 tag system, by Artist, Album or Year. Playlists are supported too and the player automatically adds tracks to its internal database as they’re transferred. The speed at which the NWZ-B162 will suck up new tracks is unremarkable, at around 6MB/s, but as this is a 2GB player with no expandable memory it’s not a deal-breaking issue. It’s just a reminder that this isn’t a high-end device.

The interface exudes this sensibility too. The jog dial is used for most navigational duties, but works in a counter-intuitive manner at times. Twitching the dial right navigates up lists, and left down. This feels contrary to what you’d expect – making the first few days of using the NWZ-B162 awkward. Apart from dealing with a cramped screen and tricky dial, the interface is simple enough not to cause any problems.

A bass boost and rudimentary equalisation options are available within the Settings menu, but are unremarkable. The boost tends to lead to a bloated low-end and the custom EQ settings aren’t sophisticated enough to allow for refined sound customisation. We didn’t experience any distortion from our experimentation with these settings though, which is a boon at this base budget level.

Sound quality is good at the price, although even at maximum volume with AVLS (automatic volume limiting system) turned off, the NWZ-B162 is relatively quiet. We were perfectly happy with the levels on offer, but if your earphones aren’t easy to drive this isn’t the player for you.

This output level issue seems odd to us, because the sound snippet that’s piped through when the Zappin shuffle function is enabled is pretty loud. Zappin is the one embarrassing feature crammed into this player. Its aim is clear enough – to give you a few seconds of tracks one after another so you can find the one you’re after easily. However, each one is accompanied by a juvenile whoosh sound effect. Bookending each Zappin session with a clip of an American woman saying “Zappin’ in” and “Zappin’ out”, like an extra from a Michael Bay film, catapults the NWZ-B162 into embarrassing ridiculousness.

Keep your finger away from the Zap button though and the Sony NWZ-B162 remains a simple, convenient player. The lack of an FM radio is a little disappointing when one featured in the previous NWZ-B142 model, but that won’t matter to everyone. The one additional feature the player does boast is voice recording. There’s a microphone on the back, which is handy for recording interviews and lectures. Quality is only good enough for the most casual recordings, and there’s no way to use an external microphone, but it’s a welcome addition to such a cheap player.

At this low-end point, the Sony NWZ-B162 has to compete with both white label MP3 players that offer more storage for the same price and the Sandisk Clip, with its larger screen and expandable memory. Thanks to its decent sound quality though, this is still a solid choice for sporty types.

A simple, few-frills MP3 player that’s well-suited to gym bunnies and runners, we wouldn’t recommend using the NWZ-B162 as your primary MP3 player, but it makes a solid backup. It’s ready to give you a burst of a couple of hours playback after just a few minutes of charging and sound quality is decent at the price.