As an entry-level portable player the NW-A55L delivers an entertaining experience with a detailed and natural-sounding Hi-Res audio performance. The lack of Wi-Fi is disappointing, but if you're looking to step into the world of portable music without incurring the cost of an Astell & Kern, this is a great little player to start with.

The NW-A55L is the latest in Sony’s Walkman range, bringing Hi-Res audio fidelity for under £200.

If anything, a smartphone highlights the value of a portable music player even more. The circuitry in smartphones has to contend with all sorts of processing and noise that competes with audio playback. If you’re a music fan and want to hear your collection in bit-perfect playback, a dedicated music player is your best bet.

Sony quietly introduced the A50 Walkman series a few years ago and the NW-A55L arrived in 2019, bringing Hi-Res audio to a pretty affordable price.

Sony’s more affordable players have dropped the chunky aesthetic of the premium models and gone for a diminutive and slim form factor. Measuring 55.7 x 97.3 x 10.8 (HWD) mm and weighing 99g, it slots easily into a trouser pocket (alongside your smartphone, if need be), and its curved body is designed to make it easier to hold in the hand.

The weight ensures the NW-A55L is light, but it’s also strikingly well-made. The housing is made out of aluminium, which has a benefit for audio as the milled frame offers increased rigidity for low impedance and more stable sound. 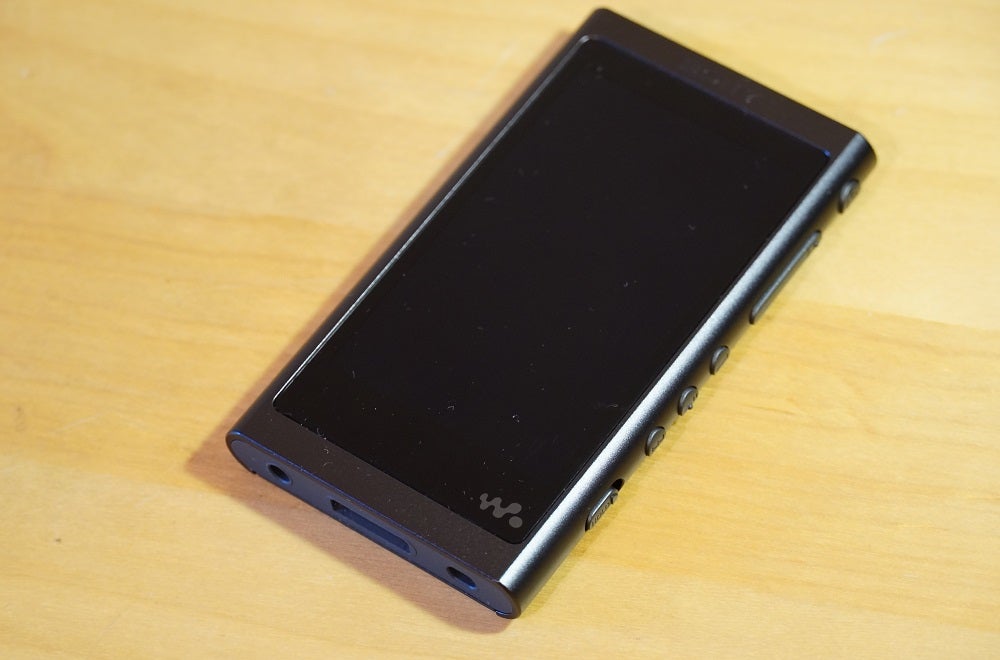 The player is waterproof, which doesn’t mean you enjoy your tunes in the bathtub, but does mean you can listen to them in the rain. The display is a 3.1in TFT colour display with an LED backlight and a resolution of 800 x 480. It’s bright enough to see the album cover and read text, even in the glare of the sun.

Controls and buttons are located on the right-hand side, which includes power, volume, screen lock and play/pause. On the left is the SD card slot. There’s no scrolling wheel function of the kind you’d find on players from Astell & Kern or FiiO. It also comes in five colours: red, green, gold, blue and black.

Battery life is a maximum of 45 hours (MP3/128kbps), and recharge to full is four hours. Sony does say it’s best to charge the player up to 90% rather than full, to preserve the battery’s charge across its lifespan. The NW-A55L doesn’t have a USB-C connection, opting for the WM-Port connection, so there’s no quick charging feature available.

Built-in memory is just 16GB, which will be eaten up rapidly by FLAC/DSD files. Thankfully expansion is possible with either Micro SD, Micro SDHC or Micro SDXC cards up to 128GB. 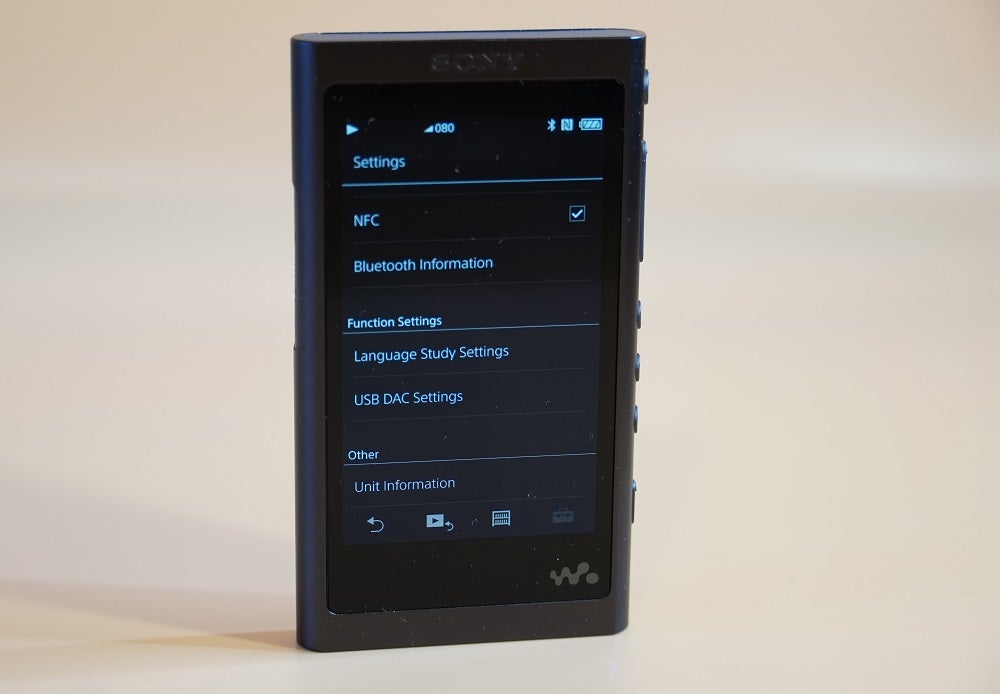 The NW-A55L supports NFC and Bluetooth 4.2, but not Wi-Fi. Bluetooth codecs include SBC, aptX, Sony’s own hi-res LDAC and aptX-HD, and it’s also capable of receiving AAC. For those interested in upgrading from older Walkmans, note the A55L doesn’t have an FM tuner for radio reception.

The interface is functional with not much in the way of flourishes. It is, at least, responsive to touch inputs and the overall design is uncluttered. While there are quick navigation icons at the bottom for access to the current track, settings and library, travelling through the UI is a mostly linear experience. You can, of course, scroll up and down, and side-to-side with the touchscreen.

Alongside standard EQ settings for tweaking audio is the DSEE HX engine, which can upscale music close to high-resolution. Other settings and modes include VPT Surround, which reproduces the acoustics of a particular venue (studio, club, concert hall etc). The Vinyl processor mode recreates the warmth of vinyl playback; the Dynamic Normaliser minimises differences in volume, while the DC Phase Linearizer produces a low frequency response that’s more in line with an analogue amp, giving music a richer tone. 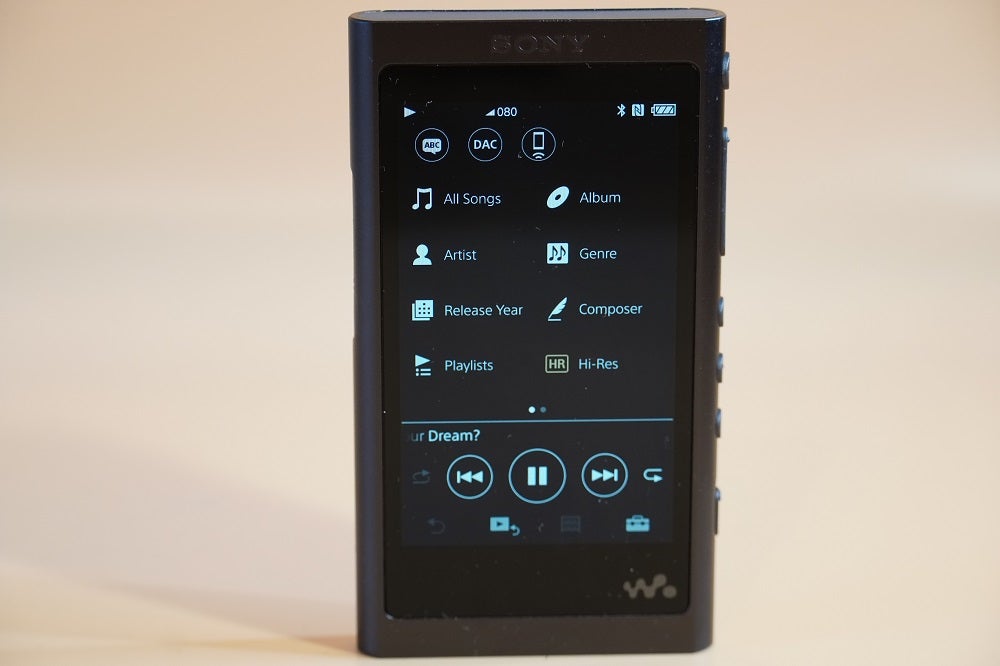 There’s also ClearAudio+. Its activation brings additional processing to the party to make the sound stage wider, fuller and louder. It has a tendency to heighten any artifacts in a track though, and in a number of cases music sounds better without it. It’s worth playing with the EQ settings and above modes to get the best out of the A55L’s sound.

Some settings, such as the digital noise cancelling, are unavailable as that needs the IER-NW500N in-ears. They’re mentioned in the NW-A55L’s manual, but the European model ships without them. They’re currently only available in Asia. 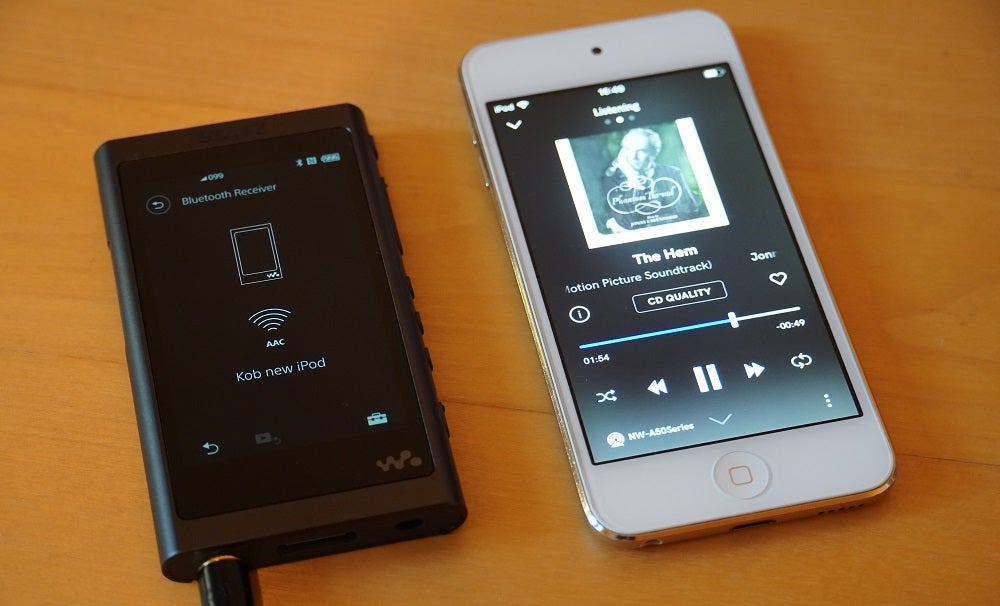 The Sony NW-A55L can also act as either a USB DAC or a Bluetooth Receiver, both of which can be accessed through icons on the front menu. Routing John Williams’ Rise of Skywalker album in FLAC and the presentation was a slight improvement, proving to be lighter and zippier. However, as a Bluetooth receiver you’ll want to avoid using it with an iOS device.

While it can support a LDAC (990kbps) Bluetooth connection, iOS devices neither support aptX or LDAC. Streaming from Tidal and Qobuz on an iPod Touch resulted in the A55L downsampling to AAC, but even so the results were not satisfactory with the presentation thinner, cruder and lacking fullness. The Bluetooth Receiver mode does provide a handy workaround to the NW-A55L’s lack of Wi-Fi, as you can stream to it via another device.

The NW-A55L delivers when it comes to audio. It had a character that was neutral, detailed and nuanced with whichever pair of headphones I used with it. Country Girl from the Wild Rose soundtrack (FLAC) and there’s plenty of clarity and detail on tap, the strength of Jessie Buckley’s voice coming across fully with a sense of intimacy that enriches the vocal performance. 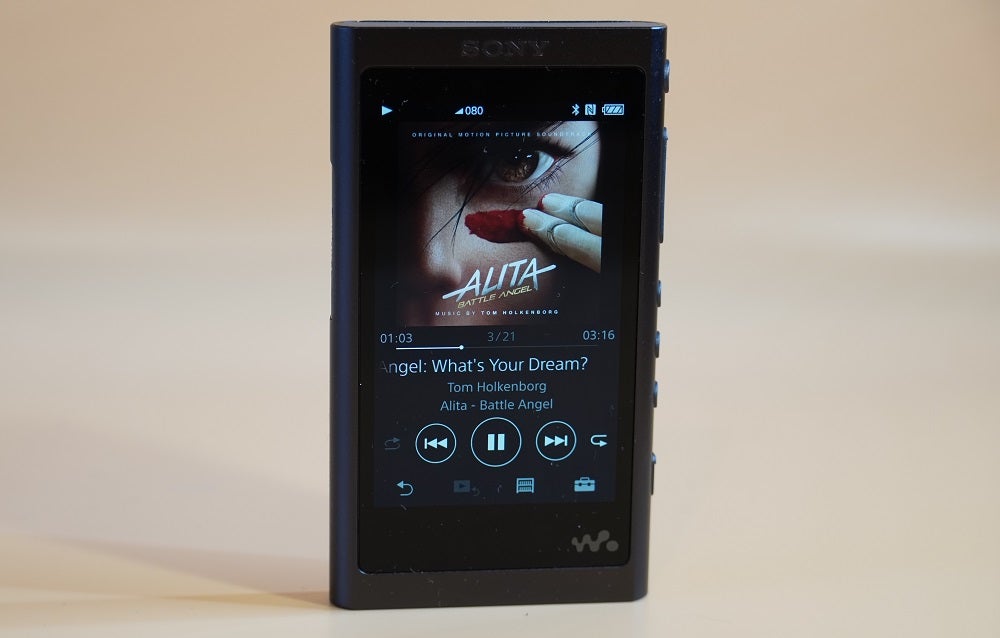 Moving on to Hans Zimmer’s Dream is Collapsing from Inception and the bass wasn’t as explosive as I thought it’d be, but still impactful in its description. Mombasa comes across as thrillingly energetic, showcasing plenty of drive and excellent timing that keeps the track flowing in a compelling manner. The sound stage is convincing in how it’s organised too, and despite the frenetic nature of the track, the NW-A55L grants it a sense of composure.

A listen of Thom Yorke’s Anima album in PCM and Traffic offers tight bass and good dynamics throughout its runtime. Despite the white noise that peppers the track, Yorke’s voice can be heard above the din and centre of stage, with the A55L proving to be exacting in its performance when given higher quality tracks to play with. 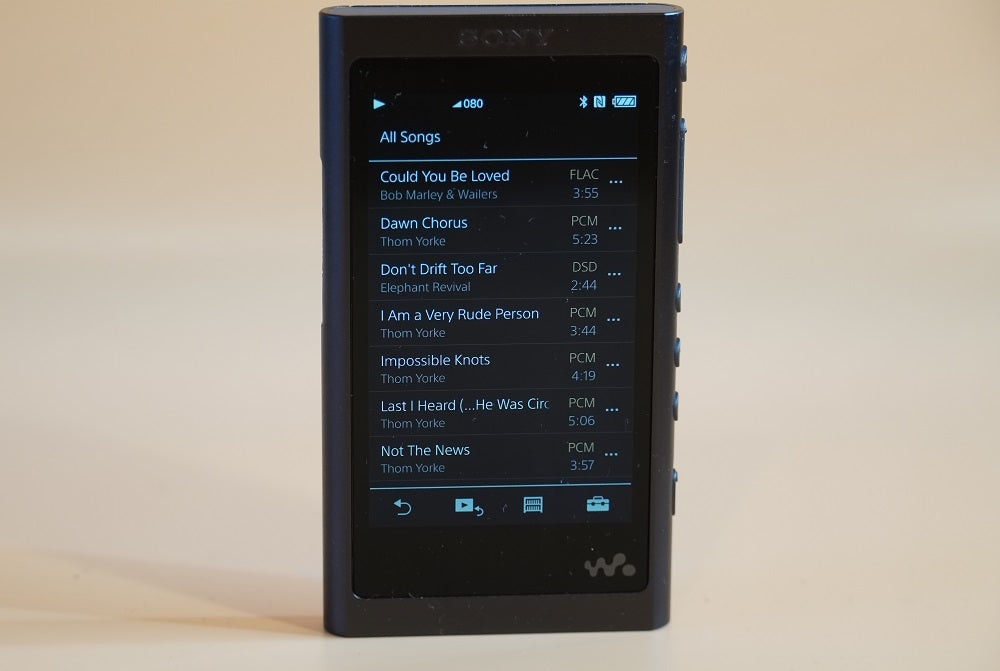 With a few DSD tracks I dabbled with turning ClearAudio+ on and off. While it has its advantages it’s also somewhat inconsistent in terms of its application, with some tracks sounding more spacious with it off. DSD opens up a few more settings in Filter/Gain or fiddling with the Slow Roll Off which has the effect of making music warmer and more expressive. DSD playback was excellent in general, finely detailed with great clarity and naturalism to the performance.

Some aspects don’t quite live up the quality seen elsewhere. The NW-A55L doesn’t quite describe tracks with a great sense of width and depth at times, and its measured approach perhaps lacks a bit of fun. It is, however, a thoroughly enjoyable way to listen to your music collection.

You should buy Sony NW-A55L if…

Sony has a tagline for its Walkman series – for music lovers – and NW-A55L certainly lives up to that ideal. It sounds great, and for those looking to step up from an iPod or cheaper smartphone, the NW-A55L is a great entry-level hook into the world of High-Res Audio.

This is a player purely for those with Hi-Res audio on the brain, and its price makes it an affordable gateway into that world.

You shouldn’t buy Sony NW-A55L if…

It’s not a device to get if you’re interested in music streaming services, as the NW-A55L doesn’t offer any native integration. The Bluetooth receiver does offer the chance to stream from another device, but it’s best to avoid doing this from an iOS device due to the sound quality. There is another choice available in the FiiO M9. It’s a little more expensive, but offers Wi-Fi access and brings access to streaming services with Tidal installed on the player.