My day to day MP3 player is the Sony Network Walkman NW-E507. I love this player, and I feel it was severely overlooked in the market, and too quickly replaced by Sony. However, despite its lack of media coverage, any of my friends who has seen it has instantly wanted one and a couple of them even bought one.


The new Sony Network Walkman NW-S203F is very different. Although it is a similar MP3 player, it is pitched entirely at sporting types, with specific features to help.

Weighing in at an amazing 26g, it’s lighter than my bunch of keys – even the smaller set (house and shed keys) that I usually detach when I’m going riding. It actually feels quite similar to some remote controls I’ve seen with some devices – let alone a player by itself. It’s available in 512MB, 1GB and 2GB varieties – my review sample featured 1GB.


Much like the E507, it uses a three tiered toggle switch for selecting tracks. Pull it all the way to the outside edge and you can select the album (by twisting it like the accelerator on a motorbike). The middle is for selecting the track, and the final position is hold.


The play and stop button is pretty obvious, but also doubles up for selecting options in the menu. I find the button a little on the small side, unlike the E507 which has a much bigger button that is very thumb friendly. Although this is curved in an attempt at ergonomics, its thin feel and harsh edging irritates my thumb. 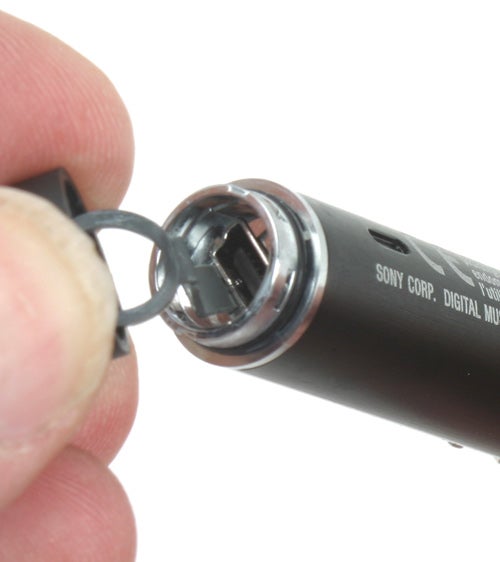 The headphone socket is at the top of the player, by the jog dial. The other end of the player twists off to reveal a mini-USB connector, with the top held on via a tough looking piece of plastic. However, the USB connector is inset into the body of the player which means you can’t use a standard mini-USB cable, it needs to have a slightly longer connector. Looking round the office, I found that we had a good mixture of both varieties, so this is hardly proprietary on Sony’s front. But it does mean that when you go to charge your device at a friends house, their cable might not fit. It’s still better than having a proprietary cable though.

Officially, to get music on to the player, you must use Sony’s SonicStage software. This is bloated, and frankly – anything that requires Windows to be restarted in order to work is alarming. It is very powerful software though, and it does offer functions that many people will want. 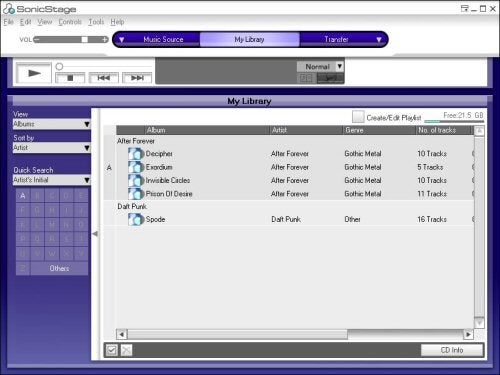 Though it’s good that the player doesn’t require drivers to access it the down side of SonicStage is that you can’t just drag and drop music onto the device.


This contrasts with my own E507. A nifty utility that was available on the Sony support site for the E507 was ‘MP3FM’. This utility lived on the device itself and enabled you to drag and drop music straight on it. This was very handy as it is completely stand alone and required no installation. 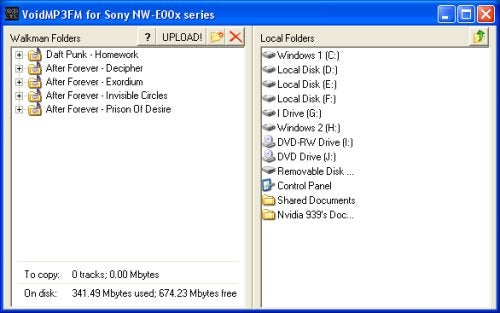 I was disappointed to find that a similar tool hadn’t been released by Sony for the S203F, but a quick search of Google revealed a clone of MP3FM, but with added features. Not only that, but it works with this model. It’s called voidmp3fm and it’s available from drvoid.com. It is worth mentioning that it is not officially supported by Sony, but I’ve had no problems with it yet.


Sony quote around 45 minutes for a full charge, which seems about right. For this, you’ll get around 18 hours of playback, depending on the bit-rate and usage. This is of course charged using the supplied mini-USB cable. As this is a 1GB player, you can only fit a small number of albums on the device – so I expect charging will coincide with the want to refresh the music selection.


One aspect of this player I love, is that unlike the Sandisk Sansa it doesn’t need to be turned off – it is always ready to go. A simple press of the play button and it’s ready to go with no delay. With the Sansa, pressing pause to have a short discussion with a colleague, ends with waiting 30 seconds for the player to turn on again.


Sound quality is what I have come to expect from Sony – simply superb. However, I was disappointed not to find a simple Bass and Treble adjustment, but instead a full blown graphical EQ. For the Shure e4c headphones I use, I find the amplified output a little on the low side. Using the supplied headphones however, there wasn’t an issue and they don’t sound too bad either – with excellent response to bass. For dance music, which I generally find the best music to jog too, a prominent beat is essential. 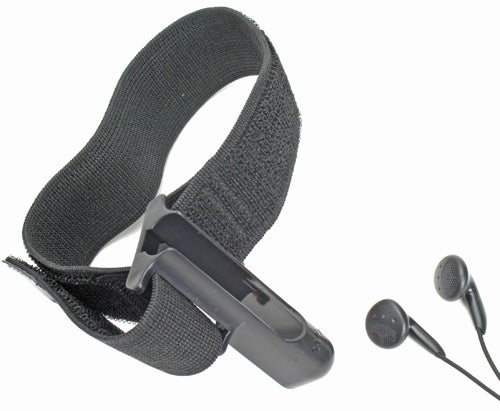 As this is designed for joggers, Sony has included a suitable strap for such a thing. It is a fully adjustable, stretchy, velcro strap. There is more than enough room for even the largest of arms. It’s quite comfortable (I wore it for a whole day without any discomfort). The strap is not removable from the plastic body, but hopefully it won’t get damaged in the wash.


Once fitted to your arm, there is still the question of where the headphones cable should go. I don’t think I’m wrong in suggesting that most of the time, you’ll be wearing a short armed T-Shirt. In which case, running the cable under the arm and out of the neck hole works fine. It certainly works better than having an MP3 player in your pocket as the headphone cable tends to occasionally snag and tries to rip the ear buds straight of my ears.


It does feel like quite a bit of a palaver, just to go out for a jog, but once you’ve worked out a routine it’s quite simple.


The S203F has a “G Sensor” to help monitor your performance while running. In order to get the best out of this, you must input your height, weight and striding distance. It will then be able to tell you exactly how many steps you’ve made, the distance you’ve run (calculated by your measured stride) and the calories burnt.


Setting these options, as for any option is a complete pain. First you most hold down the shared home/disp button to bring up the menu. Then you navigate your way through it using the track selector. Once you find your option and set it, instead of bringing you back to the menu you came from, so that you can adjust the next setting – it dumps you straight back to the currently playing song. A complete pain! However, most of these things will only need setting once and won’t have to go through it again.


Amongst calculating these statistics, you can also set a preset sports mode, where it will play music until you reach your chosen time limit, or chosen distance. There is also a stop watch, so you can time yourself. A quick press of the “disp” button, and it will display your vital statistics – great for mid run, where you want to know how much distance you’ve covered. 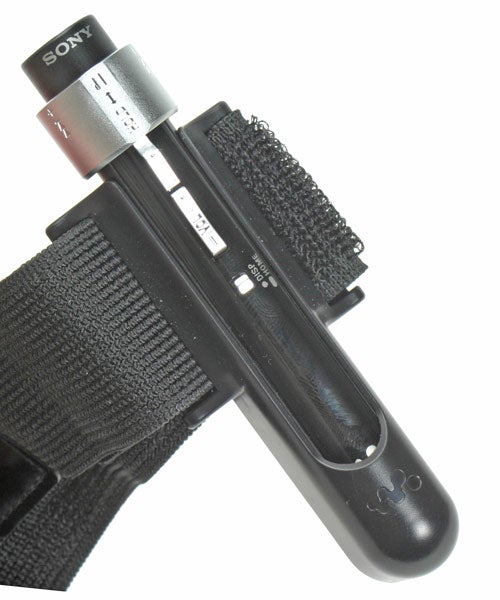 Where the player sits in the pouch, there is no real need for the hold button. It’s really easy just to reach across and change tracks. This is a function that is also useful when riding a bike as well (reaching inside your pockets when riding a bike is difficult).


Once I had gotten over the annoyance of changing settings in the menu system, I actually quite liked this player. It’s incredibly light, comfortable to wear and easy to change tracks, or get information mid-jog. The supplied headphones are good (an usual find) and sound quality is excellent. At £79.99 this an elegant solution, at a reasonable price, though at only £15 more you might want to plump for the 2GB version.